You see,I am a mother without childrenwhich means I have a need -- a physical need -- to feed and dote on others. Andrea was a fine candidate to take my maternal instincts out on, so I quickly invited her over for dinner. and I may or may not have told her to bring her laundry along.

and so it went.

Anyway, this semester Andrea needed to intern somewhere for credit, and so I snatched her up in a heart beat and made her my book tour assistant. She also graciously agreed to let me stay at her apartment during my month-long stay in NYC, with one caveat. I had to feed her. She was diggin' on the idea of having a 24/7 personal chef.

Flash forward to yesterday, it was my first day at Andreas and we were both hungry. Andrea, a college student on a budget, didn't think she had any food I could make for us to eat. That's where I told her she was wrong & I'd come up with something. 8 minutes later, we had lunch.

I started with a small handful of whole-wheat spaghetti, that I broke in half. While the spaghetti was cooking, I dug marinara, olives, leftover chickpeas, tomatoes and fresh spinach from Andrea's fridge. I cut the olives and tomatoes quickly, and tore the spinach into smaller pieces. 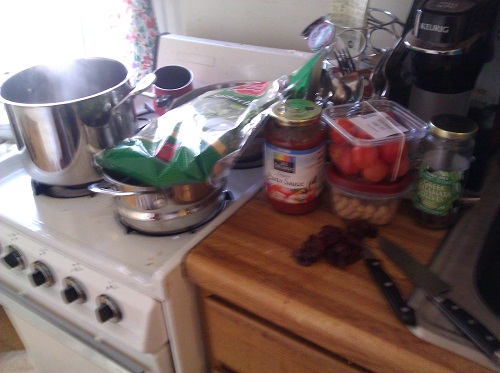 When the pasta was done cooking. I removed it from the water with a fork, then threw the chickpeas, spinach and tomatoes in---straight into the cooking water, to let them heat a bit. Then I drained them and combined everything together with a little marinara sauce. After plating the pasta, I added the sliced olives and called it lunch. 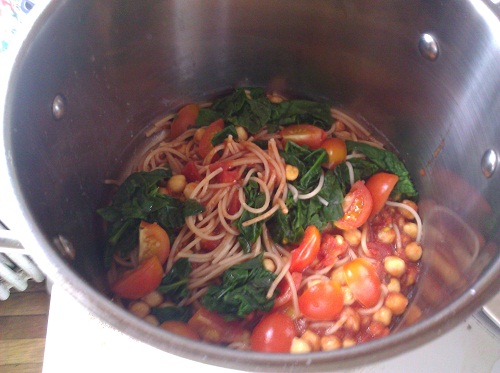 It was a quick, easy, well-balanced and filling meal. All made from Andrea's odds and ends. I can't see what I make on my next "quick fire" challenge.

Andrea is also a much, much more efficient blogger than me ---she posted about our lunch within minutes of it happening, I swear. She also took pictures with a real camera (I used my phone) so you should take a peak at her blog.

Andrea also discovered a bit of history about Puttanesca... apparently it's spaghetti for whores. Hmm....