Today I'm blogging about the Mexican Dip because it's a secret gem in my cookbook--meaning, it will probably get overlooked because of it's unoriginal name... but names are deceiving! This dip is unbelievable! 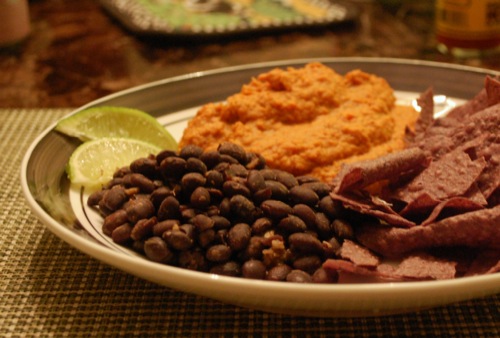 It cheesey--except it doesn't have an ounce vegan "cheese" in it. It's also allergen-free: no gluten, no soy, no corn and no sugar! (It's made from beans!)

Although I designed this dip with parties in mind -- it whips up so quickly that it's perfect during the week when you're feeling lazy, too tired or uninspired: simply throw all the ingredients into the blender and then heat. (Btw, this dip, like most other recipes in my cookbook, uses ingredients you always have on hand--like beans and spices, so it's a great "default" meal!).

As written, the recipe calls for baking it in the oven...though in a hurry this week I tried warming it on the stove instead. The result was an even thicker dip, almost like "nacho cheese" and for a fraction of the cooking time! I still think it's better to bake it--but it works on the stove top, too.