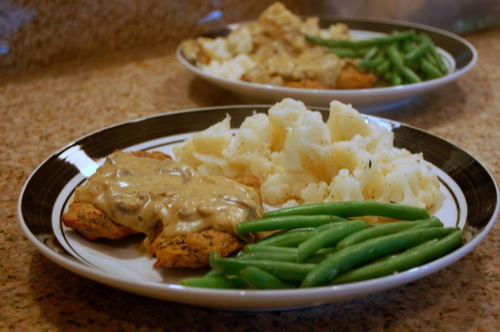 Not too long ago I told the story of my seitan woes. To make a long story as short as possible: I was really sucking at making my own seitan so I set out to make a fool-proof recipe for my cookbook...and here it is. It's a dead ringer for country fried chicken.

In fact it's so chicken-like that my friend Andrea couldn't eat it... that was actually kind of comical. Andrea had come over for dinner and because my tiny NYC apartment only had a table for 2, we sat there and sent Scott to go eat at his computer desk. A few bites in Andrea says "it's all so good" (actually, I believe her word was "amaze-balls") [pause] "but it's kinda freaking me out. It's just so much like chicken...seriously Lindsay, how did you do this?"

Meanwhile, as we were conversing, Scott passed the table--starring with hungry eyes at the uneaten seitan sitting on Andrea's plate. As Andrea and I continued to eat, Scott walked past another three times (mind you, Andrea had only known Scott for a total of maybe 10 minutes) when finally she says "go on, take it" Scott swoops in with one stab of his fork and scurries off.

"You want more...veggies?" I offered. "Yeah, that's be great." she says...and then we both look at Scott who was busy chomping away on Andrea's piece of seitan... I really thought he was going to follow that with the Happy Baby pose. 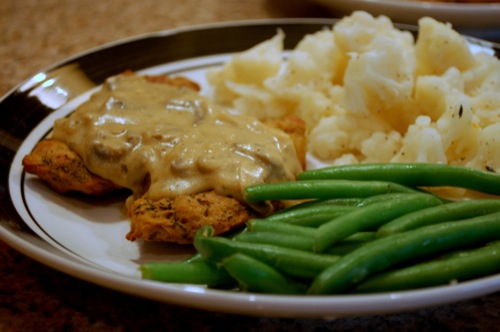 Scott likes this seitan so much (if you couldn't already tell) that he requested it for our anniversary dinner ( yesterday marked our 7th year together) along with a recipe I'm crazyabout... Thanksgiving Gravy.

I'm a gravy-lover by nature---I have food with my gravy, rather than gravy with my food.... I mean, my veggies are practically floating in gravy I drench so much on my plate... so when I tell you this gravy is where it's at and its my FAVORITE gravy of all time, you know it's the bomb diggity. (Do people still say that? Guess so... I just did).