Admittedly, I am not a soup person. I actually went five years (hell, maybe longer) without even a spoon of soup getting past my lips.

I re-discovered soups when I moved to Boston because they were cheap (and I was a poor law student) and they warmed me up when it was impossibly cold outside... so I'm sure it goes without saying that soups were once again a thing of the past when we moved to Los Angeles...

But then we were living in New York City. and it was winter. and I was writing a cookbook. All my testers were begging for soup recipes since they too were all freezing their asses off... but I resisted. By then, I realized I was only eating soups because they helped warm me up... it wasn't because I actually enjoyed eating them... and I didn't want to put just any old recipe in my cookbook -- every recipe had to be one I cherished... one I was proud of... not one I put together out of fear I might freeze to death otherwise... 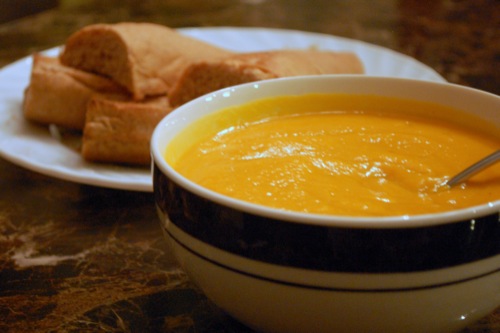 Enter this sweet & spicy butternut soup. I made it randomly one day when I was shivering and in the mood for butternut squash. I was expecting to feel warmer after eating it, but I didn't expect it was for it to single-handily changed my attitude about soups.... I sometimes refer to this recipe as my "gateway soup" because after it's birth, I became obsessed with making really delicious soups (hence the long soup chapter in my cookbook!).

I actually like this particular soup so much that I'll eat it dead smack in the middle of July. I can prove this, too because St. Maarten is tropical - it always feels like "June" here and yet we've had this soup four times in the last 2 months. (Scott is a glutton for it as well).

I love it's simplicity---(just 4 ingredients!) but it also has a great mouth feel and a really nice flavor profile. It's sweet, but has just enough spice to hit you on the back end... It's so velvety too...and a piece of cake to make.... you just throw it into the blender and reheat!

and the good news is, you can get this recipe now through the "look inside" feature on Amazon...go warm up to a big bowl of butternut bliss!