SHOCKER: Tim Ferris wants you to be vegan (no, really!) 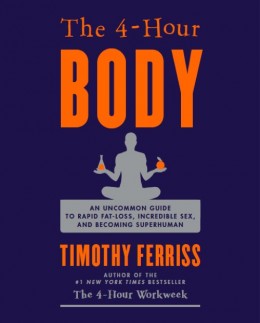 "If you are considering test-driving a PPBD, which I hope you will..." - T.F.

Background: I've been hearing about the 4-Hour Body in one way or another since Tim first mentioned it on his blog. Several emails poured in asking for my thoughts on the Paleo diet (the alleged cornerstone of the book) and if I was going to review the book--so here we are.

Paleo Diet: I could speak for days on the fallacies and problems with Paleo but I need't do that here because the 4 Hour Body diet isn'tnecessarily a Paleo protege. Sure Tim shuns grains (like Paleo) but he's pro-legumes (a non-Paleo food). Is there some overlap? Well sure, but I think Tim calls his diet Slow-Carb for a practical reason: it's not identical to Low Carb/Atkins or it's protege, Paleo.

Sound Nutrition? Tim and I are on the same page with a few key issues: We both think commercial juices are rubbage and that whole foods are the way to go, butTim is anti-fruit which always gives me a cause for concern. He's also pro-oil and well, we know where I am on that.

One thing I found particularly amusing: Tim recognizes milk as a retardant for weight-loss... but why is where we differ: His explanation revolves around some insulin-surge theory (which I'm not discounting); but he then later encourages whey, cottage cheese and some creams. Tim, all dairy is a weight-loss retardant and causes weight gain... because that's what dairy is intended to do! Turn a calf into a 400lb heifer in record time! Der.

Can I do this if I'm lacto-ovo vegetarian?Tim: Meat isn't necessary, but it does make the job easier. Eggs and beans are sufficient to lose weight. (He also goes on to talking about how you really can't shake the last 5-10lbs without eating one of five meals every 3 hours--4 of which contain meat and/or eggs and the other--whey).

This is then supported by evidence presented from his 194 test subjects (he lists 10 as vegetarian and 178 as non-vegetarian..I'm guessing the other 6 are space aliens?) The vegetarians lost 21lbs on average, compared to the non-vegetarians who lost 23.

The problem I have with this kind of "evidence" is that it doesn't take into account where the individuals started from. Since vegetarians have lower BMI's than non-vegetarians perhaps they lost less because they had less to lose?? I really don't know--and except for a passing sentence, there isn't any information on the people who dropped out or whogained weight--and what their diet was. (I wonder, too, if the gainers might reduce the overall averages??)

Ferris Loves Vegetarians: The word vegan did actually slip past Tim's lips a few times, but he ultimately opted to use PPBD (primarily plant-based diet) -- which can mean vegan, vegetarian, pescatarian and flexitarians whose diet is 70% or more plant foods... though the vegan diet is emphasized in the greatest detail... with a transition plan to boot!

However, Tim starts the topic of veganism by saying: if someone becomes vegan, he realizes he needs a B12 supplement, and upon researching B12, he sees that animal liver is a good source of B12, so he then eats grass-fed beef once a week instead of being vegan.

I almost fired off an angry email right then! I mean, that is so nonsensical I don't know where to begin! Especially coming from the same person who pushes supplements in the proceeding 100 pages! (100 pages!) of the book!

Then I turned the page and Tim does a complete 180.

"If you are considering test-driving a PPBD, which I hope you will..." - T.F.

Why Tim, you did get all my emails!

Tim's reasons for PPBD? Environmental welfare. And health. kinda.The "health"aspect is all really complicated, and I hate to say, bi-polar.Tim's message is so conflicting--even his "expert" contradicts himself--but the takeaway message is pro-vegan if you don't buy into the BS too much.

Allow me show you:

In one of his "vegan" chapters, Tim introduces Dr. Beradi (who admittedly I'm totally unfamiliar with). Dr. Beradi enters the picture after Ferris talks about super vegan Scott Jurek (he interviewed him) and Bill Pearl's sexy vegetarian muscles... and Dr. Beradi tries the 4-Hour Body diet as a ovo-vegetarian. and he does well on it, but ultimately concludes "I've come to conclude that vegetarianism can work, but this usually requires the help of a trained nutrition coach... I've also concluded that vegetarianism is a real challenge for the average person. Without meticulous planning and some nutritional guidance, most are doomed to muscle loss, poor performance, and a host of nutritional deficiencies" Umm... no. (My feelings on this subject are here). By the way, even if you are an omnivore, if you are on Tim's diet without supplements, you too will have a host of nutritional deficiencies...(as admitted by Tim). So...yeah.

But then (!) Dr. Butthead--Beradi, follows with this on the next page"Proper vegans tend to eat more whole, natural, locally produced and unprocessed foods than most omnivores. This means things like raw nuts and seeds, whole grains...locally grown fruit and veggies. That's all they eat, so they do it right." Dr. Beradi also affirm that vegans are more eco-friendly--which is Tim's big point for why you should try PPBD.

All-in-all, the two chapters on PPBD read this way--bi-polar--and I can only guess Tim was trying to be objective, but in reality you just want to say "spoken like a true meat eater" in a passive-aggressive tone. (i.e. He rails on soy, pointing out it can mess with your hormones and make you infertile...so how to we explain the population crisis in China, Tim?)

Conclusion: Tim's diet reads a little like an Eating Disorder--if I'm going to be brutally honest. It's obsessively restrictive, with one binge day---but hey! He didn't totally crap all over vegans, which is what we all expected from him, right? (I'm also concerned he approves things like sugar-free jello and Diet Coke...daily!) but aside from all the flaws, there is also great information in there and its presented in a way you not only understand, but won't find terribly boring to read. Is this book and diet for everyone? I'm doubtful--but I'm tempted to try it vegan-style for two weeks as an experiment.

Btw--Tim is wearing sneakers in all his workout demos--don't wear running shoes when you are lifting weights!

Disclaimer: I speed read the book as Tim told me too--namely, I only read chapters that mattered to me. For example, I skipped the chapter re: the 15-minute orgasm because I don't know that I want to experience a 15-minute orgasm..that sounds painful, actually.