For the longest time, I've hesitated to blog. I know that I have a "blog" but I sort of look at Happy Herbivore like a modern day recipe card index that's shared among family and friends-- I don't really see it as a diary or journal the way most blogs are chronicled...

Though in the wake of all this chatter caused by ex-vegans (who claim a vegan diet made them sick) I thought I should provide an example.

Let me back up. I'll just put it out there that have a problem with these ex-vegans using veganismas a 'scapegoat' -- and for arguments sake, even if they aren't using veganism as a scapegoat, I have a problem with them flingling the message around that a vegan diet is unhealthy and "dangerous" so carelessly... especially because it is at the expense of silencing an important fundamental message:

Whether you are vegan, vegetarian, omnivore or a flexitarian, if you fail to eat a wholesome, appropriately balanced diet, you will have health issues eventually.

This is why my message on Happy Herbivore has always been about eating nutritious--wholesome food and not just simply about being vegan. Being vegan is not automatically synonymous with "health."  After all, you can be a vegan and live on coke and potato chips but you won't also be optimally healthy.

However, it is much easier to eat healthfully on a vegan diet than an omnivorous one that is loaded with saturated fats and proteins that science has linked to cancer and other debilitating conditions. (Even the crappiest vegan diet doesn't have that, and any vegan--even so-called "junk food vegans" are still likely to eat more fruits, vegetables, legumes and grains than you're average meat eater.)

And I'm not saying that any of these ex-vegans lived on soda and potato chips---but what I am saying is that there is more to it than boiling it down to veganism. Just as there are vegans who may find themselves with a myraid of problems from there "diet" there are many more omnivores who are sick and dying from their "diet."

Which brings me to another point: I often wonder why it is that there is such a concern for vegans and where they get their calcium, protein, iron, etc--but no one wonders where an omnivore gets their fiber and water-soluble vitamins? And why is there such criticism for the teenager who eats a diet filled with vegetables and fruits--but no judgment is passed on the teenager whose only source of fruit is a juice box and whose only vegetable intake is a French fry?

I suppose this is, inadvertently, my own manifesto to combat the dark shadows cast on the message I (and my colleagues--Gena, Natala, to name a few) have been working so hard to spread, which is that optimum health comes from a balanced diet consisting of wholesome, unprocessed plant foods.

And to return those shadows cast in kind, let me say I find it...amusing that these ex-vegans who gave up their veganism for health reasons are all eating significant amounts of bacon, fried eggs--and other foods that anyone--whether vegan or omnivore--would not be quick to call a "healthy" choice.

So with my long rant over--here is a peek into my vegan diet. In the four years I have been a vegan, my physical and mental health has only improved,but I'll touch more on that tomorrow. 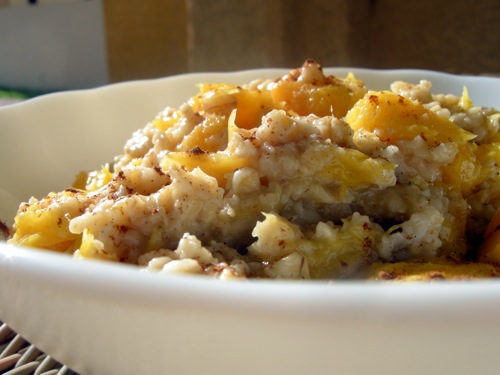 Breakfast always involves a fruit and a grain. For example, we love Mango Oatmeal (recipe coming Wednesday) and protein often finds its way intro breakfast too. For example, Tofu Yogurt is another favorite around here. Scott & I both love "yogurt" with banana slices, oats for a bit of a "crunch" and occasionally, a dab of peanut butter. 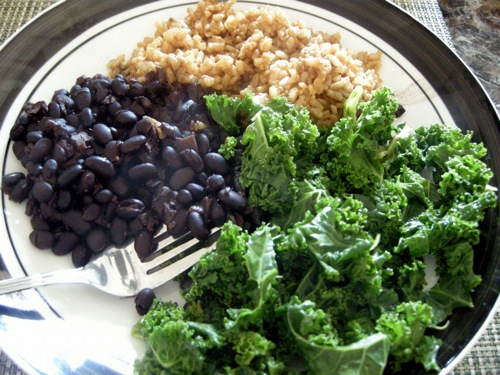 Lunch always involves a green leafy vegetable, proteins and complex carbs. Here in SXM we always eat kale at lunch, but in NYC we often used other greens or we put our protein and carbs over a huge bed of lettuce. (i.e. a jumbo salad with tofu "feta" and whole wheat pita). Kale is more practical/affordable here. 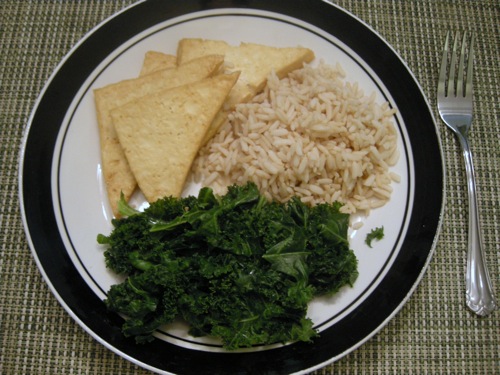 The "protein" in our lunch is always changing -sometimes it's beans, sometimes baked tofu, other times tempeh. I've also done lentils and while we both prefer brown rice, sometimes I'm out and substitute barley or whole wheat toast. Another "stand by" is bean burritos -- whole wheat wrap, refried beans, leftover vegetables, cooked rice and hot sauce. Scott eats 3 burritos, I eat 2. If all else fails, we have PB&J or PB&Banana--though not too often. 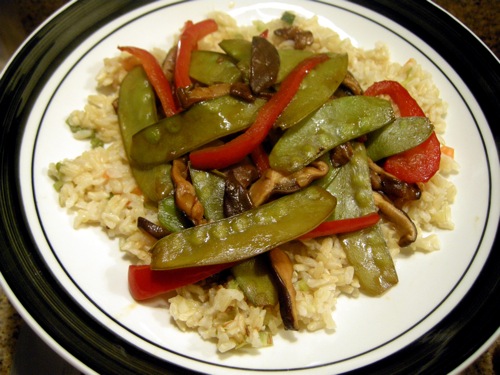 Dinner can be any number of things--most of the recipes on HH are past "dinners" but they always involve vegetables and grains. I'll add protein as I need or want.

Then, throughout the day, we both snack in between meals. I tend to lean towards fruits and vegetables--oranges, bananas, apple slices, baby carrots; where Scott favors whole wheat crackers, trail mix and the occasional banana.

We probably eat more fruit servings than recommended and not enough vegetables--but that's largely due to the fact we live on an island where no vegetables are grown and most vegetables have to be flown in from other countries. Since I feel that you should try to eat foods native to your climate, this leads me to eating more tropical fruit, and less vegetables--though in NYC it was quite the opposite: more vegetables and less fruit.

In the fours years I've been vegan I've never taken any sort of vitamin or supplement, unless you count commercial foods that are fortified such as soymilk or nutritional yeast. I'm a firm believer that everything you need can be obtained through diet and that if you eat a varied diet consisting of natural, wholesome foods--you will get everything you need. In short, I allow the Earth and all its bounty to nourish me, naturally.

Perhaps I just have good luck and thats why I've never ran into any health problem as a vegan---but then again, I had a myriad of health problems as an omnivore, and also as a vegetarian. Of course I'm not going to blame my "diet" totally--sure, I don't think eating meat and dairy washelping me, but I also wasn't making great choices and I need to own up to that. I am eating better--healthier--now, and I have my veganism to thank.