A confession: I cheated with this recipe. It's one of the very few recipes on Happy Herbivore that uses added fat. It calls for a bit of peanut butter, but I'm also including a variation for my chocolate lovers that is "fat-free."

The idea for these treats came haphazardly. James left a comment on HH's Facebook page asking for a pumpkin version of HH's black bean brownies. Since I created a whole-wheat, fat-free pumpkin-brownie recipe last year, I decided to try my hand at pumpkin bars instead. 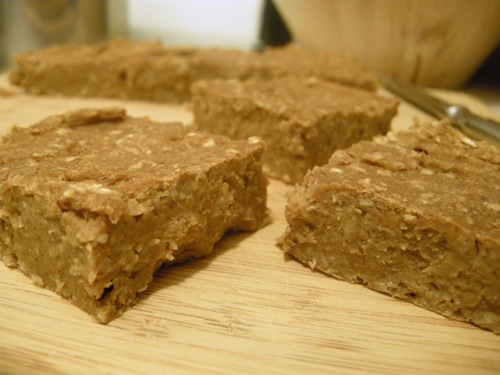 My first batch of bars came out beautifully but I wasn't completely sold on the taste. My friend Heather then suggested I add some of my low fat "peanut butter" (a recipe in my upcoming cookbook) to help mask the bean taste.

Since my cookbook isn't out yet, I decided to use regular ol' peanut butter and success! The pumpkin bars are delicious!

A warning: make these pumpkin bars when you're alone unless you want to embarrass yourself as you lick the batter out of the bowl--it's so good...and addicting! 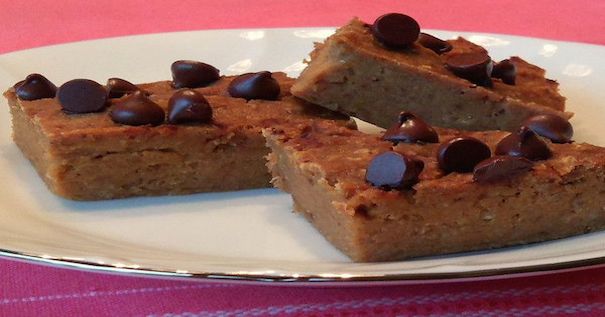 A wonderful pumpkin bar made with beans and other wholesome ingredients. For a chocolate-pumpkin bean brownie, use 1/4 cup cocoa in place of 1/4 cup oats. You can also use black beans for the chocolate recipe to get the right brownie color.

Preheat oven to 350F. Drain and rinse beans. Combine all ingredients except oats (and cocoa if using) in a food processor, blending until smooth and creamy. Stir in oats (and cocoa if using) then transfer to a square baking dish. Bake for 30 minutes or until a toothpick inserted comes out clean and the center is firm to the touch. Allow to completely cool before slicing or eating (the bars firm as they cool). The pumpkin flavor also intensifies the next day (make in advanced if possible).

Note: if you only have rolled oats, send them through your food processor first to chop them up so they are smaller and more granulated like instant oats.