I really shouldn't accept cookbooks for review anymore. They end up sitting in a pile for weeks, if not months, on end, making me feel guilty. (Sorry publishers!!)

I made the Spicy Black Beans from this book, only I added tomatoes and corn because I didn't have enough black beans (and I thought they sounded like a nice addition). I served the beans over steamed kale and true to the book's title, it came together quickly -- about 7 minutes total, not including cleanup. 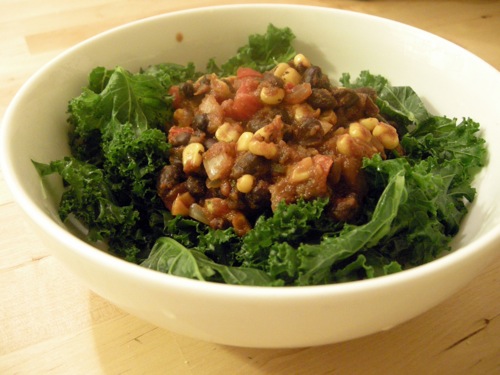 One thing I really like about this book is that the majority of the recipes use all fresh ingredients (even herbs). I find most "convenience" and "quick" cookbooks rely heavily on prepared and processed foods, like boca burgers or faux chicken patties -- but this one does not. It's quick, fresh food.

The recipes arepretty oil-heavy, however, but I had no issues removing the oil from the recipe I tried. The only other thing I want to point out about this cookbook is that it is a "gourmet" cookbook so you'll find most recipes don't call for "everyday" ingredients and the recipes are a bit... unusual. For example, you'll find recipes calling for mung beans, flax oil, walnut oil, macadamia nut butter, mugwort soba noodles, orecchiette and the like.

This cookbook is about what you'd expect from a cookbook that promises to use only 4 ingredients: It relies heavily on store-bought ingredients like pasta sauce, dairy substitutes and frozen foods. However, some recipes do "cook from scratch" and those are the recipes I tried. I made the Cherry Kiss Smoothie, which is a lot like the Cherry Bomb recipe floating around the internet, only without spinach. It was okay. 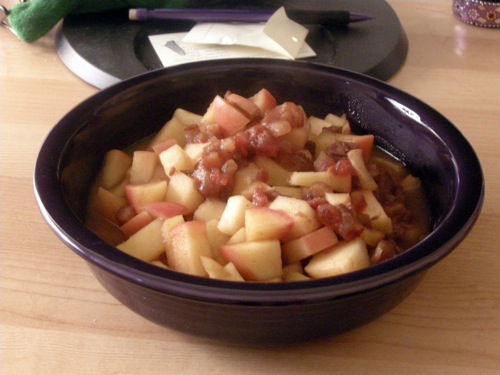 I did like the Hot Spiced Apples, though and was happy to see a "dessert" recipe that used dates instead of sugar. I found the book to be fairly "low fat" overall and many recipes did not use oil at all. I think this cookbook would be good for a student, provided that student has a real kitchen and not just a microwave and hotplate.

Although I've reviewed this book before, I thought I'd post pictures of recipes I've been making from this book since there was so much interest in my vegan dog post. These recipes are easy, inexpensive and the pugs really love them! 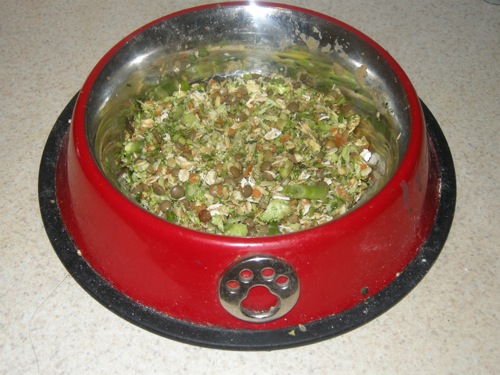 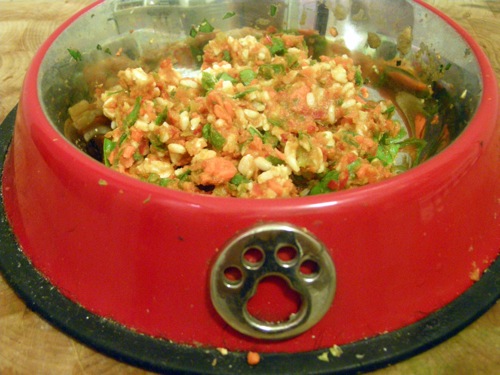 By the way, both of these dishes are stunning when they're made fresh. My photos really don't do them justice. When I tweeted pictures of me making these dishes, many of my followers said they were having to come to terms with the fact they wanted to eat dog food, a predicament they never expected to be in... and, for the record, sometimes I think the pugs eat better than I do!