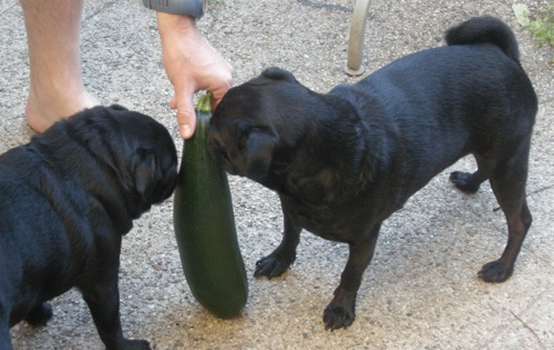 Anytime someone meets my dogs (and they're aware I'm vegan) they ask if my dogs are vegan too. I would have thought the answer would be an obvious "yes" but most often, people seem surprised when I tell them, "yup, the whole family is veg!"

I get the question via email too, so I thought I'd put it out there that yes, my dogs are vegan and they are thriving. 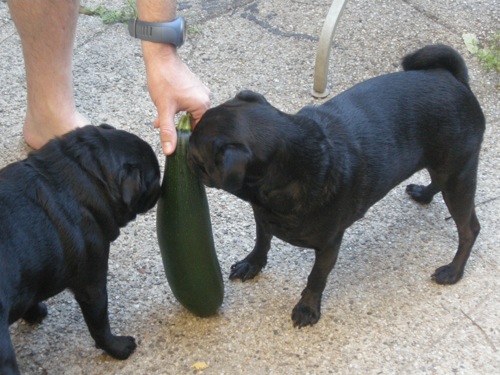 If you're wondering if dogs can be vegan, the answer is yes. Dogs, like humans, don't needmeat to survive. The pugs' vets in Boston, Los Angeles and New York City have all been supportive of their vegan diet and one even said she would recommend a vegan diet over an omnivorous one if she thought more dog owners would be open to the idea.

Although there are several brands of vegan kibble on the market (Nature's Balance, V-dog, Wenaewe, Pet Guard, Avo Derm, Natural Life, Evolution Diet and Wysong) I prefer to make vegan dog food myself.

It all started a month ago when we ran out of vegan kibble at home, and to make matters worse, the store was sold out, too. Obviously the pugs couldn't go hungry so I made them a plate of rice and beans. The next morning I made them a plate of peas and apples and that night, peas and beans. It continued on for days and by the time the store had called to say they had our kibble, I didn't bother to go buy it.

Of course, Scott was skeptical. He wondered how long I'd last at making fresh meals for our dogs every day, twice a day -- but a month later I'm still doing it!

I've noticed a dramatic shift in the pugs since we started on home cooked meals. Although theylikedtheir vegan kibble, they were never excited about meal time. Really, they could take it or leave it. Now they bark and do circles -- they couldn't be more thrilled to eat their supper. 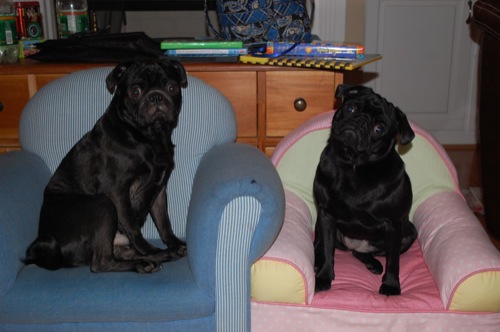 I've also noticed a change in their...bodily functions. The pugs were never constipated or anything, but we always had to walk them around the block a few times before they were ready to do their business. Now, they poop much quicker and with more ease. I'm convinced it's all the added fiber. There is little to no fiber in kibble, so it's not surprising they're going much more easily now.

I've also noticed a change in their urine. Quaid and LilyBean used to have deep yellow pee, which always made me worry they could be dehydrated. Now their urine is much, much lighter in color. I'm convinced its because they're getting water from their food now. Water is in the rice they eat and the beans I cook for them-- vs. kibble which is dehydrated.

By now you're probably thinking "This sounds great, but I don't have the time to cook two meals for myself, let alone my dog!"But I promise, you do -- and it will save you money! I'm spending a fraction of what I used to on kibble!

Here's how I do it: I cook an entire bag of brown rice once a week, storing leftovers in my fridge. I do the same with a bag of beans and I'll steam or bake sweet potatoes while I'm add it. Every day I'll put brown rice, beans and either a sweet potato or thawed frozen peas into their bowl. It takes seconds.

I've also recently started added chopped fresh apples and zucchini from my garden. I also keep a bag of puffed brown rice on hand, and a few cans of beans, just in case I run out. 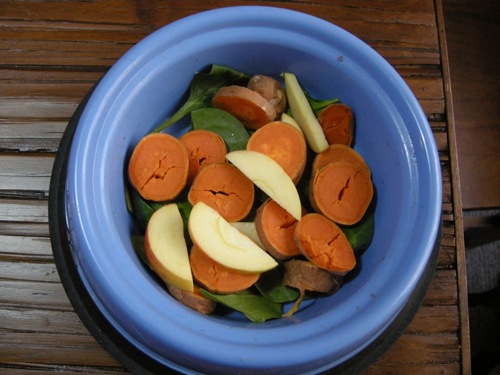 When I started making my own dog food, I was skeptical I'd have the time or energy to keep up with it -- but it hasn't been a problem at all and now it's a habit. I'll put rice and beans on the stove when I'm watching a movie, cleaning the apartment or doing something else. An hour later I have all their food done for the week and I've been known to swipe some for myself, too.

I've also realized that I can thaw frozen peas under hot water in less than 20 seconds when I'm really desperate. (They really love peas!) 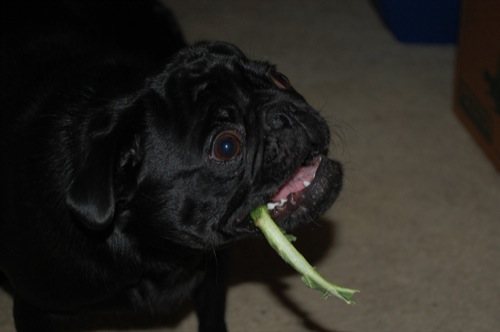 Just be sure to avoid giving your dogs raisins, grapes, garlic, onions or mushrooms.

Perhaps my pugs are the luckiest dogs in the world, at least in terms of their food (they're still envious of dogs with big backyards!) but hopefully with this post I'll convince a few more dog owners to nurture their pets with natural, plant-based foods!

Update:we now live abroad where I have no choice but to feed the dogs home cooked meals. I start with a protein base -- beans or lentils, and then mix in leftover raw vegetables (chopped well), pumpkin (for Lily Bean's eyes) and any leftovers or leftover grains I have, like brown rice. We joke that the dogs are our compost bin. I always make sure to give them a mix and variety -- right now their food is a base of lentils, with bell pepper, cucumber, yellow squash, cabbage, lettuce and cauliflower, plus some leftover rice.

Supplemant: I use veg-e-dog supplement as a proactive measure. The company sends great dog food recipes with their vitamins which I love!