My friend (and past inspirational interviewee!) Natala, created a challenge on her blog, Vegan Hope, to spread poverty awareness and show that you can eat well (and vegan!) on the smallest budget. I was moved and inspired by the challenge and decided to participate for a week. I also wanted to see if eating on $21 a week was possible here in NYC where a carton of soymilk costs $4.59. 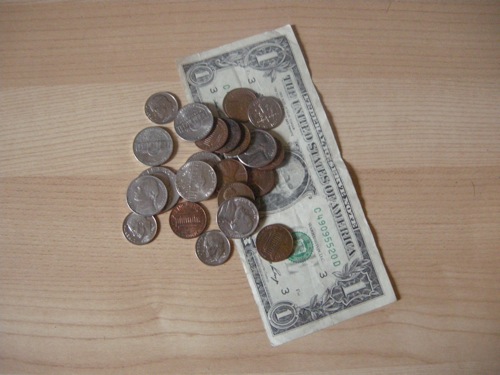 Since I planned to use spices I already had on hand, I reduced my weekly budget to $18 and then I reduced it again to $15 knowing I'd use a tablespoon of flour, a teaspoon of cocoa, etc. here and there. That left me with $15 for the week -- a little more than $2/day. $21 seemed doable but $15 seemed down right impossible... but, I'll risk it all and tell you right here: I did it.

The first thing I realized was that I couldn't just go to one store and get everything I needed. Normally I just buy what I need, regardless of whether it's a dollar or so cheaper somewhere else. I figure, the $1 isn't worth my time... but on this budget? I had to price items, look at sales, check for coupons online and go to five (five!) different places to get my groceries because pennies mattered. 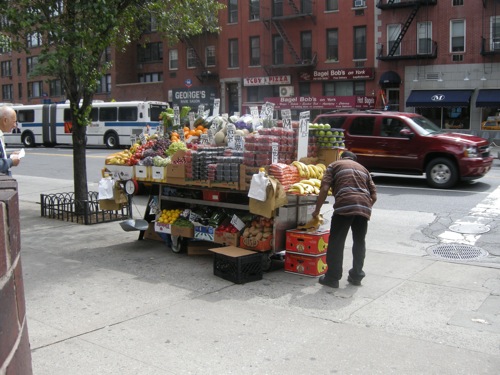 These produce carts are all over New York City and while you're never quite sure where the produce comes from (local? California? Mexico?) you can bet it's not organic. Still, fresh fruit is fresh fruit so I kept the dirty dozen in mind (sorry strawberries--I'll miss you!) and bought whatever was the cheapest. I also went every day and spent only $0.50. Sometimes this meant I could get two bananas. Other days, just 1 apple.

After my 4th daily visit the worker took pity on me and threw some extra (free!) produce into my bag. Who says there isn't kindness, compassion and generosity in NYC? I also relied heavily on my garden for fresh vegetables. During the week I harvested more than 50 cherry tomatoes, 4 zucchini and 1 cucumber which were all essentially free. I also bought some vegetables off the farmer stand. Fresh produce in all the supermarkets was well outside my budget but generic (non-organic) frozen produce was a bargin. I caught a sale at one store and came home with 4 12-ounce boxes of frozen mixed veggies for $3.98 (it was "buy one get one free" at $1.99 each).

I also stumbled across tofu on sale---2 for $1.00! So I ate a lot of tofu, a lot of beans, a lot of frozen veggies and a little bit of fruit. (For the record, 3 out of 5 stores did not sell frozen fruit and the ones that did, it was out of my price range).

On my $2/day budget every meal had to cost less than $1.00 -- and to my surprise (squee!) a lot of Happy Herbivore recipes made it possible (some with a few modifications).

For breakfast, I usually had one of three choices: HH's tofu yogurt, HH's brown rice breakfast or one of HH's smoothies. One morning I had tofu scramble with leftover black beans and tomatoes from my garden---nom! I def. didn't feel like I was eating cheap that day!

For lunch I tried to stick to a salad with beans, carrots and raisins, but I grew tired of the redundancy and started eating HH's zucchini sticks, which were practically free and sandwiches consisting of homemade bread, tofu cream cheese, cucumber (free!) and tomato slices (free!).

Dinner was a stir-fry every night: tofu or beans, with frozen mixed vegetables and a sauce. I kept it new every night by using a different sauce. I tried making an orange sauce, a ginger sauce, I used teriyaki sauce twice and when all else failed: soy sauce. I served it over a big plate of rice. Had it not been summer, I probably would have mixed it up with soups. Then again, had it not been summer, I wouldn't have had all my free, fresh produce, either.

At times I felt constrained (mmm that mango looks good! why is it $2?) but for the most part I found it fairly easy to do -- and I'm convinced had I lived somewhere else, I would have been able to have more variety. If anything, this week taught me the true value of the dollar and how delicious simplicity can taste. I urge everyone to give it a try and if you can't -- volunteer at your local food bank.