Her twitter handle is @coughing_colors. She has a rad tattoo on her chest that you just can't help but stare at. She's beautiful, witty, warm and one of the most captivating people I've ever met...

I've been social with Megan for a while now and shortly after I started my "inspirational interviews" column she offered to share her story in how veganism saved her life. She warned me, though, that unlike previous interviewees it wasn't about weight-loss or beating disease but about the journey of a soul... how going vegan helped her reclaim her mental health and find a way up from rock bottom. 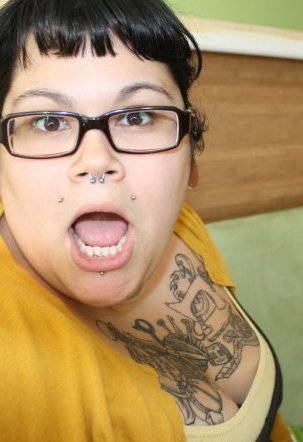 To say her story shocked the hell out of me would be a dire understatement. Today, Megan is so full of life and energy.. to be around her is like basking in the sunshine. I simply can't imagine her any other way which make this interview exceptionally powerful.

When I started this column I wanted to feature interviews of people who changed their life with they changed their diet. I envisioned people the Natala, Candice and Carol who lost weight and beat disease, but also also those like Megan, who remind us not only that mental health is important too, but that when we feed ourselves, we also feed our souls.

HH: First, the million dollar question: How long have you been vegan?

Two years this September, but I had been throwing the idea around for a long time before that. When I was 13 I went to a punk rock show where the band members talked about why they were straightedge and vegan. I thought it was cool how they were trying to change things with their dietary choices and for the next 10 years or so, I always toyed with the idea in my mind.

HH: What stopped you from going vegan sooner?

I never thought that I would have the will power or courage to do it. I've failed at most everything I ever tried to do (i.e. dieting, biting my nails) so I thought, "what makes this any different?"

HH: So what changed?

In August 2008 my boyfriend, Michael, committed suicide. I have bipolar disorder and borderline personality disorder so the the loss of someone I cared so deeply for sent me straight into severe manic depression. I spent most of my days crying with no hope. I cried so hard that I couldn't breathe and my insides actually started to throb in pain. I felt lost, empty, hopeless.

HH: When did things turn around?

A month later at the Syracuse VegFest. I went to help a friend run a booth for a local organic market. I thought getting out of the house would help get my mind off my loss.

HH: What was it about the VegFest that changed you?

The exhibits showing animals suffering really hit home for me. I knew the emotional pain I felt was nothing compared to what they were going through. I felt obligated to spare another living creature for experiencing the pain and emptiness that I felt. I went vegan right then and there... from cheeseburgers to lettuce!

HH: How did veganism help with your mental anguish and emotional pain?

Veganism gave me something else to focus on. It allowed me to look past the sorrow and despair. Plus, knowing I was making a difference in the lives of others made me feel great. It also help me stop eating "raw emotions."

HH: So veganism was very therapeutic for you?

Absolutely. Veganism truly saved my life. I was on the edge, wanting to join my boyfriend six feet under. Going vegan pulled me back.

HH: Aside from becoming the happy, healthy person you are today; Have you experienced any other benefits since going vegan?

Yes! Being a vegan showed me that I love cooking! Who knew! I also realized through veganism that there are a lot of really amazing food choices out there that do not involve death. That aspect really spoke to me. I have experienced enough death; I don't want anymore around me.

HH: Do you feel you are healed now thanks to veganism?

Things have changed and life has moved on, but I am a better person today than I was two years ago. I tribute my success, my happiness, my well being....everything, completely to veganism.

HH: Where can we interact with you further?

Thank you so much Megan for sharing your very honest -- and powerful story with us! It was very brave of you and I can safely say your journey has touched all our hearts.