Today's inspirational interviewee comes to us from St. Louis. Carol aka @HelloMyAvocado describes herself as "vegan, nerdy, cute, easily amused and bursting with fruit flavor" which couldn't be a more perfect description of her. Carol's upbeat attitude comes from her devotion to a healthy lifestyle -- and how it saved her life. 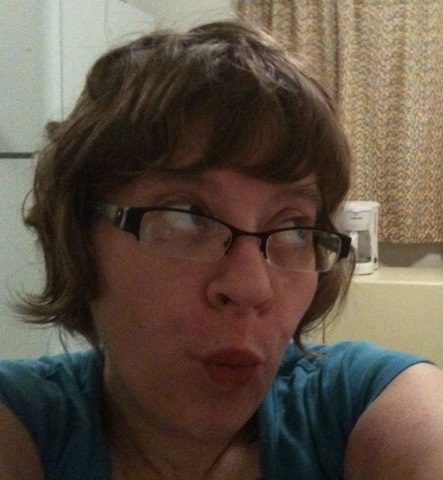 HH: First, the million dollar question: How long have you been vegan and what made you go vegan?

I have been vegan since June 5, 2007. I took what I call the "scenic route" to veganism. It initially started as a decision to get healthier because many of my friends and coworkers were getting diseases like cancer, high blood pressure and diabetes. Since there is a history of diabetes in my family, I knew I had to do something; it hit close to home.

I was morbidly obese and way out of shape.

HH: You've since lost more than 100 lbs! That's incredible! Tell us how you did it.

Losing weight was a secondary benefit to becoming vegan. At my lowest weight (which I'm working back toward) I lost 130 pounds.

HH: How did the pounds creep back on?

The past couple of years have been emotionally taxing; I recoiled and let everything fall to the wayside. I've got to regain some of the territory I've lost and I could kick myself about it, but I've still come so far. One setback isn't going to undue me unless I let it.

I eat a healthy vegan diet and I exercise regularly. I still indulge with fatty and sweet foods but only on days I work out. That way I can combat the extra calories. I can't tell you how many diets I'd previously tried in my prevegan days. Quick fixes don't work. Healthy weight loss come from healthy lifestyle choices.

HH: What role has exercise played in your transformation?

I still remember the moment I realized I needed to exercise. I was listening to the podcast "Fitness Rocks" while making breakfast and thought to myself "Damn. I need to start running." I did a program called "Couch to 5k", it took a while but I slowly improved. I've found exercising helps with my mood, weight and general well-being.

HH: In addition to weight-loss, what other positive changes have you experience since going vegan?

My family is big on fatty, processed foods so going vegan gave me more power over food which I've always had a complicated relationship with. I've also experienced increased energy and less stomach pain. Most importantly, going vegan has allowed me to take control over my health.

HH: You come from an obese family and had a big scare with your mom recently. How much does that play into your dietary choices?

Coming from an obese family can be difficult when its the result of unhealthy lifestyles. It's like slowly watching a loved one kill themselves.  I get upset when I think about all the awful things I used to put in my body. The scare with my mother only cemented my need to get healthy. We nearly lost her from complications of diabetes -- that we didn't even know she had!

My appetite was quite large and I ate the worst stuff you can imagine. I also didn't know how to cook so I (over)indulged with fast food, esp. frozen pizzas. Once I went vegan I learned to cook and saved money -- home cooking is often much cheaper.

HH: When you first went vegan you said you "crunched on fake meats, cakes and cookies" but now you eat a much more wholesome diet, what sparked this change?

Even though relying on processed vegan substitutes isn't a healthy diet it was healthier than what I was eating before. Weight even started coming off which was exhilarating. I knew I was moving in a more positive direction which kept me motivated to keep improving.

HH: What are some of your favorite wholesome foods?

I love cantaloupe but if I'm not careful I could eat all of it in one sitting. I also love broccoli, brocolini, zucchini, onions, yellow squash and salads (provided there isn't iceberg lettuce in it), spinach, and other greens. My pallet has changed over time to accomodate my new way of eating.

HH: You've mentioned having trouble regulating your temperature since losing weight. Mind telling us about that?

I get cold a lot easier but it also takes me longer to get overheated, which is good. I've learned to adjust -- I take a coat with me when it's 60 degrees or cooler. It's also a common symptom to losing weight rapidly (but in a healthy manner!). I think it's a response to having less body fat -- less "insulation."

HH: You call yourself a "proud fatty" and are very open about how you don't care to be thin or slender, just at a weight you feel more comfortable at. How do you determine what weight is good for you?

I am a proud fatty but I also believe that if some one is uncomfortable at a certain weight (plus or minus) they should do something about it in a healthy manner. The lowest I was able to get was 225 and for me, that's a respectable weight. At that weight my body felt better in general. I'm at 254 now and while I don't feel bad, I'm not comfortable.

When your body changes, it changes how you interact with the world. I feel clumsier now than I did. My clothes also fit tighter which isn't comfortable. I don't want to go buy more, bigger clothes because they're expensive and it will only allow me to continue bad behaviors. My discomfort keeps me in check. Of course, I still fully support anyone decision to be whatever size is comfortable and right for them -- these are just my personal opinions about my situation.

HH: Many people assume all vegans are stick-figures like Kate Moss; as a proud full figured vegan lady, care to weigh in on that?

The vegan community has many different shapes, sizes, sexes, genders and sexual orientations as any other group. The idea that vegans are "scrawny" does an injustice to us. I think it's a stifling view that veganism may be unhealthy. I've heard people accuse veganism as a way to mask eating disorders. I'd like more visibility for vegans. I'd love to see beautifully curved women in the media go vegan and help broaden the general view.

HH: This has been an incredible interview Carol! How can we connect with you further?