I woke up at 6:00 am, ate half of a medium grapefruit, slammed a little Vega Sport (love that stuff) and headed to my 6:30 am spin class. (Where I proceeded to drink TWO bottles of water. Man! It was HOT in there!) Afterward I came straight home to have my first raw meal: basic Green Juice from Raw Food Made Easy by Jennifer Cornbleet. 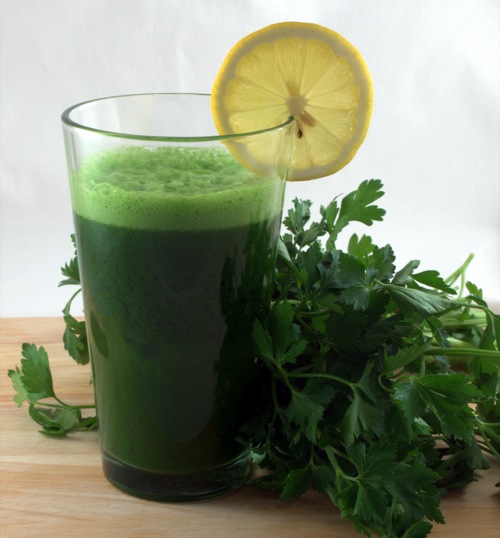 It's a combination of celery, greens and cucumber with a touch of ginger and lemon. I took a sip immediately and decided it wasn't going to happen at room temperature. So I threw in some ice cubes. Ahh.. much better.

It actually took me a while to drink the whole juice -- about an hour and a half. I took my time, though, taking little sips as I went about my work. To be honest, I was surprised at how well it filled me up. I certainly had my doubts..."How on earth was a glass of juice going to hold me until lunch time?" I thought. Especially since I'd just had a particularly hard spinning class! But it did!

Around 11:30 or 11:45 I felt the first twinge of hunger, so I grabbed a big glass of sparkling water and prepared my lunch: California Rolls from Raw Food Made Easy.

These rolls are made with nori, chopped vegetables and little tamari for dipping (I suppose you could also use nama shoyu). I actually found them plenty salty on their own and didn't use the tamari. It was also my first time using my new v-blade mandoline slicer and rolling nori/sushi rolls, but I think they came out lookin' pretty good anyway! 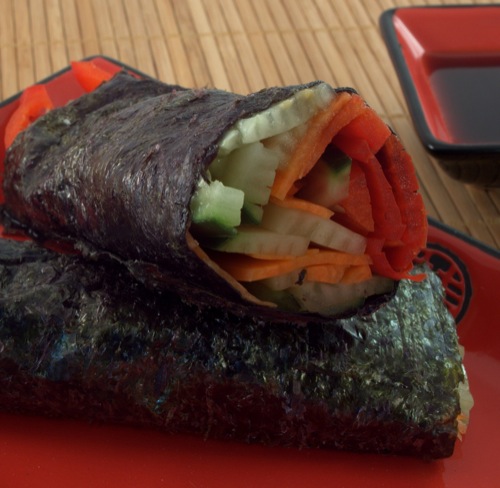 I really, really liked these rolls. They reminded me of veggie sushi, only better. I packed in more vegetables than the recipe called for and omitted the tiny bit of required avocado since I wanted to see how they tasted without it. Not only were they delicious without theextra fat, I think the avocado would have drowned out the sweet taste of the carrot and bell pepper which a perfect contrast to the salty nori! I also had enough leftover chopped vegetables to make a third roll, so I did. (FYI The recipe yields double what is pictured).

Around 2:15 I felt a wee bit peckish so I ate the rest of my grapefruit and then a banana. At 4:30 I felt hungry again but since it was too early to eat dinner, I settled on a large orange and a small (very small!) piece of dark chocolate.

For dinner, I decided to try my hand at making my own raw pasta. (Really I just wanted an excuse to play with my new spirooli). I used zucchini for my noodles and made a sauce using vine ripe tomatos, herbs and spices. A few bites in I decided to add a little vegan parm on top, which isn't raw, but I really liked the added flavor and cheesiness. (I'll share the pasta recipe with you next week!). 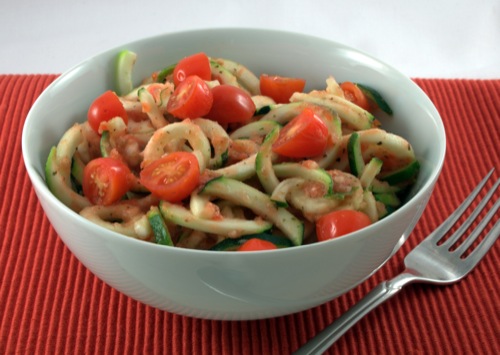 Lastly, I'd planned on a frozen banana for dessert, but having had a banana after lunch, I decided to save it for another day and make a strawberry shake instead. It was simple as sending frozen strawberries with a cup raw almond milk through my Vita-Mix. Yum!

At no point in my day did I crave or want cooked foods. However, when I was making rice for the pugs, I was momentarily tempted to have some myself (I do love brown rice). Instead I resisted, knowing I wanted it just because it was there and not because I was hungry or craving it. I'm really excited for day two!

I'd love to hear your thoughts on day 1!