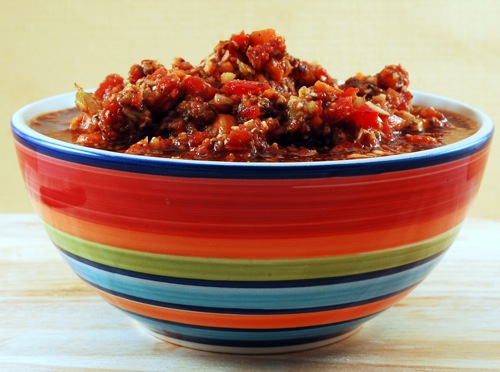 As soon as I posted a picture of this chili on twitter, requests started to pour in for the recipe. Not that I blame anyone, it's so good -- and innovative! I wish I could take credit for the idea, but I can't. This raw chili recipe is based off a recipe in Everyday Raw by Matthew Kenney.

The original recipe uses nuts, oil, sun-dried tomatos, water (a lot of water!), and some different spincing that what I've done here. I came across Kenney's recipe when I was doing raw week and as soon as I saw the recipe, I knew it was something I had to try. I admit I was skeptical about it at first. For starters, I'm not a fan of raw mushrooms and I couldn't possibly imagine eating "chili" cold or at room temperature, but wow. I was knocked down in shock at how rawesome this recipe is. 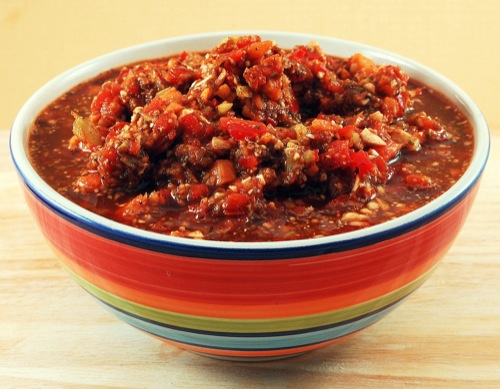 Anyway, Kenney's recipe is 100% raw and this one isn't since I use ketchup and soy sauce (I listed soy sauce because it's cheaper and easier to come by than nama shoyu but feel free to use nama shoyu!). That of course begs the quesetion: why am I calling it raw chili then if it's not 100% raw? Because it's mostly raw and I've noticed a lot of raw recipes do use marginal amounts of non-raw ingredients.

If you want it to be truly 100% raw use this raw ketchup recipe (substituting agave for honey for a truly vegan version) and nama shoyu. You can also use a few dashes of cayenne instead of the hot sauce since raw hot sauce can be hard to come by (or simply omit it). You might also want to add a dab of agave or other sweetener if you're using an unsweetened ketchup, raw or not.

Lastly, since I don't have a dehydrator, I tend to eat this chili with baked corn chips (which sort of craps all over the whole raw thing, I know) but it's great by the spoonful, too. If you have a dehydrator, you can make Kenney's Golden Tortilla Chips from Everyday Raw or my friend Diana's recipes for Guackers or Pulp Crackers (both raw).

I'm really excited about sharing this recipe -- I can't wait to hear your thoughts!

This recipe is based off an original recipe in Everyday Ray by the talented Matthew Kenney. Kenney's recipe uses nuts, oil and several other ingredients/spices that I've omitted, substituted out or altered in order to make a fat-free raw chili more akin to my taste preferences. For a truly 100% raw version, use a raw version of ketchup and nama shoyu for the soy sauce.

Chef's Note: As the chili sits, the mushrooms start to release their juices and the chili may get a little watery. Simply drain off the liquid if this occurs, but note that this chili is best served and eaten immediately.