This dish is frakkin' AWESOME. I try not to play favorites with my recipes, but this dish just safely landed in mine (and Scott's) top five. Add in the fact that its cheap and easy to make, and, well, that makes it creep up to #1 on some lists. For me, though, the best part is the birth of this dish. 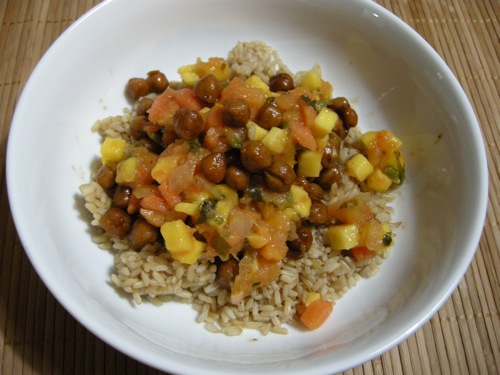 Here in LA all of the Chinese joints have huge "we sell Hawaiian BBQ" signs in their windows. I wasn't sure if it was a mere marketing ploy (lets slap some pineapple on that bbq rib and charge $5 more calling it 'Hawaiian BBQ') or a legit dish. Lucky for me, a friend of mine is from Maui so I asked her about it. She told me "Hawaiian BBQ" tends to refer to 'teriyaki sauce' instead of actual BBQ sauce and that's when the idea hit me: "Spicy Teriyaki with Pineapple!" Alright, enough jibber jabber outta me, here is the recipe. 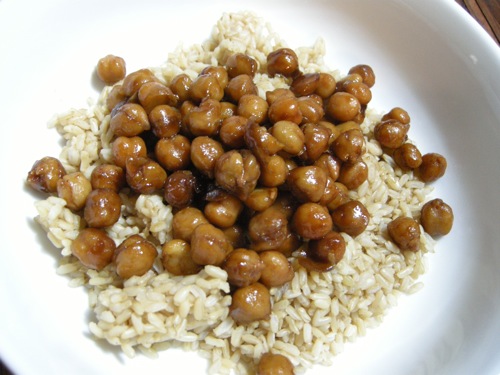 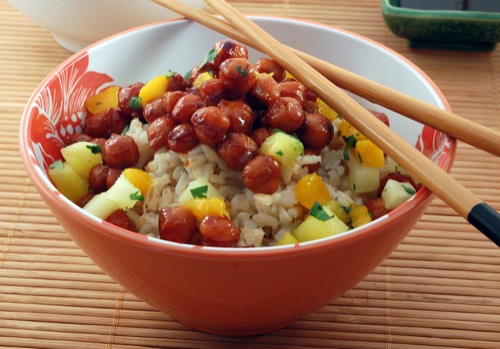 This is my vegan spin on Hawaiian barbecue. In Hawaii, meats are commonly marinated in teriyaki sauce before grilling and, lucky for us, the salty and spicy teriyaki also goes perfectly with the nutty flavor of chickpeas. Plus the fresh sweetness of the pineapple salsa adds another dimension you just can't beat.

Combine chickpeas, teriyaki, Szechuan sauce, and sugar in a large frying pan. Allow everything to sit and 'marinate' at least 5 minutes (the longer the better). Turn heat to medium and cook, stirring regulary or until most of the liquid has absorbed, about 10 minutes. Spoon chickpeas over rice and top with fresh pineapple or mango salsa.