the science of trigger foods… what causes hedonic eating? 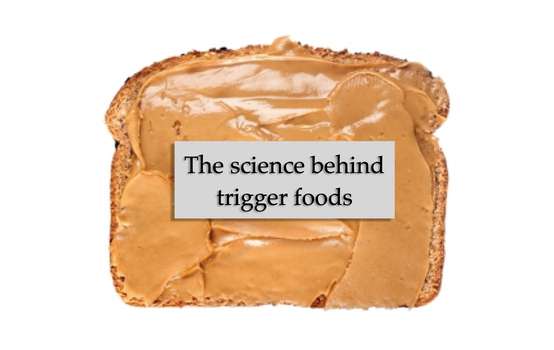 Welcome to Part 2 :) I hope you're enjoying the science bits I'm throwing down from my new book, The Science of Weight Loss which is now available.

Yesterday you learned that hunger can be a hormonally driven behavior, which means overeating is not necessarily a personal choice AND that the feeling of hunger can also be artificially stimulated by your thoughts and from environmental triggers (e.g., smelling food, seeing food). I also shared with you the five most surprising foods/ingredients that cause overeating and the power behind the appetite-related peptide GLP-1.

To piggyback on all that, I wanted to talk a little bit about trigger foods today. This was another area of research I found supremely fascinating when I was doing all of my weight loss science research.

In general, trigger foods are usually calorie-dense; that is, they contain a lot of calories in a very small package. Highly palatable foods that are combinations of sugar and fat (e.g., ice cream, cookies, cakes) or fat and salt (e.g., nuts, potato chips, French fries) are the main “types” of trigger foods. This happens because of how they light up the pleasure center in the brain. 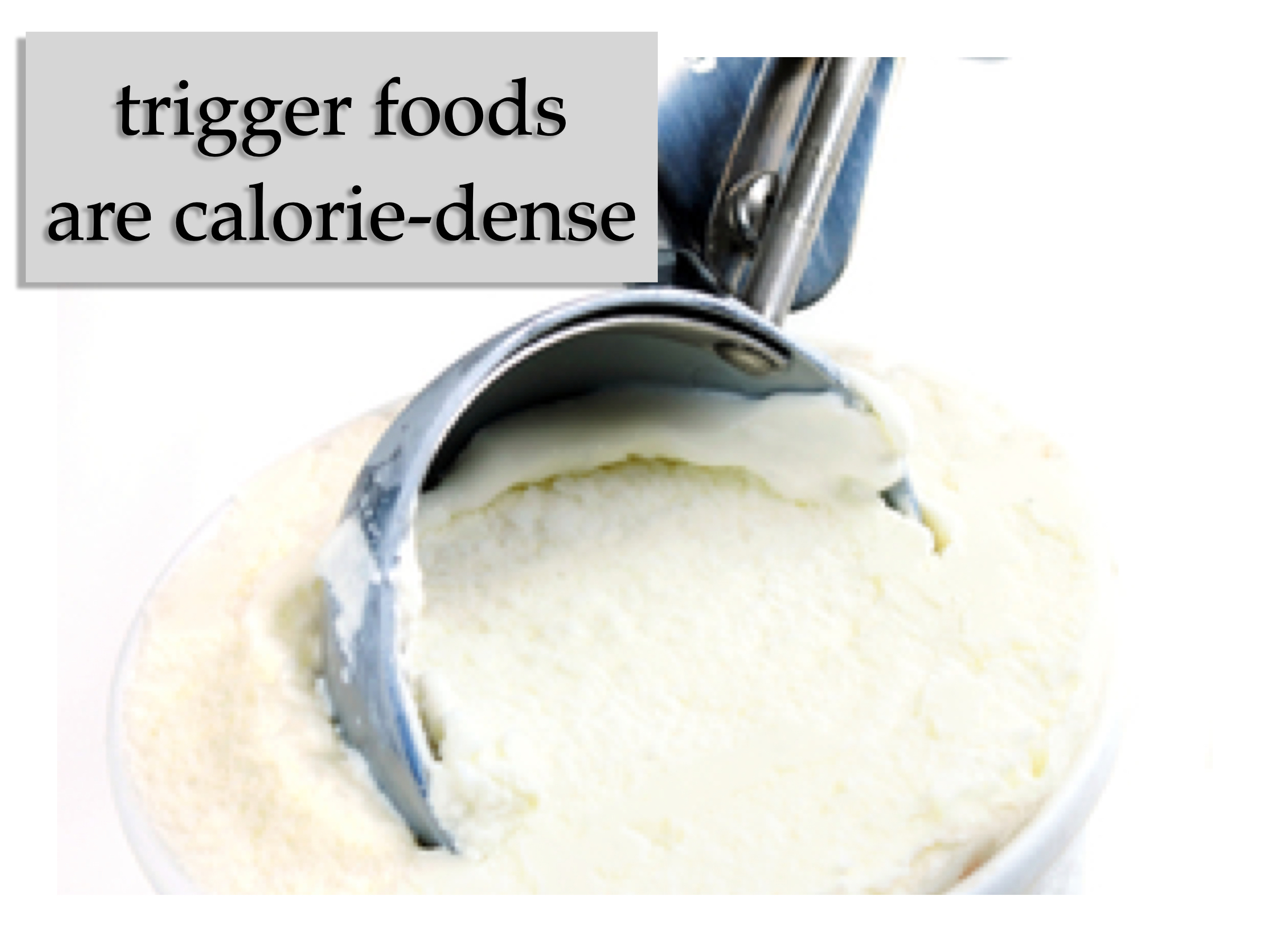 Interestingly, adults tend to have a preference between sweet or salty, they don’t usually favor both equally. 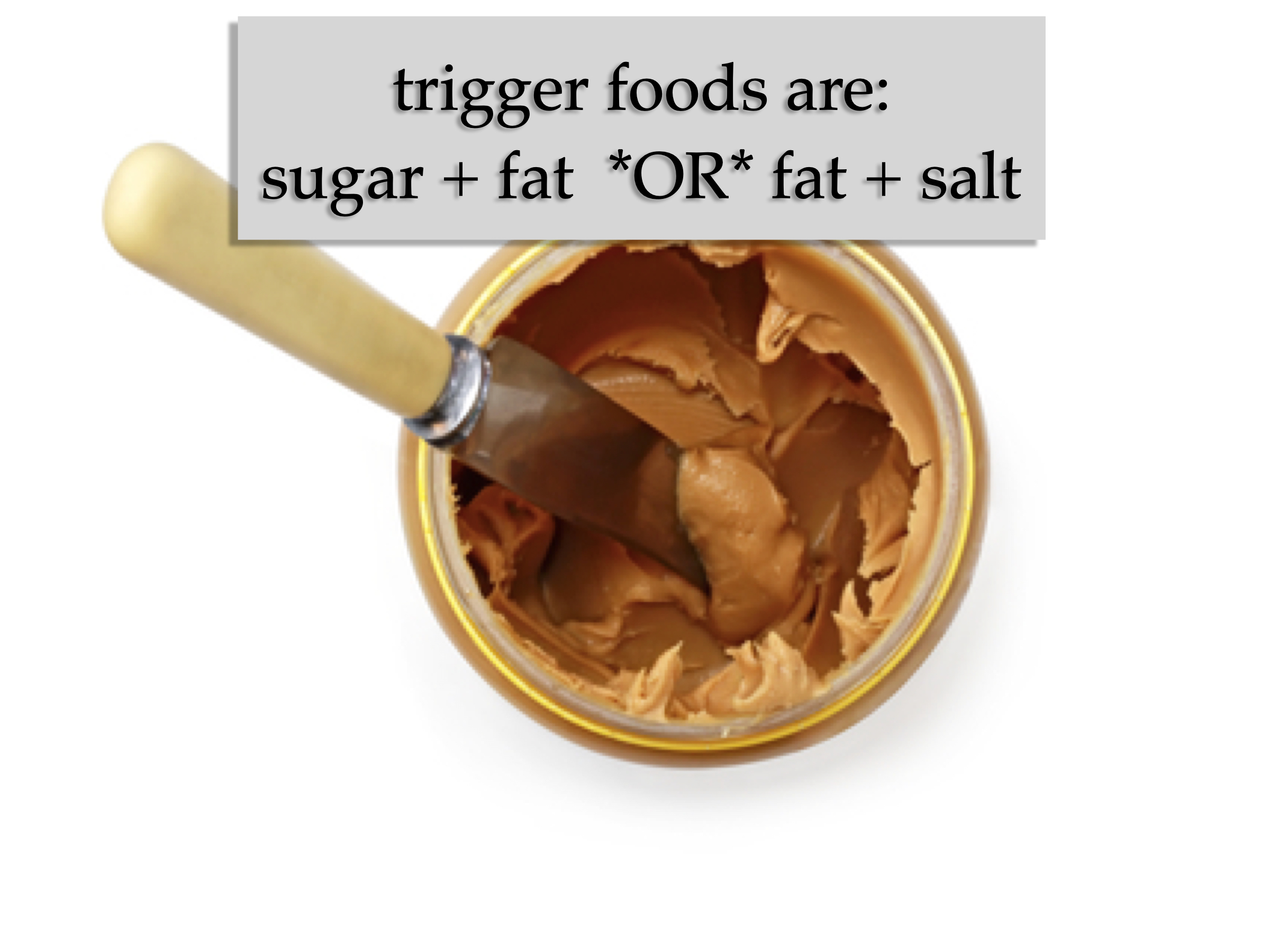 But there is an even bigger demon: supernormal stimuli.

Supernormal stimuli are jacked-up versions of natural rewards that stimulate the brain’s reward center more than a natural reward version ever could. 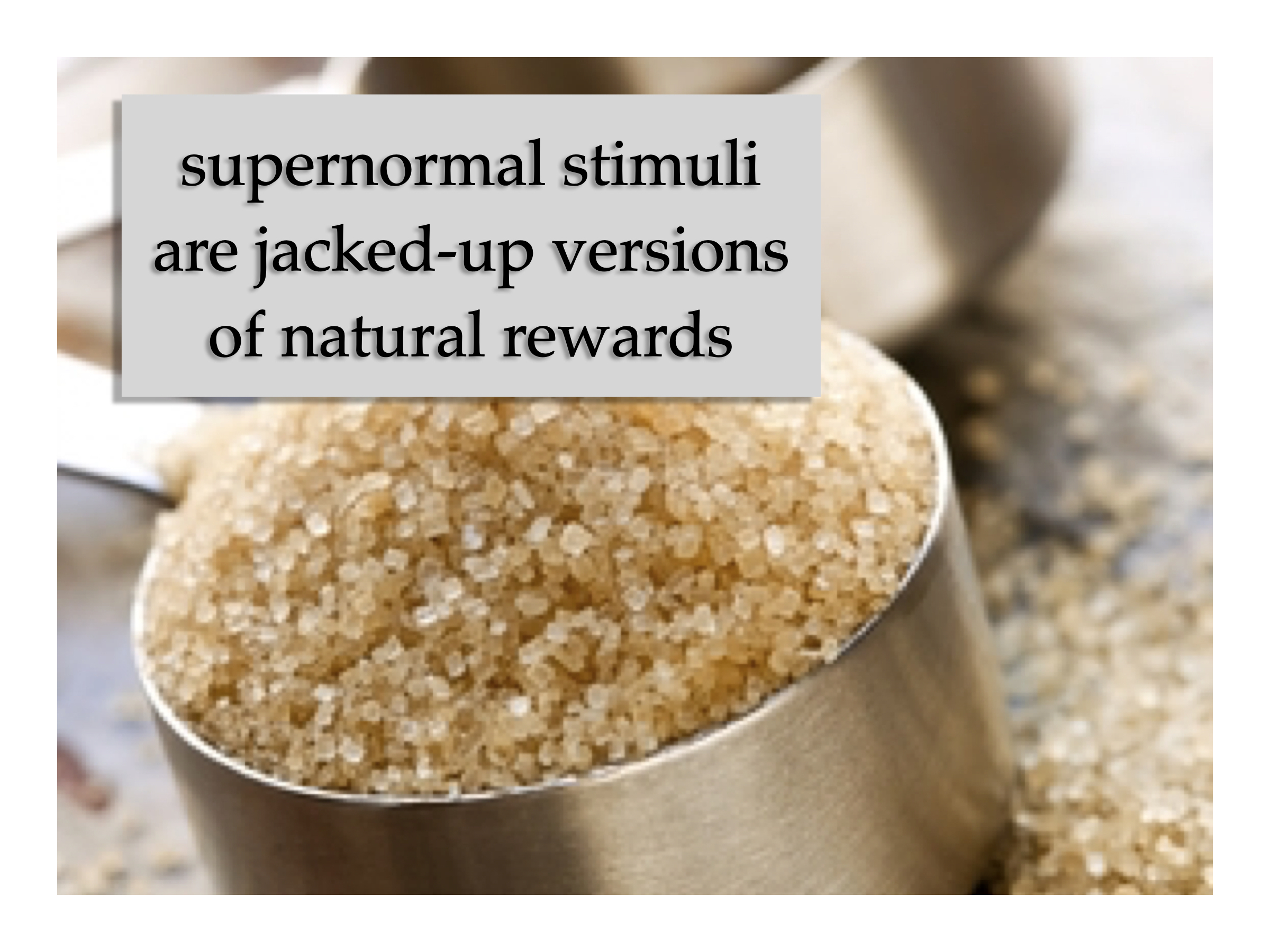 Sugar, for example, is a supernormal stimuli—it exaggerates the features of normal stimuli (food) that humans are designed to find rewarding. By comparison, the sweetest thing in nature is very ripe fruit. 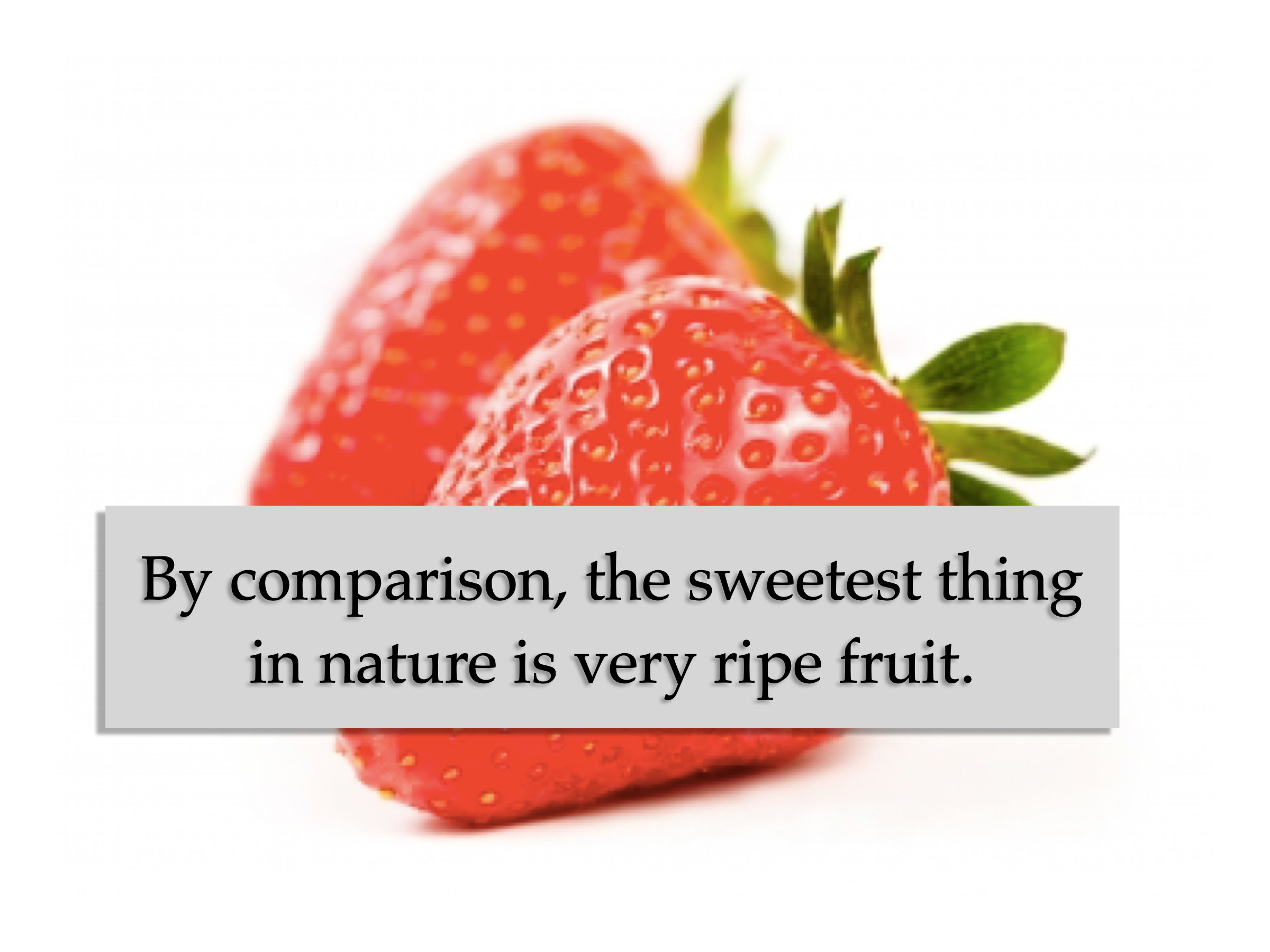 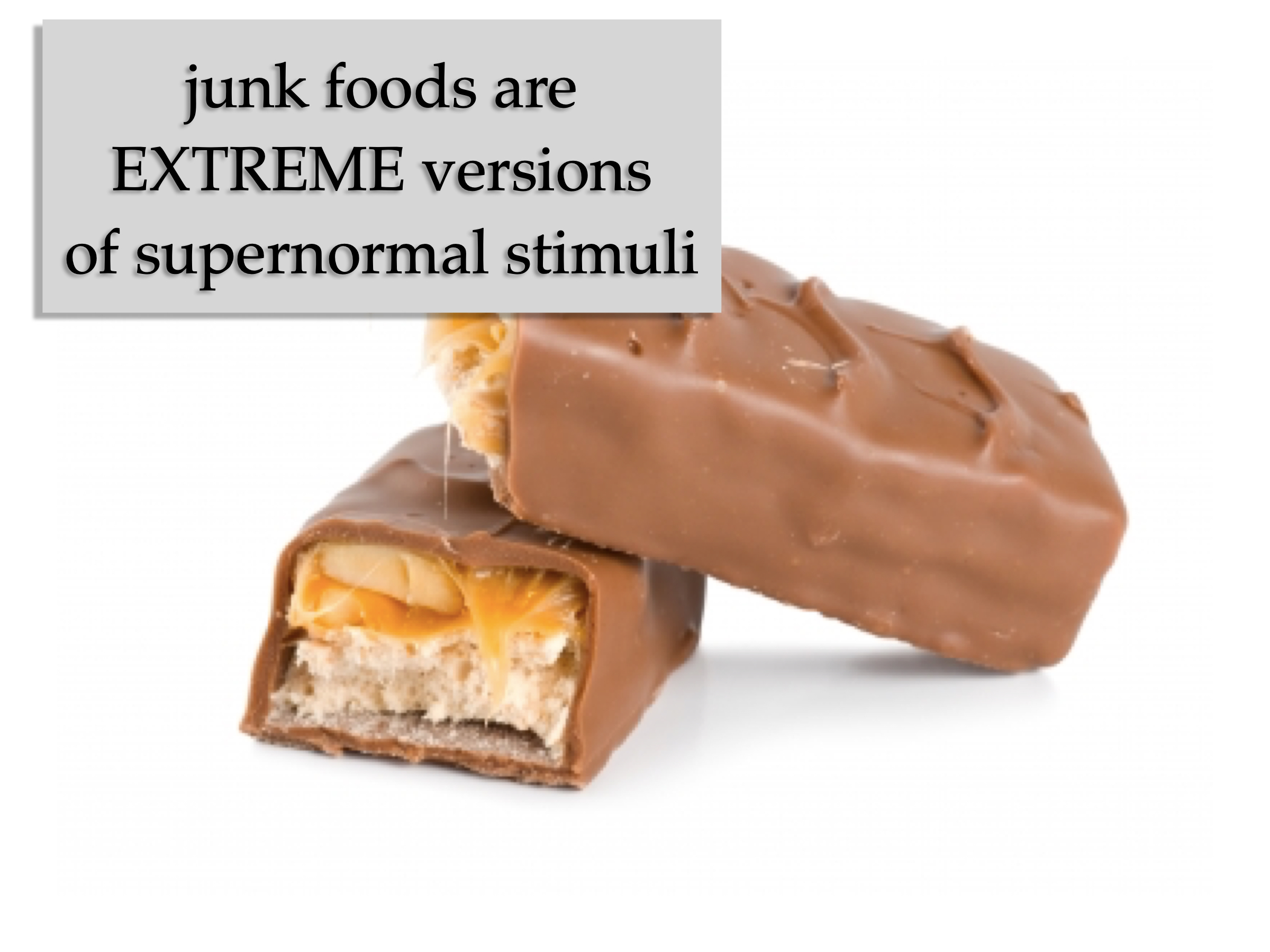 Food manufacturers have also hired engineers to manipulate several of the super-normal stimuli ingredients to elicitthe ultimate pleasure response. In the processed food industry this is referred to as the “bliss point”.

For example, food manufacturers have altered the distribution of fat gobbles to affect absorption rate (this is known as the “mouth feel”), changed the physical shape of salt so it hits taste buds harder and faster (this is known as the “flavor burst”), and they have added condensed chemicals that are known to trigger a hedonic or pleasure response. 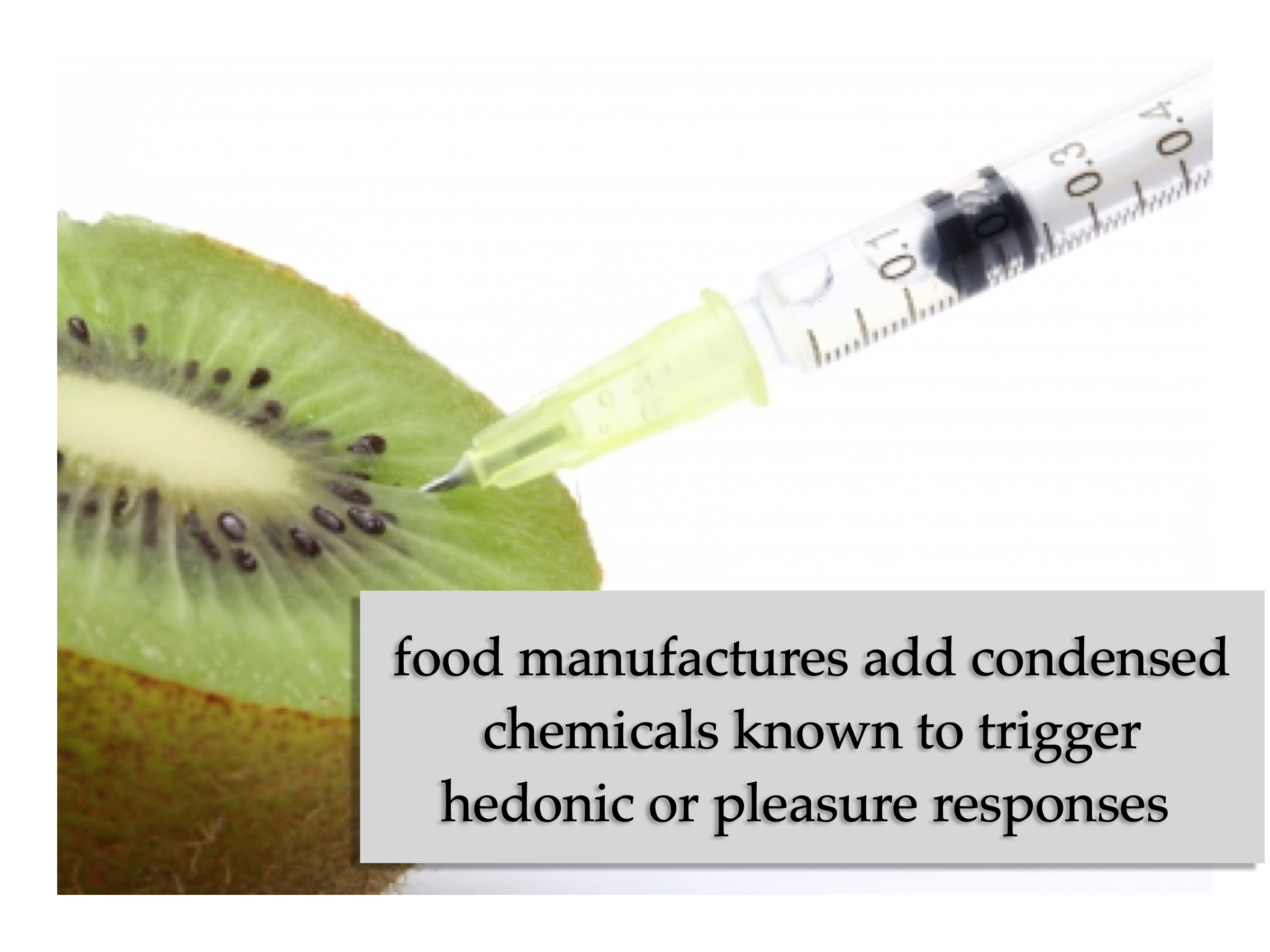 The extreme “addictive” nature of these foods cannot be quantified and any human brain is likely to respond to these food products in deranged and addictive ways. 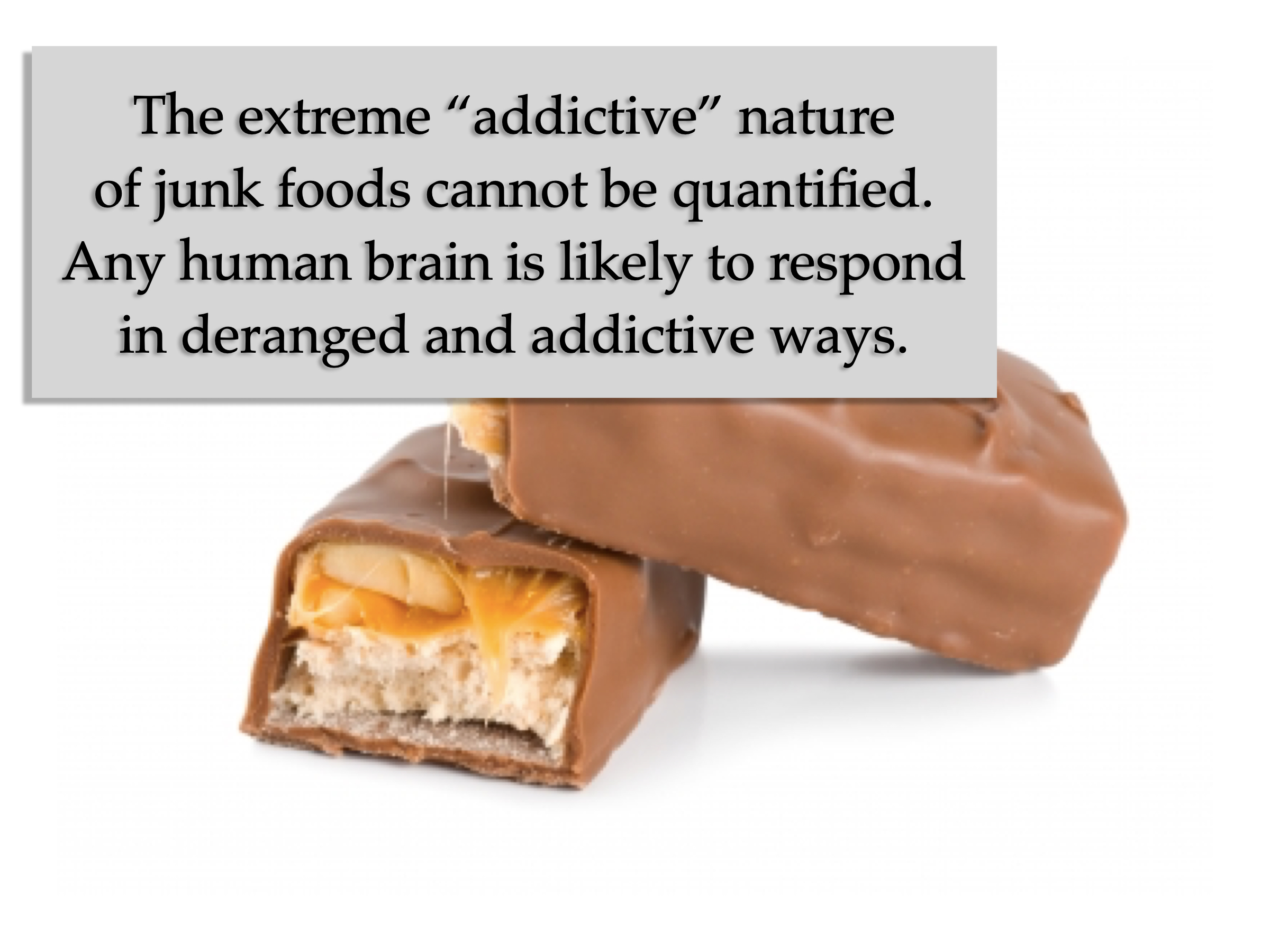 What I really found fascinating, though, is that physical addiction—the “chemical hook”—plays a very minor role in all addiction. Even with the most addictive drugs of abuse, chemical dependency only accounts for approximately 17% of the addiction. 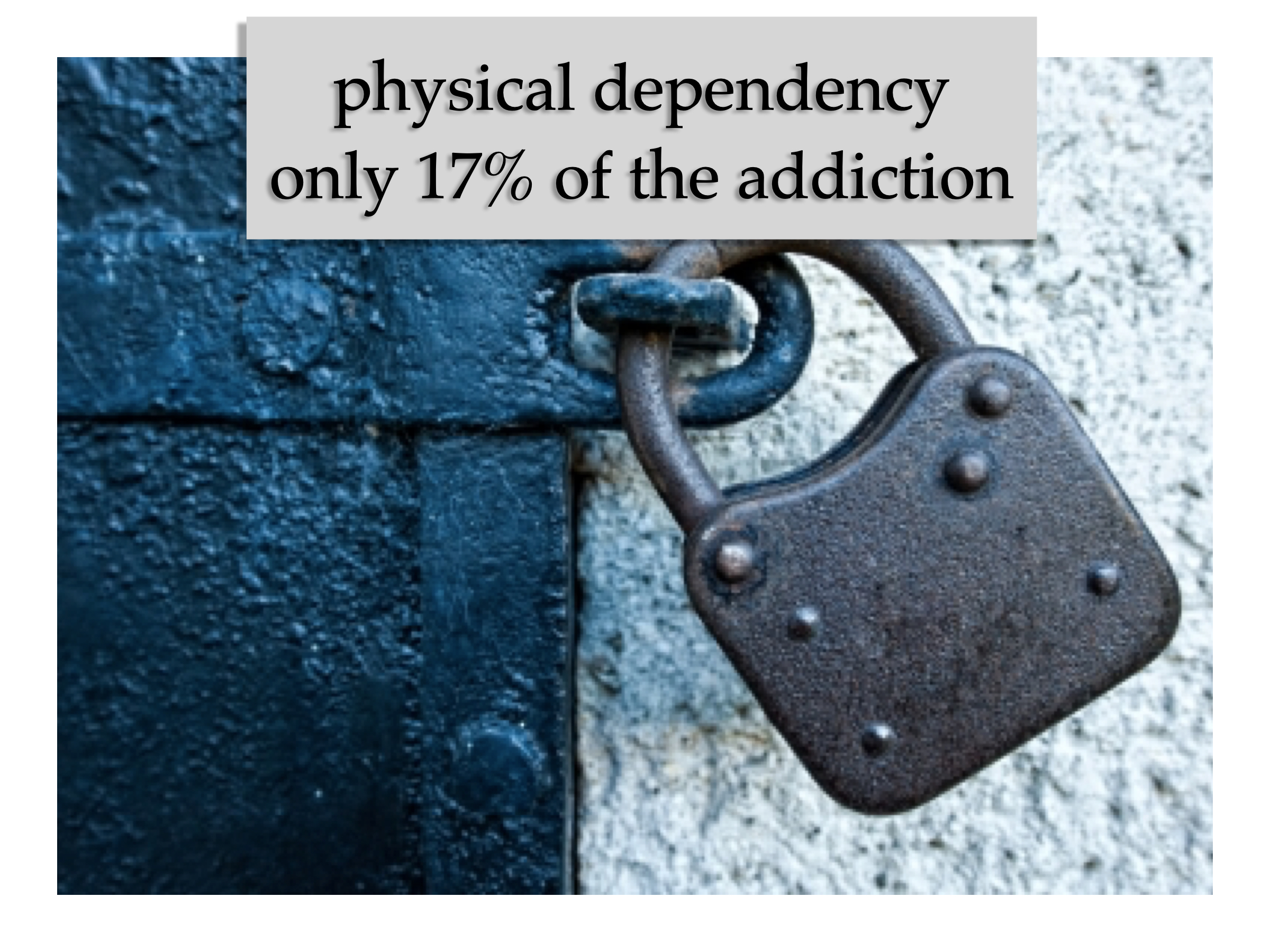 In fact, you can be “addicted” to something and have no physical addiction to it!

This also helped me understand why behavior modification (e.g., not buying ice cream; abstaining from certain foods) only works up to a certain extent with weight-loss and weight management.

It also explained why if a client was “binging” on popcorn, but then decided she would no-longer eat popcorn, she later binged on frozen peas, only to say she was going to abstain from peas, and then she’d start binging on oats (uncooked oats!). On and on this went. In fact, I saw this particular behavior with SEVERAL of my private clients. And sure, binging on peas was light years ‘better’ than binging on Oreos and doughnuts, but eventually, we got to a point where, if they were going to binge, even if it was on vegetables, they weren’t going to lose any more weight… we had to address the CAUSES of the binge and stop the binging in its tracks to move progress forward.

For me, seeing that “behavior is but a symptom” also helped me deeply understand why people ‘relapse’ with drugs and ‘yoyo’ with their weight. 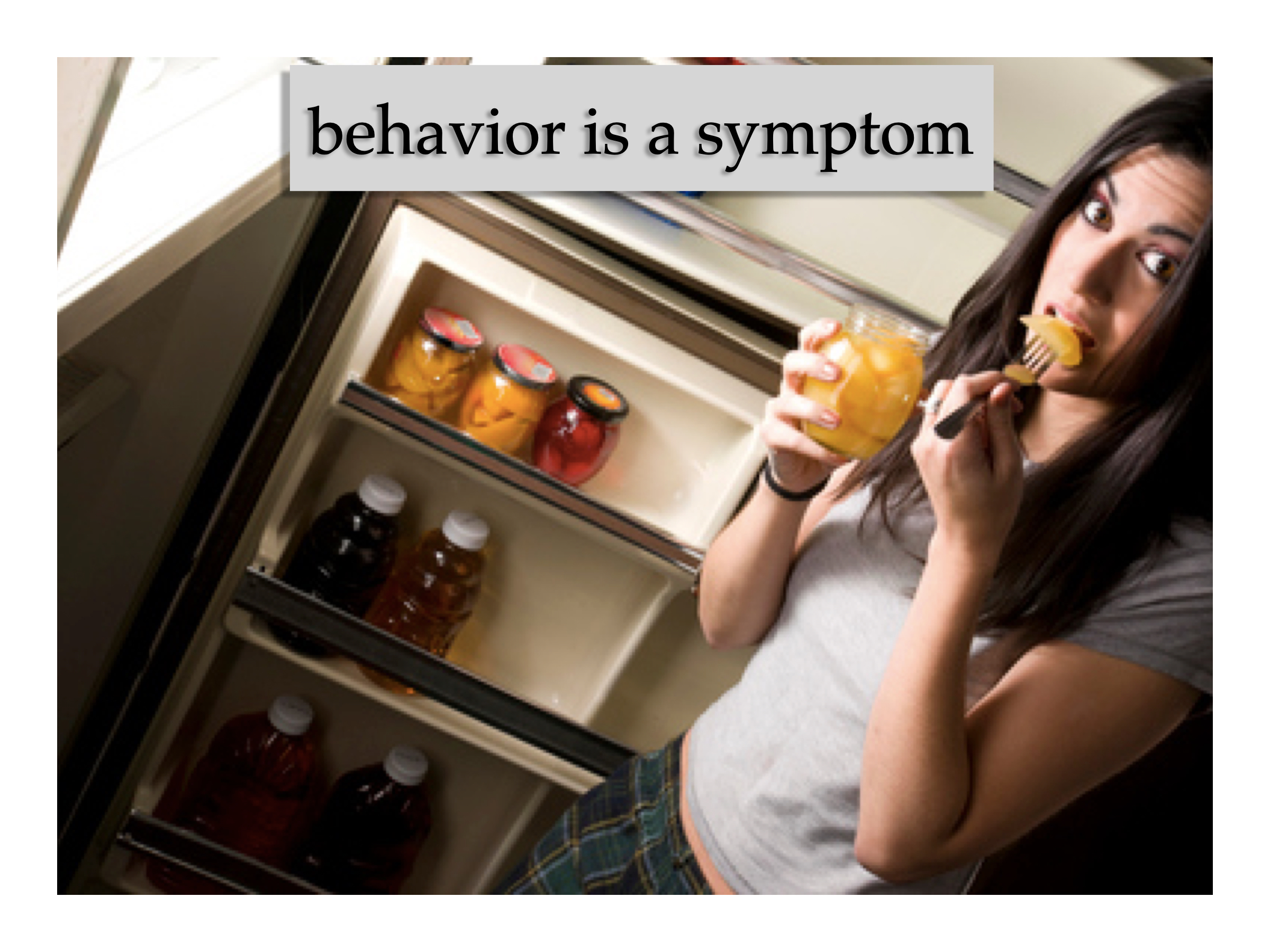 If you have trigger foods, it can absolutely be helpful to take a “sobriety” for 30 days to disconnect from your compulsion and really take a look at your relationship to that food and your behavior with it… but then you also have to dig into WHY you were turning to food and “using” food in that way. That part isn’t nearly as easy or straight forward, but it is critical.

When I first started writing my research book on weight-loss science, I focused on the more direct science such hormones, the glucose-burning pathway, the fed vs fasted state, gut bugs, enzymes, anatomical variations, the effects of exercise, macronutrient priority, and so forth. I was able to identify more than 100 science-based pathways to accelerate weight-loss with that foundation and research… but yet my work felt incomplete.

I realized I had been so focused on the physical body I had failed to look at the head. By looking past the behavior and taking a psychological and neurological look at the drivers BEHIND overconsumption (and what motivates us to consume food in general), I finally saw EVERYTHING. I finally had that holistic view and foundational understanding to grasp (and conquer) the struggle I had with food. I dare say the “brain” chapter might be my favorite chapter in the entire book… 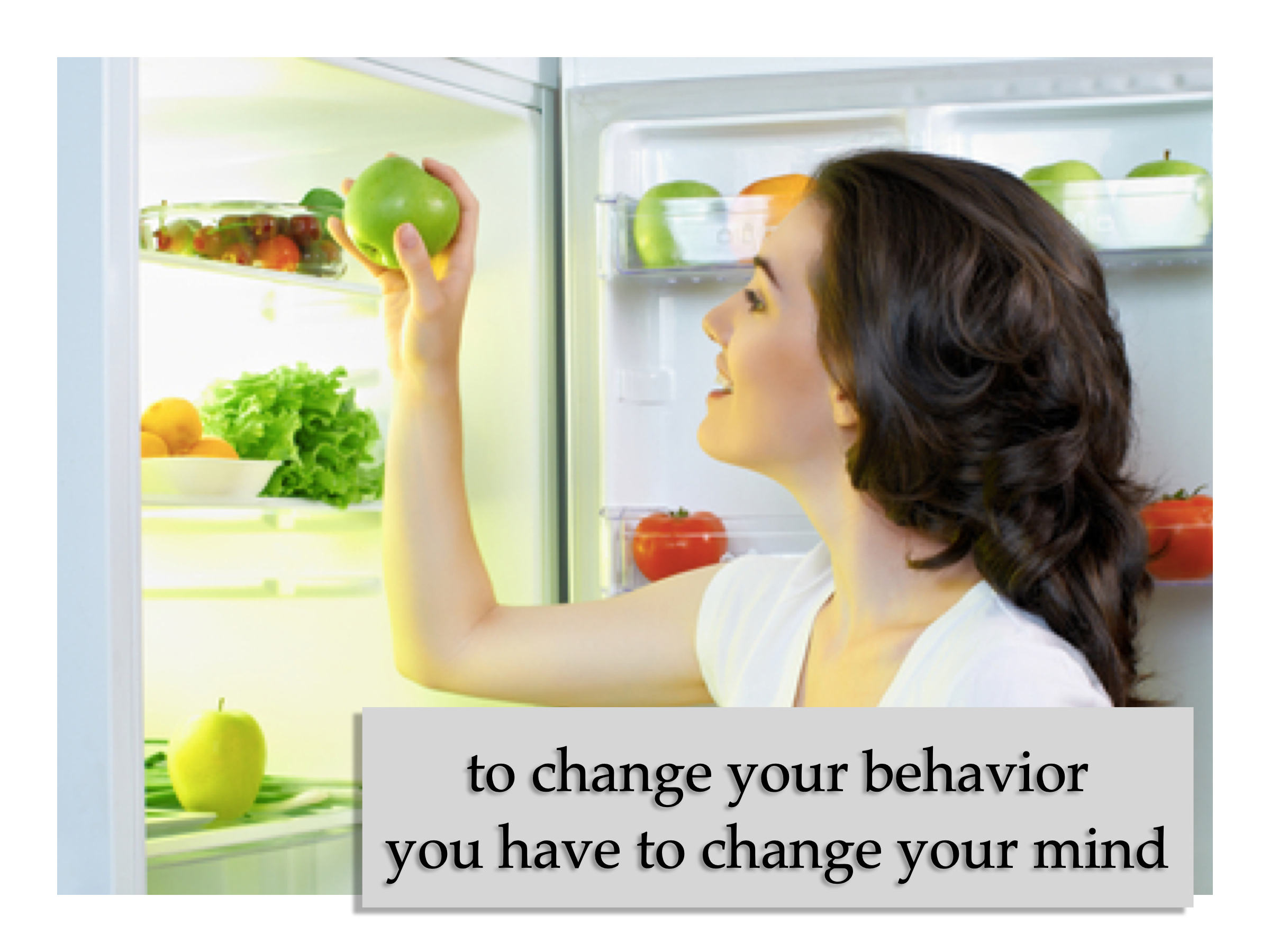 If you’re ready to “dig in” on all fronts, the next step is to get your copy of The Science of Weight Loss

Get your copy of The Science of Weight Loss here

(You'll get a kindle, mobi, and PDF format that's printable).

I took everything I learned after 4 years of research (reading 346 studies and 53 books) and wrapped it all up into one easy-to-understand book. This book summarizes all the science, debunks mainstream myths, and provides you with more than 100+ different actionable strategies you can employ immediately to get results going.

For those of you who don’t have the time or desire to do all that reading and sleuthing yourself, this book is 100% for you!

Get your copy of The Science of Weight Loss here 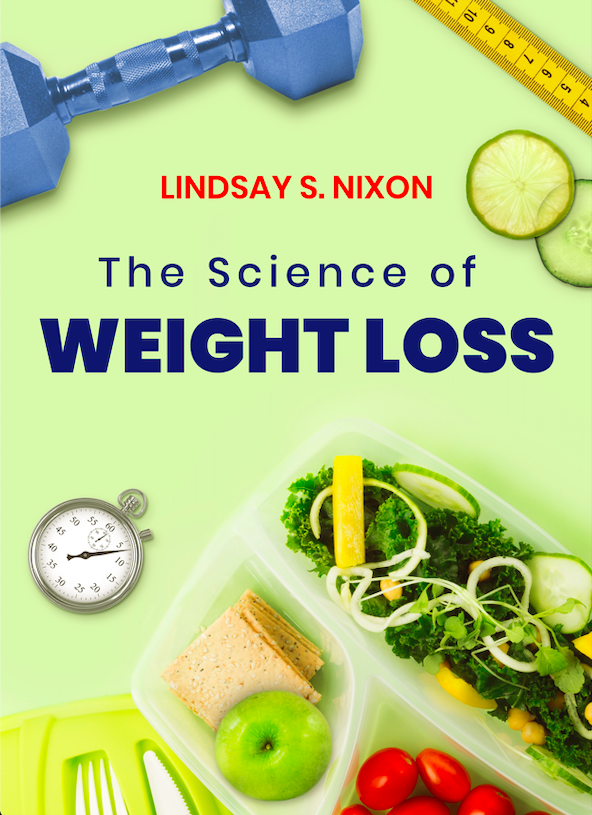