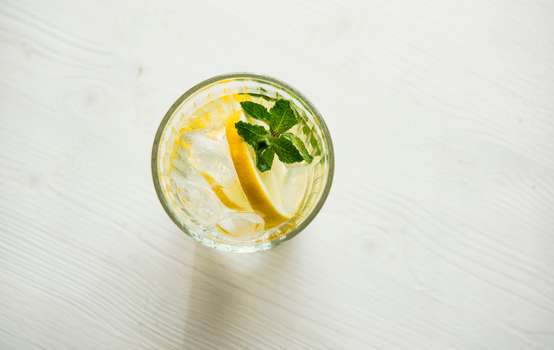 Are you sometimes mystified by your bowels? Do you go through weeks’ of perfectly poops and then suddenly things clog? Do you ever have random diarrhea or constipation that comes out of nowhere but (thankfully) clears up after a day or two?

I’ve scienced the crap out of this (literally!) -- here’s what you need to know.

Immediately after I released my original Bikini Blueprint + shared what I learned about digestion and the surprising number of plant foods that can cause pooping problems and bloating (and not the usual suspects like beans … I’m talking big surprise offenders like mushrooms and apples), a lot of people wrote me that they’d finally found GI relief. 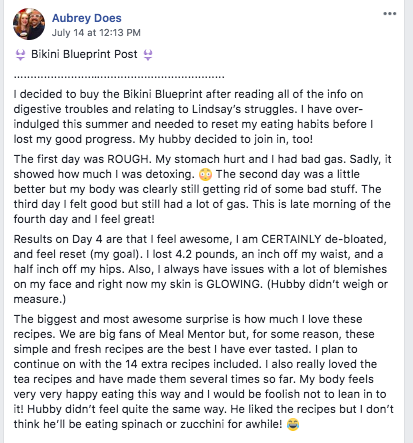 I was so happy to hear I’d been able to help them and that my own embarrassing TMI story had a purpose. ;)

BUT THEN SHIITAKE HIT THE FAN, again.

Two women who had been a “success story” wrote me that the plan had stopped working.

One woman said, “I did this plan for three weeks straight and have never felt or looked better. This week I’m bloated, constipated, gassy, very uncomfortable, I can’t explain it. I swear to you I didn’t cheat or do anything differently – help!”

My initial thought in response was that her repetition of the protocol could be the problem.

The plan is only intended for 2 to 5 days.

I knew of research that said mono diets or very limited diets can contribute to digestive problems since they decrease diversity in your gut biome, but three weeks didn’t seem long enough to do that for her.

Still, I had no other explanation, so I suggested she take a break. Although eating differently didn’t make her feel any better, when she went back to the protocol two weeks later, it proved effective.

Things were looking up...

Until the following day when I received another email from someone else ...

“I’ve used this protocol 4x this year with excellent results. This time it’s not working. What am I doing wrong?”

We exchanged a few emails and I learned that historically, she always started the protocol before an event such as a wedding or reunion. She wanted to look her best and wasn’t having any digestive issues at the start. This time, however, she was doing the protocol to “reset” after vacation. (She got the idea from me, as I often use the Bikini Blueprint after I travel.)

Her system was totally out of whack, and I wondered if her being constipated BEFORE starting the protocol was part of why it wasn’t being as effective for her this time. That seemed plausible, but then I remembered the dozens of emails and comments I read from people who said the Bikini Blueprint CURED their constipation.

I was frustrated… I wanted to help her, I yearned to dig into science for a solution, but the problem was I didn’t know where to look….

UNTIL one of my private clients handed over her old food journals a few weeks later.

For years my client had suffered from undiagnosed digestive issues. She oscillated between diarrhea and constipation (with 1-2 weeks of normalcy between those symptoms) and had been unable to find a diet that consistently worked for her body.

Tracking her food and symptoms helped her find some clear offenders, but even when she kept to her “safe” foods list, there would still be weeks where she had “pooping problems.”

Although she wasn’t consulting with me for her digestive issues, she offered her old food journals to me so I could better familiarize myself with her patterns.

I noticed her diarrhea and constipation looked cyclical.

Creating a timeline of her symptoms confirmed this, and pretty soon I was able to predict her symptoms relatively accurately. For example, I would skip a few months ahead in the journals and see that the weeks I thought she’d be constipated she usually was.

“These digestive issues act in cycles,” I thought, and then it hit me.

I called my client and asked her to tell me the dates of her period.

Her menstruation cycle wasn’t a perfect match or a mirror to her digestive cycle, but it was close enough to pique my curiosity.

What I learned about female hormones and the reproductive cycle surprised (and shocked) me – mostly because of how obvious and overlooked it is when a woman has GI problems.

More importantly, when I took what I discovered to the two gals who had emailed me, we were able to verify that this was their problem, too. THIS explained why the protocol suddenly didn’t work as well as it had before and then worked beautifully again later.

Even better, my client with chronic digestion problems? Together we were able to apply this science and create preventative measures that ELIMINATED the majority of her symptoms and suffering! WOOHOO!

THE SCIENCE: PROGESTERONE AND PROSTAGLANDINS

Progesterone causes constipation and prostaglandins may cause diarrhea (if they go rogue) even when you eat “perfectly” or the same “safe” foods you always eat.

Here’s how it happens:

Once a stool is formed, it makes its way through your bowels via muscle contractions (this is called peristalsis).

After ovulation, progesterone rises to help prepare the body for pregnancy. If the egg is not fertilized, progesterone falls and the period begins a few days later.

What does this have to do with constipation? Progesterone is a natural muscle relaxant. In fact, it is given to pregnant women to counteract uterine contractions.

It is logical, then, that progesterone would also counteract contractions in other muscles, like those in your intestines needed for peristalsis.

Indeed, this is why constipation is common during pregnancy: Progesterone is rising.

Think of it like this: Progesterone acts like a cocktail for your intestines. They become (temporarily) a little more relaxed. Then when progesterone starts to fall shortly before your period, intestinal muscles start to lose their buzz. This is why you can sometimes (quite literally) feel your constipation beginning to lift.

As for diarrhea: You can thank (blame?) prostaglandins, which cause the uterus to contract in order to expel the uterine lining. (These hormone-like lipids are responsible for period cramps.)

If any prostaglandins go rogue (which they’re known to do) they can cause your bowel (which is oh-so-neighborly) to contract, causing diarrhea. Sometimes rogue prostaglandins make it all the way up to the brain, causing migraine headaches.

SOLUTIONS: It’s not sexy, but start tracking your pooping cycles with your menstrual cycles.

Understanding your diarrhea-constipation-PMS cycle is also necessary for “prevention” of these symptoms which, in my experience, is the only truly effective “remedy.”

There are treatments you can do (which I’ll share below), but not having the symptoms to contend with at all is more manageable, in my opinion.

Progesterone starts to ramp up approximately two weeks after the start of your last period (Day 14-ish.)

This means in the days prior to ovulation you should start eating easily digestible foods and avoid anything that is constipating for you. (Strategy #1)

Wheat-based products such as bread and pasta (as well as “gluten-free” versions) increase the likelihood of constipation in most people, along with animal products like meat, eggs, and cheese, if you eat those. Bananas, corn, grains (including brown rice), and soy can also be constipating. Foods that are dried or dehydrated, including dates, raisins, kale chips, apple chips, overly baked or dehydrated “raw” whatevers, and air-fried or air-puffed foods (like rice cakes and popcorn) can be constipating due to their lack of water. (FYI, Dried fruits and puffed foods are a major clog for my system.)

This is a good time to do the Bikini Blueprint protocol since it is free of all common allergens and free of all foods known to cause constipation or bloating.

Strategy #2 Include foods that tend to help you “go,” such as berries, rhubarb, kiwis, oat bran, sweet potatoes, and red lentils.

Strategy #3 Cook your food more than you usually do and avoid raw vegetables. The more cooked a food is, the easier it is to digest and “move out.” Likewise, choosing more puréed foods such as butternut soup with one caveat: Avoid anything that can cause you to swallow air (such as smoothies or foamed milks).

Strategy #4 Eat smaller portions more frequently. (FYI, during “this time” of the month I eat a little bit of food every two hours instead of my regular meals, as I find I can easily “clog the system” with my buzzed intestines.)

Strategy #5 STAY HYDRATED. I can’t encourage this enough. More water and a lot less alcohol and coffee; they are both diarrhetic and irritating to the GI system.

REMEDIES: If you’re constipated, take a magnesium supplement before bed. (You may need to give yourself a little more time in the morning.) If you’re tracking your cycles, you also can take magnesium before ovulation to preventatively help yourself by clearing the deck.

My doctor doesn’t recommend taking magnesium too often because it can “cause a lazy colon” and you can become “dependent” on it, but taking it once or twice a month to deal with period constipation isn’t worrisome in my opinion. There are also teas you can drink. (I love this tea and find it works beautifully for me.)

If you have diarrhea, eat foods that are “binders,” such as bananas, white potatoes, white rice or oatmeal. Realistically, any low-fiber, low-fat food is likely to help alleviate diarrhea.

A couple of my clients have said an increase in omega-3 fatty acids also has helped prevent or provide relief to cycle-based diarrhea. If these vegan sources like hemp seeds and walnuts don’t normally bother your stomach or cause digestive issues, it could be good to eat them shortly before and during the “diarrhea time” of your cycle.

BOTTOM LINE:  There are several factors that can cause your bowel frequency or consistency to change, but one key factor that most women overlook is the menstrual cycle. Knowing your cycle can help you slightly alter your diet to prevent constipation and bloating. Work WITH your body and cycle. :)