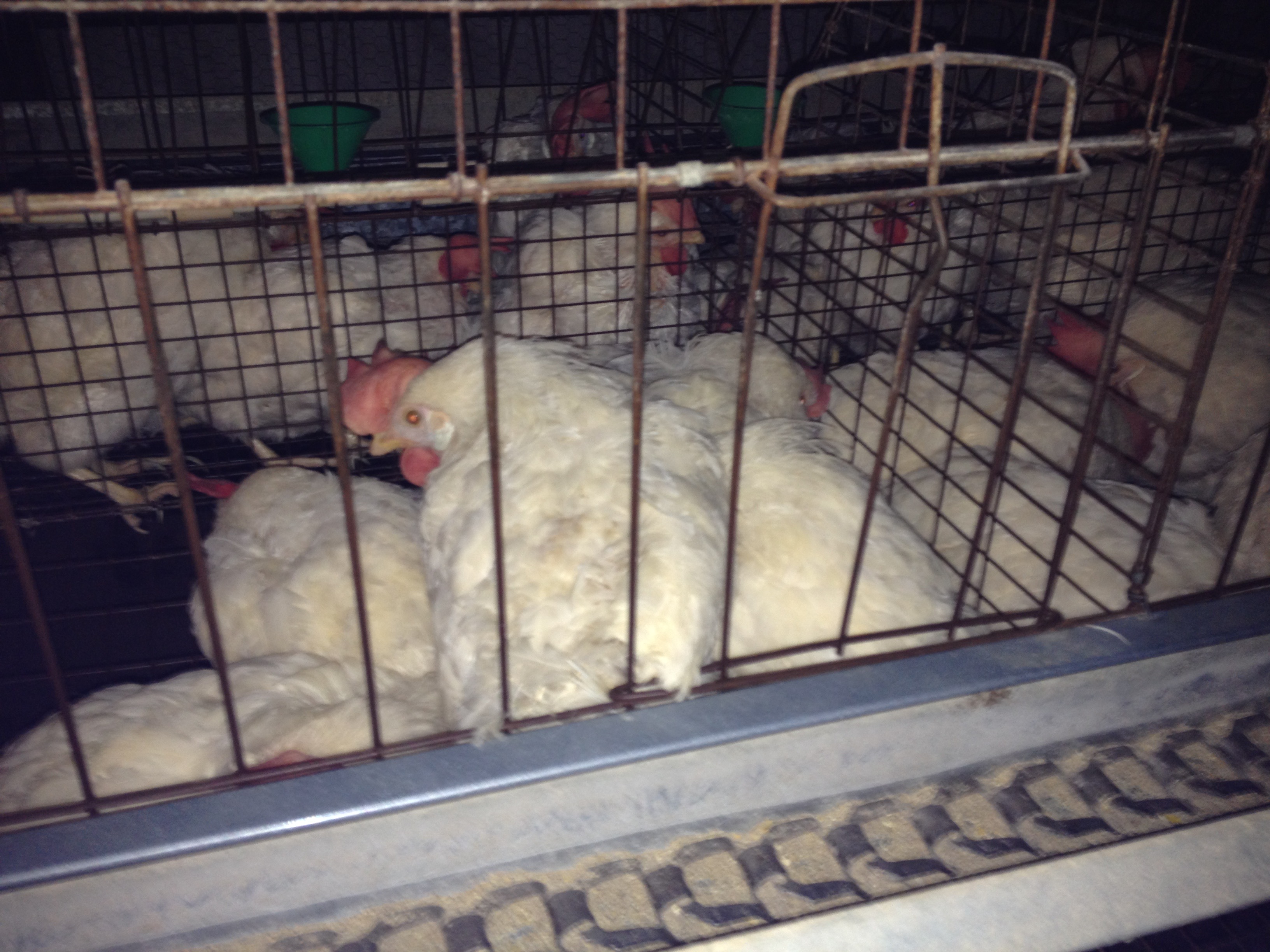 I was scared to post it, still am, but I also want to facilitate change...

After last week's news: LA banned the use of animals for entertainment, I decided to do it. If my city can stand up, I can stand up too.

*names have been changed

In the five years I have been vegan, I've never met an animal rights activist...

Let me clarify: I know plenty of people who protest and participate in outreach efforts (which is great!), but I have never met someone who actually rescues animals from farms or slaughterhouses.

Paul is a member of APRL, a non-profit organization that works to document and expose animal cruelty, educate the public about animal issues and works with policy makers and politicians to implement humane change.

I didn't know this when I met him, though.

We were volunteers at the same Veg Fest, and he asked if I'd like to go to dinner with him, his girlfriend, and another friend of theirs afterward.

On the way to dinner, Paul's girlfriend (Diane) started telling me about a chicken she just rescued—it was her first chicken.

Initially I thought Diane meant she fostered or adopted a chicken the way you can "adopt" turkeys at Thanksgiving. You don't actuallyadopt the turkey the way you adopt a chihuahua—it'ssymbolic: you pay the donation fee which is used to feed and care for the turkey and in return you get a nice picture of "your" turkey.

Diane went to an egg factory farm and saved one of the hens. "She's getting medical attention right now." Diane said happily. "When she's better she's going to [a farm sanctuary]."

I was amazed at Diane's bravery and compassion.

Paul looked and me and said, “Have you never been to a factory farm?”

I wanted to go and I didn't want to go.

But I agreed to go.

Paul and Diane took me to a thrift store first, explaining I needed to wear clothes and shoes I could throw away. (Details on why later).

I picked out the first items I saw in my size: a red sweatshirt and khaki pants. Paul laughed a little and said, “Yeeeaaah you need to wear, ugh, dark colors.”

Right. This is ninja-style. Clearly I was an amateur.

10:09pmArrived at the “public” part of the farm. Small country-style house turned into a storefront. Handmade sign “farm fresh eggs.” Cute and homey, I can't believe this is a “bad” place.

10:11pm Paul says, “This is the best of the worst. This is one of the “better” farms because the cages are not on top of each other so the hens aren't covered in each others excrement."

10:12pm "Most other egg farms are double-stacked. It's madness" Diane adds.

Every “barn” is as long as 2, maybe 3, train cars. There are over a dozen of these "barns". There must be thousands and thousands of hens inside each.

10:21pm Diane says we're going into the second "train car" because it's open. As if reading my mind she adds, "The locked ones are much, much worse."

I feel the adrenaline and fear building inside me. I am shaking. My palms are sweating. We better go do this before I lose my nerve.

"You'll get used to it, breathe through your mouth" Diane says.

I DO NOT WANT THIS IN MY MOUTH I think.

10:26pmTumbling through mud and weeds as high as my thigh.

The smell isgetting worse, if you can believe it.

We're almost to the "barn".

I CAN HEAR THE HENS.

They're making a coo-ing sound which would usually be sweet but there's a bitter undertone to it. They're scared. They're trying to cope and comfort each other.

Each hair on my body is raised...

10:29pm“We have to be careful not to spook them,” Diane warns, “If one goes, they all go. It sounds like they are crying. It's so loud it'll act as an alarm and we'll have to run.”

I am too shocked to cry, but I want to.

I want to hold each hen and tell her I love her, and she's safe now because I'm going to take her home... but I know I can't.

All I can do is help Diane and Paul take pictures and videos for APRL. 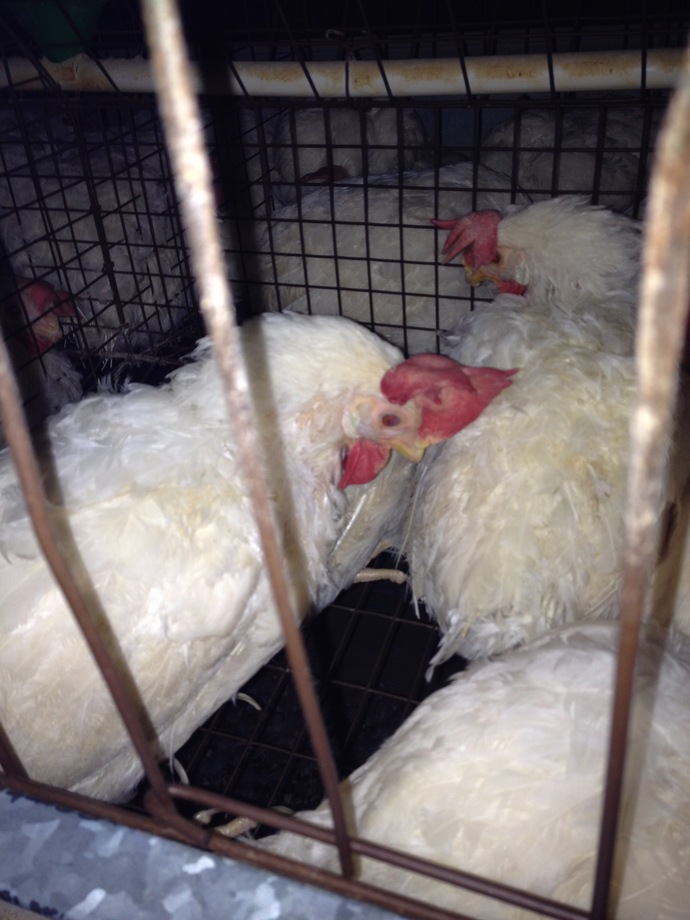 10:31pm Diane shoes me the hens bellies and feet—how they were mangled through the bottom of wire cages.

"They sit so long in these positions that when we rescue them, they have metal grate patterns in their feathers." Diane tells me. 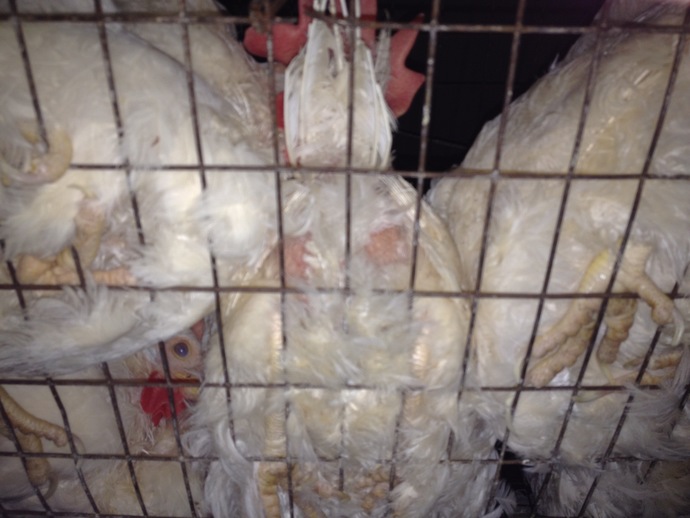 This is everything I have heard and seen on YouTube, but now right in front of me.

I can't look away.

I can't shield my eyes.

I can't pretend that "it's only an isolated instance" of cruelty.

Here are a few more of the pictures I took that night.

Remember this is the "best" of the worst in terms of conditions: 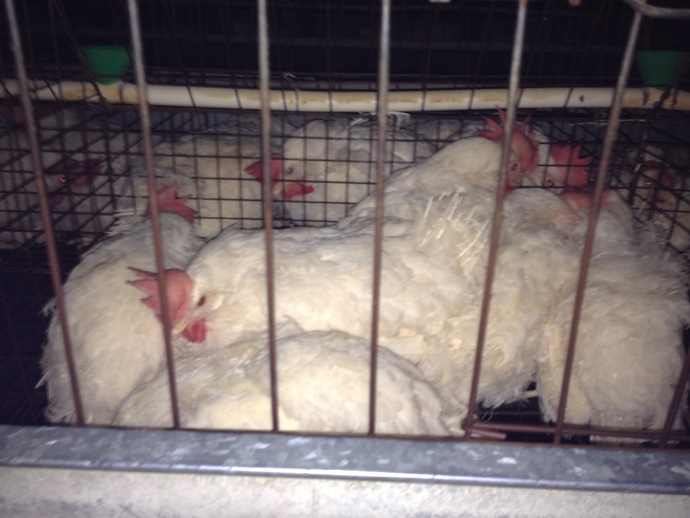 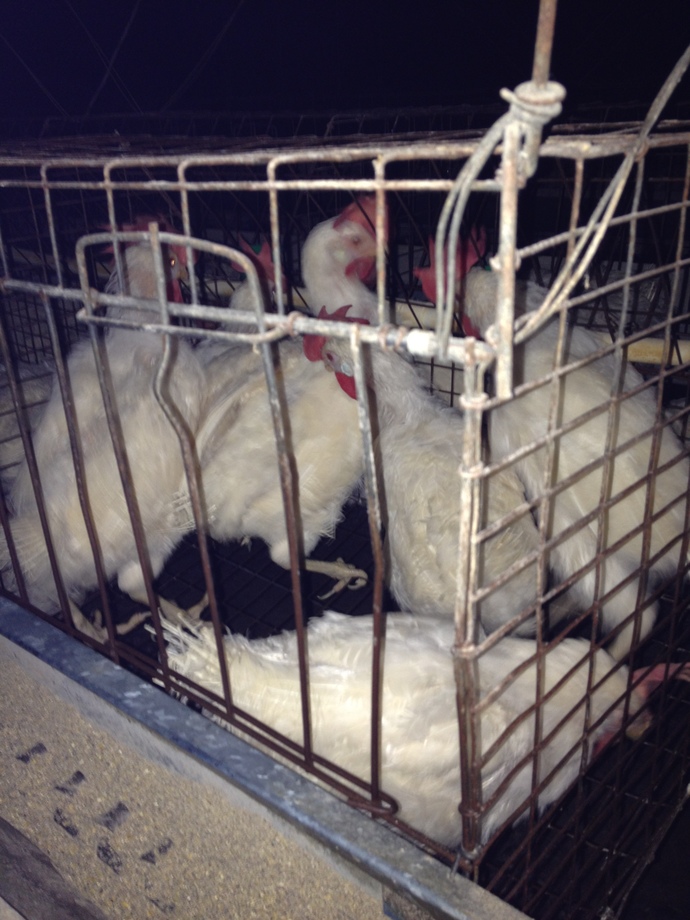 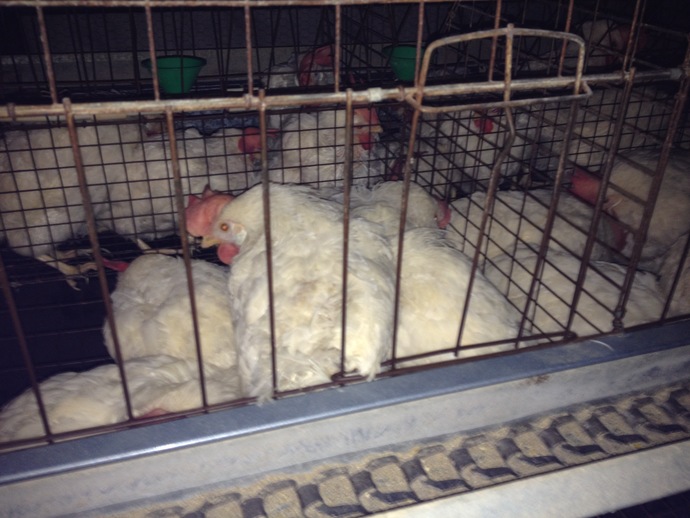 In 2008, California voted "yes" on Prop 2, which was designed to improve the conditions for animals like these hens in California. It was a huge deal—the entire egg and animal agriculture industry tried to stop it.

When I asked Paul about it he said:

“This farm is not in compliance with that Prop because the hens cannot flap their wings and they're on top of each other.” 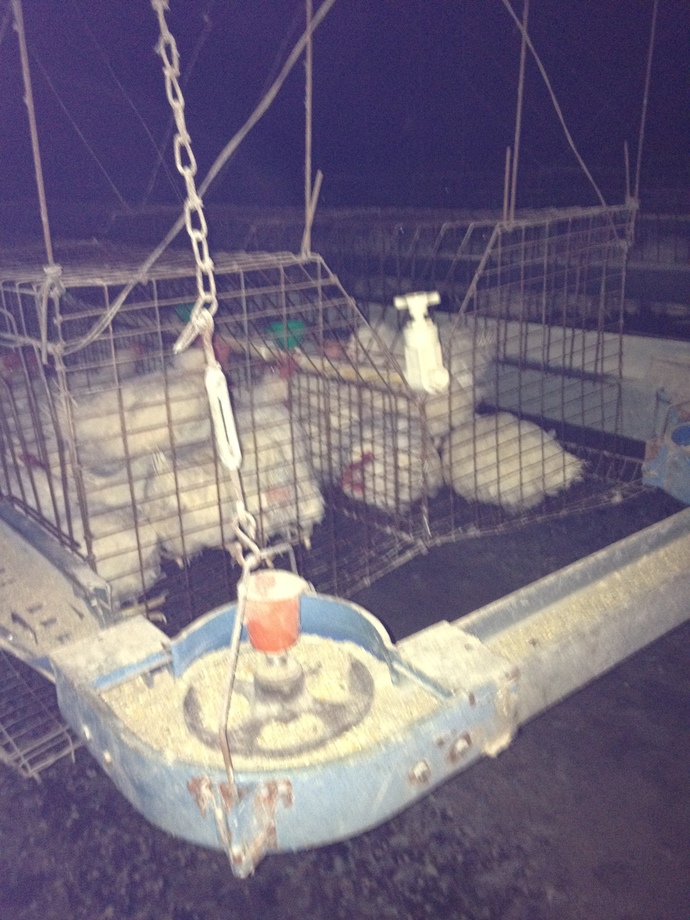 Finally, I debated for hours–for FIVE YEARS—about whether or not I should post this. Was it too controversial? Would it offend people? Would I go to jail? Would I lose everything that I've worked so hard for (supporters, friends, professional relationships?)

It came down to this: I have built this company and brand on doing what I feel is right, which sometimes includes saying things that are not always popular.

"If slaughterhouses had glass walls, everyone would be a vegetarian" - Sir Paul McCartney.

I've been committed to transparency from the beginning and this is a continuation and extension of that.

I hope that whatever you feel—whether you agree or disagree with me, whether you're inspired or appalled by my actions—you will do something about it. The more conversations we have, the better. We need to talk to each other. We need to hear each other out. We also need to hear viewpoints that are different than our own and challenge us. Differing opinions sometimes change my mind. They also sometimes strengthen my belief.

Lastly, I am not advocating or suggesting anyone "try this at home." This post is merely a retelling of my experience as a journalist.

UPDATE (5/1/17)email from Paul: "Thanks for shoutout to APRL! Btw the thrift store is actually the APRL thrift store, which funds all the organization's vegan outreach efforts. We may have to close it soon though, as the lease has expired and the landlord doesn't want to renew. We're fighting them on it so we'll see."