I went in a sensory deprivation chamber for 2 hours and... 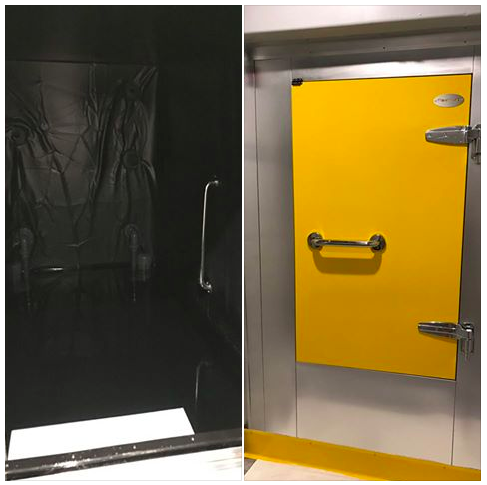 I first heard about sensory deprivation when it was used as a form of torture in a sci-fi thriller...

Except my OCPD/anxious brain thought it sounded... well, nice.

At least for a little while.

I get sensory overload constantly, see. Places like Times Square make my head throb. Crowds and commotion make me anxious. (Ever since I bought noise cancelling headphones (best investment ever) I live with them on. I also sleep with a sleep mask. That is a serious game changer folks!).

POINT IS a sensory deprivation tank sounded like pure bliss to someone who is constantly trying to remove sensory stimulus from her life...

The physical experience was very interesting.

Initially I got in and could feel the water around me and against my skin just like in a bath. Even with your eyes closed, when you're in a bath you know if any body part is sticking out of the water because you feel the cold air vs. the warm bath water

Except that went away.

The air and water temperatures are matched perfectly to your body temperature so you stop feeling the water and the air. I had to motion my hands around a few times to convince myself I was still actually IN water and not floating in outer space.

I also had to tell myself to "let go" about 5,000 times. I kept trying to "float" like I do in the pool or ocean, except there is no need. The concentrated Epsom salt water in the tank makes you buoyant without trying. (You won't roll over and accidentally drown in your sleep / la la state either. The water is a little like a viscous human jello).

Stop trying to float, Lindsay. You will just float. RELAX!

Eventually my brain accepted that and I did float.

What fascinated me the most was how I lost all feeling of my limbs. They weren't "asleep" (numb, pins and needles) but without environmental sensory feedback they sort of drifted away. I felt like a floating brain.

I remember thinking"I have feet but I'm not sure where they are."

Eventually it felt like I was stretching out to oblivion...

Which gives me the opportunity to add this: I felt a lot taller when I got out... like my spine had decompressed or something. Actually, there was a lot of cracking and popping when I was in the tank. It was glorious.

What amazed me the most was how much my brain wanted to DENY what was happening.

Have you ever had your eyes closed with the lights off, but then someone turned the lights on while your eyes were still closed but you knew the lights were turned on?

I was having that exact experience. With my eyes closed, I thought the lights were still on, and if I just opened my eyes, I would be able to see things. Then I would open my eyes, see nothing, and think "that's not right" and try again. There was "more light on" when I closed my eyes, which had to be my brain's creation.

It took a long time for my brain to accept I was blind. I really couldn't see.

A few others I talked to said they had a similar experience with sound -- they heard phantom noises, but that didn't happen for me.

Then I got bored. Really, really bored.

So I started meditating. (I counted my breaths to 10 then started over. Repeat).

Then I got really, really bored again.

You lose all sense of time in the tank. A minute can feel like an hour.

If I wasn't meditating I obsessed about being bored... Wondered how much time I had left... how was I ever going to make it 2 whole hours...

This made me come to terms with how over stimulated we all are at any given moment and how often I find comfort in distraction.

I willed myself to go to sleep... but couldn't. I think because I was naked (yes, you go in naked). I felt way too exposed to let my guard down enough to sleep.

I'm also not a back sleeper or a back layer. I take on a strange peacock shape, half on my side, half on my stomach, with limbs jutting out in every direction...

By the end of my session I had a lot of physical discomfort and I yearned to be able to get comfortable.

I was also a little sore the next day, which surprised me, but didn't. I sometimes feel "sore" after a massage or restorative yoga class.

My initial thought coming out of the tank was this:

I don't know that I ever need to be alone with my thoughts like that ever again...

Not "Oh I feel so relaxed" or "Wow my batteries are recharged!"

IF YOU THINK YOU'LL PANIC / GET ANXIOUS INSIDE:You will.

You'll have an all-out freak fest within the first 10 minutes (I did) but once you show yourself how easy it is to get out (a gentle tap and the door opens) and tell yourself that this is entirely VOLUNTARY, entirely within YOUR CONTROL, and that you can end it at any time, you'll be okay.

Claustrophobia?Hard to say. You never feel like you are in a confined space. The opposite happens: The space feels like it goes on forever in every direction.

My husband has a fear about being trapped in a box and did okay, if that helps.

The salt also dried my skin out worse than the desert. I exhausted an entire tub of coconut butter on myself over the next two days.

One VERY interesting "side effect" was how much more I wanted physical contact after the tank.

I'm not a hugger. I generally avoid physical contact with other people. I'm a "This is my space. That is yours" person but found myself craving touch and being a lot more affectionate for 24 hours after my float.

Should you try it? Absolutely. Spend two hours with yourself. Be curious about how you respond. It might be therapeutic for you!

A friend of mine says the effects last with him the whole week. He's calmer and happier and less stressed. Another friend said it took her three times (THREE!) before her brain and body connected the dots and she could achieve deep meditation and relaxation in the tank.