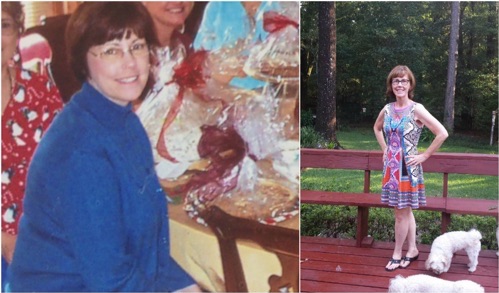 Meet our Herbie of the Week: Kim G!

Kim dropped major points with cholesterol, LDL and HDL levels, and on the scale. She feels fabulous and has kept the weight of for the first time ever!

Read Kim's story in her own words...

I began my plant based journey January of 2013. At first, I only stopped eating meat. I went for several months and didn't feel as great as I thought I would. I even gained 8 pounds, which upset me because I had wanted to lose weight. I should add, I've always been overweight and had yo-yoed up and down many times, working my way up to 172 lbs. several times.

About six months into the journey, my daughter told me to watch Forks Over Knives. I was amazed! It all made so much sense to me that I had to start. I stopped eating fake meats, dairy and eggs. Everything except cheese! That took a couple of more months but once I stopped the cheese, it changed everything.

Shortly after seeing FOK and several plant based cookbooks, I found Happy Herbivore. My first cookbook was EHH. Lindsay's recipes are so fast and delicious that I ended up getting all the HH cookbooks and following Lindsay's blog and FB page. Besides the great food, she is a great encourager!

A highlight of last year was attending the Food=Medicine Conference in Atlanta where I got to meet Lindsay and her parents! I'm grateful to have found the plant based way of life and thrilled that my family is mostly coming along for the ride too! Thanks!

Only recently have we signed up for Meal Mentor and we are really enjoying the recipes. I especially like the shopping lists and how it makes dinners so much easier on week nights. The Meal Mentor community is very helpful, non-judgmental and supportive. I've even lost a few more pounds!

Thank you so much Kim for sharing your plant-based journey with us!