Herbie of the Week: Gary W (A plant-based diet is helping him manage his symptoms from hyperaldosteronism!) 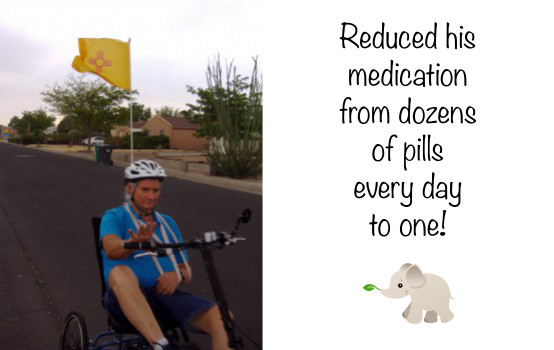 Meet our Herbie of the Week: Gary W!

Gary suffers from hyperaldosteronism and is paralyzed on his left side after suffering a stroke. He transitioned from a vegetarian to a plant-based diet and was able to reduce his prescription medication and now lives a healthy, active life. 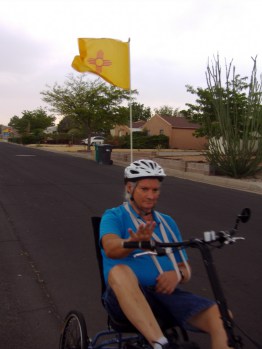 I had been vegetarian since the mid 90s. In April 2004, I was working in my shop when my left arm went numb. Someone suggested I go take a nap. Shortly after, I just collapsed. I heard a friend calling 9-1-1. The fire station was across the street. A young helper soon said, “Here they come! They’re here!” I never saw them. I was out. Gone. That is until 2 weeks later when I awoke in a hospital downtown Fort Worth, Texas with tubes everywhere. One doctor had written: “Prognosis: POOR” on my record. Another put a similar remark.The stroke occurred on April 16, 2004, I awoke on April 30; and on May 10, I was transferred to a nursing & rehab in Arlington, TX. Fortunately for me, the friend who called 9-1-1 visited me almost every evening or else I would have never made it. She worked hard to get me accepted by Veterans Affairs into the Transitional Care Unit, Dallas VAMC. There, the dietitian said I needed dairy to replace the protein if I didn’t eat meat.

Later, in November 2005, I cracked the top of my left femur in an unfortunate fall. This led to another 3-month stay at the VA. It was the same situation, only the doctor in the Transitional Care Unit ran tests until she discovered I had hyperaldosteronism which had caused my blood pressure to rise leading to the stroke.

In late August 2011, we moved to Albuquerque, Land of Enchantment, turning vegan at that time. In March 2012, I ran across a link to Dr. Joel Fuhrman’s Eat To Live group on Facebook.

I joined and then bought the Eat to Live book. At the same time, I ordered The China Study by T. Colin Campbell, PhD.

These are the Awesome books! Now, we eat a whole foods, plant-based (WFPB) diet low in salt-sugar-oil, primarily.

In May 2014, my total cholesterol was 141 with LDL of 63. These numbers are down from my previous days when I used to eat plant-sourced “foods” with saturated fats in them. I’m 62 3/4, my left side is still paralyzed from the stroke. I’ve sent plenty of WFPB info to my local VA doctor who has now gone WFPB herself!

Everyone—eat right, be healthy! Give yourself the opportunity to be healthy in body, mind, and spirit. You can help save animals, the planet, and improve your own health in the process, all while inspiring others to do the same. INSPIRE YOUR DOCTORS! Mine, at the local VA clinic is now in a position to help others be healthy without immediately resorting to the side-effect-prone pills that so many take… usually without question.

I have hyperaldosteronism and was taking dozens of pills every day. I now take only 12.5 mg of spironolactone for this, down from 100 mg a day that I was taking for several years. On most days, I ride a recumbent tricycle for 40 minutes to an hour or more. With doing this and adding a small amount of spironolactone, plus delicious Real Food, it controls the hyperaldosteronism quite well. My blood pressure shortly after riding the trike is generally about 120/80 to 123/83.

Thank you so much Gary for sharing your plant-based journey with us!