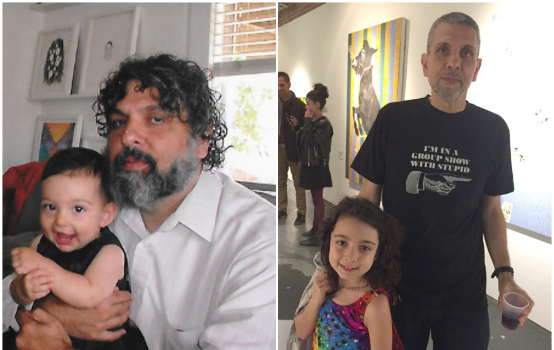 Meet our Herbie of the Week: Gary!

Gary is a very active member in the Meal Mentor community who is constantly inspiring other members and keeping smiles on their faces with his great sense of humor. (Gary will also be my co-pilot in the Meal Mentor Co-Pilot Podcast this Friday. Listen Here.)

He suffered from fatty liver disease, gallstones, and fatigue and was later diagnosed with MS. He credits a plant-based diet for regaining his health and has now lost 90 pounds!

There's so much more to Gary's story, so I'll let him take it away! 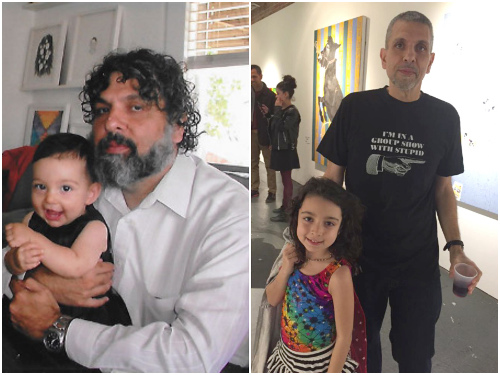 I'm a conceptual artist living in Los Angeles but I grew up in Chicago where the air seemed to be flavored like Italian Beef and Sausage. I would put away three Al Pastor Burritos with Cheese, Avocado, and Sour Cream a week from my favorite restaurant. In my twenties I was big and worked as a bouncer, albeit a gentle one.

I would occasionally suffer horrible bouts of stomach pain that lasted eight, nine hours at times. I always assumed that this was heartburn. I tried over-the-counter medicine, but nothing worked. I was sure this was from something I was eating, but I could never pinpoint what. This continued after I moved to LA in 1998. The cliché I had always heard of Los Angeles was that it's a health food mecca but I never found this to be true; I've never seen as many doughnut places as I've seen in Los Angeles but I digress. 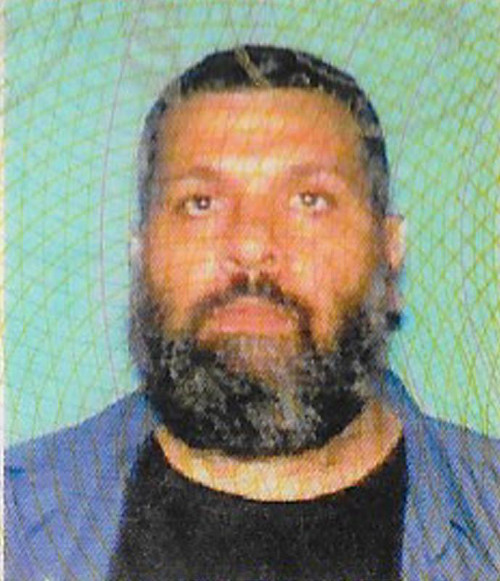 At my highest I weighed about 260 pounds, had fatty liver disease (even though I was a non-drinker at the time) while still suffering those horrible stomach aches. I suffered a swollen optic nerve in 2004 that remained undiagnosed after numerous MRIs, CT scans, and a Spinal Tap (trust me, a real Spinal Tap is not fun like the movie). Anyhow, one evening, I woke up in the worst pain in my life, I drove myself to the hospital, I was out of my mind in pain. The hospital staff believed I was an addict trying to get morphine, finally I convinced them to do a test and they found huge gallstones in my gallbladder (which is where one usually finds them but I'm sure you all know that). I had just had a daughter and feared not being around for her, not being able to play with her, I was sluggish, always tired. I had recently had an Aunt that had passed away from stomach cancer and there's a history of heart disease in my family. I was scared. I agreed to do the surgery but would have to wait a month. I asked the doctor if there was anything I could do to stave off attacks until then and he said to try to not eat so much fat.

I cut out dairy and red meat first and miraculously it not only alleviated my stomach aches but I started losing a lot of weight. I started walking during my lunch breaks, and more and more came off. Things seemed to snowball. I learned about this mysterious substance called "fiber" that most Americans haven't heard of and ate more fruits, vegetables, beans, and whole grains. I did have the surgery but there was no turning back. My fatty liver disease was gone. I knew nothing about nutrition but I knew that what I was doing was having an effect.

I heard about Forks Over Knives while scouring the Internet trying to learn more about nutrition. My concept of veganism up to that point was based on mock-meat products and not the simplicity of the whole food plant-based approach. I rented the movie (Forks Over Knives) but I must confess that I saw only the first twenty minutes because I was immediately convinced (I did read The China Study cover to cover though, so I should get some brownie points there). I identified as a vegan from that second. I was very influenced by Lindsay's books and nutritionfacts.org which provided me with the day-to-day how and the why. My weight got down to about 170 lbs. which was the higher end of normal for my height. I discovered that a lot of people I knew immediately turned into nutritionists and were suddenly concerned with my health as my BMI dropped into the normal range. When I told my mom I was a vegan she said, "that's OK, we can just cook Chicken when you visit," but when I explained to her what it meant she said "we'll just cook like we did during the war" (my parents grew up under Mussolini's Italy on a diet of beans, pasta, and veggies). The transformation was dramatic, I don't think people were prepared for the new me. People used to call my "Gare Bear," my basketball nickname was "The Silky Burrito" (smooth moves from such a big guy).

I was feeling great, had more energy, was able to meet the mental and physical demands of parenting, and then the other shoe dropped. One day I was giving a slide lecture of my artwork at The School of the Art Institute of Chicago, and I developed an incredibly horrible headache around the eye that previously had the swollen optic nerve. My neck grew numb and over the course of a month my entire body was tingling. I had trouble balancing when I walked and collapsed a few times walking the same route I had been doing for years. I was diagnosed with Multiple Sclerosis and was told that, based on the lesions on my MRIs, I had actually had it for about ten to twelve years. When I told my neurologist about the swollen optic nerve he said that had been my first attack. I was put on steroids but in the meantime had lost all my energy.

Although my MS symptoms subsided, I exercised far less, started eating a crappier (can I say that?) higher fat version of vegan, became depressed, started drinking more and more, and got myself back up to 200 lbs. My growing weight upset me, something I rarely hear word of in the WFPB community is that when you claim to be eating a Whole Food Plant Based Diet you sort of become an ambassador of this mode of eating and I wasn't keeping my end of the bargain by consuming so much fat (chips, oil). I don't try to argue with people about the way I eat, I just try to do my best and hope that my best is a good example to those who are interested. But I knew I wasn't giving my best on a lot of fronts, and what's worse, the fat was not good for my MS. The fatigue from the disease was unbearable.

Over the course of a year I made a couple of half-hearted attempts to right my ways and recommit but it wasn't until a chain of unfortunate events that things began to turn around. I started biking, but in the span of one week my bicycle was stolen, my stationary bike broke, and my car got towed. I was demoralized. Exercise is so important to MS sufferers for future mobility and cognitive health (to prevent brain shrinkage) and it seemed that the moment I got serious everything got taken away. I felt like I was at a do or die moment.

Amazingly a friend started a Gofundme campaign for me to replace my bikes and pay for the towed car. The campaign was successful, and I was able to quickly replace everything. The bike was important to me symbolically; many online articles about MS show a stock photograph of an empty wheelchair, a scary image. I thought of the bike as my anti-wheelchair, the thing that would help my future mobility. I knew my friends had my back, it was a great feeling. I turned on a dime and two months later am at the fittest point in my life. On any given day I may ride to and from work, ride 60 miles on an elliptical device under the desk of my cubicle at work and do 200 push-ups throughout the day. This makes me more conscious about what I put in my mouth: beans, veggies, potatoes, fruits, and whole grains. 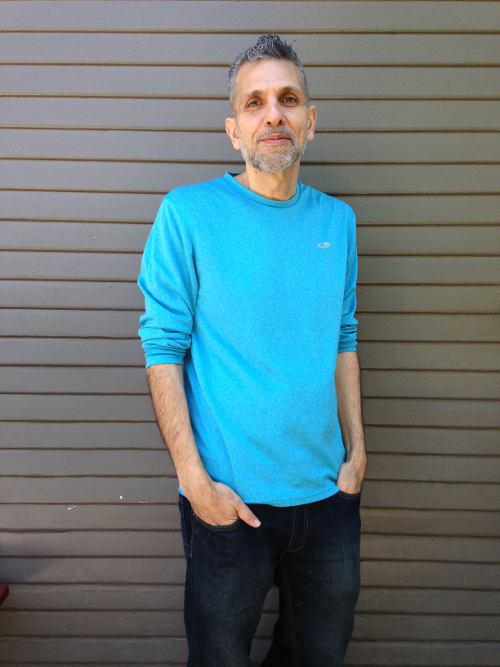 I thank Lindsay for the inspiration and acceptance of non-perfection (and the recipes, of course).

Thank you so much Gary for sharing your plant-based journey with us!

I'm still going strong, I feel like I've hit my target weight and as anyone who has gotten there will tell you, maintenance mode is hard, these are the times where bad habits creep back in. I'm trying to limit my eating to a 7 a.m. to 7 p.m. window, endless late night snacks have done me in in the past. It's fascinating that this (a twelve hour eating window) is considered a form of "intermittent fasting" (though by far the easiest) by The New York Times which maybe says something about American eating habits when a completely natural eating cycle is considered a "fast." I continue to exercise for my MS: I do 250 diamond push ups five days a week, cycle between 40-60 miles five days a week between the road and machines (I supplement my street riding with an under desk elliptical and an indoor bicycle for those infrequent Los Angeles rains), and am taking up Pilates. I haven't had an MS flare-up in three years, I attribute it to eating with a Whole Food Plant-Based approach (not a diet, I never feel hungry), these are the foods my body craves, these are the foods that satisfy me, these are the foods that make me feel good.