Herbie of the Week: Gin (A Plant-Based Diet Saved Her Life!) 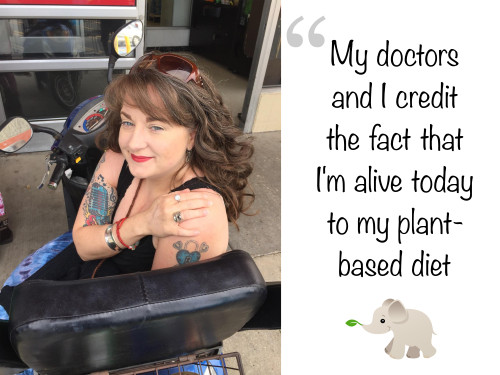 Meet our Herbie of the Week: Gin! (A Plant-Based Diet Saved Her Life! AND her EPIC results made THREE of her doctors go plant-based!)

She suffered a heart attack due to stress from a pain disorder. Then 3 of her doctors went plant-based after seeing her amazing post-heart attack angiogram! 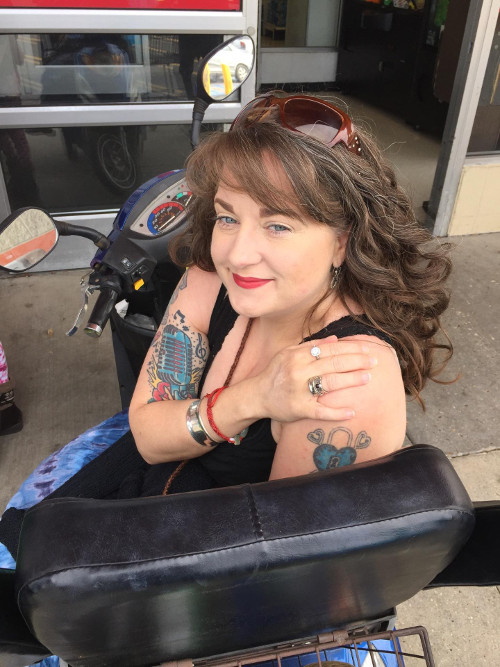 I have been vegan/plant-based for 15+ years now. Due to an injury a few years ago, I'm battling a pain disorder that has disabled me and find myself under a great deal of stress due to circumstances surrounding the disorder. Last March, one morning at about 2AM I began vomiting uncontrollably. This continued for 9+ hours before my roommate decided I needed an ambulance. I was so sick that I could neither speak or move from the loo. By the time the paramedics got there, I couldn't even stand up enough to use my crutches to get down the hall and had to be carried to the stretcher. As the paramedic was hooking me up to monitors, machines and IVs she just happened to look up at the monitor and watch my heart stop. I had had a heart attack. I have no family history, showed no signs had no chest or arm pain. Nothing. I was vomiting and couldn't stop. I was sure I had food poisoning or was reacting to medications for my pain disorder.

At the hospital it was chaos. Eventually a Dr. came into my room (it was 2AM by this point. The ambulance was called for me at 11AM the previous day.) and asked if he could call my father. I heard this man tell my father that all of my arteries were blocked and 2 chambers of my heart were down, that he didn't know yet if they were going to crack my chest or if my father needed to pick out my grave and plan my funeral. I sat up in the bed and cursed that man out! I am vegan and have been for many many years! I've been healthy aside from this pain disorder! There is NO WAY I had blocked ANYTHING let alone all of the damage they were speaking of! The doctor just looked at me and shook his head.

Around 7AM I was taken for an angiogram. They determined that my veins, arteries and chambers WERE PRISTINE AS A NEW BABY'S (direct quote from the doctors) and that my heart attack was entirely caused by stress and grief over the pain disorder and the effect its had on my life. They diagnosed me with Broken Heart Syndrome. Yup, a broken heart nearly tipped me over but BEING PLANT-BASED SAVED MY LIFE. The doctors were amazed and 3 of them that day converted to a plant-based diet. One of them is working with a dietician to have healthy TASTY veg options added to the hospital menu. (My hospital is a nice one and well funded so it's like staying in a hotel with doctors and nurses. I was given a room service menu which was sadly lacking in plant-based options so hopefully if I'm again admitted for anything they will have improved in this aspect).

The good news is that with time, with meds and supervision of a cardiologist, my heart will heal. My doctors and I credit the fact that I'm alive today to my plant-based diet and the one paramedic who just happened up glance up at the right time.

Thank you so much Gin for sharing your plant-based journey with us!

While I'm still battling CRPS (pain disorder) my heart is doing fantastically! At the time of the heart attack, I was put on ACE Inhibitors and Beta Blockers. Due to my diet alone (unable to work out currently - doc's orders) after less than 60 days I was taken off of the ACE inhibitors and at my next check up (over a year after the heart attack) I expect to be taken off of the beta blockers and told that my heart has completely healed.

People that want to argue that plant-based diets make no difference are crazy. It's the only reason I'm alive today. The doctors have said that the heart attack was so severe that ANY amount of plaque in my veins would have killed me. So now, I turn my focus back to using my diet (anti-inflammatory foods, etc.) to cure or push into remission a disease that is not only the most painful known, but also 'incurable'. I don't know how yet, but I intend to prove every single doctor wrong and find a way to get better...just obviously not via meds and chemical treatments.