Herbies of the Week: Jean & Scott (A Plant-Based Diet Saved Their Marriage! They're also off 11 Medications & Scott Ditched his Insulin Pump!) 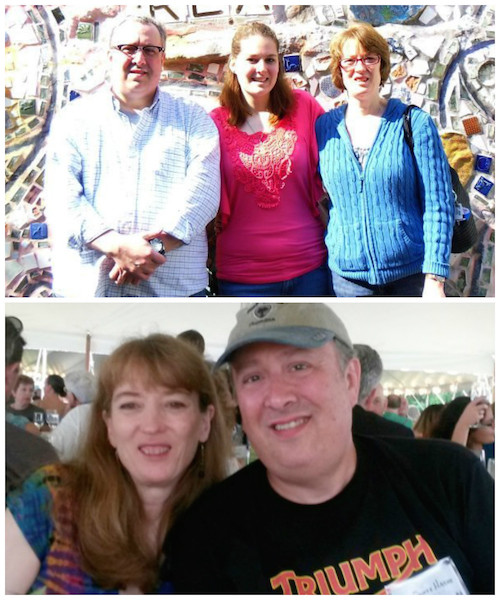 Meet our Herbies of the Week: Jean & Scott!

Jean & Scott's plant-based journey started back in 2012 after Jean watched "Forks Over Knives" and was surprised by all the research she didn't know especially since she was a nurse!

Jean considers the last 3 years "nothing short of a miracle", because not only did their plant-based lifestyle save their health (Scott came off 9 medications, ditched his insulin pump, and reduced his insulin intake while Jean lost 30lbs and no longer takes medication for anxiety and heart palpitations), but it also SAVED their marriage!

Here's Jean & Scott's story in their own words...

My family’s adventure into plant-based eating started in the Fall of 2012 after my friend Sarah told me about a documentary she was afraid to watch. Her friend Brittany had been telling her how it had changed her life and she wasn’t prepared for any major life changes. From what Sarah told me, I thought this documentary might be about animal rights. She works with animal rescue and had been thinking about reducing or eliminating animal products from her diet. I decided since I loved documentaries I would watch this one for her. The documentary was “Forks Over Knives” and I will forever be grateful to Brittany and Sarah for this casual conversation that totally changed our lives!

As I watched "Forks Over Knives" I kept thinking, this makes SO much sense, why didn’t I know about all of this research? I am a nurse after all; I should have known! It made so much sense to me, in fact, that I decided right then and there that this was the path for me. Now I just had to see what my family thought. I asked my daughter Annabelle first and she said of course she would try this way of eating. After all, she had asked me if we could be vegetarian back in middle school and I blew her off! Oops!

Next was my husband, who was relaxing in his recliner chair, probably dreaming about a pastrami sandwich. I approached him slowly, told him that Annabelle and I were going to jump into this new way of eating to improve our health and carefully asked him if he wanted to join us. I held my breath and then almost fainted when he said, “Ok.” Afraid to ask any more questions or offer any more explanations, we quickly got into the car and went off to the bookstore to purchase the Forks Over Knives cookbook. We were thrilled to find it quickly along with Dr. Esselstyn’s book, “Prevent and Reverse Heart Disease.” We had a cup of tea and a sandwich at the bookstore while we made a shopping list using the FOK cookbook as our guide. It had suggestions in the beginning of the book for staples to purchase and we chose several recipes we wanted to try.

Our first plant-based grocery trip was a great adventure. It was like we were seeing a whole new store. We shopped in aisles we had never noticed and skipped so many of the aisles we traditionally perused. It took some time to find some things we weren’t familiar with, like nutritional yeast, and tofu but we had a lot of fun finding everything. That night, November 24, 2012, we made our first plant-based dish and haven’t looked back since. We have loved all of the new flavors and new foods that we missed out on when the meat was the star of the meal.

For the first couple of months, I continued to sit with my new cookbooks every other Saturday morning and plan out our meals until the next payday and then head out to the grocery store. For the first time in years, I was enjoying shopping and enjoying cooking more than usual. Every dish had new flavors and was a new adventure. 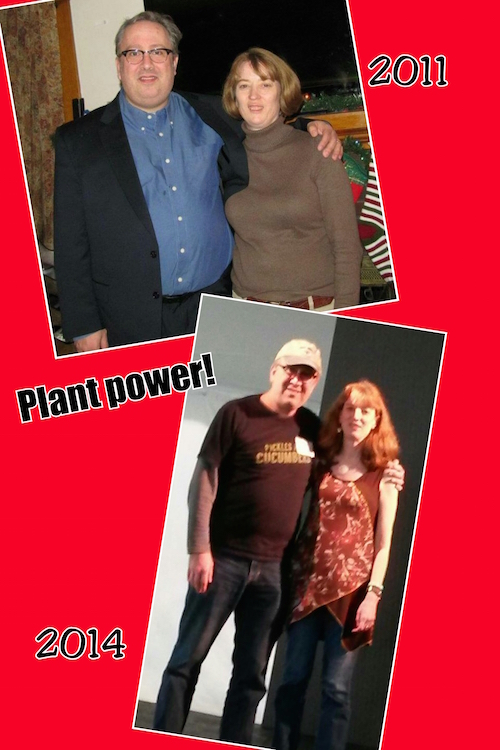 Despite his lack of excitement about being plant strong, my husband was going along and liking the new foods. He had been fit and trim in high school, loved to bike and camp, and kept his weight on target. When we started dating, my family, who loved to eat, would coax him to finish the mashed potatoes at Sunday dinner and he gladly complied. He loved Canadian bacon hoagies and cheese and sausage and pepper sandwiches. By the time we had been married almost 2 years, we were both on Weight Watchers as eating and cooking together was one of our favorite hobbies. Just when he was getting his weight close to 200 lbs, I got pregnant and since I was no longer planning his meals and measuring his portions since I had horrible morning sickness, the plan went out the window and the weight came back.

Four years later in 1997, Scott began having trouble with feeling excessively thirsty and getting up frequently at night to urinate. You guessed it, he had developed Type 2 diabetes. Things went downhill from there, arthritis in his knees and back, and depression. He took all the medication the doctors prescribed, then went through periods of stopping the meds because of side effects and frustration that he didn’t feel they were making him well. You can imagine that as a nurse, this did not make me happy. His health problems and what I perceived as his lack of effort and disinterest in caring for himself was a huge source of conflict and strife. If it were not for the reality that we could not afford to live apart, we would no longer be together to tell this story. So, when my chronically ill husband said yes to eating a plant based diet, you cannot imagine my excitement and surprise. I contained my excitement and restrained myself from asking why. Recently, I finally asked, “Why did you say yes?” He simply answered that he figured what he was doing wasn’t working and if he didn’t like our food, or if I gave him too much of a hard time about the whole thing, he would just go back to eating the way he always did.

This past 3 years has been nothing short of a miracle to me. Not only did my husband stay with us on this journey, but when he was still struggling after 6 or 7 months with some food addictions and needed more guidance, he showed interest in going to Dr. McDougall’s 10 day program to learn more and get fully on board. He was on an insulin pump, 10 other medications and was having trouble losing weight and controlling his blood sugars. In June, he attended the program and came home “with religion” as he says. He now talks to people about his lifestyle, has lost weight, eliminated 9 medications, is off the insulin pump, has reduced his insulin intake, and looks and feels better. His Hgb A1C, which is a 3 month average of blood sugar dropped between 3 and 4 points in the first year of changing his diet! His family MD at home was so excited to see the improvements he has made that she wanted more information so she could tell her patients about his diet and the program he attended.

I have been able to stop a medication I was taking for heart palpitations (frequent premature ventricular contractions), and one for anxiety and now only need an iron supplement and vitamin D. I have lost 30 lbs and weigh less than I did in high school and when I got married. My cholesterol is 120 and I think I can declare myself heart attack proof now!

My daughter Annabelle was suffering from severe abdominal pain after her gallbladder surgery that the MDs feel is from a sphincter dysfunction, however the diagnostic study and/or treatment have a 50% chance of causing debilitating pancreatitis. They had no recommendations except for a couple of medications that did not help. The gastroenterologist was excited to hear at our last visit that her episodes of pain have been greatly reduced with her new diet and she was going to check into this way of eating, too!

My son Ben, who lives in Philadelphia, has told me he is sure the science is sound to support plant-based eating, and he is showing some interest as he thinks our food is pretty tasty and he noticed he felt better when he ate this way when he was home visiting! 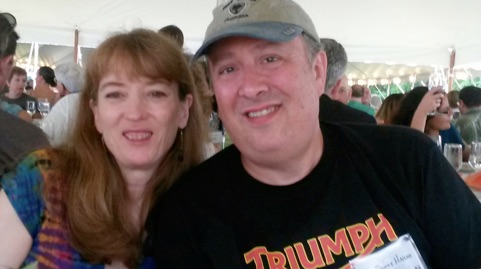 In addition to improving our physical and mental health and saving our marriage, I credit plant-based eating with helping us to make new friends and be more open to new ideas and adventures. I started a local plant-based eating group and also participate in a group that meets monthly near our home for pot lucks and support. Scott and I taught a plant-based eating and cooking class in a community classroom last Spring and I led another one this past Fall. The classes filled quickly and we had a great time. In November 2015, a new group, The Scranton Beets (#NoMeats), met at our home and with the support of Plant Pure Nation, we hope to spread the message of health and hope through plant-based living in 2016.

I don’t know where this adventure will lead us in the coming months and years, but I have no doubt that it will be as wonderful and exciting as the last 3 years have been! Thanks to everyone who has helped us along the way including Lindsay Nixon and her wonderful Happy Herbivore recipes and her positivity and enthusiasm for the plant-based lifestyle!

Thank you so much Jean for sharing your and Scott's story with us!