Herbie of the Week: Janet (She Lost 40lbs By Following the Meal Plans!) 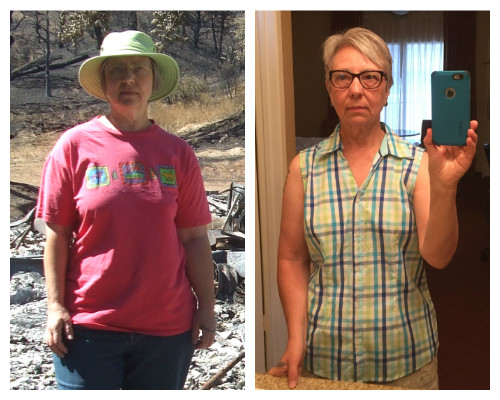 Meet our Herbie of the Week: Janet!

Two years ago Janet was overweight, not eating healthy and stuck in a food rut when she discovered the meal plans and decided to give them a try.

Slowly but surely, she started to lose weight and within a year and a half of following the meal plans she was down to 130lbs (which she never thought she'd see again!), had fewer stomach aches, sleeping better and started running again!

I'll let Janet take it away...

I started using the meal plans about two years ago. I was already mostly vegetarian, but had been wanting to go entirely vegan and wasn't sure how to go about it. I don't really like cooking, and I don't have much imagination when it comes to planning meals, so I felt like I was in a rut and not eating very healthy, even though I didn't eat meat. I found the meal plans by searching online and decided to give them a try.

I was overweight at about 170 lb, and knew I could stand to lose some weight, but my main purpose was just to get a more healthy/varied diet. I followed the individual plans when I started, and liked having all my meals and shopping lists spelled out for me. I have a small kitchen and not a lot of small appliances-I live off the grid, with solar electricity, and have to watch my Watts, so I avoid anything that uses electricity if I can. My stove, oven, and refrigerator all run on propane. I have a blender and microwave that I use occasionally, but no toaster oven, food processor, pressure cooker, or anything like that. Some things are less convenient, but I don't mind doing things the "old-fashioned" way. (I don't have a washer/dryer, either-I wash clothes by hand in a wash tub & wringer, and hang them on a line to dry.)

I never followed the meal plans 100%, but after a while I started losing some weight. It was slow, but I figured as long as the weight was gradually going down rather than up, I was happy! After about a year and a half, I got down to 130 lb, which I never expected to see again -- I'd have been happy to just get back down to 150! I went from size 14 jeans to size 10.

Once I got down to 130 lb, I decided I was at a good weight and could stop trying to lose any more. I still use the meal plans, but now I add fruits, rice, potatoes, and such. I also switched from using the individual plans to the family plans. I don't mind leftovers, and found it much easier to just cook three meals a week. I generally eat oatmeal with fruit for breakfast, then use the meal plans for lunch and dinner.

I also started exercising again, beginning with the February Step Challenge, which inspired me to start running again, and now I'm training for the Long Beach Marathon in October. I am one of the world's slowest marathoners, but I enjoy getting out there and plodding along. I'd stopped running after my last marathon, in 2008, because the weight was dragging me down and I was just getting too slow, even for me. Now, I weigh 10 pounds less than I did for my very first marathon, in 2001, and am hoping to beat my time in that one.

Thank you so much Janet for sharing your plant-based journey with us!

About a month before the Long Beach Marathon, I switched to the half marathon instead the full marathon, because the temperature was in the 90s for most of the summer, and I was having a really hard time getting my long training runs done before the heat of the day did me in. I thought it would be better in Long Beach -- but it hit 90F there on the day of the race, too! It was a hard race, and my time was pretty slow, but I finished! Now I'm training for the Surf City Half Marathon on Feb 7. Hope to do better next time.