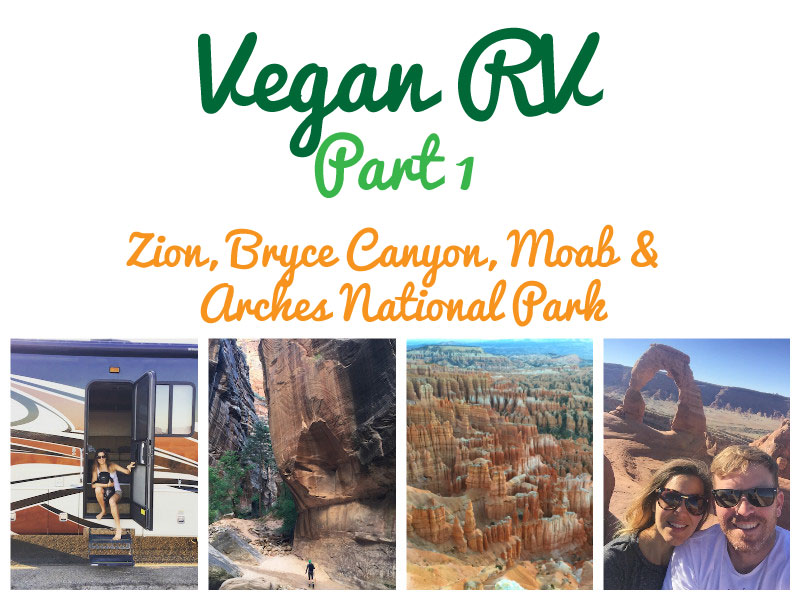 Scott, the pugs & I are just back from a 15-day RV trip through Utah and Arizona. 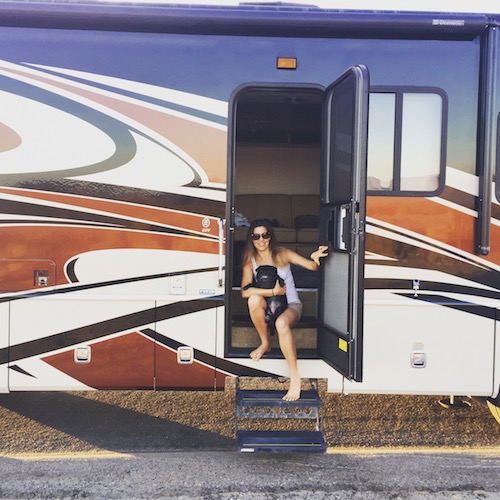 It was our first time RVing and I'll include our thoughts on the RV experience and the pros and cons in a future post.

FYI, This post is just a bare snapshot of our adventure.I posted the trip in real time on Instagram so check that out for more pictures of our travels and the parks, as well as seeing all of the foods I made in our camper!

Consider this post more 4-1-1 informative for trip planning than picturesque.

FOOD:Since we were on a strict budget, I cooked in the camper (details and recipes in a future post--make sure to subscribe to the newsletter so you don't miss it!) but we did take care to look at menus at local restaurants and campground lodges whenever we could to see what options would be available for vegans and plant-based campers.

We hiked the Narrows, which is THE trail to experience in Zion. 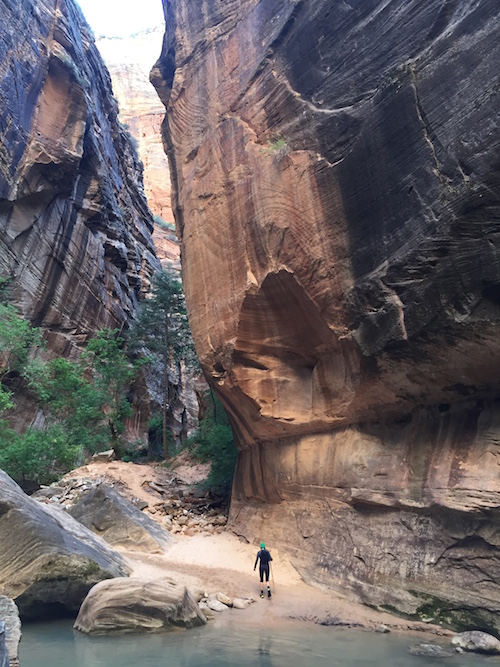 We slogged through the Virgin River all the way from the Temple of Sinawava to the Waterfalls (which is worth the added distance after Wall Street imho), and then detoured to Orderville Canyon on our way out. 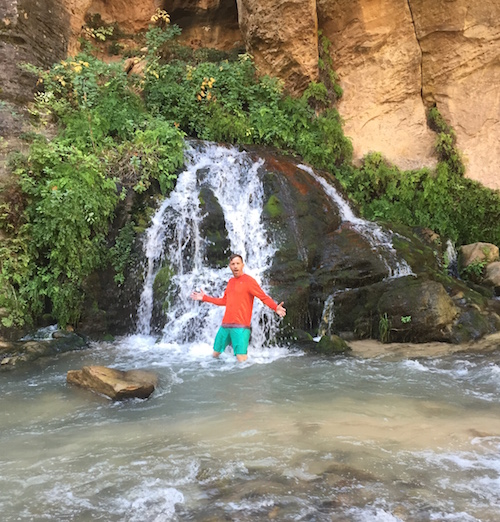 It took us about 6 hours total, but that included a very long stop for lunch, and walking an extra mile because the shuttle wasn't in service. To be certain, it's an all-day event and exhausting even for a fit body, but an amazing experience.

If you're planning to hike the Narrows, spend the money to rent the special shoes, aqua socks, and walking stick. Also get up as early as possible and on the very first shuttle. Not only will you have the trail mostly to yourself, it's 1000x more stunning in the soft, early morning light. YES it is wet and cold.

If you're a casual hiker, there are a few gentler and paved trails in Zion, but most of the famous trails are moderate to strenuous (and long!) and several hikes are technical (canyoneering, climbing and/or rappelling experience required).

Eats:Unlike a lot of other Parks, Zion sits next to a fairly populated town, so there are dozens of shops, cafes, and restaurants all within a short walking distance.

I was pleasantly surprised to see nearly every restaurant and cafe had "vegan" and "vegetarian" options clearly marked on their menus. You could even find non-oatmeal breakfast options like tofu scramble at Cafe Soleil, and most coffee shops offered almond and soy milks.

If we'd had money to spend on dinner out, I would have ordered the spaghetti squash enchiladas (vegan-adaptable) at Whiptail Grill. That sounds so cool!

BTW, there's also a small, independent grocery and health food store, Sol Foods, with many "fast food" options for vegans like microwave burritos, plus specialty items like vegan "jerky". They also have many special "gluten-free" items!

The Hoodoos remind me of all the drip sand castles I made at the beach as a kid! They're really cool to see and BEST viewed in the soft light of dawn or dusk.

We did the Rim Trailfrom Sunrise Point to Bryce Point (I would recommend going in the OPPOSITE direction--Bryce to Sunset--which would be predominately downhill). 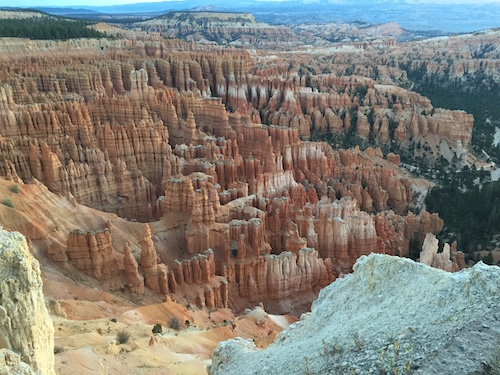 We also descended down in the canyon via the Queens Garden Loop. The loop took us about 40 minutes and the Rim trail took us about an hour and a half, though we were hoofing it uphill the majority of the way. 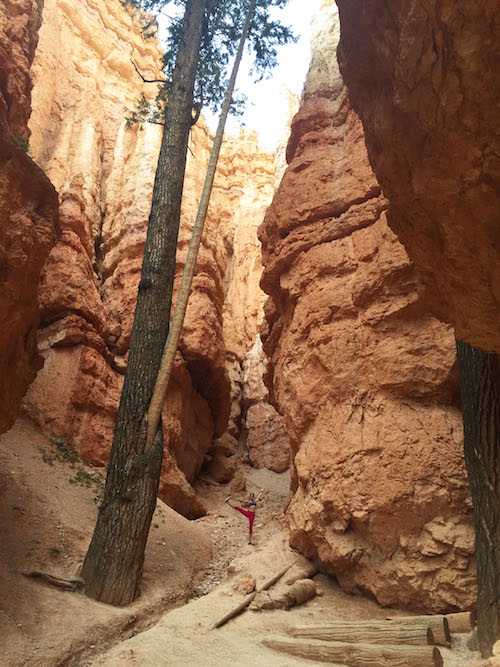 We watched sunset at Bryce Point and sunrise from Inspiration. Both are excellent spots, though I can't imagine there being a bad view anywhere!

All of the trails in Bryce are well paved and highly manicured. I wouldn't consider anything "strenuous", save for the occasional upward rolling hill, making it a great destination for families with small children or families with older relatives who have limited mobility. After the rough-n-tough Zion, Bryce felt very "sidewalk" sweet.

You can also see a TON of Bryce Canyon by car or bus (with parking at the various viewpoints and lookouts). 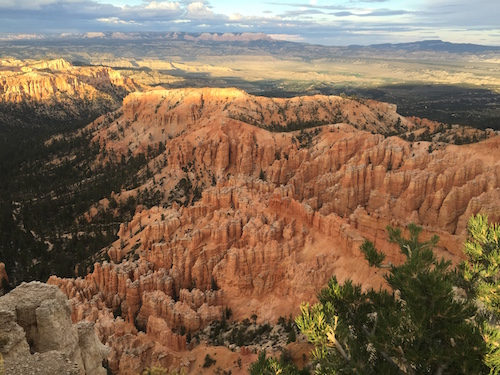 There is a Lodge Restaurant inside the Park, with several vegan options (see here). There's always a salad bar at lunch and dinner, but they also serve a braised portobello sandwich, a tempeh bacon "BLT", a vegan burger, AND they will substitute gardein chicken in any of their meat dishes by request.

I did think the prices were pretty high ($15 for the all-you-can-eat salad bar, $10 for the burger) though not unexpected or unusual by comparison.

There's also a little "store" in the park, though it doesn't offer much, mostly bottled water and sodas, chips, crackers, cookies (the typical stuff you'd see at a gas station) but they DO sell VEGAN HOT DOGS. 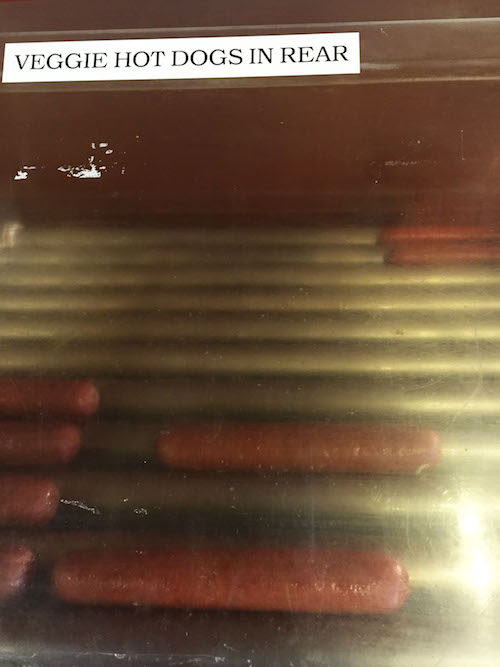 I have never, in all my life, seen a vegan hot dog on one of those rolling hot dog rotisseries and almost (almost!) bought one simply for the novelty.

A few miles outside the park is Ruby's Inn which has a much bigger general store with a small produce section (apples, lemons, bananas, lettuce, tomato, zucchini, potatoes, peppers, onions, garlic, and a few others) plus a good assortment of canned foods and boxed goods like pancake mix, along other basics like bread and peanut butter. They also sold hummus and almond milk! I thought the prices were pretty reasonable for most items (I bought a huge onion for $0.69).

There are also three restaurants at Ruby's Inn, though I think most vegans would find the options pretty limited.

After days of hiking, using my upper body to climb rock was a welcome change!

I also finally did something I've always wanted to do: squish myself through a slot canyon. (Thanks to the meal plans I was finally trim and healthy enough to take on this activity!)

Most of the slots and crawl spaces were so tight I had to push my pack through before me, so I don't have a ton of pictures -- but here is me going into one: 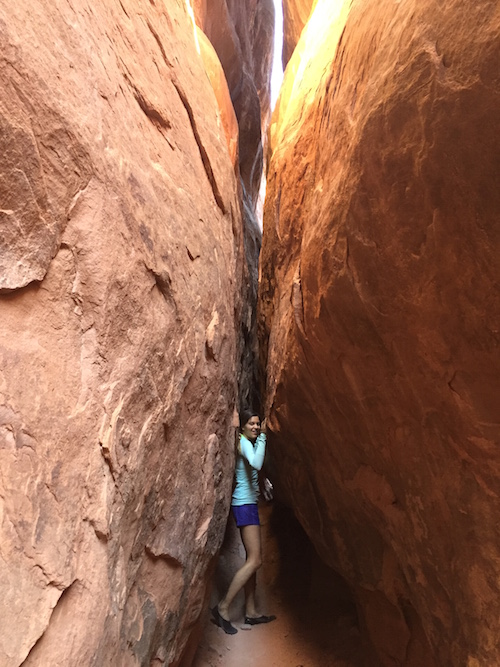 We also took a 3-hour guided tour through the Fiery Furnace with Moab Adventure Company. It's incredibly easy to get lost in there, and leaving cairns is heavily frowned upon, so if you want to hike or climb around in the FF, go with a professional. I had a great experience and was glad I'd budgeted for a tour.

We also hiked to the famous Delicate Arch (no permit or tour guide required). It took us a little over an hour round-trip, including a 10-minute break at the arch for pictures. It's moderately strenuous, but worth the effort. You can take your time and rest often if you need to. (Try to go early in the morning or late in the afternoon when the sun isn't frying you alive!) 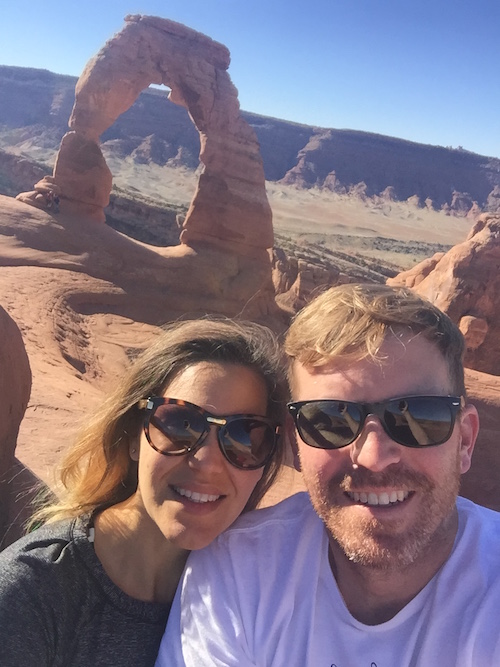 Arches is also extremely car friendly (though not without a long wait to get in) and nearly all of the famous spots are accessible by car. Most of the trails are pretty easy, and unlike a lot of other parks, there are tons of bathrooms!

Downtown Moab is about 10 miles from the Park where you'll find shops, an insane amount of motels, and about two dozen restaurants.

Curiously, the majority of restaurants open early for breakfast but close after lunch and are tiny--more like coffee cafes. Everything else pretty much opens up at 5pm for dinner. Not a big deal, but worth noting.

We didn't find a lot of restaurants that specifically catered to vegans (see those that do below), but the town has your typical options like pizza, Mexican, Italian, Thai, sushi, etc. so vegans can find plenty to eat in Moab, though the prices seemed pretty high overall...

The Love Muffin Cafe had vegan muffins, a vegan breakfast burrito and some modifiable wraps, along with almond milk. (They also noted GF options). Eddie McStiffs offered a pizza called "The Vegan" and a Miso Tofu Wrap. A few other menu items were adaptable too. (They also indicated GF options).

There was also a juice bar in town and a few places that offered "homemade veggie burgers" but I did not inquire if they were vegan or not.

There is also a general store in Moab with a pretty good size grocery section. There wasn't a ton of fresh fruits or vegetables for sale, but there was a wide selection of pantry items. I even noticed several specialty items like brown rice syrup!

This concludes part 1 of my RV Trip review. Stay tuned for Part 2 covering Monument Valley, Sedona, and the Grand Canyon!