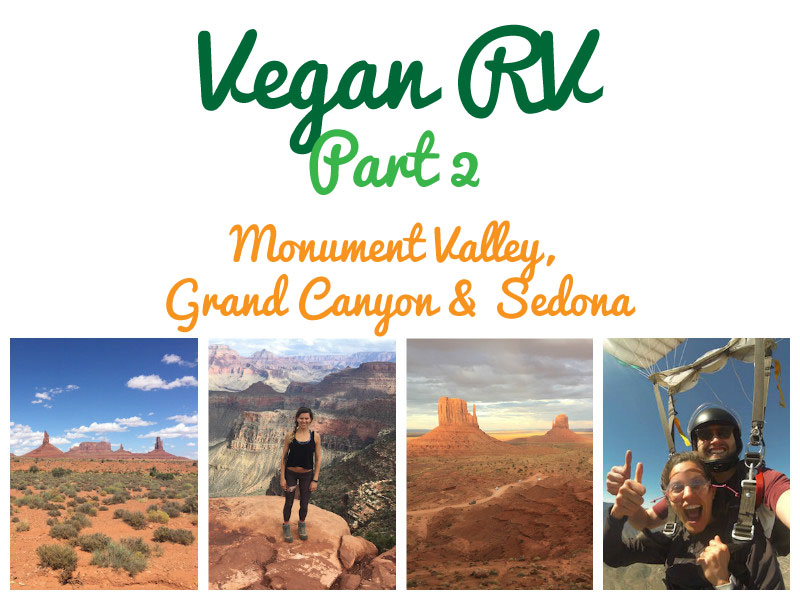 Scott grew up watching Westerns (and took a class on John Wayne in college) so Monument Valley was a must stop for us on this trip.

The Wildcat Trail was my favorite hike on the trip. It wasn't strenuous or particularly challenging (it took us 1.5 hours at a slow pace), and there was no grand viewpoint vista at the end, but my gosh was it beautiful!! I felt like I was walking in a painting! 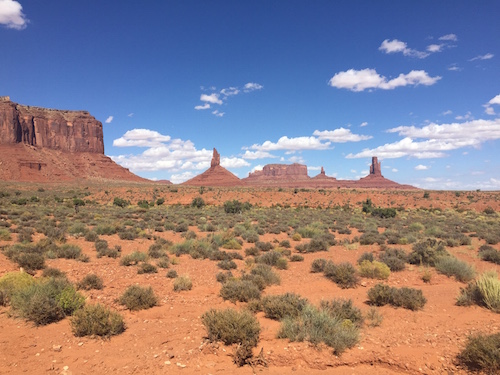 I so wish we could have afforded a hot air balloon ride!!! 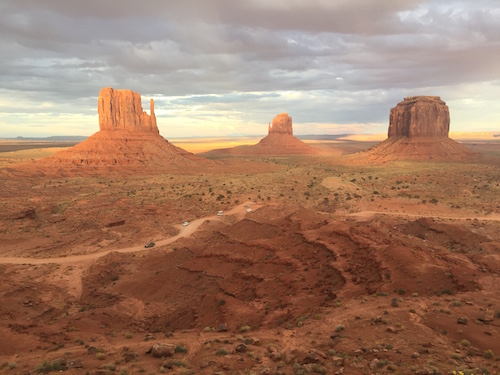 Food-wise, the Goundlings campground (6 miles away) has a decent produce section (apples, bananas, carrots, lettuce, tomatoes, potatoes, mushrooms, peppers, onions, garlic, even kabocha squash!) and a good variety of canned foods and dry box goods. It also has a freezer section with more frozen fruits and vegetable options AND Boca products! I thought the prices were reasonable, I paid $3.29 for a half gallon of refrigerated organic soy milk.

The only local restaurant (The View) has a small salad bar, but no vegan or easily adaptable options on the menu. Reviews online suggest they'll accommodate vegans (and other dietary restrictions) by request and with advance notice.

We did the Kaibab Trail to Cedar Ridge(South Rim) the first day, which I highly recommend for a short day hike. (It took us just under an hour, but it was pouring rain and very muddy, so we hiked slower than usual). 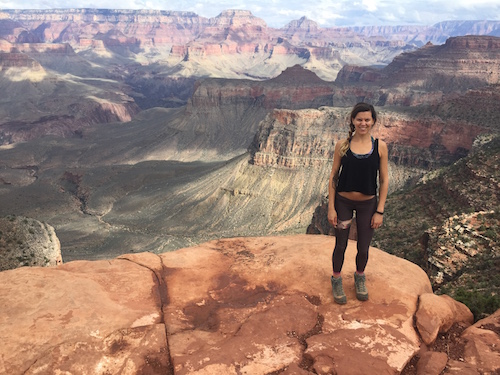 On the second day we did the Grandview Trail to Horseshoe Mesa(North Rim) which took 3 1/2 hours total (including a long stop for lunch).

Interestingly, we were MUCH faster on the return (which is UP!) on both trails. 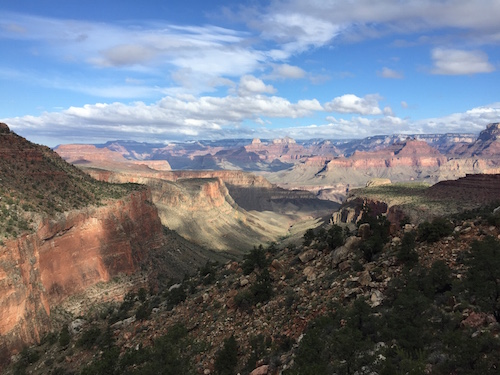 You would think going down would be faster but not so for us. With Kaibab, our return was half the time it took to go down and with Grandview, our return trip was 40 minutes shorter!

The general store has a large produce section and so many vegan options (from specialty vegan cookies to Amy's products and McDougall soups) I couldn't begin to list them all. It was like being in a mini Whole Foods Market! (They also had tons of speciality items for gluten-free and other allergies). The prices were slightly higher than at home (a That's It fruit bar was $2.09 vs. $1.99 at my local 711) but my-oh-my did it feel like Christmas!

The attached deli doesn't have a lot of options for vegans (a vegetable sandwich) but just across the parking lot is a Lodge with an attached restaurant with a few clearly defined vegan options (the menu indicates vegan, vegetarian, and gluten-free) and more choices that can be tweaked (like ordering a pizza without cheese). 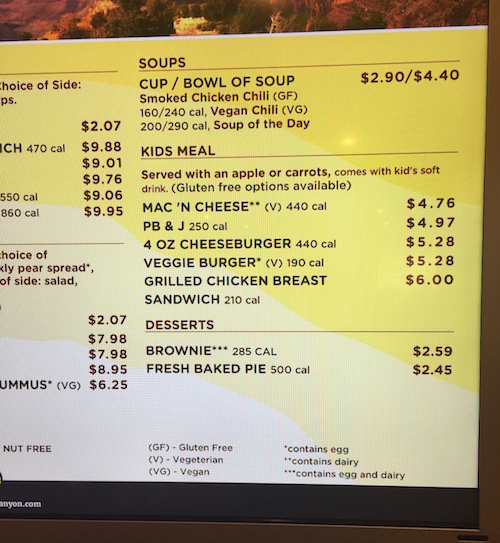 There's also a Tavern next door that has its own menu with different vegan and vegan-friendly options. The prices are also very reasonable, imho.

Since this was our second to last park, and we had some extra money leftover (gas was cheaper than we expected--score!) we treated ourselves to the sweet potato tacos ($5.25) 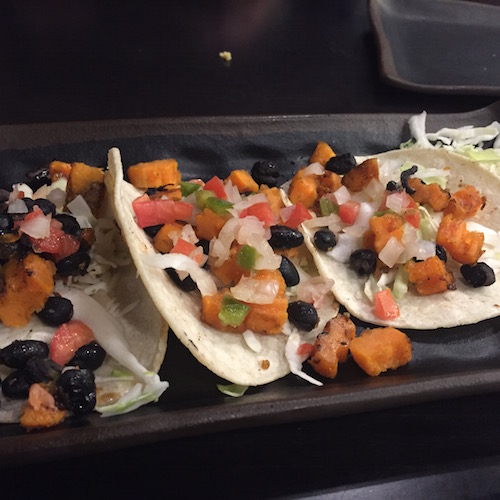 We didn't do a ton of hiking in Sedona. We mostly explored the short trails near our campground because we had other, bigger plans... 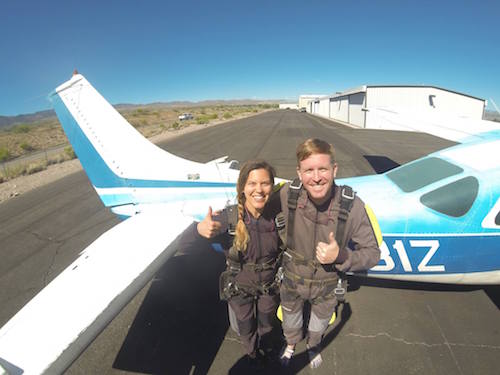 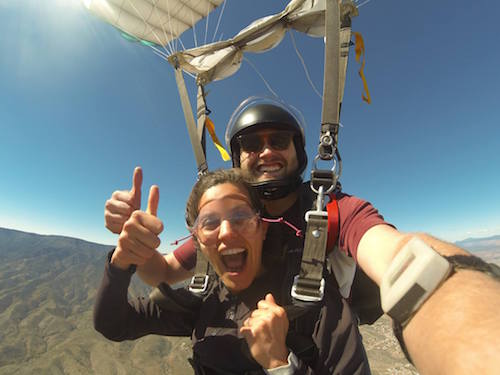 I still can't believe we jumped out of an airplane...

FACE YOUR FEARS (and all that)

Sedona also felt like a big, bustling city after all the places we'd been. It was a good "halfway point" back to la la land.

Our campsite was within walking distance of Tlaquepague Village, which has a few restaurants to choose from. I noticed the Secret Garden Cafe did have a few clearly marked vegan options (such as Tofu Scramble) on their menu, plus several vegetarian items that could be vegan without cheese. (They also indicate GF.)

And while it didn't specifically say "vegan", the menu descriptions for a few items at Rene sound vegan! (Their special Thanksgiving menu also had what appeared to be vegan options like "stuffed acorn squash with wild rice, dried cranberries and mushrooms"). It was really fancy and I'd have loved to go there.

El Rincon also didn't list anything vegan specifically, but like most Mexican restaurants, there are many workable options.

We did, however, pop into Oak Creek Brewery to watch the Baseball playoffs and while there wasn't anything vegan on the menu (save for a soft pretzel ordered without the cheese dip sauce), the bartender was chatty and told me everyone knows what vegan is in Sedona, and if I was hungry, no problem--the Chef could work something out for me. (But...youknow.. my budget!)

AND that wraps up all the trip food-logistical-hike stuff! I hope it's been helpful!

Stay tuned for my meal plan and cooking in the RV post up next!