Herbie of the Week: Shirley (She No Longer Has a Fatty Liver and is Off Her Cholesterol Meds & Insulin!) 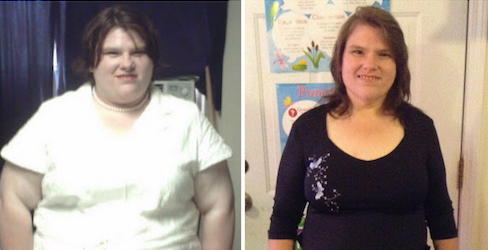 Meet our Herbie of the Week: Shirley!

"I went vegan two years ago and lost 60 lbs, backslid, gained 40. Went back to being vegan but more whole foods, less crap. From my highest weight 260 to now, I lost 93lbs."

As soon as I read that, I just HAD to have her as part of the Herbie of the Week series -- and I'm so glad she said yes!

Since leaving her comment, Shirley's lost even MORE weight, is off ALL of her medications for cholesterol, has reversed her T2 diabetes and feels wonderful!

I let Shirley take it away! 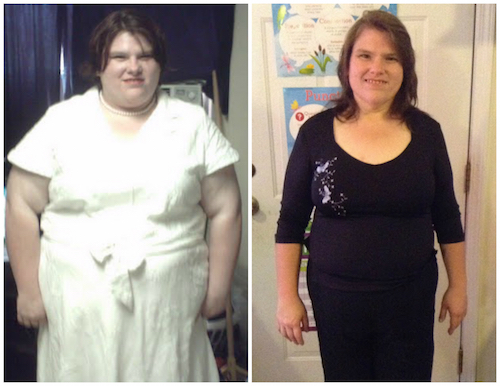 Some of my earliest memories are of being overweight. Strangers would approach me and say, "What a chubby baby! I bet she eats well!" My gram was diabetic. She used to chase me, closed cap, with her needles. To this day, needles terrify me.

I was 14 when I became a vegetarian through no choice of my own. I experienced anaphalaxis. We found that I was allergic to fish, shellfish, beef, egg white, and corn. At 14, changing your diet is hard. I had no choice because it all could kill me.

I went on my first weight loss diet at 18. I went from 220 lbs to 175 lbs. I was vegetarian when I met my husband who was not. That was my biggest weight gain. He always bought so much fast food.

I had three kids and with each, I had gestational diabetes that I controlled with diet. After having the kids, my highest weight hit at 260 lbs. I began complaining to my husband that I will have diabetes if we are getting all this junk food. I knew it was going to happen. I wanted to change it, but I knew if he wasn't on board, I would fail.

Two to three years ago, my nephew was dying. Brain cancer, terminal. I'm the type of person that I will research for solutions. I learned the types of foods that create cancers and illness. There was nothing I could do. My nephew passed on.

I became a vegan for my own health for the first time after watching "Forks Over Knives". I did well for a while. I went from 260 lbs to 220 lbs. I exercised, ate the right foods, started to feel healthy.

A few months after that, my husband was diagnosed with Non-Hodgkins Lymphoma. I was devastated, but knowing what I knew, I was determined. I forced my husband onto a vegan diet. Anything that creates high sugars was omitted and he took an aloe vera pill as well as B12. I was like a drill sergeant making him walk on the treadmill at least for 15 minutes after each meal.

The doctor told me nutrition doesn't matter. I was so incredibly infuriated with that statement. A month went by before he had his blood work. They said it was a false positive. The fact that he was well, they had no answers for. We both went off of the lifestyle at that point.

December 2014 I noticed yellowing in my skin. I knew that was a liver issue. I waited to see if it was in my head. I couldn't sleep at night. I would get up to use the bathroom. I felt horribly tired and as a homeschool mom, that's bad because I couldn't teach.

I went to the doctor's office, the first time in 7 years because moms tend to neglect themselves. I requested diabetes testing because even my great-grandma had it. When the results came, it took everything in me to keep it together. My A1C was 10.8% Meaning my blood sugar was well over 200 and normal is well below 120. I was diagnosed with fatty liver disease and "off the charts" high cholesterol. 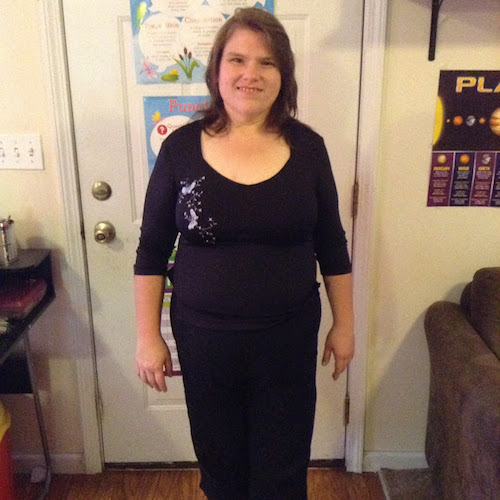 I was prescribed insulin needles and Metformin. I asked my doctor, "What if I change to a vegan diet?" She told me it was highly unlikely that I would get off of my meds. I was going to do it any way. I knew what I knew and I figure I knew more about food than most doctors.

I went home in tears. My children cried and my husband was scared enough that he stopped bringing in fast food and junk food which is all I asked of him. This was February 12th of this year. I could not, under any circumstance, inject myself with a needle. My husband took that job.

I did not feel well enough to exercise at that point. I understood diabetes Type 2 a fat toxicity. I knew the body fat had to go and diet was the first overhaul. I was told not to eat butternut squash soup because it was high glycemic, I didn't listen. I ate high carb, but the difference was the quality of the carbs. I cut back on my breads and omitted sugar, pop, chips, cakes any junk food I could think of. I lost 5 lbs the first week.

The next thing I had to wipe out was cholesterol and fatty liver. After researching more, I understood that meat has a whole lot of saturated fat. It had to go. I was allergic to a lot of animal stuff. I went in with a mindset that I did the most difficult thing ever as a kid. I cut out my favorite thing, fish. This won't be too bad.

Two months went by and I was off the needle. I began incorporating exercise, which I do three times a day to bring my sugar down. I still take Metformin one time a day. On my second visit in May my A1C was 5.8%, prediabetic. There are no signs of fatty liver disease and cholesterol meds were taken off the table.

This morning I weigh 167. I am at my lowest weight at my weight ever. My blood sugar is still dropping and has been in normal range for weeks. I have to drop it to 70 one last time to get off the Metformin.

I feel wonderful. I now sleep through the night. I no longer have foggy brain drain. I now play with my kids and I had no energy for that previously. When this portion of my journey is over, I intended on staying on this path. I try to be environmentally friendly and I understand the amount of waste created from my previous way of life. I wanted to be a vegan all along but without the diabetes, I couldn't get support.

I now see my family getting jealous over the meals that I eat. I think, eventually, it will have to creep in. They already eat my chili, taco salad, and bean burritos.

I am not going to say I'm perfect. I've messed up and each time and I start over. My children will not see me die of heart disease or any other diabetes related disease. It ends with me.

Thank you Shirley for sharing your story! You are such an inspiration!

I got off Metformin and now weigh 163.