Herbie of the Week: Alicia (After Beating Cancer, She Vowed to Get Healthy & Stay Cancer-Free with a Plant-Based Diet!) 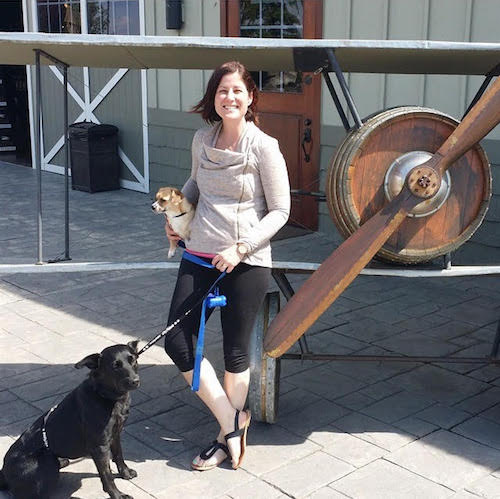 Meet our Herbie of the Week: Alicia!

At 28 years old, Alicia was diagnosed with with Hodgkins Lymphoma. Thankfully after 8 months of treatment, she came out cancer free -- but also 35lbs heavier from steroids.

Two years later, her doctor said at some point she would need a stent because the tumor crushed her arteries. Not wanting that to be her future, Alicia tried to get healthy, only to keep on gaining and losing the same 5lbs over and over again.

In 2012, Alicia stumbled upon "Forks Over Knives" and slowly but surely started to transition to a plant-based diet. Since fully committing to WFPB in December of 2014, Alicia's lost over 15lbs, has realized having fun doesn't have to revolve around food and drink, has more energy and is still cancer-free!

Here's Alicia's story in her own words!

In December 2006, at 28 years old, I was diagnosed with Hodgkins Lymphoma. I was in my prime. I had just come off an amazing year of horse back riding. I rode at the AQHA World Championship show just two weeks before my diagnosis. I went through 8 months of treatment including chemo and radiation and came out on the other side both cancer free and 35 lbs heavier from the steroids.

By 2008 I had lost most of the weight and was a stable 145. (See picture on Segway below) During one of my check ups my doctor said someday I would need a stent because my tumor had crushed some of my arteries. I didn't want that to be my future. I also realized that I was even more likely to get another form of cancer, so I started trying to get healthy. I worked out and thought I ate healthy, but never really lost any weight. I'd gain and lose 5 pounds over and over. 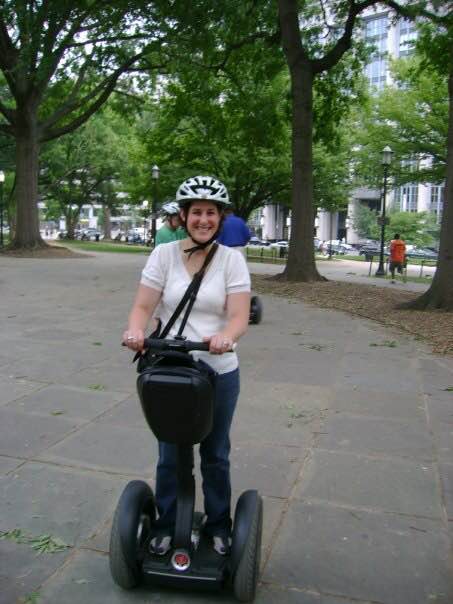 Fast forward to 2012. I watched "Forks Over Knives" one day when I was home sick with the flu. After that I watched "Engine 2 Diet" on Netflix. I found that really helpful in getting me started and gave me a great idea of what I was supposed to eat. From there I used both FOK and Engine 2 for recipes.

While I enjoyed both websites very much it was when I found the Happy Herbivore website that I was really able to start making progress towards 100% WFPB. A high school friend of mine is vegan (and was totally awesome and helpful in my transition) and shared a FB post of Lindsay's about 2 years ago. That's how I found the HH website and cookbooks. I found that I really liked Lindsay's recipes and that they were ingredients I could find in the store.

While making my way towards 100% plant-based, I met my now husband. He had also had a health scare. At his 30 year old check up, he was told to get his affairs in order. His liver enzymes were through the rough. Jon started eating lots of vegetables on his own and by the time he met me he was 30lbs lighter and his liver was returning to normal.

In July 2013 we moved to Seattle for a promotion at his Job and decided we should dive in to a WFPB diet. No one would know us as anything other than WFPB. I have to admit. It has been nice. No one really knows us any other way! We spent the first year eating plant-based at home, but since we travel so much and we were eating out often, we weren't very committed. In December 2014 we finally made the 100% commitment and haven't looked back.

I've been accused on more than one occasion, of forcing this lifestyle on Jon. I've been asked if he craves steak and if he goes to McDonald's when I travel out of town without him. The answer to that is no. However, we struggled the most when we weren't 100%. We often talked about being WFPB with others but then looked like hypocrites when we ate meat or dairy on a holiday or at a picnic. It's been a relief and even a bit freeing to be totally committed to this lifestyle. 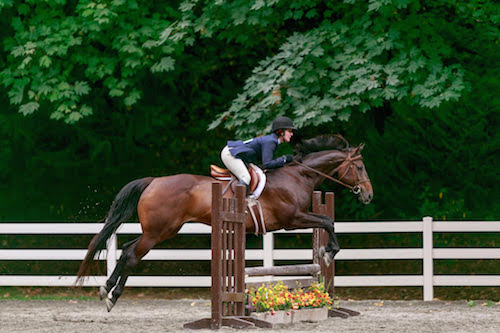 My husband misses cheese the most, but I miss soft serve ice cream. Luckily, I've become an artist in the kitchen with a frozen banana, "milk", and my ninja food processor, so I get my "fix" when I need it. My favorite is chocolate with chocolate chips and PB2 with a little extra water in it for a topping. We also travel quite a bit for work and for fun, and while there's definitely been a learning curve, it does get easier! On a recent vacation to the San Juan Islands I got really upset that I wasn't fun anymore. We couldn't go bar hopping (like I was used to -- it was vacation!) and I had brought food, so we didn't need to eat out. After some sulking, my awesome husband took me to watch harbor seals at sunset, instead of out to eat. He showed me that fun doesn't have to always be about food and drink.

The benefits of the WFPB lifestyle far outweigh any cons. We sleep great. I've lost almost 15lbs and Jon's lost another 25 lbs. We have energy to burn and easily conquer our hikes, snowshoes or horse back riding. I've been a yogi for almost 10 years and Jon has recently gotten into it too. We also chase around our rescue and foster dogs at home.

The meal plans really made my life even more simple. I batch cook and all the meals are planned! Now, I don't have to worry about what I'm going to make for dinner before I go ride my horse after work. I've even added 15 minutes of yoga practice to my day during the time I used to cook.

Thanks Alicia for sharing your inspiring story with us!

We recently hiked at Glacier National Park for a week. We brought our own hot pot (think college Ramen maker) and purchased some potatoes, rice, bean and oatmeal when we left the airport. We ate at so well while we were there and had so much fun. By making our own food in our hotel room we were able to sit outside and enjoy the gorgeous scenery while others were out looking for a restaurant. Plus we saved money. I've attached two pictures from the trip. One of me and one of me and the hubs.

Weight wise we've lost about 80lbs collectively, since going WFPB. I currently weigh 119lbs and Jon weighs 165. We love how we look and feel. 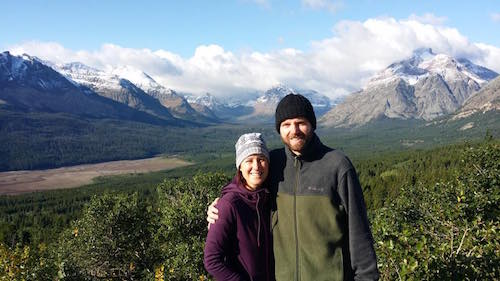