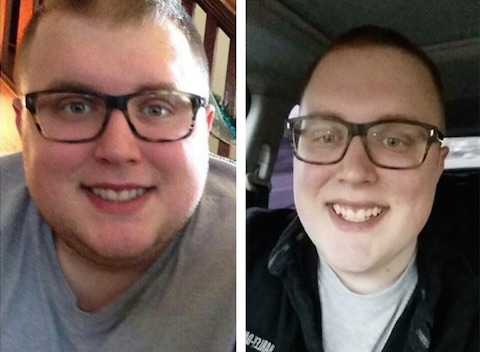 Meet our Herbie of the Week: Brent!

Brent was nominated by his mom, Kelita. In an email, she told me how her son was suffering from migraines, digestive issues and high blood pressure -- all at the age of 22!

After gaining back the weight he lost on a high protein, low carb diet, Kelita challenged Brent to go plant-based for a month just to see how he felt.

Within a month of accepting his mom's challenge, Brent started to notice some changes: he lost 10lbs, his migraines decreased, and his digestive issues started to clear up.

Now, more than 6 months after fully committing to a plant-based diet, Brent's 33lbs lighter, his migraines and IBS are a thing of the past AND the asthma and severe allergies he had last year are gone!

Here's Brent's story in his own words. 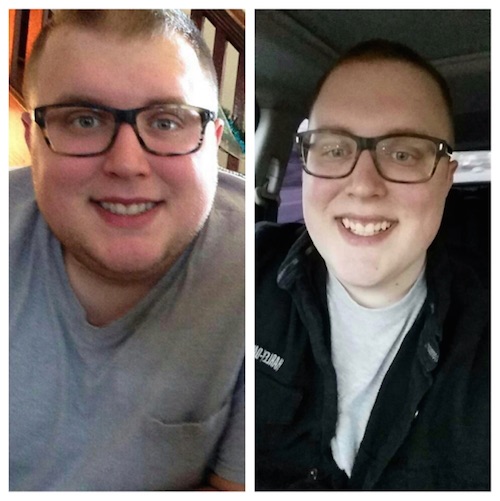 I am a “newbie”. I have only been living the plant-based lifestyle since November of 2014. I chose to go plant-based because of many different health concerns I had for myself.

I had struggled with weight for what seemed to be my entire young life. I was overweight in middle school, high school, and for the beginning of my college career. Throughout high school, I would do well on weight loss programs and then I would gain the weight back. When I got to my end of my freshman year of college (2011), I finally said “enough is enough” and I started a specific workout regimen of 1.5-2 hours in the gym, 5-6 days a week. I would also have long cardio sessions in my apartment on my stairmaster, normally 45 minutes to an hour for each session.

My diet was the typical low-carb, high protein diet consisting of 11 egg whites and oats for breakfast, and several meals throughout the day made up of chicken, beef, and tilapia. I would allow myself roughly 4-6oz of brown rice with each meal. To finish the day off, I would drink a casein protein shake before bed. Once a week, I would allow myself a “cheat meal” which normally consisted of pizza or buffalo wings. I had little to NO fruits or vegetables on this program. I stuck to this diet religiously and lost 75 pounds in 8 months. Because of my new found success and passion for diet and exercise, I changed my major to Exercise Science and wanted to learn as much as possible about the body and how it works. All is good in the neighborhood, right? Wrong.

Although I “looked good”, I felt terrible! I developed chronic migraines that I suffered from almost weekly, sometimes three or four in one week! I had to take strong prescription drugs for the migraines and they often made me feel tired and groggy. Because of all the protein, fat, and limited fiber in my diet, I developed IBS and had severe stomach pain almost every morning. Even though I had all of these symptoms and conditions, I still believed what I was doing was the “healthy” way to diet. I had bought in to the mainstream ideas of “low-carb is healthy” and “you need high protein to be fit”. It was all so overwhelming and led to future struggles mentally, some I still find myself battling today.

During the Fall of 2012, I came across "Forks Over Knives" on Netflix. I found its message to be life changing so I shared it with family and friends to hear their thoughts. When I sent it to my mother, she was sold almost instantly. She started a predominantly plant-based diet that week and hasn’t looked back since. She even completed the plant-based nutrition program offered by Dr. Colin Campbell and Cornell University in 2013. I wasn’t so quick to climb aboard the plant-based train. I was still going through some personal issues at a young age and I would often turn to food to comfort me. 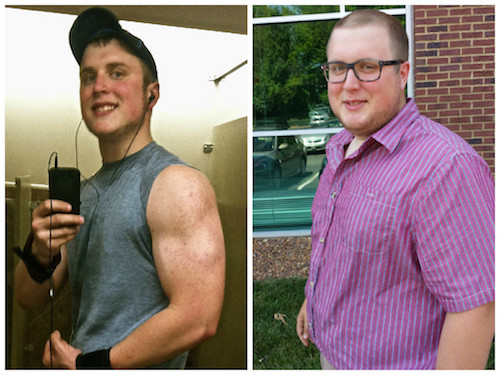 Left: After I lost 75 lbs. with a low carb/high protein diet and rigorous exercise regimen. Right: After I fell off the wagon and gained 120 lbs back!

I know you’re wondering, “If you were so adamant about your high protein, carnivorous diet, why are you plant-based now?” Good question. I fell off the high-protein wagon, and hit the ground HARD. Some personal struggles and stress led to my weight gain and in about 2.5 short years I gained over 120 pounds! Eventually, I was tipping the scales at nearly 300 pounds as a 22 year-old. Keep in mind that I had graduated with my bachelor’s degree in Exercise Science during this time. I was embarrassed and felt like a slob. I felt like a hypocrite; studying exercise and yet allowing myself to get to 300 pounds.

By November of 2014, I weighed 312 pounds and was miserable. I would often talk to friends and family about my weight and where I wanted to be, often thinking back on my past “success”. One day, my mother challenged me to try a plant-based diet for one month, just to see how I felt. She recommended I look at the Happy Herbivore website and the meal plans. So from roughly Thanksgiving to Christmas, I ate a plant-based diet. I wasn’t as strict as I should have been (I still allowed that darn weekly cheat). But…I felt SO MUCH BETTER. My headaches were coming less frequently and my digestive issues began to clear up. My moods improved and I started having a more positive outlook on life! And the best part was -- I was eating as much as I wanted! I was hooked.

In that short month I lost roughly 10 pounds, even with the weekly “cheat meal”. I thought to myself, “If I can lose 10 pounds and feel this good while still allowing a cheat meal once a week, I wonder how I would feel if I followed the plant-based diet more strictly and made it a lifestyle?” I began doing research. I read several books, such as "The Starch Solution" by Dr. John McDougall and "The Engine 2 Diet" by Rip Esselstyn. I also watched a few more documentaries such as "Food Matters", "Earthlings", and "Vegucated". 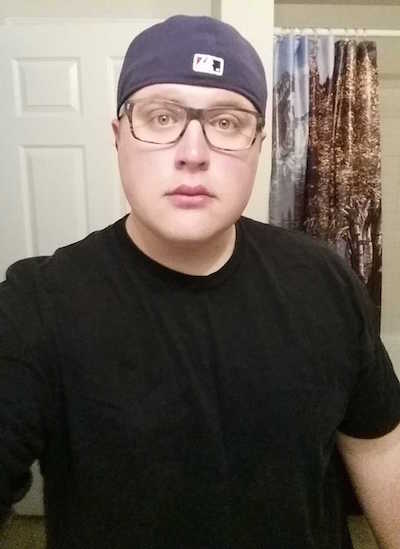 Since making this plant-based diet a lifestyle, I have come such a long way! I have lost a total of 33 pounds since taking that next step and eliminating all animal products from my diet, even the blasted “cheat meals”! I no longer have headaches and have no digestive issues whatsoever. And the most important thing to me is that I feel great! I tell people all of the time that I honestly can’t remember the last time I’ve had a bad day! This way of life is the best way to live, not only for you, but for the animals and the planet as well! Do I miss pizza, wings, and other animal foods? Sometimes. But I love my newly found health and positive outlook on life more than I love the foods that used to CONSUME my life.

The best part about this for me is that I still have a long ways to go. I am still overweight, and that is perfectly fine by me. I love myself and I know that the choices I am making every day with diet and exercise are going to pay off eventually, so I’m just going to enjoy the ride!

Thank you so much for sharing your plant-based journey with us!