A Vegan Taste of San Francisco 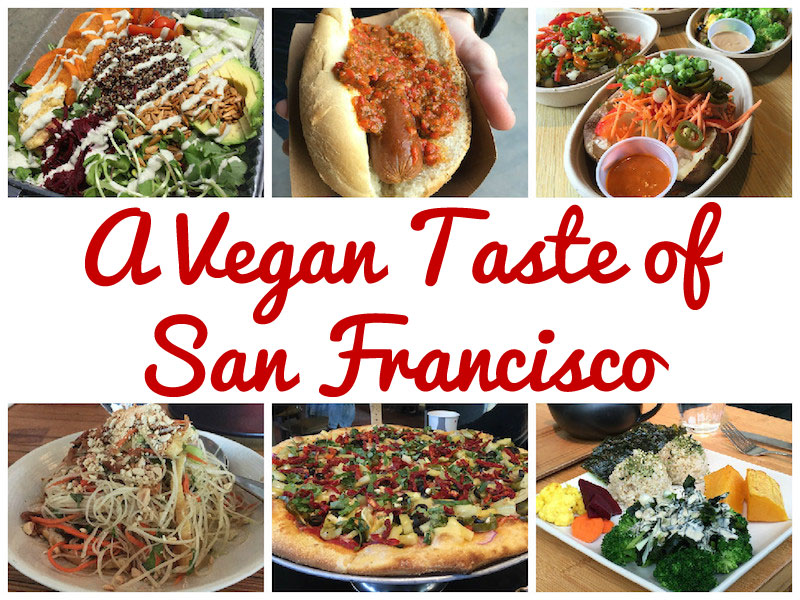 Last week Happy Herbivore HQ went to San Francisco for a corporate retreat. (BIG thanks to all the Herbies who suggested POIs!)

Funny thing, when we arrived, I'd planned for us to eat at our hotel. (Having browsed their menu online, I was seduced by a "vegan ratatouille")

Love is indeed blind because I missed the part where it said "LUNCH menu" and that they were not open for dinner.

Fortunately, a quick search on Yelp led us to The Slanted Door in the Ferry Building Marketplace.

TSD was JAMMIN' on a Monday night (so if you decide to go, reservations are a must!) and we were about to give up and eat bread and coffee (there is a Blue Bottle and ACME Bread Co. in the Market Building---and really, we wouldn't have been sad about that!!!) when the host said, "Actually I just had a cancellation.. Table for 4?" YESSS

Here's the Vietnamese Papaya Salad, which they prepared vegan and oil-free at my request. I'm a huge (HUGE) fan of Thai Papaya Salads and while this one also has green papaya and peanuts, it is quite distinct from it's Thai cousin and absolutely delicious... 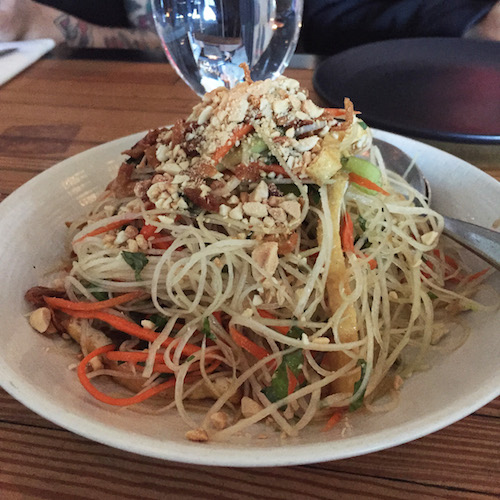 We also ordered several of their vegetables plates and shared them with rice.

FYI you have to order the dishes "vegan" because they're not usually, even though it only lists vegetables on the menu. (We appreciate the staff letting us know this).

My team and I thought everything was overly oily for "steamed" but I do remember food being really oily when I was in Vietnam so maybe it was just really authentic ;) 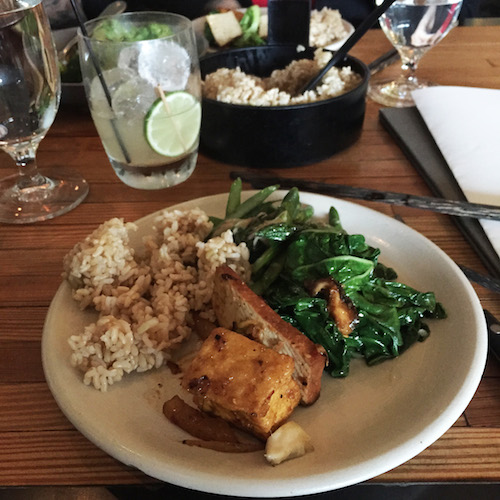 Before I get to the next spot, I need to first convey how much we love potatoes at HH HQ. In fact, we probably consume north of 20lbs of potatoes a week!

If you ask Jamee and Carly what in their life changed since coming to work for me, both would tell you that they now eat a lot of potatoes ;)

Point is, when Carly found Hot Spud, a restaurant dedicated to potatoes, we went a little crazy.

A note about this place: the website says the potatoes come prepared with butter and cheese, but we had no problem ordering them "naked". They also had a menu at the register that showed you allergen information for all their menu items, including sauces AND the staff was very helpful and knowledgeable in letting us know what was vegan and oil-free (as well as soy-free, nut-free, corn-free, and gluten-free to appease other allergies in the group). 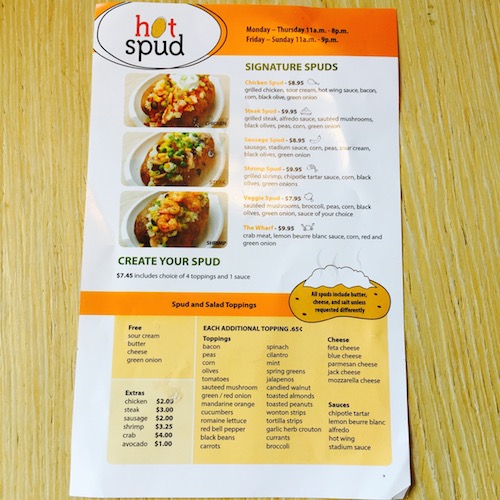 Customized to each person's perfection: 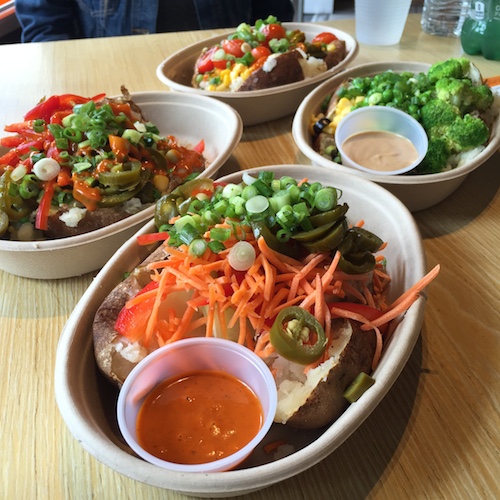 Before we left LA, I told Carly and Jamee about my first trip to SF, where I ate at Lucky Creation Vegetarian Restaurant in Chinatown. I loved it because 1) I had the opportunity to try truly authentic food, 2) Since it was entirely vegan, I could order whatever I wanted, including things I couldn't pronounce, because there was no fear I might accidentally order fish eyeballs, and 3) let me reiterate #2, which came in extra handy when some food came out and I had no earthly idea what it was ;)

Carly and Jamee decided they too wanted to be adventurous, so we stopped one afternoon for a quick bite.

Regrettably it was really cold, damp, rainy, cloudy and all out miserable that day, so instead of ordering some of the more... peregrine... dishes, we ordered soups. 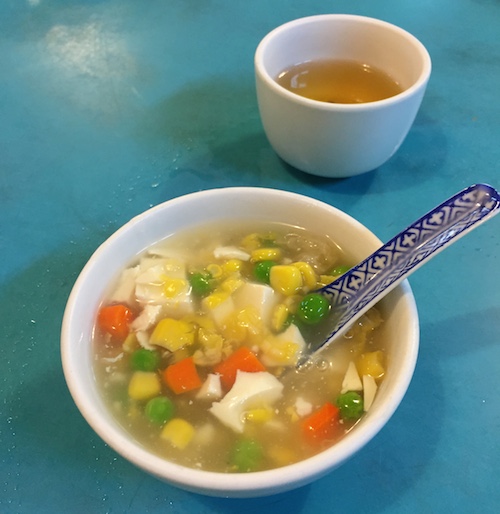 This soup reminded me so much of the soup I had (and LOVED) at a Buddhist Temple in Hong Kong last fall. 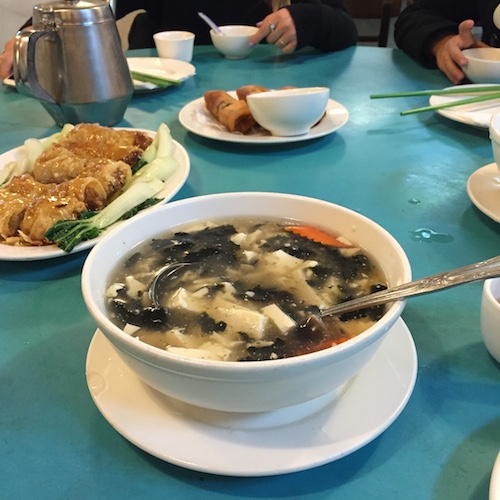 I ordered this soup specifically because it said "black forest moss" in the title (which I guess is some kind of seaweed). It's shocking how much I've come to love seaweed since adopting a plant-based diet almost 10 yrs ago! 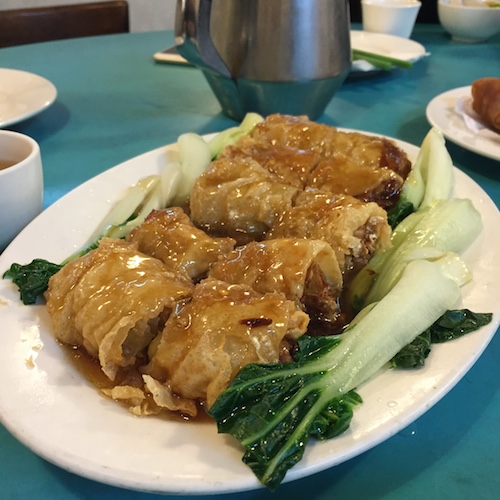 Some kind of tofu skins that Scott ordered :)

We also went to a baseball game at AT&T park and ate at The Garden. 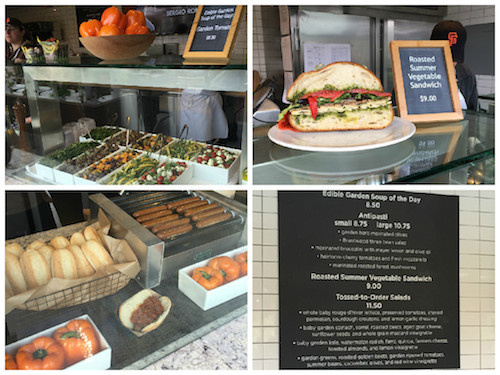 Can you believe they literally grow vegetables and herbs IN the ballpark? They also have a number of salads and a veggie sandwich.

There isn't a salad bar and you can't customize very much--mostly just subtract from their predesigned menu, but that did allow me to get a vegan and oil-free salad :) 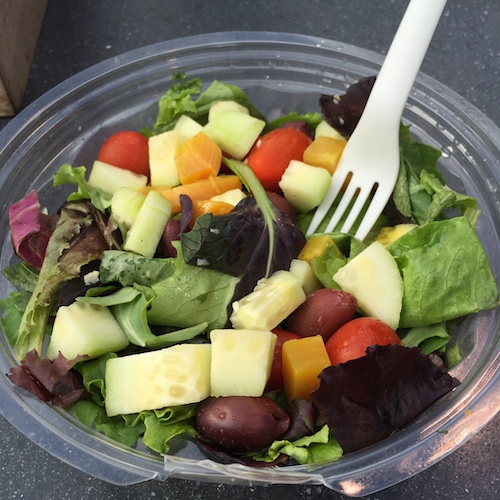 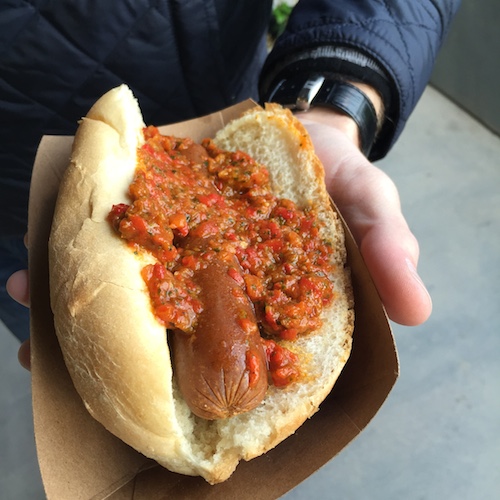 And then "plain" at all the concession stands where you can add whatever condiments you liked. (I shared this one, it appeared to just be steamed).

Scott's been to 4 or 5 baseball stadiums this year and says the Dodgers have the best vegan hot dogs (and he's not being biased because we live in LA. He's a Red Sox fan AND thinks their veggie dogs are the worst). It seems like everyone (except the Dodgers) uses Field Roast frankfurters, which are inferior, in our opinion... but beggars can't be choosers. I'm glad there are vegan hot dogs period! 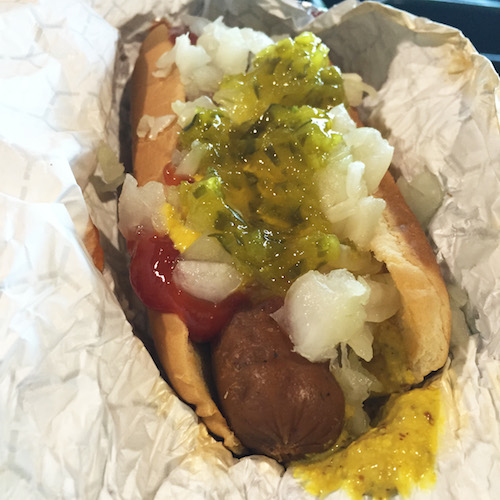 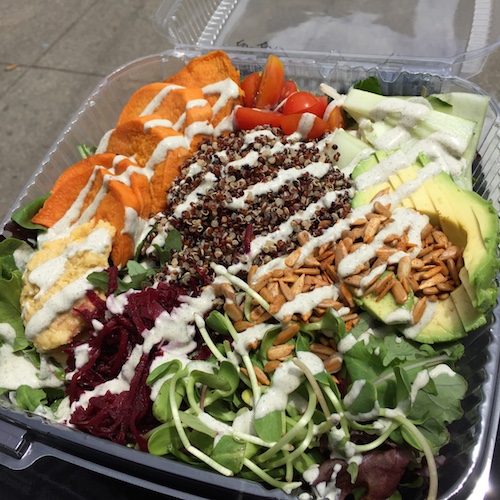 My favorite spot on the trip was Nourish Cafe which definitely lived up to its namesake with this salad! Complete with their signature oil-free dressing! I was so impressed with all their plant perfect offerings!

They even had healthier, more wholesome takes on popular sandwiches, like the Bahn Mi and as they call it, "Yam & Cheese" sandwich 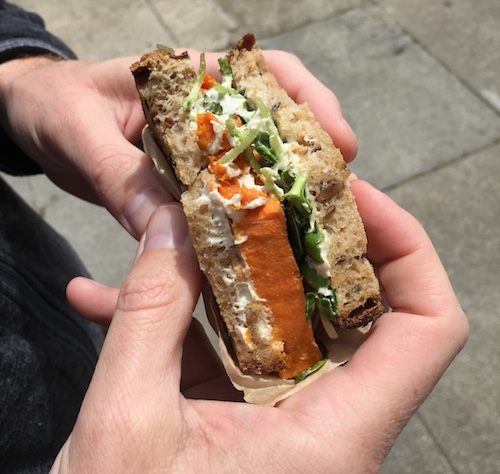 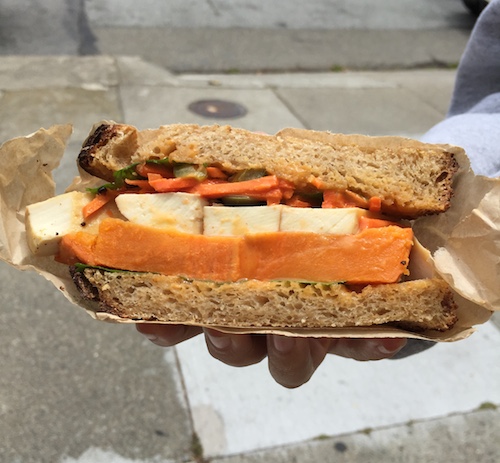 I also found these two delights in the baked goods section, both made without oil. I swear, in all my life, I have never seen oil-free vegan desserts EXCEPT in my own kitchen. We shared these for dessert.

We all felt the chocolate covered waffle didn't really taste or feel like a waffle, but it was still fun to eat chocolate ;) I was the only one who liked the cupcake but I pretty much live and die for anything resembling banana bread. 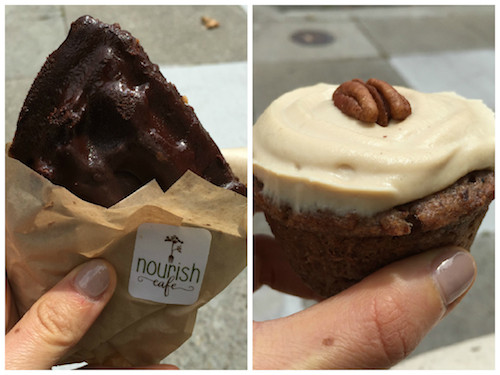 For "excursions" we went to Alcatraz 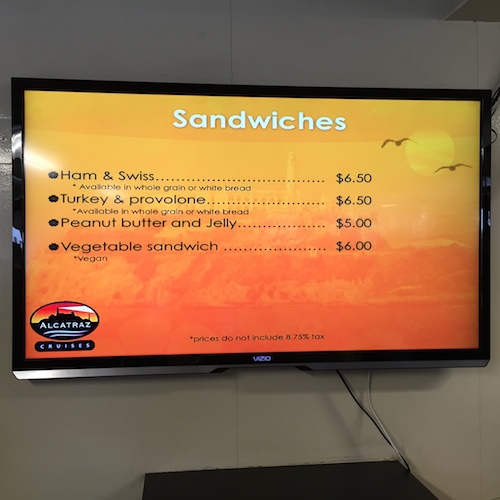 BTW, huge props, they have a vegan (clearly marked vegan) sandwich for sale plus a ton of different fruits -- and it's reasonably priced! 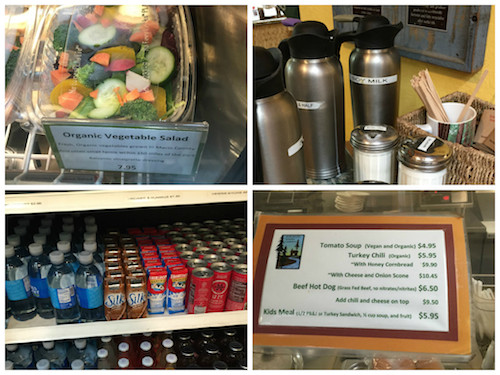 Their cafe also had several vegan options -- two soups, a sandwich, hummus plate, cookies and other pastries --- and soy milk for coffee!

Lastly, we spent our last night splurging at Herbivore which I'm sad to say, none of us really enjoyed or thought it was particularly memorable or worth the excursion... bummer.

Here are some of our dishes... nachos, which tasted good, but it was like soup -- the cheese was literally soup... tasty for sure, but not how we think of nachos. 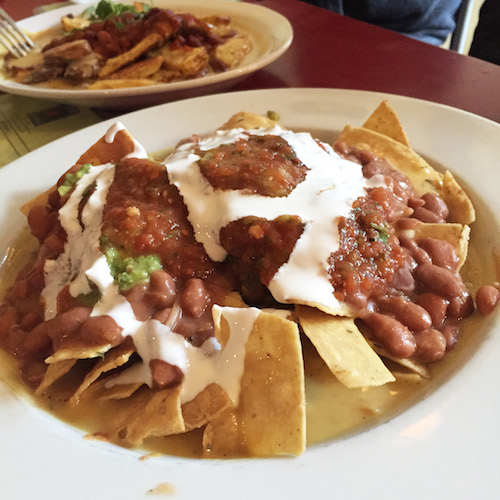 Chili cheese fries (which missed the mark hard) --- we were so sad. 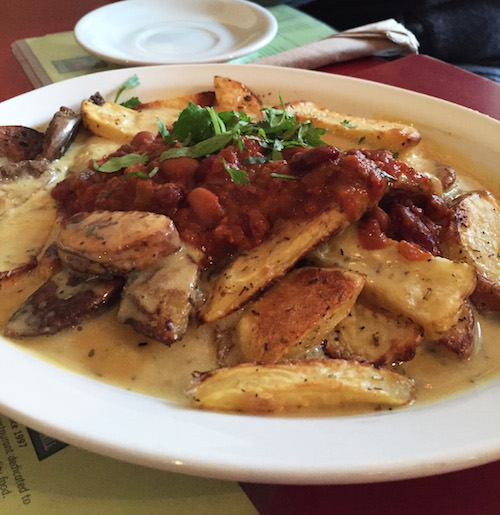 Lentil loaf with steamed kale and mashed potatoes. The gravy was great but the rest was just okay. The beet sauce (that's under the loaf) was probably the best part. 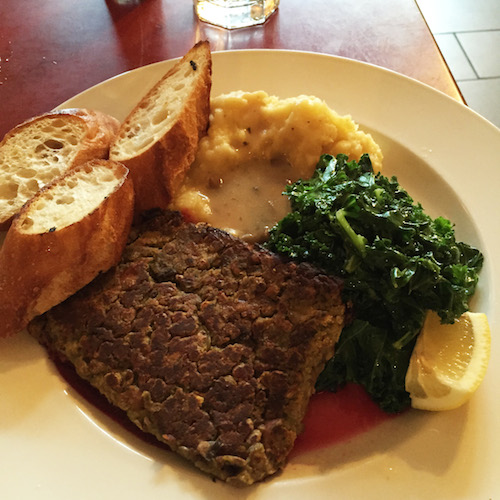 A friend that was dining with us ordered fajitas -- I didn't take a picture of his plate, but we were all pretty disappointed that it was basically fried onions, peppers, and fake chicken strips with store-bought tortillas.

I only wish Millenium had not closed!

Finally, we tried a number of different teas in SF (I also had matcha for the first time and now LOVE it!)

First at the Japanese Tea Garden... 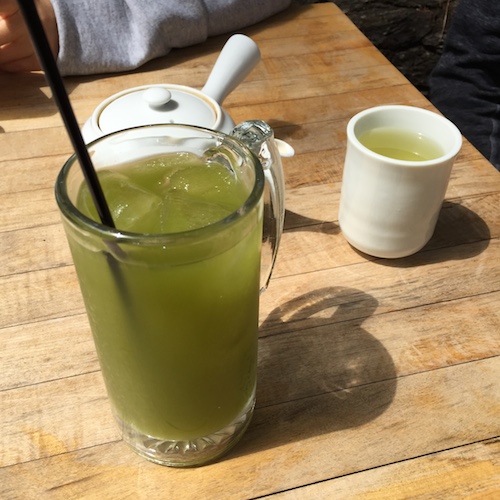 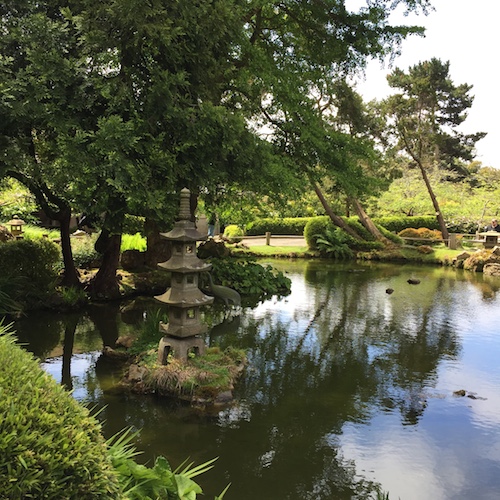 The Tea Garden also neighbors the Science museum which had tons (tons!!!) of vegan and plant perfect options for sale.

My second favorite place was Samovar Tea Lounge. This place is off-the-hook amazing, you must must must go. This is the Japanese tea + food pairing plate... vegan and amazing! 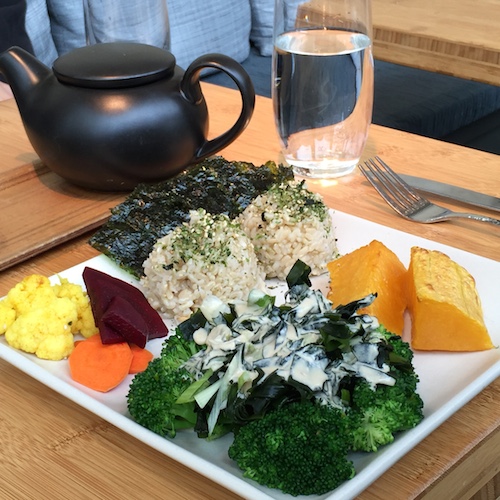 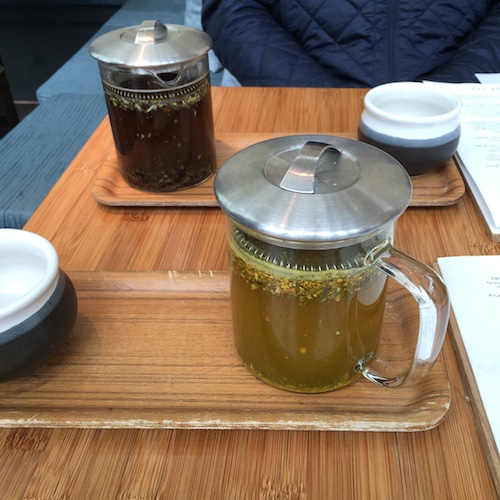 Why yes I'll have the almond milk matcha shake to go since its vegan :) 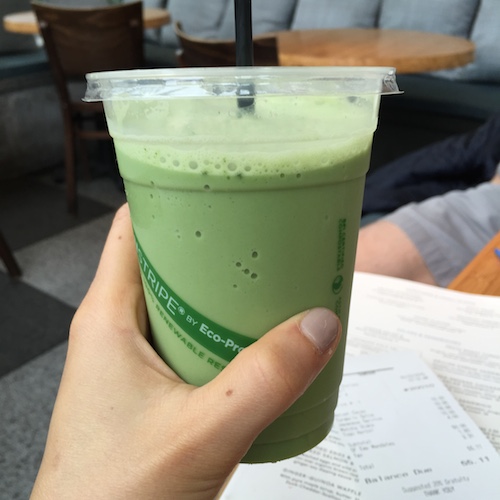 and finally, what vegan vacation would be complete without the requisite cheeseless pizza??

I saw Pizza Orgasmica on one of my walks and sent a picture to my team, making some quasi-inappropriate comment about the name...

...but all that did was make everyone hungry for pizza.

It was also positively dreadful outside: overcast, cold, wet, foggy... and since this place was maybe 20 steps away from where team HH had been working...

THE NAME WAS APPROPRIATE. 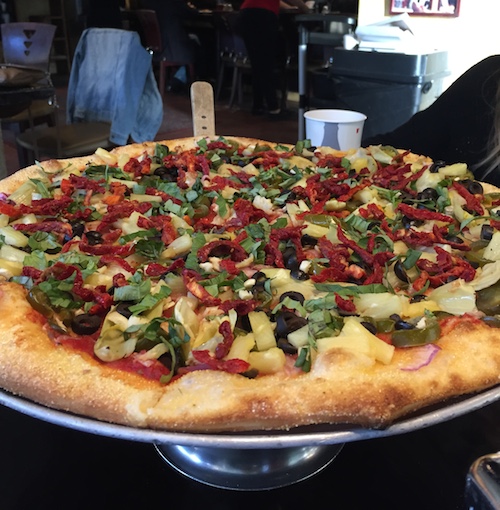