Herbie of the Week: Madi (11 Years Old & Leading the Charge for Plant-Based Changes at School!) 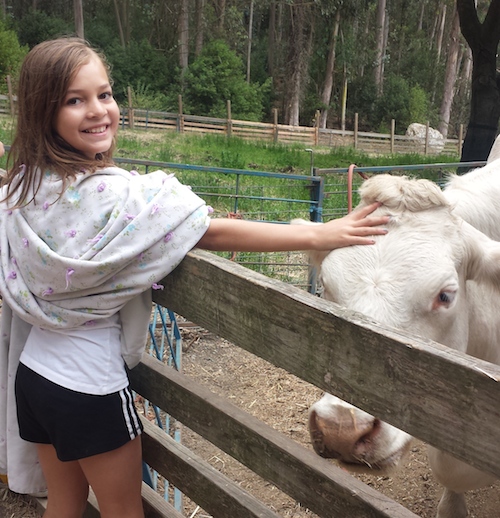 Meet our Herbie of the Week: Madi!

At only 11 years old, Madi is already making a difference and spreading the word about the many benefits of a plant-based diet!

"My daughter started a boycott of milk at school today. She is in 5th grade and her best friend went plant-based last year after asking my daughter questions about why we eat like we do. Her mom is amazing and has let her and makes their dinners separated so she can eat plant based. Anyhow, my daughter now has 15 kids eating this way at school. Some kids say they are just school vegans. They are taking their request to no longer serve milk to the office tomorrow so they can ask to pass out flyers and educate students who don't have their recess time. We talked to her about it and then asked her about what you do when you are turned down. She told us that she would just tell them she will be back and then do more research and keep fighting even if she never gets permission so that one day she will have enough research to fight for all schools to change their menus.She told me milk is only a small part of the big picture but that she wanted to start them with something easier for them to walk away from.So proud of her...and nervous for her."

As soon as I read Nikki's post, I just knew I had to talk to Madi so I could share her amazing story!

Get ready to be inspired!

HH: Hi Madi! Tell us a little about yourself!

I am 11 years old and I've been a Herbie for just over a year.

HH: What is your favorite part about being a Herbie?

That I can eat without having to take another living thing's life and I have felt happier ever since my family stopped eating animal products. I feel a better connection with nature because I am not killing it, I am living with it. Well, pretty much everything about being an Herbie.

HH: I heard some of your friends have started eating plant-based as well. Why did they make the switch?

I explained to them about being an Herbie and how you can live without killing another living thing. I explained what they do to the animals in factories and most of my friends have become vegetarian but my best friend has become an Herbie too and her parents support us both too.

HH: You recently boycotted milk at your school. What inspired you to do that?

No one really needs milk in their systems especially kids at our age. My best friends Sam and Maggie were sitting with me at recess one day and I was doing my usual thing explaining about how I eat and why I don’t want to harm animals and we all got to thinking. The poor treatment of animals has to stop so we were thinking about what we could do at our age. That is when we decided to start small by stopping the drinking of milk at our schools because kids would probably handle that better than just turning the whole school vegan right away. Plus the schools get their milk from factories that have horrible ways of doing things.

Another reason we did it was that some people in our school are lactose intolerant, vegan, or don’t drink milk and they don’t offer any plant-based milk options and that also helped make me want to do this. People keep telling me that it is too expensive to get better milk choices and so I think they should just banish milk in schools. If you can’t get “healthy” milk then why get milk at all?

I really wanted for our school to not serve milk at all, but realized that I have to start small and get people warmed up to the idea of making better choices. So I pushed for them to add a plant-based option to the menu. When kids found out about what I was doing I showed them articles that I found and lots of kids starting helping me once they saw the condition of milk cows and how they can have a percentage of blood and puss get into the milk, like it’s not against the law to let that get into what people drink. 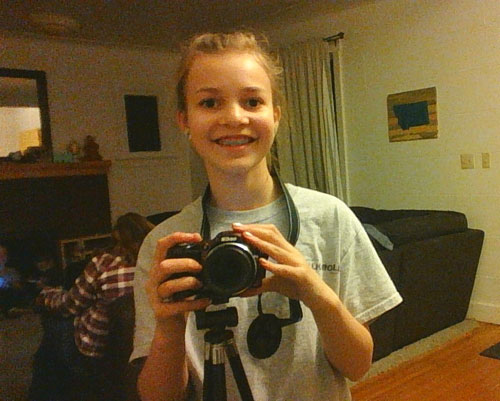 HH: How did you go about it?

I went home and researched a lot about milk cows. Like that milk cows live for only about 5 years instead of 20 or more and other things that would surprise and shock other kids who love animals. I found pictures of pigs and cows with dogs and cats and quotes about how we don’t harm our pets so why do we harm farm animals? When I took those to the playground it really got kids thinking, we even got little 3rd graders to get involved from those pictures because they don’t understand the diseases and words if I would have read articles to them. I asked kids if they liked pets, and then asked them about what they would be willing to do to their pets, things that factories do to the cows. Then they would say “no” of course and I would ask why is it ok for factories to do it to cows then? That helped my campaign a lot.

Speaking of the campaign, you would think that it was just girls who cared about animals because they aren’t playing basketball and hunting and stuff, but that was not the case. Boys stopped their sports and helped us start to collect signatures and became part of the campaign. Pretty much the whole basketball court was empty. Soon people started to recognize me as the person who was doing the cow thing. We got 178 signatures from 3rd, 4th, and 5th graders along with some moms, our janitor and one lunch lady.

HH: That's incredible! What happened next?

Our principal found out and she set up a phone conference with the milk company we get school milk from. So I was called into the principal's office with my two friends for an interview. In the phone conference the TruMoo lady told us that their cows were happy cows thinking we were dumb and didn’t know what we were doing or why we were doing it. She invited us to visit one of the factories if we wanted. I declined. I told her one of our issues was that like all mammals, in order for something to make milk it has to be pregnant or think it is pregnant/nursing. So in order for milk to be made the cow has to be impregnated or given hormones, most likely hormones. Doing this it shortens the life of the cow. I asked if they are impregnated how long do they get to be with their babies before they are taken away, she had no idea so I went home and looked it up. The answer was only a few hours before boys would be shipped off to be killed and the girls would be raised to be milk cows too. She told me that she didn’t really think about it that way and she would get in contact with people in her company about the way they do things. So then we ended up getting a letter from TruMoo explaining they don’t use hormones and that their cows are happy. The beginning of the letter said “Thank you for choosing TruMoo” which was funny since we were protesting them. It made me feel like this letter was just sitting in their computer and they sent it off with a few added words for us.

A few weeks later we got sent to the conference room for lunch time where we got interviewed by a mom who is a journalist. She heard about what we were doing at school and wanted to get an interview with us and try to get it published. She brought up a question that made me think, the question was “How do you feel about knowing all this information about what they are doing to the cows?” I said: “It’s depressing knowing what they do to cows but at the same time it is what motivates me to stop it. By stopping it with schools first it might make the community realize changes we should make. One step at a time.”

I enjoyed talking to her because she supported us and wanted us to understand how important what we were doing was. That it is something big. I didn’t really think about it like that because I was just doing what I felt was right. Now thinking about it I realize that what I am doing is bigger than just one campaign, bigger than just helping the cows, its about helping the ecosystem, helping the world. Helping the world to make better choices about what they eat and how they treat what they eat. 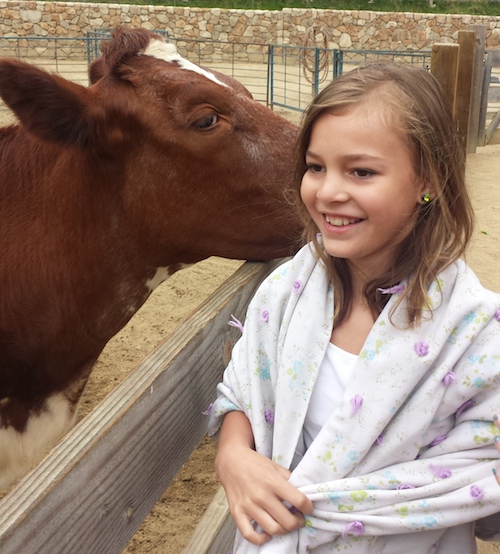 HH: Have you seen changes happening at your school since starting your campaign?

When we did our Ice Cream social at the beginning of last school year we called and asked if there would be non-dairy options. The school told us that there were no plans for that. So my mom bought us ice cream bars and brought them to the school party later that day. When we showed up they had a separate ice chest of all fruit popsicles for people who didn’t eat dairy. If we hadn’t asked about it, those popsicles wouldn’t have been there. I think starting this campaign has helped people who eat different feel more comfortable. At the sock hop at the end of the year we even had people make plant based cupcakes for the cake walk. It makes me feel awesome to see things options because I know without this campaign things like this would not be happening.

HH: What do you hope other plant-based kids to learn from this?

Thank you Madi (and Nikki) for sharing your story with us! You are such an inspiration to all Herbies!