Herbie of the Week: Alisha! (She Committed to a Plant-Based Diet After Pregnancy & Lost 60lbs!) 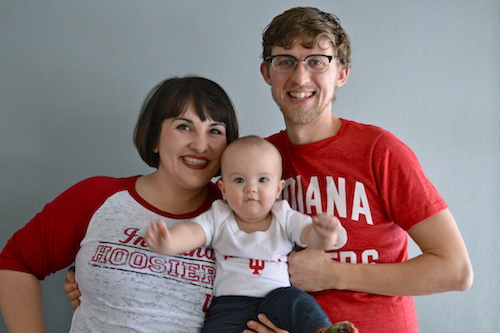 Meet our Herbie of the Week: Alisha!

I first "met" Alisha back in September when she asked for advice when her weight-loss stalled while breastfeeding. Three months later this email popped up in my inbox:

"Thanks to your helpful feedback and some support from the meal plans, I have lost about 40lbs since September and am almost 15lbs under my pre-baby weight. I feel great and everyone is wondering how I did it -- I tell them it's all diet, thanks to your system! I am feeling pretty confident going into the holidays as well."

I was SO excited for Alisha and I knew her story could help other new mamas out there -- which is why I asked her to be part of the Herbie of the Week series!

I hope you find her story as inspiring as I did!

I have been on and off the plant-based wagon for a few years. I originally did it for self-identified health reasons (i.e. I felt better when eating plant-based, my athletic performance improved), but I would go back and forth between being plant-based and not. I have been a vegetarian for about 10 years and have been about 80%-100% plant-based for the past 3 years or so. My commitment to being plant-based was enhanced when I found out I was pregnant in late fall of 2013, and was further strengthened over the summer of 2014 when I experienced some complications late in my pregnancy and was trying to drop the baby weight. I always believed in the power of plants, but after an exchange I had with Lindsay in early September that made me think about cutting oil/fat out completely, I am more of a believer now than ever.

I had some health problems at the end of my pregnancy and a long, challenging labor. I was not 100% plant-based at the end of my pregnancy and during the weeks of recovery following my labor as I would have the occasional serving of eggs here and there. I felt it. I could tell a difference. I was not feeling comfortable in my own skin. I believe in being body positive and loving oneself at any size, but I just did not feel like myself. Around the time my baby was 6 weeks old, I had a little bit of a wake up call when I went in to the doctor and I was not losing the pregnancy weight at the rate I should have been and she was concerned about the implications that might have for my health down the road and how it might impact my ability to get pregnant again if I chose to. She suggested that I add a lot of protein to my diet (i.e. greek yogurt, eggs, etc). I was not keen on that. I did some thinking and realized that, as an exhausted new mom, the answer was not to work harder at getting back to a healthy weight, but to work smarter. I also decided to give myself a few weeks of an earnest, complete commitment to the whole food, plant-based, no oil lifestyle. If that didn't work, I would explore other options. 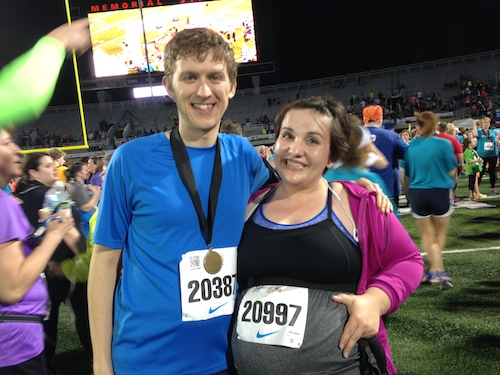 I started creating an environment in my home that enabled me to work on getting the baby weight off without having to work hard or think too much about it. Previously, I was skeptical of how much impact a diet can have on one's ability to lose weight if they were already exercising regularly. My husband and I were so active -- we ran half marathons and biked a lot during the warmer months and practiced yoga together -- I didn't think I needed to be too mindful of my diet. But at 6 weeks postpartum I was not in a position to do 60 mins of cardio 5 times per week. I could barely walk a mile without it wearing me out! I had to look carefully at my choices and pay attention to what was going into my body. I tried reaching for a banana or microwaving a potato instead of having crackers with peanut butter for a snack. It worked immediately. Within 14 days, I was down almost 15 lbs after being in a holding pattern for a few weeks. The weight just melted off and I was starting to feel like myself again. I could go for longer walks with my baby, soon I didn't need an afternoon rest when she napped, I was becoming me once more. I should add that my husband had put on about 15 lbs of "sympathy weight" and that was gone in the same period of time. He has noticed an improvement in his athletic performance and he sleeps better and did not struggle as much with persistent nasal congestion has he has in the past during the wintertime.

I had the same symptoms that lots of new moms have -- I was hungry ALL. THE. TIME. and I was tired ALL. THE. TIME. However, I just had to create opportunities for myself to make the right choice. For example, I put a banana and a glass of water on a table in my baby's room at night before I went to bed so I was ready for the hunger pangs that hit during those 3am feedings. I was getting burned by wandering down to the kitchen and mindlessly eating at that time, so I made a small modification that helped me make my eating habits more intentional because I couldn't trust myself to be rational in the middle of the night after a feeding. While I was still on maternity leave, I would make mega batches of HH recipes, many of them in a crock pot thanks to the guide that is on the blog. Then, I portioned out and froze them for when I went back to work. It has been a lifesaver! I was worried that the stress of finding my balance between family and work would throw me off again, but having prepared meals helped bridge the gap when I was traveling or was just too spent to make anything at night. Another saving grace was the meal plans -- my husband could have his quality time with our daughter and I could have a couple of hours on the weekend and prepare meals for the week. Sometimes I would sub recipes in or out, but I could make everything at once and then just be done and focus on my family. 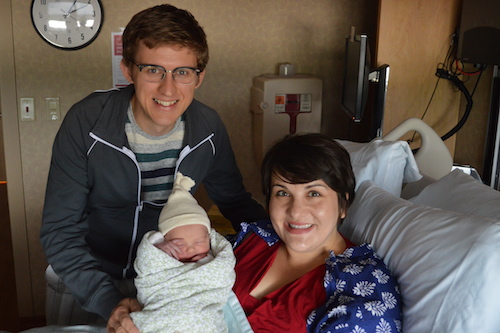 Being a first time parent is an exercise in balance. Everything in life changes and it's so exciting, dynamic, enriching, exhausting, challenging, rewarding, terrifying, and intense. Nobody has the same experience and that's part of what makes this time in one's life so complex. Our baby girl is almost 9 months old now and we have learned that, as soon as we hit our stride with a schedule or routine, something changed and we need to recalibrate. Because of this, it has been important to develop specific routines around our diet so we are eating well. I cannot tell you how many people tell me that I look far too fresh-faced and rested to be a new mom. They want to know my secret. My secret is that I make sure to get enough sleep and I eat a plant-based diet. Our families have been supportive of our dietary shift for the most part and we have a very healthy plant-powered baby! She loves sweet potatoes, apples, bananas, and zucchini.

I am very pleased to share with you that at 9 months after giving birth, I am down a total of 61lbs from the day after my daughter was born. While a lot of that was water weight (I had some serious edema!), I am currently 17lbs under my pre-baby weight. I am going to keep going. I would like to lose another 15lbs, but I would be happy where I am at, too. I feel great! I haven't been running since I did a 5K when I was 32 weeks pregnant, but I do go for walks a few times a week with my baby in the carrier, practice yoga about once per week and do baby swim lessons with my tiny lady. I am hoping to do a 5K again later this spring and have started my training for it. Other than that, I am just making sure to put good things in my body.

I hope that my story helps other mamas out there -- I really thought that my distended, postpartum belly was my new normal. It is only temporary. Feeling tired all the time is temporary (or maybe you just get used to it?). In some ways, this is a great time to start new habits -- having your life turned upside down with a new baby is almost like starting with a clean slate. You can start new traditions and habits more easily than you think. Also, I truly believe that mamas need to spend a little bit of time every day to be gentle on themselves and engage in self-care. For me, it might just be eating well that day or getting a nice, hot shower. On a good day, it also includes a yoga session and going to bed early. Be kind to yourselves, new mamas! It will only help you do better with the tiny, new life in your care.

Thank you so much Alisha for sharing your story and congrats on your adorable Herbie baby!

While the scale isn't moving as quickly in a downward direction as it was before (I'm down a total of 65lbs now since pregnancy), I am finding time to get active again and I really enjoy doing so with my daughter. She and I took a parent-child swimming course this winter and next weekend I will be running the Illinois Marathon Friday Night 5K, the first since she was born, and she will be in the jogging stroller with me the whole way. 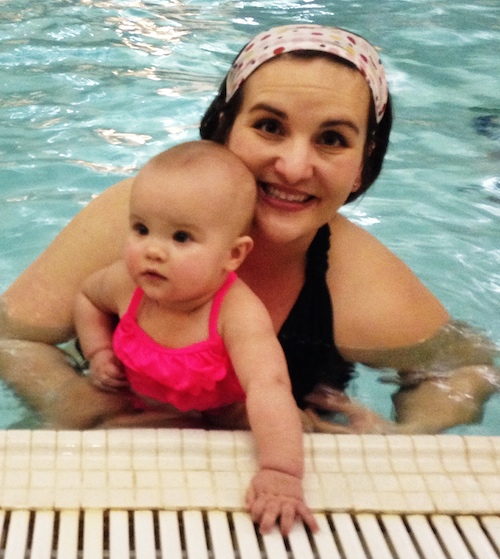