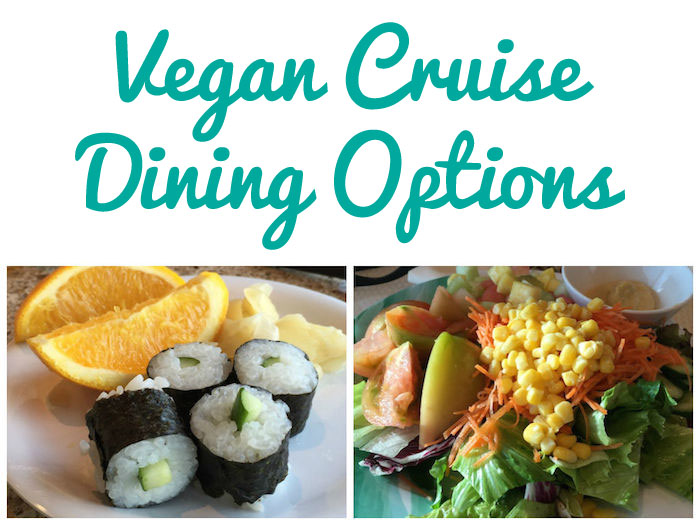 Scott and I went on our first cruise together back in 2007. I was vegan (though not necessarily plant-based, and not yet oil-free) and Scott was vegetarian at the time.

I emailed the cruise company (Costa) ahead of time about our dietary requirements, and they assured me they would accommodate us. To their credit, Costa offered three set dinner menus each night, one always being fully vegetarian. Unfortunately, the vegetarian option was always cheesy, and when the kitchen is cooking for thousands of people at once, it can be difficult to get a customized order. “Oh it's already made miss, with the cheese cooked inside.”

When I couldn't eat anything except sorbet on the first night's dinner menu, the head food and beverage guy came out, asking about my dietary needs. After a brief conversation “I eat this.. I don't eat that...” he came back with rice stuffed bell peppers that were excellent.

Each night thereafter I had a special vegan meal waiting for me. The other couples at our dinner table often remarked how good my food looked, and how they wish they could have ordered what I was having instead (win!).

Then, at the end of the cruise, the chef himself came out and thanked Scott and I for the opportunity. He explained that they had a set 14-day menu they cycled through non-stop for a year! Thus, it was a real treat to be “creative” and cook on a small scale. He even said he'd personally eaten some of the foods he'd made for us and wanted to do more vegan fare!

For breakfast and lunch, we were “on our own” but it was pretty unexciting. They had cereal, but no soy or other non-dairy milk available. We were limited to bread + jam and fresh fruit. It could have been worse, but I was pretty disappointed there was no oatmeal or veggies. At lunch there was a small salad bar, but it was mostly iceberg lettuce, tomatoes, canned corn-- nothing to write home about. I basically ate french fries or potato wedges, salads, and a lot of fruit. Scott made use of the pizza station.

Almost 8 years later, we decided to go on a cruise again since it seemed the easiest way to get around Asia and I knew there would always be a salad bar available to me if I didn't find anything while out exploring.

Although our previous experience was good, I was worried. Mostly because this cruise was two weeks long – 13 days! I couldn't fathom only having white bread and fruit to eat for breakfast, or having only iceberg salads at lunch with no beans or potatoes or other “filling” foods for 13 days straight. (Especially knowing I would be doing so much walking and “sightseeing” everyday.) And what about dinner? Was this new cruise liner going to be as accommodating?!

As soon as we booked, I contacted Diamond Princess about our dietary needs. The girl I spoke with said vegans sail with them all the time and have a pleasant experience.

While this was comforting, I was still uneasy... I needed more than “vegan” options. I didn't want to eat french fries and white bread. I was determined to stay oil-free and plant-based :) Plus even small amounts of oil cause me digestive chaos – something I didn't want to deal with onboard or while out exploring. (The “squatty potty” aka a hole in the ground is the standard option – no western toilet...)

After a few more frantic emails, DP told me I could bring my own food if I wanted, as long as it was commercially prepared and in commercial (unopen) packages and it didn't need cooking, or could be made with hot water (i.e. McDougall soups).

I filled an entire suitcase with food :)

For a list of all the travel foods and brands that meet this requirement (there are a lot!) see the full list in my Guide. And I brought most of it home! So you know good news is coming :)

(FYI I apologize now that there aren't a lot of pictures. Taking pictures of your food was social suicide on the cruise. It was really awkward and unwelcomed. I don't think many other cultures take pictures of their food the way Americans do... at least that's been my experience living in Europe and now spending three weeks in Asia with 2400 other people, most of whom were not American).

At breakfast, there were plenty of breads (including whole grain breads), fruits, and oatmeal! I'd brought dry oatmeal on board as a precaution, and toward the end, we started making overnight oats just so we didn't have to fly back with it. They also had soy milk and rice milk by request if I wanted cereal or coffee. Additionally, because this trip was in Asia, and many guests were Asian, there was almost always plain rice at breakfast (along with whole fishes and miso soups that I wished were vegan!)

My FAVORITE was their baked apples – just plain baked apples. They didn't have them everyday but when they did I gorged myself. It was embarrassing. (They also had Vietnamese cinnamon on board. If you haven't had “real” cinnamon—you're missing out!)

I also saw roasted potatoes, baked tomatoes, and some other cooked vegetables at breakfast that were vegan – they were clearly oily so I didn't try them. They also had several jams and pb.

DP also had a small salad bar every day at breakfast. It was your basics: mixed greens or romaine lettuce, shredded carrots, tomatoes, cabbage, corn, and a few other mixers. (In Vegan in Europe I talk about how I got used to eating salads—especially tomatoes and bell peppers at breakfast. Yum!) 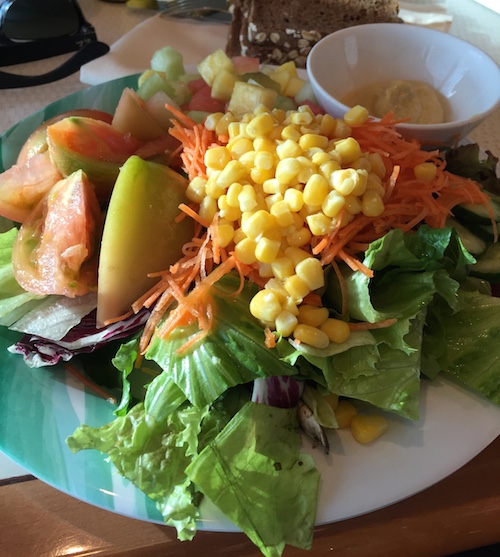 At lunch DP's salad bar exploded with 2-3x more mixers. They often also offered themed salads stations in addition to the regular salad bar too! For example, they did the “Asian” theme a few times, so there was sprouts, bamboo shoots, baby corn, seaweed, freshly made tofu, daikon, dragon fruit, and other “Asian” foods in addition to your basics: cabbage, tomato, carrot, olives, corn, onions, cucumbers, beans (4 types!), green beans, etc. (The beans were cooked from scratch and soooooo delicious!)

There was also daily sushi options since we were in Asia. Cucumber and other vegetable rolls were pretty common. They also had a noodle station, and while the broth was not vegetarian, the noodles sometimes were. It depended on the day. I became obsessed with soba and soy sauce + scallions. 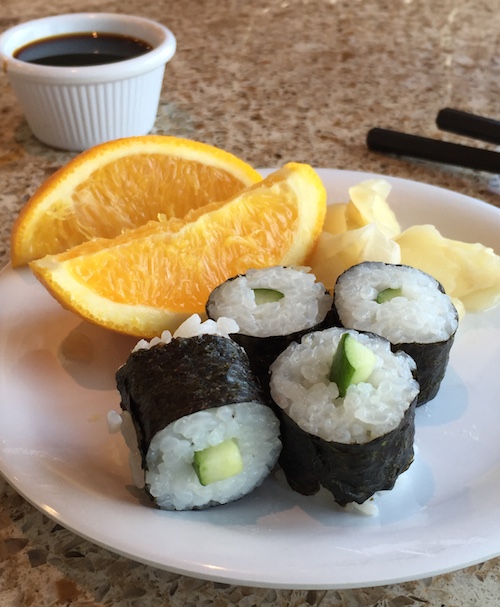 There were also several “hot” vegetarian options at the buffet, many of which were vegan. For example, there was a different Indian dish such as chana palak or green bean curry at lunch and another, different, Indian option for dinner every day. Scott got a small helping each time (if it was vegan) and said while it had oil, it was not very oily. He raved about many dishes. I think there were only two he didn't care for. That's pretty impressive all considering.

You can see his food behind my big ol' salad: 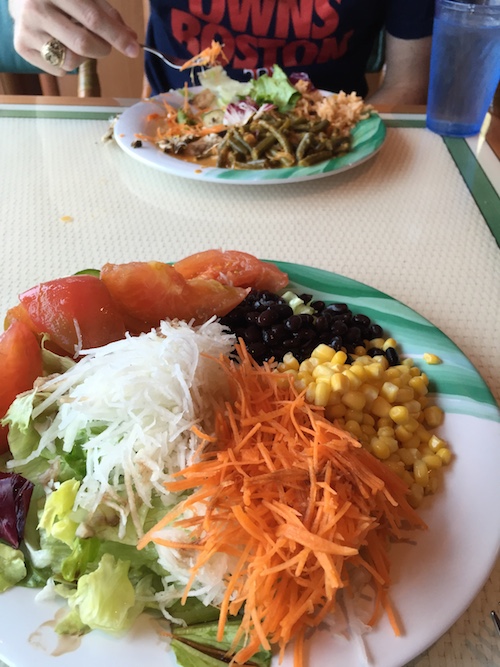 They also had a rice option at every meal and usually it was “flavored” in some way such as Mexican rice or Creole rice, plus plain steamed rice in the biggest rice cooker I've ever seen. I'm pretty sure I could have sat in it!

There were also pasta dishes most of the time that were vegan. Just your basic pasta and marinara or pasta with oil or pasta with vegetables.

Even on theme dinner buffet nights, like the “French” night, I was surprised to see so many veg options, like the vegetarian ratatouille that was vegan, or the two kinds of sauerkraut, beet salad, and pretzels on German night. (I never tried any. I figured they all had oil and didn't try them, but it smelled good!) There was also no shortage of veg Asian dishes like Pad Thai.

There was one other dinner option: the formal dining room with set menus. Just like with Costa, DP had set dinner menus nightly, and there were always vegetarian choices. Many selections could be made vegan if you left off the cheese or egg, which was possible most of the time.

Unfortunately, those items could not be made without oil. They only option for me were the sides: steamed rice, steamed vegetables, a baked potato – and I like those things, but after a few nights I tired of it and we started going to the salad bar to choose our own adventure for dinner, too. There were so many different salad bar choices (at least 20 options) and a lot of the mixers changed meal-to-meal, day-to-day, that I never really got bored. Plus there were always different breads, different fruits, and other “clean” foods to keep it interesting.

There was also a “grill” on board that had a vegan veggie burger, and a pizza guy, who I'm sure would have made us a vegetable pizza without cheese had we asked :)

The only downside is you have no idea what the ingredients are for any item on a buffet line, and the staff working the buffet can't tell you what's in it. Vegetarian items are usually labeled “vegetarian” but that may not help the vegan. We were lucky that we could talk directly to the chef who made the Indian food (he confirmed it was dairy-free; and that on the whole they used oil over butter in dishes). All bread was made on premises, too, so I was able to ask the baker what was clean. As for the noodles, a sweet Japanese man read the package labels for me so I knew what had egg and what did not :)

One funny, final note: I literally exhausted all of their mustard stores. Apparently in two weeks I can eat three jars of Dijon mustard all by myself. Oops.