Meet our Herbies of the Week: Stacy & Jim!

Stacy started researching a plant-based diet after she felt her doctor was telling her she should just accept that she was not going to be able to lose weight and some people need to be on cholesterol medication.

With a little encouragement from Rip Esselstyn, she and her husband began their plant-based journey in February and are loving the results!

So far, Stacy has lost 30lbs and because she lowered her cholesterol, she's no longer taking medication! Jim has also lowered his cholesterol as well as his blood pressure and dropped 20+lbs.

Here's Stacy & Jim's story in their own words...

My husband has always joked that the warranty on the human body expires somewhere around the age of 35. I don't know if he is right or wrong but it is definitely when things started to change for both of us. Realizing that I was now 10 years past that expiration date, I started to feel hopeless so I made a doctor's appointment to see what I could do to feel better, lose weight and be healthier. Personally I don't think 45 is past hope but I left his office feeling more hopeless than ever.

A few days later, his nurse called to give me the results of my blood tests. My thyroid is functioning properly, I am not insulin resistant and the only thing that was negative was my cholesterol at 252 and my weight at 178 pounds. According to the results, there shouldn't be anything stopping me from losing weight. So I asked her what he suggested I try since I am going to the gym at least 4 times per week, eating a low carb diet and ended up gaining two pounds. She put me on hold briefly so she could have the doctor speak to me directly. He told me that I should take a look at my family's body-type and realize that I cannot change my genes. Basically I felt as if he was telling me to just accept that I was not going to be able to lose weight. Just accept that some people need to be on cholesterol medication. He did recommend a local nutrition center but when I checked out their website, I decided I was not confident in trying a place that touts a liquid diet as a quick solution. It has been a lifetime of "quick fixes" that has helped me to end up in this situation. Not to mention as a personal chef... kind of hard to not cook meals. As you can imagine, I felt even more hopeless and angry at this point.

So I did the only thing I could think to do. I got on the Internet to start looking for alternative solutions. As soon as I logged on to Facebook, I saw an advertisement for Rip Esselstyn's seminar and book signing. I knew of him from the documentary, "Forks Over Knives", and that he had written a book about a plant-based diet, "The Engine 2 Diet". To my surprise, his event was just a couple days away, was free and being held at The Ohio State University, which was very close to where we live. I immediately called to get tickets for me and my husband. I am so glad that I did. Listening to Rip speak, reminded me of the information that I had learned about plant-based diets in the documentary, "Forks Over Knives". As he continued to talk about the changes a plant-based lifestyle and removing overly processed foods from your diet can make in your overall health, I started to feel hopeful. Yes... I do wanted to lose weight as did my husband, but the real goal was to find a way to be healthy and not need medication to live. I was on cholesterol medication and my husband was on medication for cholesterol and high blood pressure.

What is ironic is that my husband, who works in film and video production, actually worked on "Forks Over Knives". He didn't realize it at the time. Jim just thought he was working on something internal for the Cleveland Clinic. It wasn't until he came home one day and I was watching "Forks Over Knives". He recognized the interviews and made me start the documentary over from the beginning so he could watch it too. Guess that was a sign we should have been plant-based long ago. 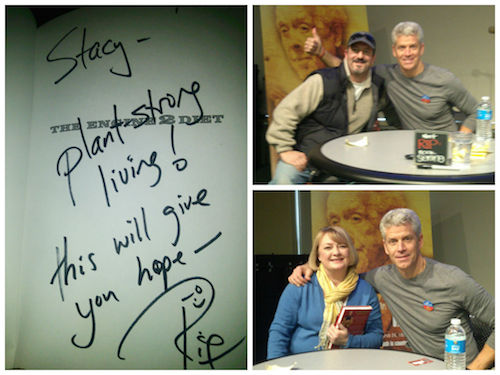 As you can see in the picture, I had quite the roll around my middle. I was up to a size 14, which was the biggest I had ever been in my life. I wore the scarf to try to disguise my fat... looking back, I was not all that successful. As you can see even my husband stayed pretty covered up; t-shirt, polar fleece and his vest. Neither of us liked to look in the mirror.

When I met Rip and asked him to sign my book, I told him briefly about the conversation with my doctor and how it left me feeling hopeless but that I didn't believe that my husband and I were beyond help. In my book, he wrote "Stacy, Plant-Strong Living! This will give you hope!"

And it has. All of the websites, blogs and plant-based cookbooks I have found have continued to give me and my husband hope as we continue on our journey. Discovering the Happy Herbivore's Mushroom Gravy has been a real life-saver! :) I grew up in the south... we love gravy on everything.

Jim and I started our plant-strong life in February 2014 and as of today, I have lost 30 pounds and dropped my cholesterol from 252 to 144! My husband, Jim, has lost 20+ pounds and his cholesterol is down to a safe number. Unfortunately, I don't know his exact number. Also his blood pressure is normal and he told me the other day he only takes his medication about every other day. I quit taking my cholesterol medication when I started the challenge and Jim has decided to no longer take his cholesterol medication as well. Living plant-strong has changed our lives so much. We both feel better and have more energy and to top it off... (and I love hearing this).. "Wow Stacy... you look so much younger!". What middle-aged woman doesn't love hearing that??

As a person on the short side (I am just under 5' 1”) and currently at 148 pounds, I still have a little ways to go on the weight loss, but I am happy with the progress and don't feel as self conscious as I did. I used to hide from cameras and if it was absolutely necessary that I be in a picture, I would make sure I was in the back of a group, was holding something in front of me or the picture was taken from the chest up. But even then... I just wanted to hide and always hated seeing pictures of myself. My husband even hid from cameras. His technique was to be sure he was the person that was taking the pictures. Below is one of the few pictures I could find of my husband that was more than just his face. This was taken in July 2013 with his college friend while they were in Pittsburgh. By the way, now when he wears that green shirt, it just hangs on him.

Jim and I have discovered the joy of fitting into those clothes that we always swore we would get into again. I would have to say that fitting into those clothes is even better than buying new! Well... almost. Jim was excited when he realized that he needed to put a new notch into his belt and found that he was able to fit into all of his summer clothes. Some items had only been worn a few times but he didn't want to let them go. 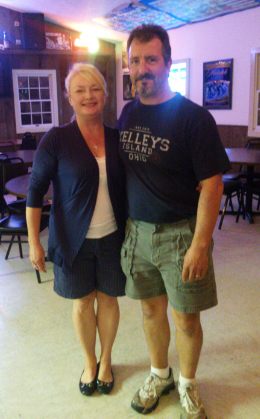 This picture was taken in August. Just seeing it gives us the motivation to continue on our plant-based path.

Our new path has also enhanced my business. I am a personal chef and although a good portion of my clients still eat meat and dairy, a few of them want to start adding plant-based meals to their menus because they have seen the success I have had with my weight and they are even more impressed when I tell them about my cholesterol. Going through this process has even changed how I cook for my clients that still eat the Standard American Diet. I don't use oil and I have adapted some of the standard recipes to reduce any added fat and salt. This week I start cooking for a repeat client from last year and guess what? She wants me to cook all plant-based for her and asked for my assistance to help her transition to a full plant-based diet. Who knew that taking control of my health and weight would have such an impact on my career. I am really glad though. I feel that this is my way of helping others the same way I have been helped. So I guess in a way, I am paying it forward. :)

Thank you so much Stacy & Jim for sharing your plant-based journey with us!