Herbie of the Week: Amy B (She's Lost Over 100lbs Following a Plant-Based Diet!) 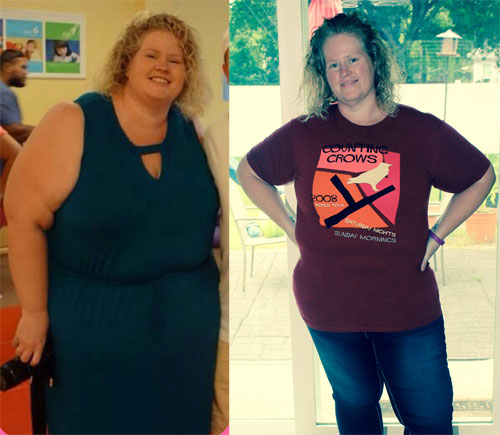 Meet our Herbie of the Week: Amy B!

Like many Herbies of the Week, Amy struggled with her weight for most of her life. After suffering three miscarriages (which was followed by depression) and then stress from being a first-time parent, Amy realized her weight was out of control and her vegetarian diet wasn't as healthy as she thought.

Just before her 40th birthday, Amy decided to make a change. She committed herself to a healthier lifestyle by going plant-based and the transformation is incredible!

In less than a year, Amy has lost more than 100 LBS and lowered her blood pressure and cholesterol. On top of that, she's also running 5 and 10Ks!

Continue reading for Amy's truly inspirational story in her own words!

I was raised a vegetarian and was always aware of the cons of eating animal meat. Eating vegetarian was never an issue for me. As I went out on my own, I did start eating some poultry and fish, but went back and forth between vegetarian and omnivore. I have also struggled with my weight most of my life. I would yo yo on diet fads that never seemed to last.

I was at one of my best (healthy) weights when I met my husband, but it was due to poor nutritional eating and near starvation. So, not surprisingly, once we married I started putting on some weight. Then the unthinkable happened; we decided to start a family but I had 3 miscarriages in a year and a half. My depression set in and my eating went out of control. I was eating fast food at least 4-5 times a week, and the home cooking I did was all "comfort foods". My husband and I decided to try fertility treatment, which brought on its own set of stress and uncertainty (and more unhealthy eating). Within 12 months of seeing the fertility specialist, we were blessed with a beautiful baby girl. All of my fears and stress over having a family fell away and were replaced by the fears and stress of being a first time parent.

By the time my daughter was a year old, I realized my health and weight were out of control. I was borderline requiring blood pressure meds (since I had gestational hypertension), I was completely sedentary as a stay-at-home mom, and my bad cholesterol was starting to creep up. I decided it was time to revisit being a vegetarian, thinking this would help in my health and weight issues. Well, two years went by and I was at my heaviest weight and the doctor was having me monitor my blood pressure at home on a daily basis to evaluate my need for medication, also I was given a script for a knee brace as I had developed arthritis and bone spurs in my knee due to my weight. 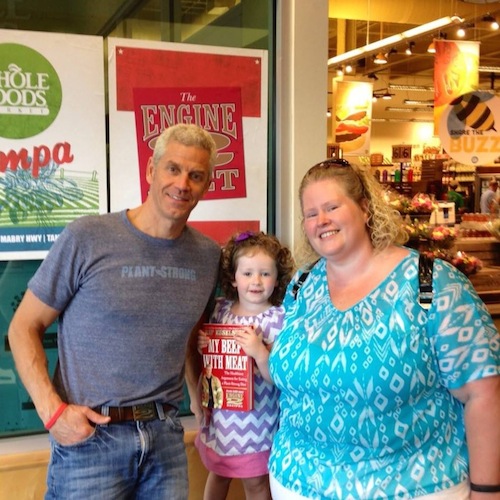 In this scariest, and lowest point is when it occurred to me that this vegetarian lifestyle is not as healthy as I assumed it was. Coincidentally, at this time while I was shopping at Whole Foods, I saw the Engine 2 Diet book. I loved the summary and decided to give it a read. Every single word spoke to me. Eliminate animal products, eliminate oil, and eat the source of the food, not the manufactured product. He (Rip Esseltyn) referenced other resources like The China Study and Forks Over Knives, so I researched them, as well. I was horrified at the mass production and industrialization of food. It made me question not only what I was putting in my body but what I was allowing my child to eat. My husband and I discussed it and made the decision to convert to plant-based vegan.

It started slow, just a vegan meal here and there and then trying vegan for a day. This went on for about 6 months. Before I knew it, my 40th birthday was looming. I was quite aware that turning 40 was more mental than physical, but I also knew (from friends and family) that if not resolved, health issues can go out of control after that magic 40 number. I knew just "playing around" with being a vegan was not going to accomplish the health goals I needed. I was turning 40 and it was crunch time. I made a conscious decision to go completely plant based vegan.

This decision meant I had to find recipes that can be versatile enough to eat every day, every week, and would be acceptable to my omnivore husband and (at the time) my 3 year old picky eater. Sounds like a huge request, and it felt like it was, as well. I couldn't find recipes that the whole family could agree on. So, I went to the book store with the mission to find a vegan cookbook with family friendly recipes. On the shelf at eye level and turned face out was Everyday Happy Herbivore. I started looking at the recipes and realized that this was the help I needed. Real food, no oils, vegan, and a fantastic bridge for omnivores. Foods that I knew we loved (Cheater Pad Thai, Tofu Ricotta, Tofu Scramble, and Rustic Chili are just a few of our favorites). I honestly think if I hadn't found Lindsay's books, I may have decided going vegan just wouldn't have worked as I refuse to cook three meals every night. 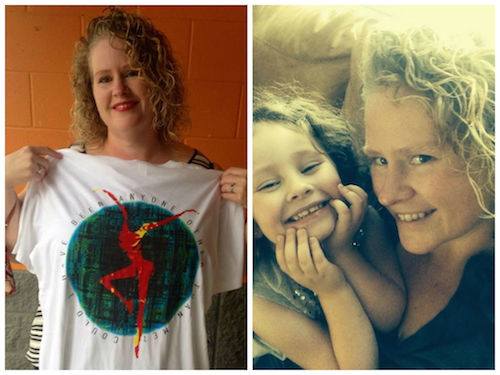 So last October (2013), the month of my 40th birthday, we committed to a new, healthy lifestyle. I joined a gym and started slowly, a few days a week. However, I noticed eating healthier and cleaner gave me more energy and I quickly started adding aerobics classes to my routine. I was not feeling hungry or deprived. My biggest struggle in going vegan was giving up dairy products ("but I love my cheese, yogurt, cottage cheese!"). Astonishingly, after a month of no dairy, I no longer craved it! Amazing! And during this time I discovered I had a mild case of lactose intolerance that I had never realized. I just assumed everyone had these gastric problems when eating.

I've been vegan for 10 months now, and thanks to clean eating and lots of exercise, I have lost 100 lbs, lowered my blood pressure from 130/90 to 110/76, and lowered my bad cholesterol while raising my good. I have recently started jogging and am signing up for 5k runs every chance I get. My next fitness goal is to run a 10k next year. I get so many compliments not only on weight loss, but also my skin/complexion and my age (no one ever believes me when I say I'm 40). I still have more weight to lose and many new fitness goals to achieve but I want to celebrate every milestone in this healthy journey. And I wanted Lindsay to know how much her recipes, books, and communities have helped me become the best vegan I can be.

This isn't a perfect journey and I've made poor vegan choices along the way (deep fried tofu, vegan whoopie pies, animal crackers, to name a few), but I never let it derail me and I picked right back up on plant based choices at my next meal. And the bonus to this is my husband (who's never had a weight issue but does have cholesterol issues) has lowered his cholesterol and lost a few pounds, and my now 4 year old daughter loves "mommy foods". She eats hummus right along with me, along with steamed broccoli, black olives, carrots and pita chips! She is beginning to understand why fast food is not a good source of food and she loves to help me in our garden, picking tomatoes, peppers, carrots, and herbs. I can't imagine ever returning to our previous lifestyle.

Thank you so much Amy for sharing your story! Your are such an inspiration!

I am actually 105 lbs down now. And have officially signed up for four 5ks and my very first 10k from now through November. And my goal is to run a half marathon next year. Also, my husband (who now eats vegan by default, since I am the cook in the family) has just been taken off his statins due to dropping his cholesterol over 20 points in the past 6 months.