A Vegan Taste of Paris + A Sneak Peek at My Vegan Europe Travel Book! 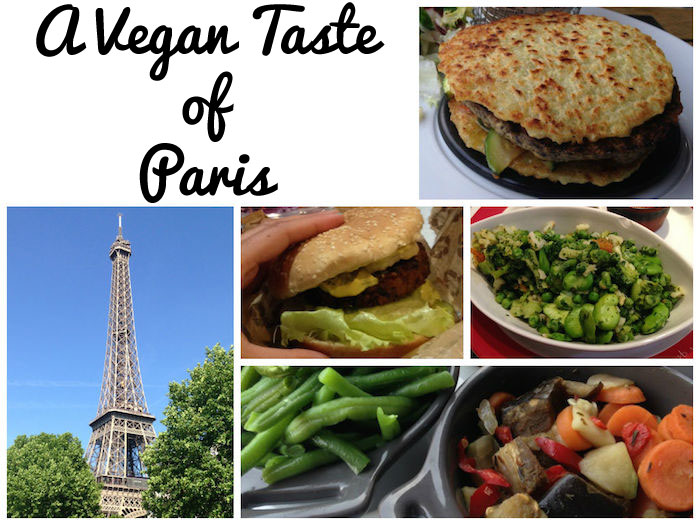 I'm home (I think I mentioned that?) from my summer in France :)

I'm also finishing up my vegan Europe travel book!!! It should be here in the next week :) :) I'm really excited about this book! (You can read more about it below)

To say good-bye to my summer blog travel series (and whet your appetite for the new book!) I give you today's post!

I spent the bulk of my summer in the French countryside and South of France. It's not that I don't like Paris (I do, though not as much as most Americans) but I also knew I couldn't do Paris all day, every day for a month. It's a bustling city, which is exciting, but my retreat to France was to get away from my city life in America :)

I need quiet. I needed sleep. I needed to read and eat baguettes!

But still no trip to France is complete without a rendezvous in Paris...

Scott was hungry for "American" food, so we went to Hank, an all-vegan burger joint. I'm not usually one for faux meat, or burgers, but I have to say Hank delivered! 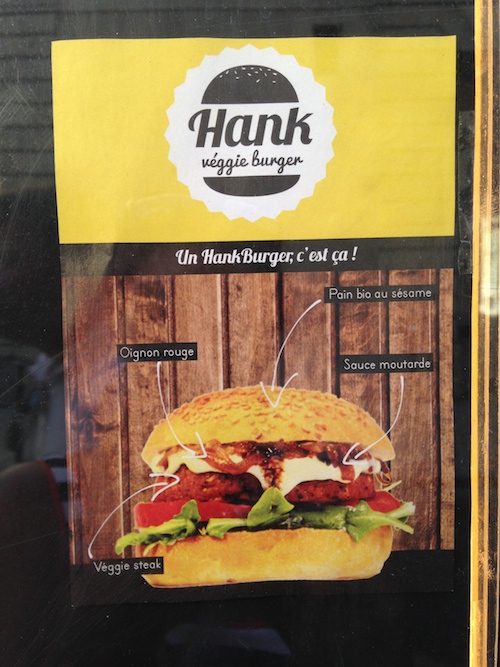 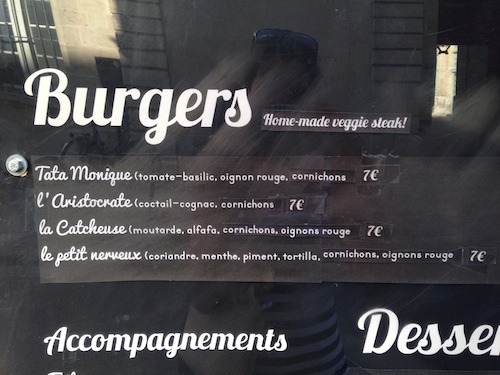 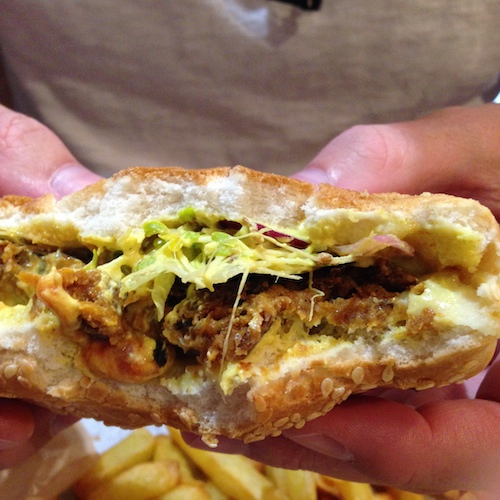 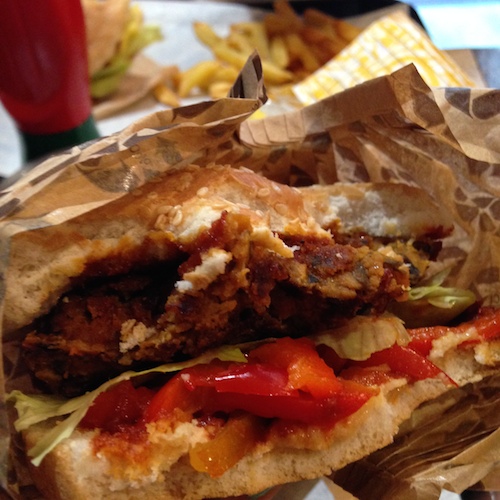 I was also delighted to see our hotel had a vegetarian menu at their bistro. 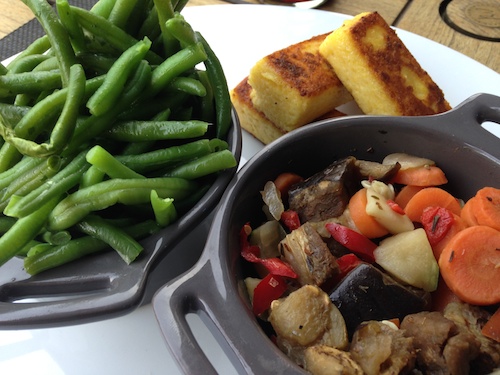 There's a chef's vegetarian special each day from whatever seasonal veggies happen to be in the kitchen (this is common in French cuisine -- daily menus or luck of the draw-type options). The chef explained he could prepare it vegan if I ordered the green beans without butter. He also accommodated my oil-free request for the veggies and did a steam and dry-saute.

P.S. That's polenta fries in the back. Basically polenta cut into strips and pan-fried. Since it was fried I didn't give it a go, but everyone else in the restaurant seemed to really love them.

The house-made burger was also vegan, which Scott ordered. The bun they normally served contained cheese, so the chef created some kind of chickpea flour-based pancake for Scott to use in lieu of a bun. It wasn't exactly a crepe, but I think it was some distant relative to socca. He liked it! 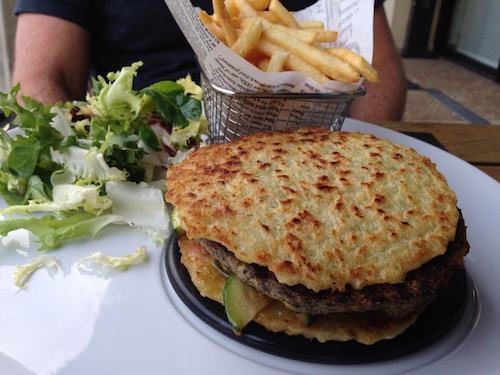 Here's a menu I saw posted outside a restaurant near the Eiffel Tour. We didn't eat there, but I wanted to share the menu as sort of proof that Paris does understand vegan and vegetarian.

I saw a lot of menus with this icon, both in and outside the tourist bubble. 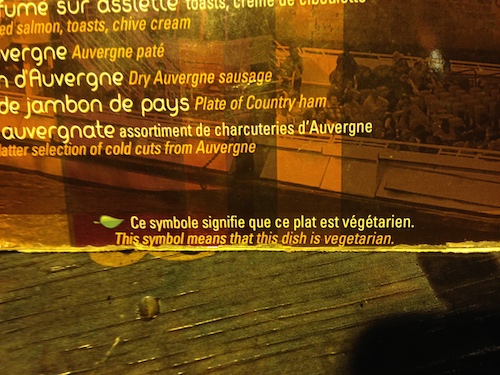 Paris does cater to vegetarian and vegan diets -- if you know where to look.

Here's a short paragraph from my Vegan in Europe book that applies to all of Europe, but most especially Paris:

[...]I’m delighted to say my first month-long trip across 13 countries was a breeze and places where people swore I would starve (like Germany and Ireland) were, and still are, some of the most vegan-friendly places I’ve ever visited...

[...] Having traveled extensively over my home continent as well (46 states and counting!) I can say I find Europe only slightly more challenging (because I don’t always speak the language) but (and this is a big but!) I have also found an array of “vegan things” (like vegan yogurt) at even the tiniest stores, in the tiniest of European towns, when I can’t same the same for America (though it IS getting better).

Point is, like in America, some places are more veg-friendly (or veg-aware) than others, and patience is always key. And also like in America, there are some Europeans who can’t be bothered to help you out (and think vegans are just plain lame—or whatever cool, trendy word there is for “lame” in European lingo) but there are oodles more that are respectful if not inspired by your gumption!

[...] To avoid frustration, you need some semblance of a plan. Otherwise you’ll walk around the city mad and frustrated that all the places you pop into don’t appear have a vegan option. (This is where I think the reputation for Europe being veg-unfriendly comes in, even though American restaurants are no different in this respect. You can walk around New York City or Chicago and have this same experience). [...] 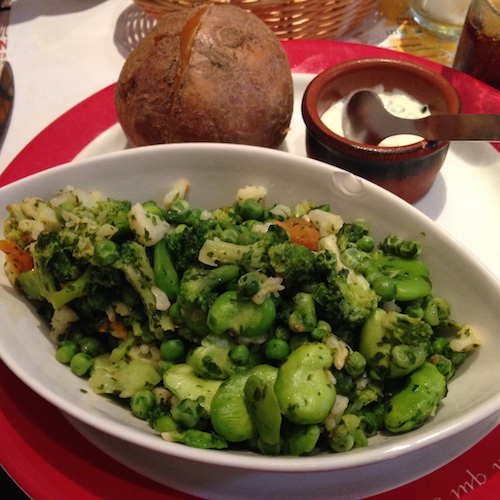 YES YOU READ THAT RIGHT.UNLIMITED baked potatoes! (They also have 20+ locations in France, many right off their highways). 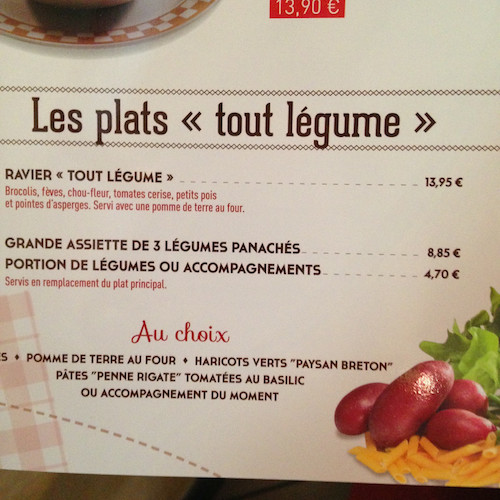 Speaking of potatoes, I also found this baked potato stand at Versailles. I sort of want to bring that to America. Can't you just see me standing on a street corner in Midtown Manhattan selling potatoes instead of hotdogs?! 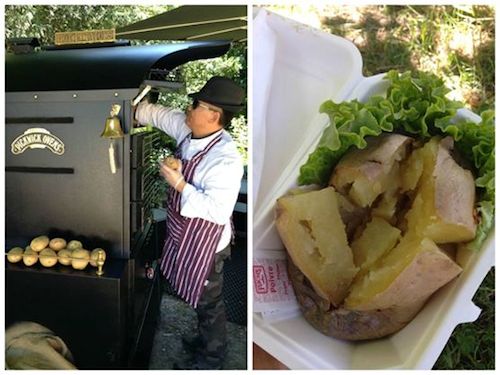 I also ate 37 baguettes in France and lost 0.5lb. Scott lost 3lbs. I guess this is our anecdotal evidence that carbs don't make you fat :)

Now for another glimpse into my upcoming book!

About this Book (Vegan in Europe)

This book contains all the information you’ll need to eat, drink, and live la dolce vida as a vegan in Europe.

I’ve included specific restaurant recommendations (including "locals best" restaurants that aren't listed on HappyCow), plus general information about what to expect food-wise in each country (or city), including “accidentally vegan” traditional fare you should try whenever possible. You’ll also find suggestions for what to eat at anyrestaurant in anycity or country, plus what to pack for your trip and what to buy.

Lists of local vegan brands for soy milk, almond milk, vegan ice cream, vegan yogurt, snacks, and other specialty vegan foods (plus where to find them in the grocery store) are also included, along with language tips (including phrases), and cautionary warnings for the all the hidden foods and cultural quirks you need to look out for.

Many chapters also have additional resources such as links to vegan societies, lists of all-vegan stores, or vegan-friendly accommodations.

By the end of this book you’ll be one well-educated traveling Herbie! (And very full, too!)

I love living and traveling in Europe and can't wait to help you make your travels easy as kale pie. (Wait... is that a real thing?)

One of the big features to the book is showing vegan food in supermarkets since I know most travelers (and especially backpackers) can't afford to "eat out" three times a day AND considering most French dining experiences take 3 hours ;) I can't muster up the patience to do them daily even if I had the cash! 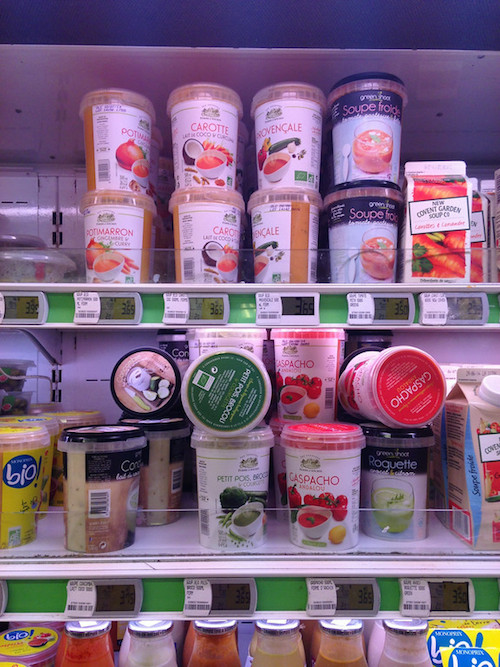 Almost every item in these pics is vegan. (French grocery stores put even the biggest WFM to shame when it comes to vegan-friendly stuffs). 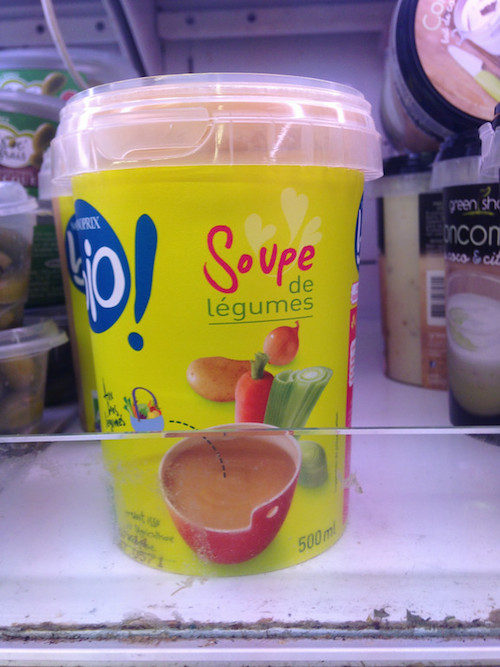 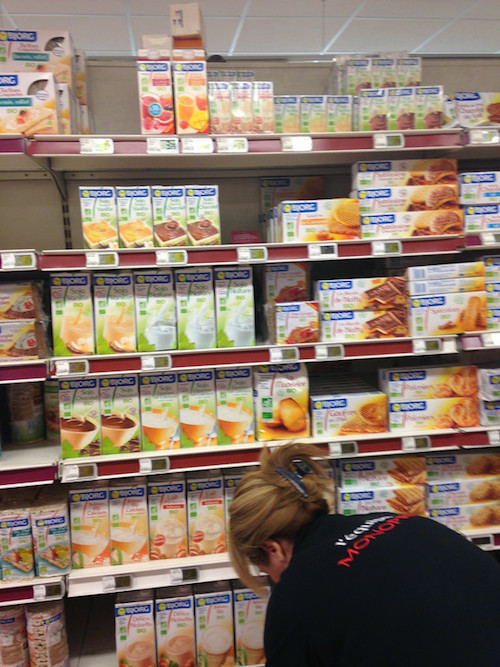 p.s. I'll be selling this book directly via the blog for a week at a discount before it publishes on Amazon and iBooks at a higher price.

To make sure you don't miss out (and to get a free sample!) make sure you're signed up for the FREE Happy Herbivore Insiders newsletter.

(Note: This is not the same as the meal plan newsletter)