Herbie of the Week: Joanne (She's Lost 20lbs & Committing to Do the Best She Can!) 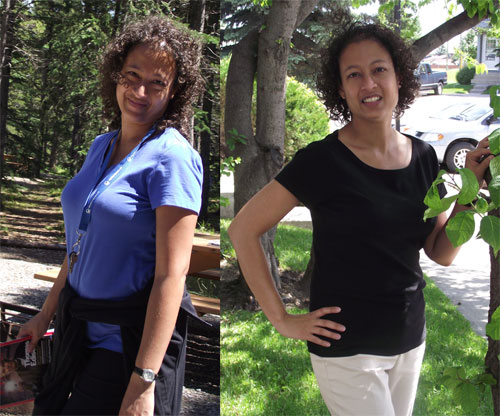 Meet our Herbie of the Week: Joanne!

I received a beautiful email from Joanne before the start of the "Spring Into Health" 28-day Challenge.

In it, she explained how she embarked on a journey toward better health by adopting a plant-based diet.

I thought her story was amazing and inspirational, which is why I asked her to share it for the Herbie of the Week series!

Here's Joanne's story in her own words...

April 2014 was a milestone for me in more ways than one. Not only was it my 40th birthday in April, but it also marked almost exactly 1 year since I started this journey of health.

In April of 2013 I had the opportunity to spend a week at a health retreat. This started my plant-based diet journey. It's not as if I didn't know a lot of this stuff already, but about 18 months earlier I lost my father suddenly and unexpectedly. He was what I would consider extremely health conscious and even though he was 79, he had the health of a 50 year old! When he died I figured, "What's the point of trying to live right? We all end up the same anyway." Within 18 months I had gained 15 lbs and I felt disgusting. After a week at the health retreat I determined to do whatever I could to live better. I managed to lose about 6lbs, but then I just couldn't seem to get past that point.

Then in November of 2013 I had a hunch that even though I was now vegan, I was still eating way too many "good" fats. Often when you look at vegan recipes, they rely on nuts and seeds to replace the taste of all the old foods you're giving up. I was finally ready for another change. I put myself on a 4 day cleanse where I removed all of those things, but also any processed stuff. After the four days I lost some weight and felt really good, but I didn't know what else to eat going forward. Then, not by coincidence I'm sure, I happened to be looking at one of my friend's Facebook pages and it had a link to something called The Happy Herbivore. What on earth is that?? Well, that started a revolution for me. I hate trying new things, especially food because I had a lot of food sensitivities growing up, but all of Lindsay’s recipes looked really simple and didn't use weird or hard to find ingredients.

Since November I've managed to lose the rest of my weight and I'm still losing. Right now I've lost a total of 20lbs! That's the same as two 10lb bags of potatoes! I'm starting to get out and walk more, not in a desperate attempt to lose a pound or two, but just because it feels great and it's good and healthy for me. What a relief to know that it's the food I eat that's the key, not the hours and hours and hours of exercise that some say I need to put in.

The only problem though is that I'm having to buy a lot of new clothes! Even my "skinny me" jeans are too loose and most of my tops look way too baggy! I don't usually like shopping, but I have to admit it's been fun to see people's reactions when they see me in new clothes and realize how much I've lost. And my hubby keeps saying how proud he is of me. I kinda feel like I'm cheating though because it's not like I'm "working hard" or anything. I'm just eating right.

You were a definite answer to prayer for me Lindsay. Thanks for doing what you're doing.

It’s been a while since I was asked by Lindsay to share my story as a Herbie of the Week. Life sure gets busy and that’s one of the reasons I put it off for so long. I felt like I needed to give an update because I’m sure I’m not the only one who finds themselves in this problem—namely letting the busy-ness of life get in the way of their health.

In the last 2 months I have to admit that I’ve fallen off the bandwagon as the saying goes. Not completely and not to the point where I gained all my weight back. But I have allowed people in my life to convince me that "just this little bit" or "once in a while" is OK, as if my choices have been just a short term diet instead of a commitment to health by changing my lifestyle for good. I’ve been really beating myself up about what I’ve seen as my failures until just the other day when I remembered one of Lindsay’s sayings: It’s about progress, not perfection! Wow, I sure needed to hear that.

Yes, I haven’t always made the best choices over the last little while, but each day I’ve also made great choices and it’s up to me to make it a priority to keep making those great choices more than the not so great ones. I don’t have to give in to the "Well, I’ve already made this bad choice, I might as well completely give in," mentality. Instead, I’m committing to choosing to do the best I can, one step at a time.

Thank you so much for sharing your story, Joanne!