Herbie of the Week: Erik B (He's Lost 75lbs & Lowered His Cholesterol!) 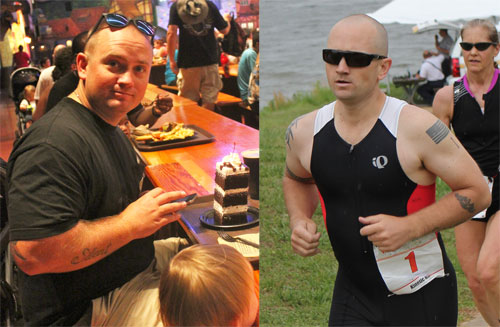 Meet our Herbie of the Week: Erik B!

Erik was nominated as Herbie of the Week by his wife, Kristen, who emailed me earlier this year telling me how he lost 75lbs since going plant-based after Father's Day of last year.

As soon as I read her touching email, I knew he was the perfect candidate!

Erik's journey began only one year ago (in June 2013) after I (his wife, a 15 year vegetarian) decided to watch Forks over Knives per the suggestion of a good friend and fellow Happy Herbivore fan, Monique Burghart. Erik happened to watch it with me with no intention of changing his diet. He was currently losing weight and exercising using a popular weight loss plan which included a diet high in animal based proteins. However, he still felt sluggish and was at a plateau with his weight loss.

After watching the film, I was surprised when he wanted to try a vegan diet. The next day we emptied our pantry and refrigerator of all of those non vegan foods that we would be tempted to eat, and we ordered our first Happy Herbivore cookbook. It was meant to be a 30 day trial, and here we are a year later!

Erik's starting weight was about 240 and he has lost and maintained a weight loss of 75 lbs over the past year. He has also lowered his cholesterol and has so much more energy!

He is a wonderful father who always has time and energy to play with our three children, Oshen (5), Zoey (3) and Leland (4 months) despite his hectic work schedule and exercise routine. In the past 13 months, he has also completed two 100+ mile bicycle races raising funds for the American Diabetes Association, one marathon and one half ironman. To prepare for and recover from his races he eats "Gorilla salads" - huge mixing bowls full of raw vegetables. Its because of this that his recovery time has been virtually non-existent since going plant-based. After his first marathon, he was fully functional, energized even, and kept "going" - making dinner for the family hours after running and waking up with his newborn throughout the night - never complaining about soreness - even running 2 days later! 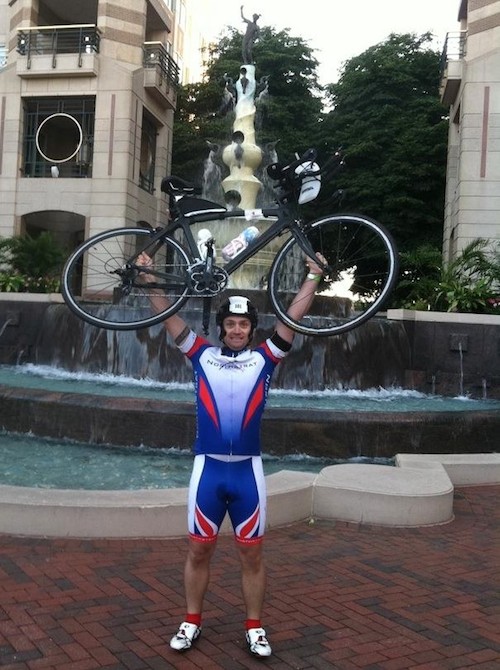 Erik is also in the US Navy, currently on shore duty but serves aboard submarines, and he faces a lot of temptation at work. Co-workers bring in many tempting foods. One week they ordered pizza from Papa Johns, he made it work by using the pepperoncinis to add flavor to his salad! At home he faces even more temptation, with our children's "junk" foods being around (our children are incredibly picky eaters, who are for the most part vegetarian, and we are gradually reducing the animal products that they eat). However, he has "learned" that eating dairy products after not having them for so long, leaves him with severe digestive issues - so severe that it makes the "cheating" not worthwhile!

One suggestion he has for Herbies like him is to PLAN PLAN PLAN. At breakfast, know what your lunch will be, at lunch, know what your dinner will be and so on. Lindsay's meal plans are great for this. If you do not have a plan, with groceries ready and maybe even prepared, you may be tempted to order pizza, go through a drive thru, get quick food whatever that may be! That is why we love Lindsay's recipes. So quick and easy, we make several portions in advance for use throughout the week. Erik's co-workers who are eating fast food are always jealous of what healthy, colorful meals has for lunch!

Thank you so much Kristen for nominating and sharing Erik's story with us!