A Vegan Taste of Nice, France & Monaco (South of France) 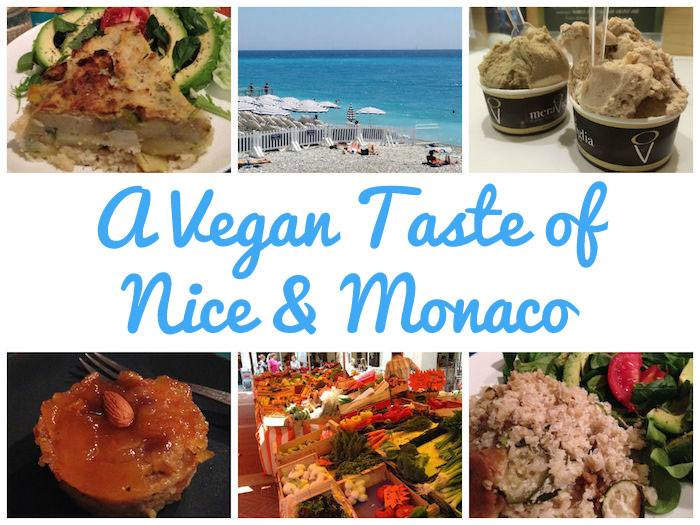 As you may have heard, I'm in France this summer.

We flew to Nice after a quick excursion in Boston and brief layover in Montreal.

When I tell people I'm going to France or living in France (or doing anything that involves France) the first response is: "You can't be vegan there", which is simply untrue.

There's a growing "counter culture" (If I can call it that) in Paris -- a strong, growing group of vegans... along with wonderful vegan eats... there's even an elaborate vegan fest in Paris each year. These French vegans are... well... vegan! in France! ;)

Truthfully, I've never had a hard time in France (or anywhere in Europe) and I lived on a small French island for a year (where I wrote EHH) with no problem.

Point is, you can eat vegan and be vegan in France. As with traveling anywhere, you do need to have a little patience, and doing a tiny bit of research before you go can make a stunning difference!! (See my Guide for more travel tips and help -- there's a huge chapter!) But even if you wing it, you'll be okay.

"Italian" restaurants are all over France (I use quotes because they serve your stereotypical "Italian" dishes, not the more lesser known ones that are celebrated off the beaten path in Italy) -- plenty of salads and pizza (sans fromage) to go around! You can also find vegetable plates, salads, and pasta at other restaurants. I won't lie, it does help that I speak French, but only because I can go the extra mile with ditching oil and removing allergens like broccoli.

Speaking of which, tourist books will tell you it's considered very rude and disrespectful of the chef to "customize" a meal in France... whether that's true I'm unsure (the few French chefs I know don't care) BUT most chefs will be over the moon accommodating if you are allergic. SO if you want to "play it safe", be allergic ;) and explain your reasoning for customization.

In Nice I found an all vegan restaurant, Le Speakeasy, which is run by an American ex-pat. 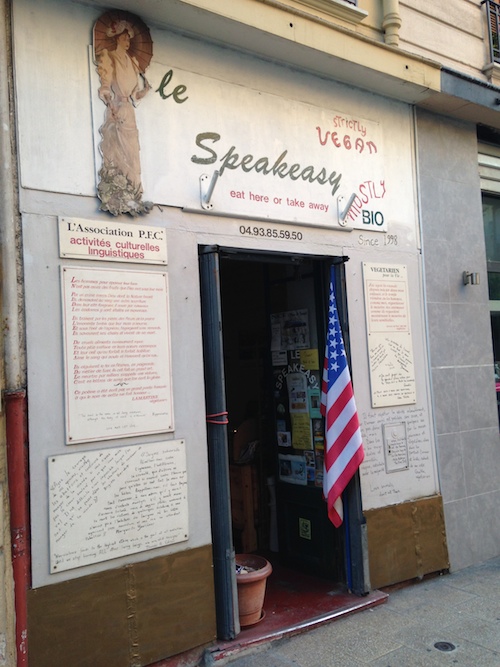 The owner is a sweet lady and eating in her restaurant feels more like you're eating in her kitchen (a la you've been invited for dinner). The food is fresh, healthy, and delicious! The menu also changes daily and I have a soft spot for restaurants with true du jour menus. (The prices are also very reasonable.) 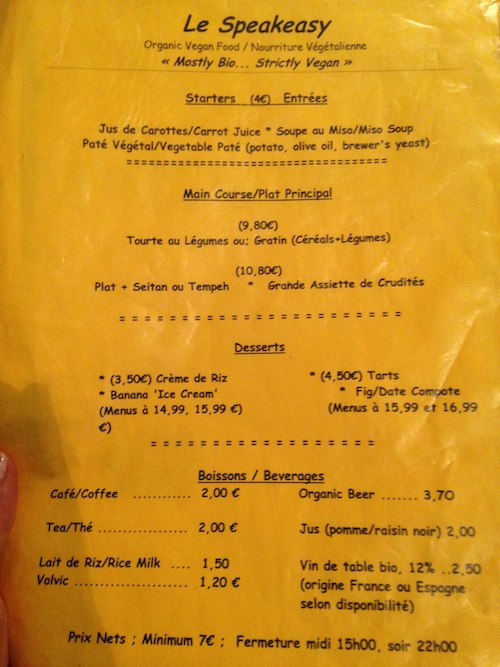 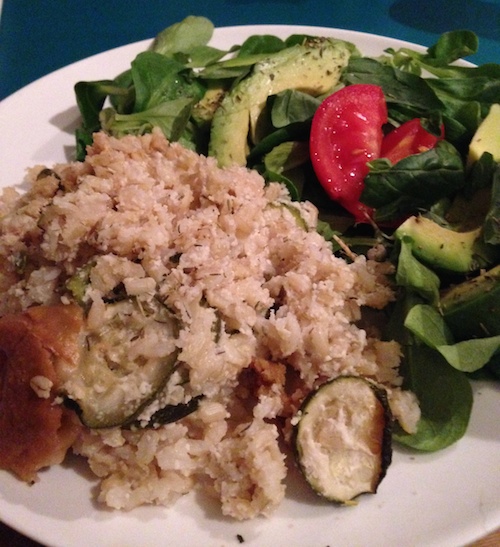 This was the gratin du jour (grain dish of the day) -- brown rice and zucchini (or courgettesas they call them in France). Exceptional! The owner also sprinkled a little soy cheese on Scott's portion. I was thrilled to hear they sell vegan cheese in France! 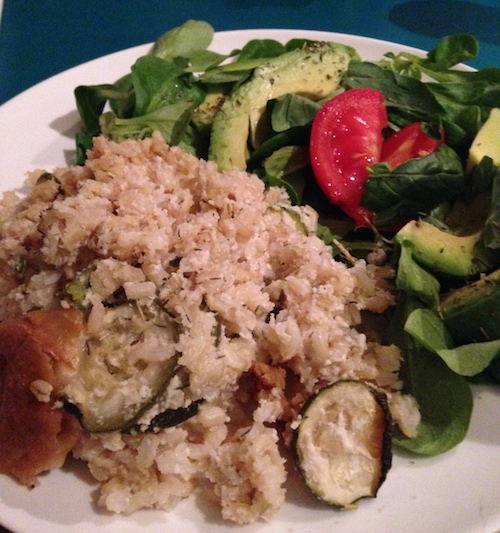 This was the Tourte du jour (day 1) potato and leek -- exceptional. 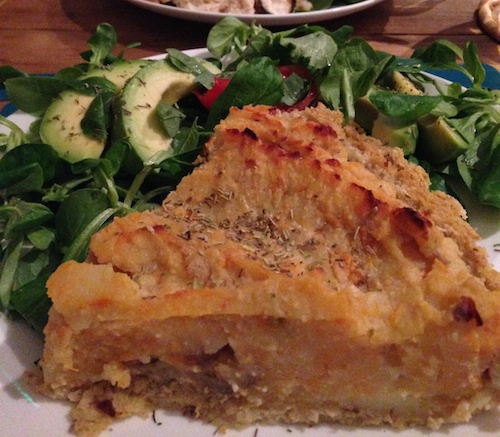 This was the Tourte du jour (day 2) a sweet potato and regular potato torte. I loved this even more than the first one. Also, the crust is always GF.

She also has daily tarts. We tried one each night -- first the apple and then the orange/peach marmalade. So good! (Also GF) 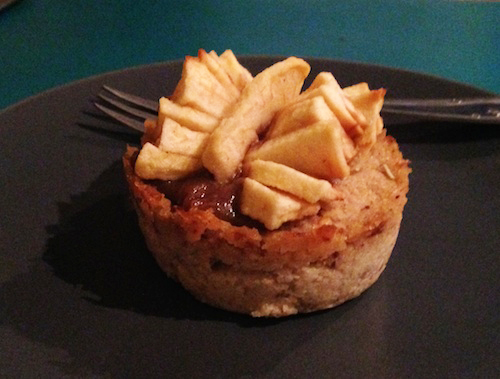 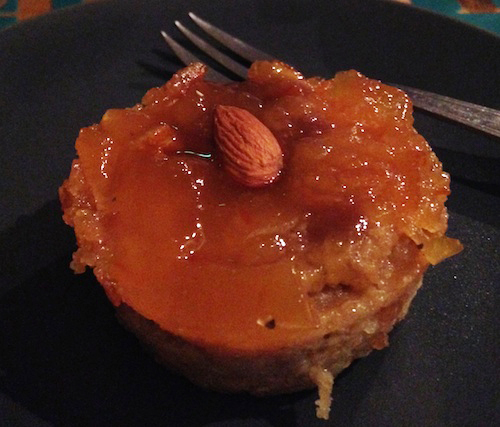 After dinner we wandered around the city for a while and around 11pm called it a night. When I returned to my room, I saw a message from my mom (who is back in the States). I have no idea how she uncovered a place in Nice that sold vegan gelato, but one quick look on the map revealed it was only a few blocks away. It was so close it was stupid.... BUT it was almost midnight.... Still, I had to try!

With a little luck, the place was still open! 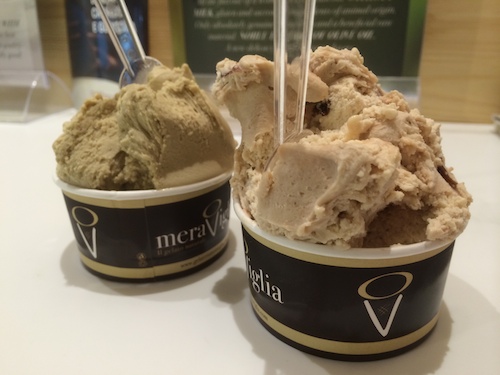 I ordered the Hazelnut, and Scott, the Pistachio. Chocolate was also available, along with three fruit/sorbet flavors.

Another thing I love about the French -- they get portions. Although the picture is a bit deceiving, these were small -- tres petite! Think "kiddie" size in America -- which was perfect. (I need not be left to my own demise).

Sorbet, btw, is all over France and just fruit + sugar... no milk.

Grocery stores are always a herbie's travel bestie, but the ones in France were phenomenal!

The marche (grocery store) by our place is tiny -- I mean, some gas station markets in America are bigger. There are maybe three aisles in the entire store and they have SIX (6!!) flavors of vegan yogurt. (On my first day there were 5, but then they restocked and there were 6).

Here is a picture from my little bodega: 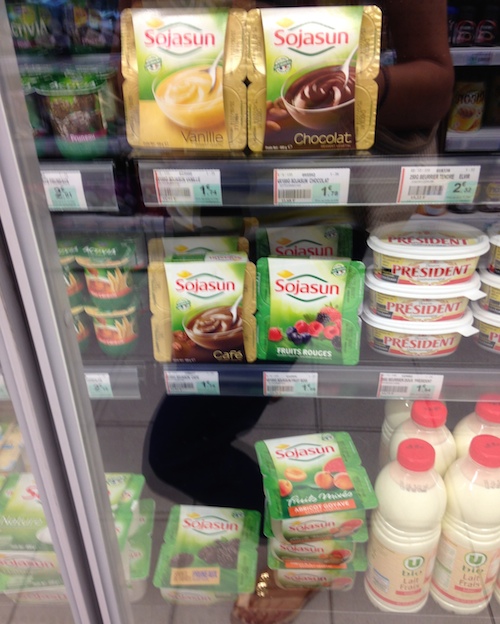 The bigger supermarket has a section that is easily 15x the size of the Whole Foods section in LA! WTG France! 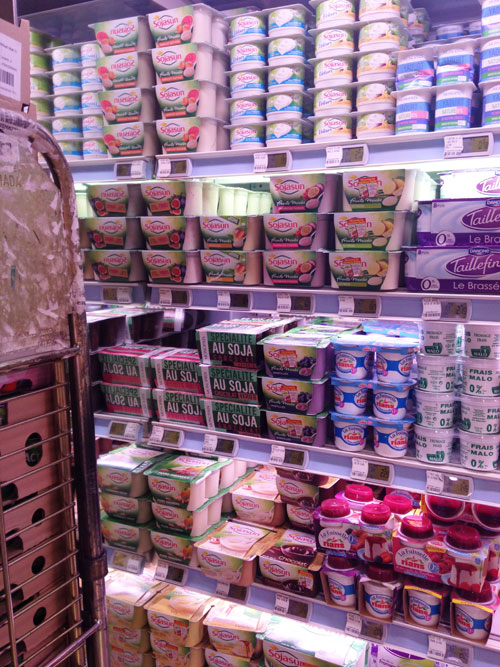 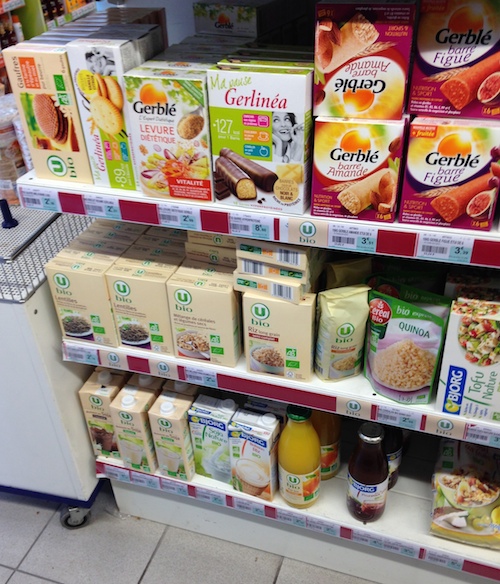 I also am a sucker for fresh produce stands like this one in Monaco and am happy to say they tend to exist all around Europe. 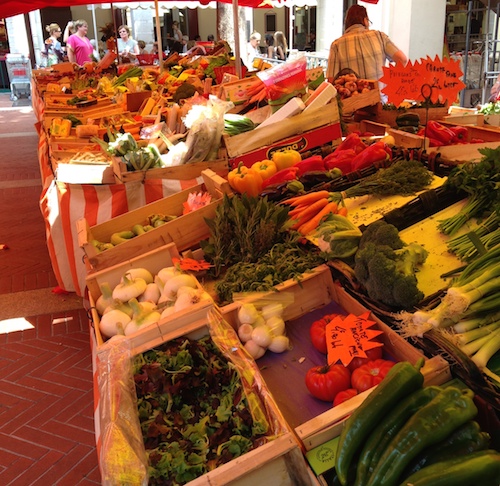 Oh, right. We also took a day trip to Monaco ;) 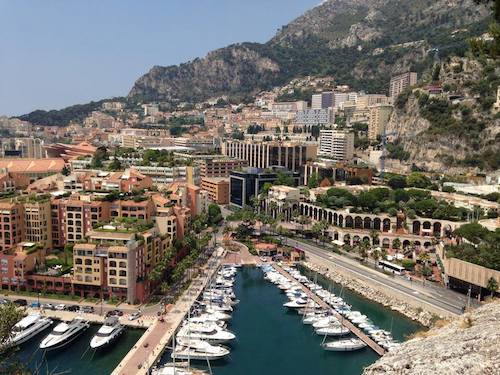 While we didn't eat when we were there (I'd packed us a picnic lunch--I love me some baguettes) I browsed several menus and was delighted to see how many establishments not only had vegetarian dishes, but marked them as vegetarian.

Finally, who knew the south of France had rocky beaches... literally? 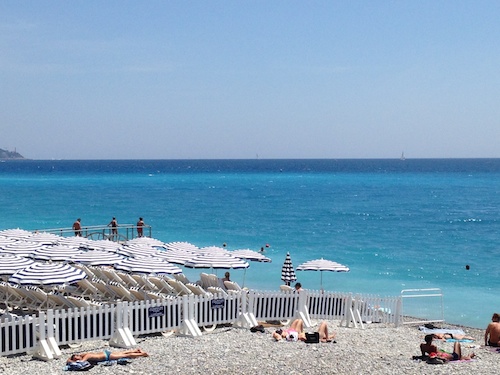 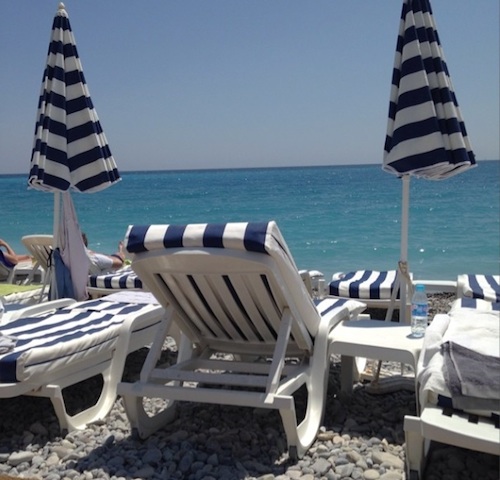 While other beaches in the area, such as Villefranche-sur-Mer have sand, it's still pretty rocky in this region. Perhaps that's why the water is sooo blue. The sand isn't mucking it up.

I've been to beaches all over Europe... the States... Hawaii.... I even lived in the Caribbean and I have never, ever, seen water this color of blue. It's brillant. Truly brillant.

...and if you're looking for French recipes see HH Abroad.