Another (Brief) Vegan Taste of Boston 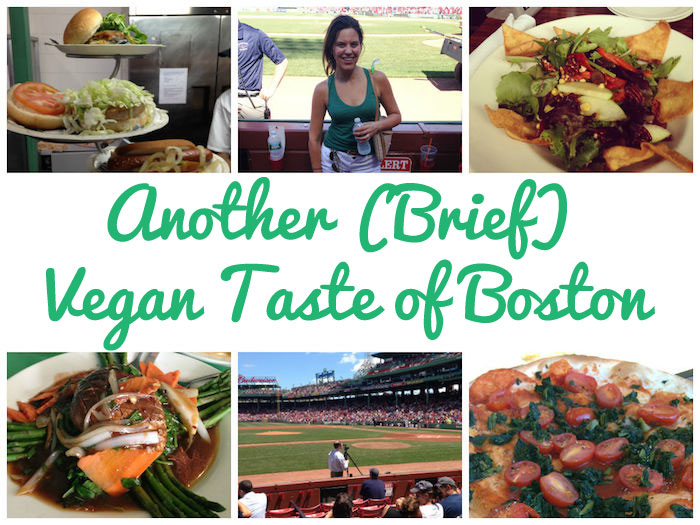 Last week we left for our summer abroad... stopping in one of our all-time favorite cities, Boston, along the way (Fun fact: Scott and I lived in Boston for about four years when I attended law school).

Boston is a beautiful city with a spirit and pride I can't quite describe. The people and culture are distinctively different, but in a way that's refreshing and honest.

I loved living in Boston, and although it isn't my home, not really -- I'm not from there, I have no family there, I did not grow up there... it feels a little like home. (Perhaps because I find I visit it more often than other places...) but I digress.

Boston is beautiful, with no shortage of history, culture, baseball, or things to do. You could walk around the city for hours and never tire of the experiences...

and now Boston is also its own little vegan mecca... quite a change from the city I left 7 years ago.

To give the city some credit, there were two vegetarian restaurants when I lived there, and a thriving veg society... but eating out was all kids of difficult in a very "meat and potatoes" and "seafood" proud town.

Little by little it got better, and by the time I left I had more than a dozen restaurants I could eat at (and by eat, I mean something more than an iceberg lettuce salad).

Each time I return I'm surprised to find still more options---and healthy ones at that. I also find the v-word is now widely understood in restaurants and shops. Everyone I came in contact with knew what "vegan" meant. I didn't have to spend 10 minutes explaining as I used to, and even better, no one laughed in my face or made fun of me!! It was totally normal, if not the tiniest bit trendy in a city where I never thought "vegan" could be socially acceptable. (A rich student body is surely the explanation... there are so many colleges and universities in Boston I could never name them all... or maybe the world just is getting its veggies together!!)

Our time in Boston was severely limited---two Red Sox games in 36 hours then out! 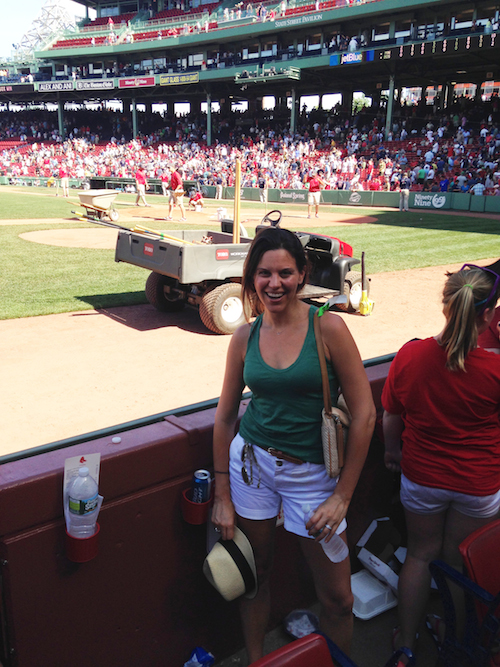 BUT I was able to still squeeze in a trip to my favorite Boston veg restaurant, Grasshopper. 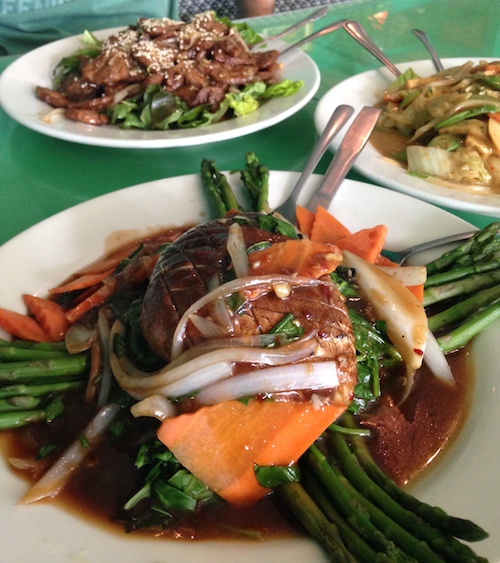 Grasshopper was one of the "original" vegan joints in town and still remains my favorite. There are plenty of other vegan places too, and over the course of a half dozen trips, I have been to nearly all of them (even some that are now closed). I've written about most of them in previous posts (read here, and here and here) if you need some additional reading :)

In the picture above is my dish---a never-goes-out-of-style special, the Family Supreme, which is just veggies (and they happily prepared it without oil at my request). It normally comes with eggplant too, but I don't "do" eggplant, so they hooked me up with extra asparagus!

The other plate is a curry noodle that my friend ordered, and a "beef" dish that Scott selected. I don't normally like fake meats, but have to say that beef one was pretty spectacular. As was the curry. My pal, Stephanie, ordered a sweet potato coconut noodle curry the previous visit that was also exceptional.

The signature favorite is called "No Name" and it's a sweet and sour gluten that, I admit, sounds nasty and looks a little odd, but I must admit is exceptional, if not a touch unhealthy ;)

They also have a vegan berry cheesecake that is out of this world. I'm not usually one for ordering rich desserts at restaurants, but when we moved away from Boston after graduation, the manager graciously gifted me a free slice of the cheesecake at my last meal. I had the hardest time sharing it with my friends and still think of it fondly!

I was also thrilled to see the vegan options were still at Fenway, and that more have been added to the line up! (That was a bad baseball pun.) 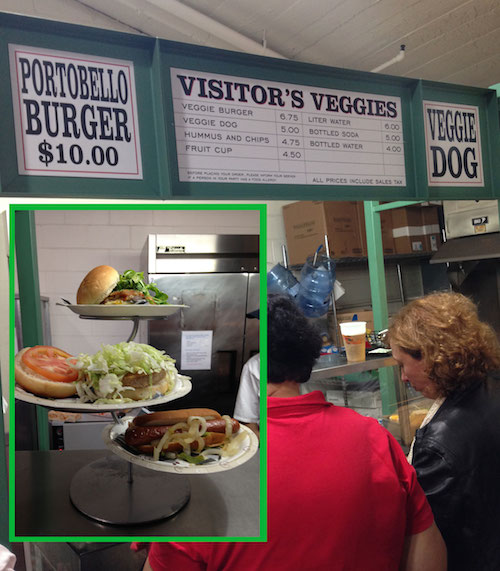 P.S. Most pro stadiums have vegan burgers or vegan hot dogs now, though they aren't at every concession. The only park I've been to that hasn't had them was the Yankee Stadium, and as a die hard Sox fan... I'll stop speaking now ;) You can visit Veggie Happy for a list, and also check out the huge resources section in my Guide for more info.

I ordered the fruit cup (yes, I'm lame but it was hot outside!) and Scott scored a vegan hot dog. I didn't take pictures, but you can see the hot dog in a previous post.

After the game we stopped at Boston Beer Works and had this great salad: 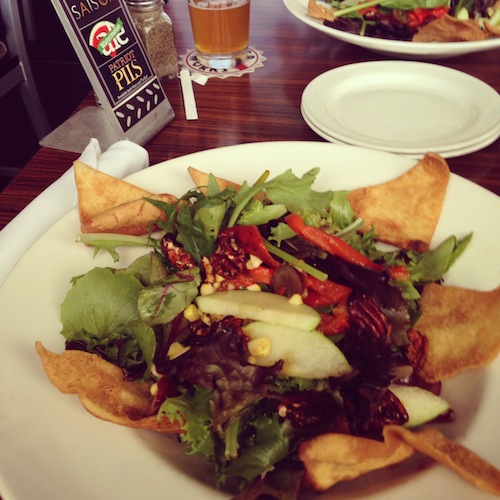 and then it was off to France.

We had a quick layover in Montreal and I was delighted to find this pizza in the terminal. I ordered it without cheese (sans fromage). Quite delicious with steamed spinach and baby tomatoes. I'd have never thought to put cooked spinach on my pizza, but I'll be doing that from now on. 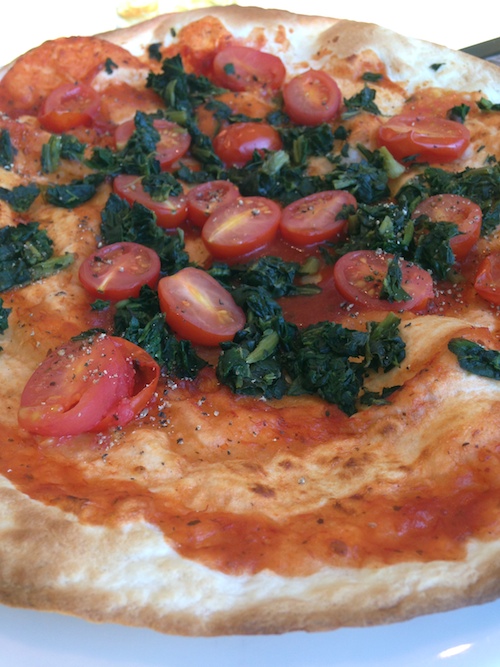 BTW -- we flew Air France. While they allegedly have a vegan entree option upon special request, they completely screwed up and didn't have the meal on board for us. (I think they gave it away to our neighbors across the aisle by accident, but didn't want to admit it). If you DO fly, ANY carrier, make sure you check the box for a vegan meal AND call ahead to confirm a few days before departure. (As this is not the first time this happened to us). You can find more information about traveling as a herbie in the Guide (also available in Audible format -- AND read by me!). Seriously, there is a ginormous chapter.

Thankfully I had packed enough fruit, HH muffins, and other snacks that Scott and I were fine. Buuuut a real reminder to always take precaution!