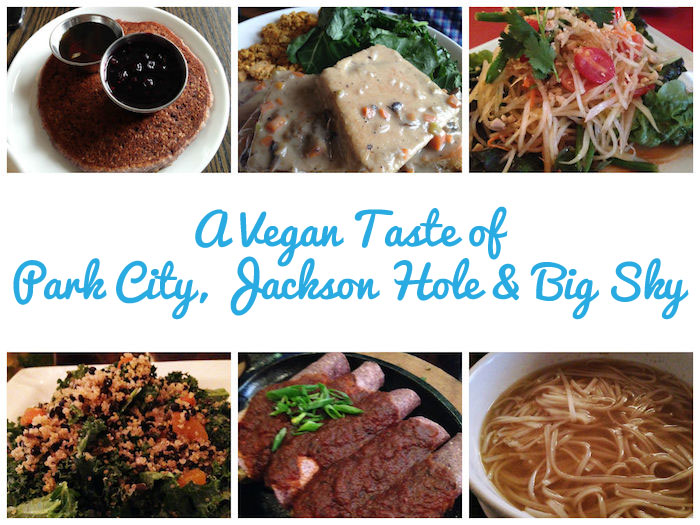 For the past three weeks, Scott & I have been on a snowboarding trip through Park City, Jackson Hole, and Montana.

Although we've been cooking most of our meals in our hotel room using my trusty pressure cooker (stay tuned for a future post on that with pics!), we do like to venture out from time to time and see what we can find!

We went to Park City first and had a helluva time eating out. I'm not saying there weren't any vegan or plant-based options. I'm sure there were. The problem was every restaurant was booked, had an hour wait, etc. We tried on three seperate occassions to dine out (but I lack patience when I'm hungry) and ultimately gave up trying. Our hotel had a small restaurant so we ordered salads a few times there to supplement all our in-room cooking. (We also had great success finding big, beautiful salads at the ski resorts. Most also had vegan burgers).

Park City does have a Whole Foods Market, however. 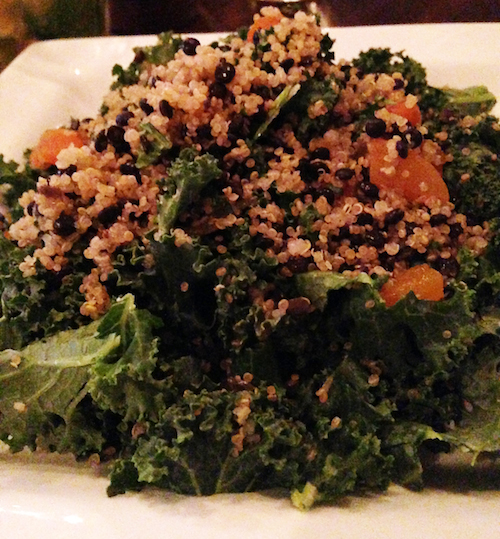 I'm most proud of this salad find!

Here's the story: I walked into a Roadhouse in Wyoming. The special of the day was bone marrow (I'm really not joking). I was sure this place would finally defeat me. Nope. They had an "Ebony & Ivory" salad on the menu that was not only plant-based, but oil-free. I nearly died. (And it was so delicious I went back the very next day!) Local raw greens, quinoa, lentils, dried apricots and cashews (I ordered it without cashews and the peanut dressing). Amazing!

Although their menu changes seasonally, our friendly waiter told me they always have a few vegetarian options and at least a vegan salad, if not other vegan-friendly dishes. (I was sad to hear we'd missed the vegan enchiladas the previous season). 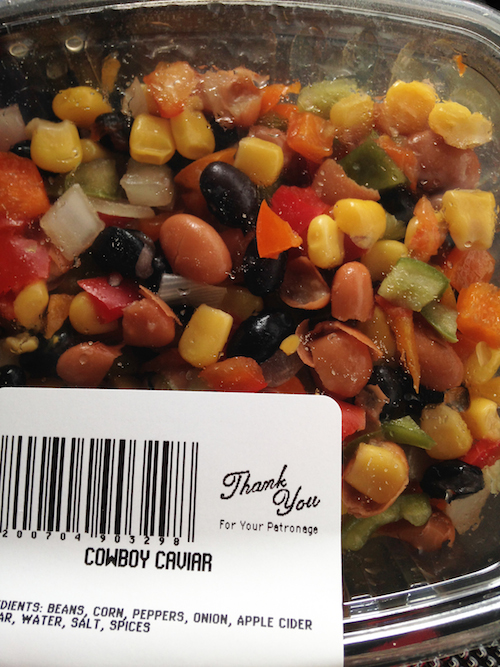 I also found this gem at a gas station in Wyoming. We'd been driving for over two hours (from Utah) and hadn't seen a single gas station, let alone a store or anything else. We had some food in the car, like rice cakes, but I wanted something a little more... fresh.

When we finally spotted a gas station, I was hopeful I'd find a banana. Or maybe an apple. I practically did a little dance move when I spotted this oil-free "Caviar."

It was delicious and I'm sorry I didn't buy more.

In Jackson, there's a wonderful vegan-friendly restaurant called the Lotus Cafe. Nearly every item on their menu can be made vegan. Although Scott and I generally avoid restaurant fare (well, except things like salads, veg sushi, and other things we know we can get oil-free), we decided to splurge and see how the vegan food was. 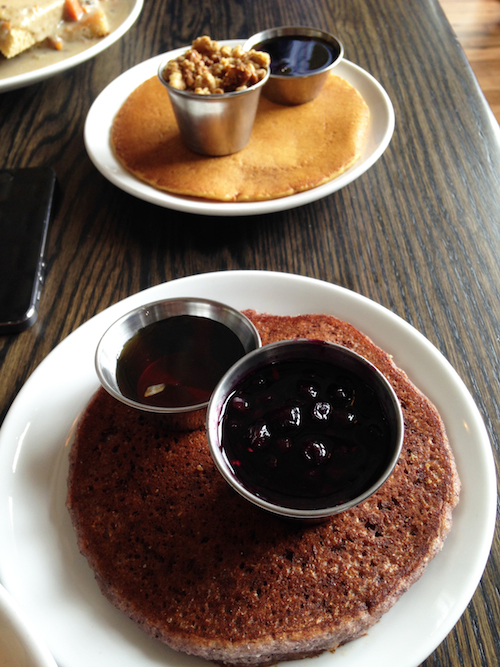 They offer all kinds of different pancakes, so we ordered two samplers. I couldn't tell you what they were except exceptional (but too oily). 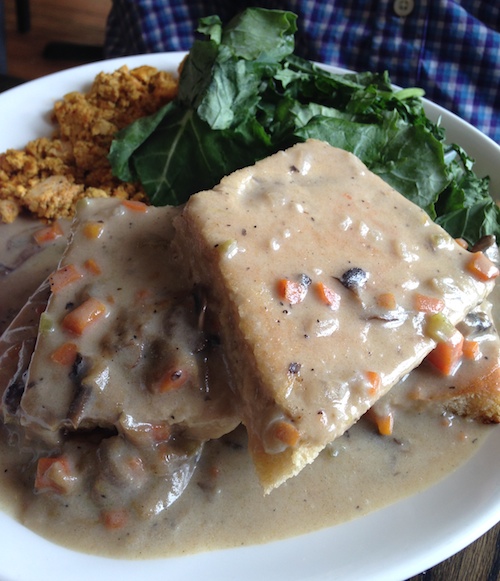 Scott, being Southern, also couldn't pass up ordering the biscuits and gravy (served with steamed kale and Tofu Scramble). 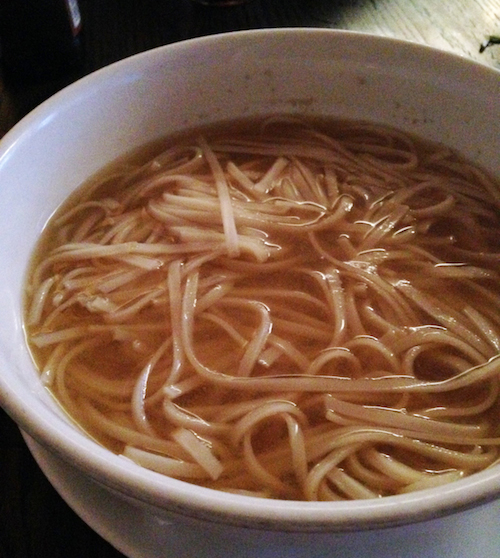 I ordered the vegan Pho. I'd never had (or heard of) Pho until I was plant-based, and by then it was too late to try it since even vegetable Pho is made with a bone-broth.

As soon as I saw vegan Pho on the menu at Lotus Cafe, I knew I had to get it. I had to see what all the fuss was about. Why are my friends so bonkers for it? OMG. I get it now. Absolutely delicious. (It came with veggies and sprouts that didn't make the picture). If they used oil in this dish, I couldn't detect it at all. 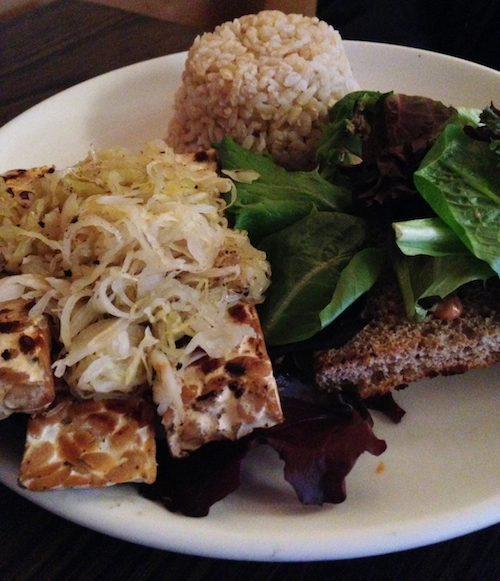 We also stopped at Lotus Cafe on our way out of town to grab lunch.

Next we traveled to Big Sky, MT.

It was snowing when we arrived and after we checked in, the snow was really coming down. I've never seen anything like it. I was already a little timid to venture out in those conditions, but we needed to get groceries for dinner. Then we saw a car flipped over on its side. I gave up -- safety first!

I was doubtful the hotel restaurant would have much to offer us, but hoped for a salad and a baked potato. If nothing else, I knew I had rice and hot sauce back in my room. Surely we could make something work? 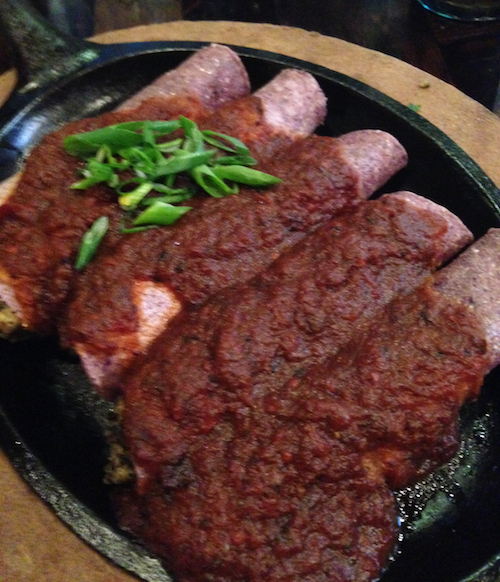 The special of the day was a black bean, quinoa and avocado blue corn tortilla enchilada. I must've blinked five times reading the board.

"Is this vegan?" I asked the waitress and she said... "If you don't get the cheese on top and sour cream on the side. I had it for lunch. It was amazing." She checked with the kitchen to double confirm it was vegan (I kindly explained my dairy-allergy), and we ordered it to share, along with two big salads.

Talk about filling! All those beans and quinoa pack a punch, but it was great. Our sweet waitress said they also did a vegan quinoa and bean burger sometimes, so we've been on the lookout for that special!

Finally, Monday was our wedding anniversary so Scott and I made reservations at the Thai restaurant in town to treat ourselves. 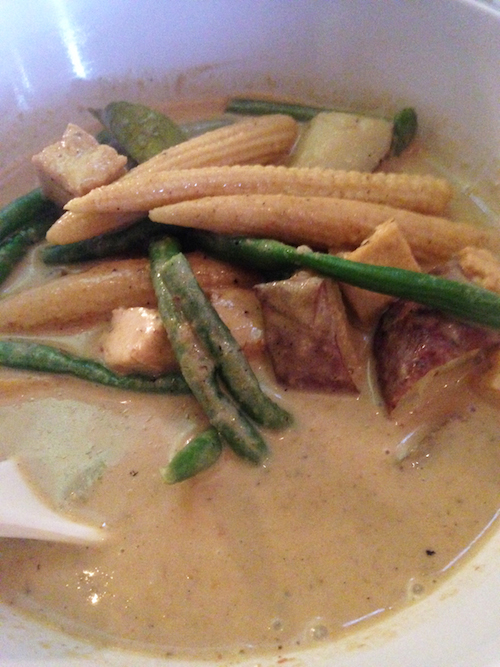 Scott ordered the yellow curry, which was exceptional. I kept sneaking bites of the potatoes and green beans. 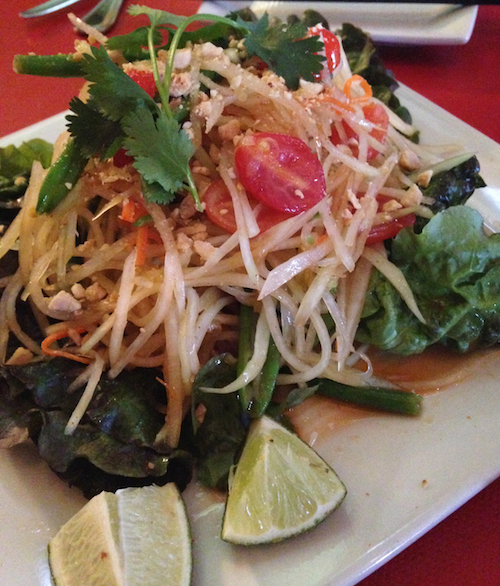 Meanwhile I ordered the papaya salad that was out of this world. If you ever find yourself in this restaurant, have them scale back on the heat because even the mild is explosive (and I like heat).

We were also able to find many of our travel standbys like vegetable sushi, steamed vegetables and rice, beans and rice, vegetable sandwiches, cheeseless veggie pizza, and gorgeous salads everywhere -- the ski resorts had plenty of options, too! (I'm going to do another post on my travel standbys stay tuned!) I am so happy to see how the food landscape is changing. I expected Wyoming to be tough, but was pleased to see how vegan and vegetarian-friendly the state was.

For snowboarders and skiers:

Big Sky wins no contest. Some of the best snowboarding of my life. (I've riden in Canada, all over the United States, and Europe).

In Park City: I liked Snowbird, Scott liked Snowbasin. Neither of us cared for Park City.

Every resort had plenty of options -- both vegan (i.e. fries and veggie burgers) as well as healthy, WFPBNO (plant-based/no-oil options).

This was our first year where we went to most places instead of staying in one spot all winter. (Last winter it was Tahoe, the winter before Steamboat Springs, Colorado). It was nice to have a sampling, but my, how we loved Montana.

And the moose in Wyoming: 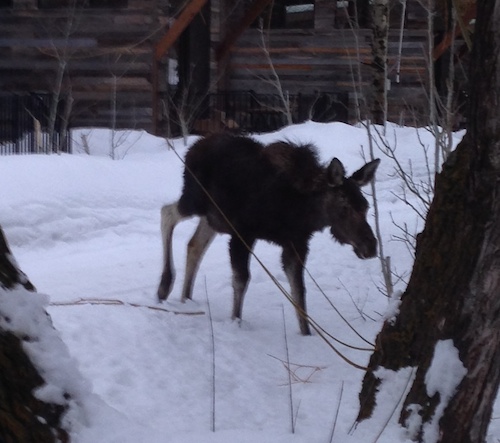