Herbies of the Week: Sherry & Kerry (They've Lost Over 250lbs Together!) 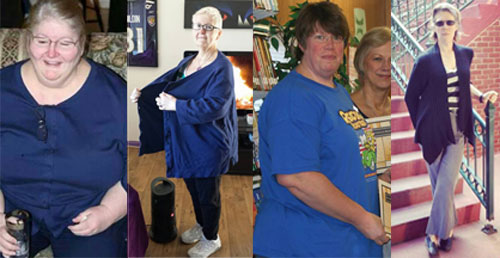 Meet our Herbies of the Week: Sherry & Kerry!

Last month I asked on Facebook, "Did switching to a plant-based diet change your life?", and Sherry was one of the many people who replied -- and I'm SO happy she did!

After suffering a lacunar stroke at 52 years old, Sherry and her wife Kerry promised each other they would never go back to the unhealthy lifestyle they were living. At first they tried a plant-based diet as an "experiment", but once they experienced the many benefits (which included Sherry reversing her T2 diabetes), it became their way of life!

Oh, and did I mention they've lost a combined total of nearly 275lbs!?

Here's Sherry & Kerry's story in their own words... 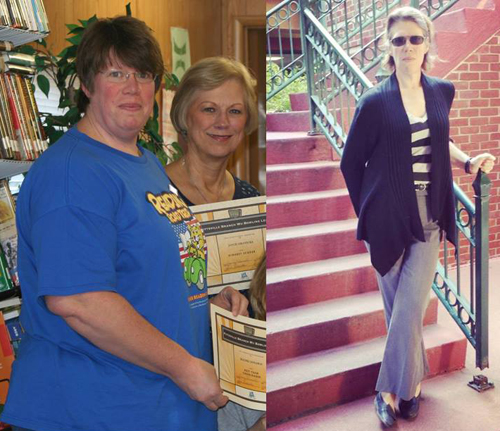 Our story truly begins on January 21, 2012 when I suffered a small lacunar stroke in the right thalamus of my brain. I was 52 years old and my partner Kerry (now wife) was 49. I had also been diagnosed with Multiple Sclerosis in 1998, but other than having MS I had always assumed I was healthy despite weighing almost 300 pounds. Denial is a tricky head game. When I was admitted to the hospital the night of my stroke, my blood sugar was in the 400 range and my blood pressure was 200/150. They told me the stroke was a direct result of lifestyle diseases: undiagnosed high blood pressure and Type II Diabetes. They said I would have to immediately go on medications to correct this, and that I would be on them for the rest of my life. They did not mention correcting my diet; they did not mention how to make changes. The day I was released from the hospital I was handed a pamphlet on diabetes and stroke and was sent home with a bag full of pills and a lot of fear and uncertainty.

In years past I had dabbled with vegetarianism, going in and out of it as my mood suited. Kerry had consistently been a vegetarian since the 80’s but would cook meat for me when I desired. Ironically when I had the stroke I was in the middle of my dinner, which consisted of Long John Silver's fried fish. That evening, after I was checked into my room, Kerry went home and threw out everything in our kitchen that was “bad” food. Terrified and confused, she felt like she had contributed to this happening. We had enabled each other over the years. When one would mention that we should lose weight and try to get healthy, the other would say “let’s get a pizza” and off we would go. The night of the stroke she also weighed well over 300 pounds herself and was probably suffering from the same lifestyle diseases that had just struck me.

After my three day hospital stay we made an oath to each other that no matter what, we would never go back to the unhealthy lifestyle that we were living. The first step was to lose weight. At first we subsisted on salads and I was still eating chicken and fish. We began losing weight of course, but our meals were pretty boring and I felt in my heart that I wanted to stop eating the meat. Back in the 90’s we managed to spend one week as vegans. We tried it and felt great, but determined we could never live without our cheese and so we did not stick with it. A few other times over the years we would mention trying it again but it always ended with us bemoaning the loss of our cheese, or our yogurt. We then began doing some research into factory farming and the effects of dairy on health. We read a lot of the current literature on it, beginning with books by Dr. Campbell and Dr. Esselstyn. We watched Forks over Knives and Vegucated, and began to once again consider that a plant based lifestyle would be perfect for us. This could be what we needed to turn our health around and correct the damage done by a steady diet of animal products and sugar.

Our journey into a plant-based diet began as an experiment. We said we would try it out, no pressure, and see if it would work for us. We didn’t give it a lot of hope based on our past experience. Then a friend recommended the Happy Herbivore book series and we were able to get them all from the library. We fell in love with the ease of the recipes and how the ingredients were ones that we could obtain at any grocery store. Not living in a large urban area it is not always easy to find different ingredients. We were surprised how we could add healthy sweets back into our diet for our “treat nights” which are every Sunday (We adore the chocolate chip scone recipe in HHC. We live for our scones!). 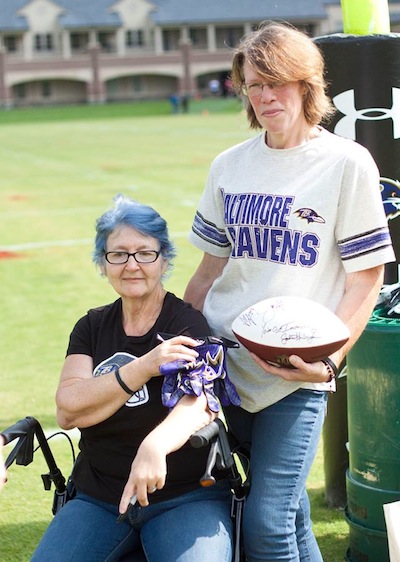 Over the course of the two years, subsequent visits to my physician were met with shock at how well I was doing. I was losing weight in a healthy but steady manner and my blood glucose levels were dropping rapidly. My blood pressure was lowering to the point where we had to constantly reduce my medication levels to keep my blood pressure from dropping too low. I was still testing my blood sugar daily and at one point the doctor finally said “You are not considered diabetic anymore” and I was removed from the medication for blood sugar control. Eventually over time I would be removed from all medications (except for an aspirin therapy med) and the doctor stated that “you are the poster child for turning your health around with diet and exercise”. During the past two years my primary exercise has been riding my three wheeled bike and walking. I do it faithfully. I love being able to get outside and move, something I was unable to do in the past as I was basically housebound.

One of the things that kept us motivated these past two years was our love of our football team the Baltimore Ravens. In fact, the year that our team suffered a heartbreaking loss in the playoffs to the New England Patriots, I was watching from the hospital bed after the stroke. I had always wanted to go to games but in the past I never felt well enough to do so. Now that I was getting healthier and feeling better we were able to make the two hour trip to see some of the games and meet some of the players. I often use phrases that Coach Harbaugh would tell his team to keep myself motivated each day. I used these motivational sayings to get up, move and eat healthy. One of the phrases he uses is “Stacking Days”. Stacking Days means that each day you work to improve a little bit, and then the next day you work to improve a little bit more, and eventually when you stack all these little improvements on top of each other you have a complete success. You stack days until you are the best you that you can be. I was indeed stacking days and getting better and healthier all the time.

In August of 2013, Kerry wrote to Coach Harbaugh to tell him my story and thank him and the team for being an inspiration to me. She sent the email off and never thought anything more about it. Surprisingly we were contacted back by the Ravens organization in September and were invited to the training facility in Owings Mills to watch the team practice. We went on September 27th and we were greeted by a representative, given a tour of the facility and welcomed by the team and coach. They all gathered around us and hugged us and shook our hands and Coach told me that he had read my story to the team and that I was THEIR inspiration. It was an exciting day, one that had culminated from two years of hard work, change and determination. [Editorial note: You canwatch a video of Sherry & Kerry's visit here.] We often say that our journey was not unlike our teams which began in January 2012 with a crushing defeat (stroke on my part…loss on theirs) to a battle for our health for us, and an eventual Superbowl win for our team. 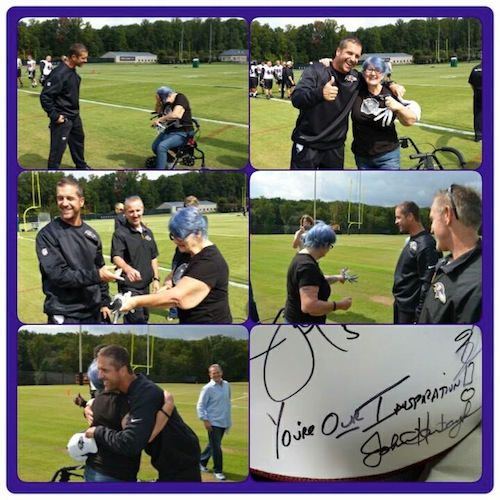 My doctors are aware that I am a vegan. We have not gotten any negative response from this and have basically been told to keep doing what we are doing. Kerry and I do this together and keep each other strong and focused. Some of our friends are amazed at the variety of foods that we can eat and how we can make things from scratch without dairy, although sometimes they are skeptical that we are making delicious deserts without milk, eggs, or butter. They are supportive but we still get a lot of “I could never go without milk” or “How do you get your protein?” comments, but we have learned how to respond in a way that educates rather than retaliates. Many friends have become inspired by our journey and have taken steps to change their eating habits and work on losing weight. The switch to a plant-based diet was oddly very easy for us this time. Perhaps it was the scare of the health crisis and the desire to never go back to that lifestyle, but we have committed to this for life now.

The cookbooks have been a blessing and have made the journey so much easier. We find we enjoy our food like never before. We are discovering new tastes and trying new flavors and appreciating what we put in our bodies so much more. We cook all of our foods from scratch now, where before we ate fast food most nights. We know everything that is in our food and where it came from. We feel good in the knowledge that we are doing our best to not contribute in any way to the cruelty inflicted on other living beings and we are healthier then we have ever been in our lives.

Kerry is the branch manager of a small rural library, and she and her co-worker who recommended HH are planning on teaching a class on plant-based eating with demonstrations and education. She will be displaying the books for the program and is hoping to get enough in her budget to be able to let people use them for the duration. We are still a work in progress, but we are on our way and we are enjoying the journey. To date we have lost a combined total of 274 pounds, with 134 of them belonging to me. My most recent blood pressure reading is 104/60.

Wow! What an incredible story! Thank you so much Sherry & Kerry for sharing! You are both an inspiration!