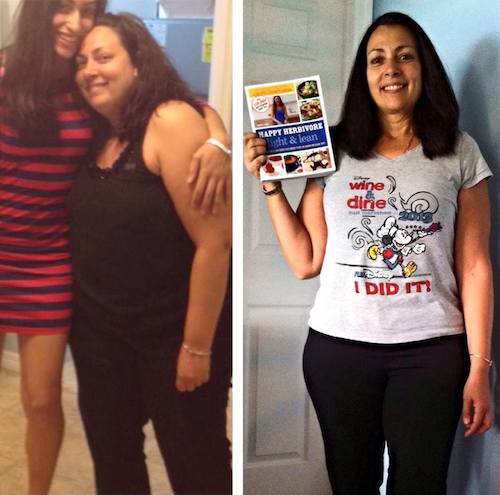 Meet our Herbie of the Week: Jacqueline!

Before the holidays, Jacqueline posted a before and after picture (below) on the Happy Herbivore Facebook page for the Win A Visit Sweepstakes.

I believe my exact words were: O.M.G.!!!!! I was CRAZY impressed (how could anyone not!?), so I immediately asked her if she would share her story for the Herbie of the Week series.

Prepare to be amazed!

A little over a year ago I told myself enough is enough. I was 270 lbs, the biggest I've ever been. I could barely walk. I would get winded and exhausted very quickly. My knees had gotten so bad I could not sit down or get up without assistance, never mind attempting stairs of any kind. Supposedly, per my doctor, I was in good health. WHAT! Something's not right. I didn't have a life threatening illness, but who's kidding who? Obesity should be taken more seriously and I wish my doctor had said something to me before I got so out of control. If I knew what I know now I would have thought twice before packing on the pounds.

Even with all the limitations I had I still did nothing to fix it. I would try and fail over and over again. I just kept telling myself it's just too hard, until my daughter ran in her first 1/2 marathon. It was Disney's Wine and Dine 1/2 marathon a year ago. Everyone was having a blast and all I could do was sit on the sideline. I am a huge Disney fan and I was so jealous I wasn't running in it. This was my turning point. I found something I was determined to do and this is where my journey began. I told everyone I will be running in this race next year so be ready.

How was I going to change my life? Where do I start? Who can I turn to? I had so many questions my head was spinning. I started to walk as often as I could until I could start jogging and eventually running in 5K races. This was not without a lot of pain, but as I started to lose the weight, my knees would start feeling better. While I was doing that I started to watch Dr Oz. I never missed an episode. The things I tried from the show helped me get started, but I wasn't seeing the results I wanted until I saw an episode with Dr. Joel Fuhrman. I immediately bought his Eat to Live book. This is when I decided to eat a vegan diet. From that moment on I started reading every book I could find to help in my journey, but to my surprise it wouldn't be a book or even a TV show that would change my life, it was a single post on Facebook a friend shared, a page called "Happy Herbivore". What is this? Is this something I need to look into? WOW it sure was and now I can say I eat a plant-based diet. Something I knew so little about and learned so much through Happy Herbivore.

I started out with the meal plans and eventually bought all the cookbooks. The pounds were coming off with so little effort and enjoying every bite I took. I was losing the weight and gaining more time, money and energy to do the things I love. My knees were getting better and I was able to run longer distances. I started surfing, which was a life long dream of mine. In addition to all the 5Ks I was running locally, I ran in two Disney races "Expedition Everest Challenge 5K with obstacles and scavenger hunt" and "Twilight Tower of Terror 10 Miler" before eventually running in my goal race the "Wine and Dine 1/2 marathon" one year later as promised. 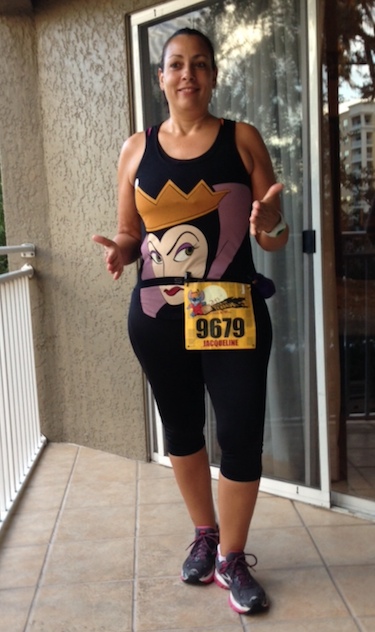 I've lost 105 lbs so far. My journey is not over yet. But thanks to my determination, my new found love for life and everything in it and "Happy Herbivore" I am on my way to being the healthiest I can be and it feels great!

Thank you for all you do. I can only inspire to do what you have done and help people like you do everyday.

Way to go Jacqueline! Thank you SO much for sharing your inspirational story with us!