Herbies of the Week: Judith & Fran 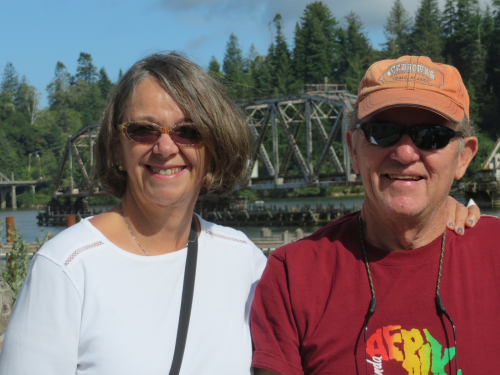 Meet 2014's first Herbies of the Week: Judith and Fran!

Purely motivated by weight loss, the two went plant-based after discovering "The Starch Solution" by Dr. McDougall and haven't looked back! Not only have they lost a combined 80lbs (WOW!), they also lowered their cholesterol, and Fran is now off half of his blood pressure and heart medications.

It just goes to show you, it's never too late to change your life!

I am Judith and my husband Fran and I have been plant based for almost a year. While on a 30 day road trip visiting National parks in Utah, Arizona, California and Oregon we read "The Starch Solution" by Dr. John McDougall. We took a leap and decided, "Well, we could TRY it." I thought we'd have to wait until we got home to start, but after grabbing a few potatoes to cook in the requisite motel microwave, we started this crazy journey. A week or so into it, I emailed home and suggested our omnivore friends who were staying at our place should eat the flank steak in the freezer.

Our motivation for this food plan was purely to lose weight. At that point, I didn't look farther than the scale to care about other possible benefits, it was all about losing weight. Having been on almost every diet in the world since age 12 or so, I didn't have a lot of faith in this one either. Obese read my medical records when I was scheduled for a total knee replacement. "Obese? Who me?" I was just overweight I thought. Looking around, I didn't think I was that much bigger than so many others, and I was healthy pretty much, no meds. OK, so I was pre-diabetic, but my blood pressure was alright. Fran, though, was on blood pressure meds as well as heart meds after having a stent put in his heart a few years earlier, and he was always wanting to lose weight to give himself a better life. His medical records refer to him as a "well nourished" male. Men doctors! 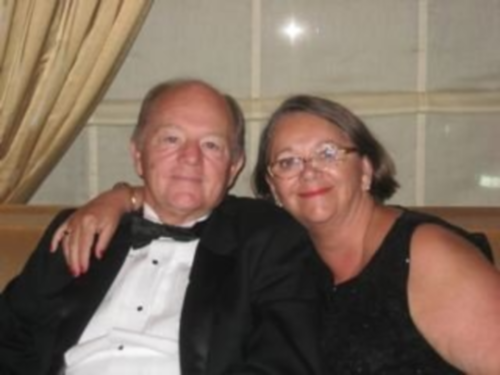 Our friends at home asked about eating the breaded and ready to fry razor clams in the freezer and my reply sums up where I was at that time. "Don't touch those clams because if I get home and haven't lost any weight, they are going to be the FIRST thing I cook." Well holy Batman and Robin, I had lost ten pounds once our trip was done and I was ecstatic! As we continued to read more books like The China Study and Forks Over Knives, and download more of Lindsay's cookbooks and give them as gifts, the weeks and months flew by with my losing about a pound a week some weeks and not some other weeks. More important, I quickly figured out what all those other people were talking about when they said: "It's not a diet, it is a lifestyle change."

Besides losing weight, I had lost the start up pain in the morning upon waking and I had more energy, and a growing belief that if we could change the way we ate and feel this good, then other changes were possible too. I got sharper mentally too, finally winning more "Words With Friends" than before. Closets got cleaned of old, too big clothes and we started shopping almost exclusively at Goodwill for clothes since we weren't sure what size we'd be eventually. 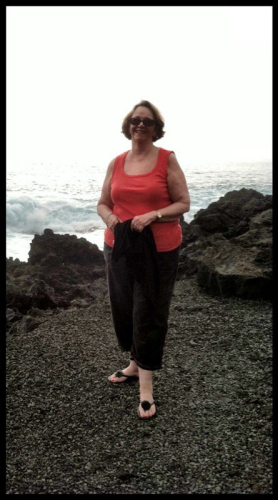 Purging cookbooks was another eye opener since we donated all of the previous miracles (not!), like Atkins, South Beach, Oprah's, Weight Watchers etc. Minimalist Monday was an inspiration and having the cookbooks on my phone and iPad made shopping and planning easier. I had always been a good cook, but learning to cook in this way was a new experience. I didn't think mushrooms could be sauteed without butter for heavens sake, but lo and behold, they can, they were and they tasted great! I was learning a new vocabulary with things that I had never purchased in a grocery store, like nutritional yeast and wheat gluten. Wowee! Fran was and continues to be a good sport about every dinner and new recipe. Not that he loves them all, but he didn't like curry before, so replacing the chicken with tofu isn't going to change that. We still love sushi, fried (without oil) rice, cheater satay with peanut sauce and hundreds more. It was helpful early on to not try to eat fake meat or even make meatloaf. We did that after a few months, but to start, we made chili, red beans & rice, lentil tacos, Yakisoba with Soy Yaki from Trader Joe's. 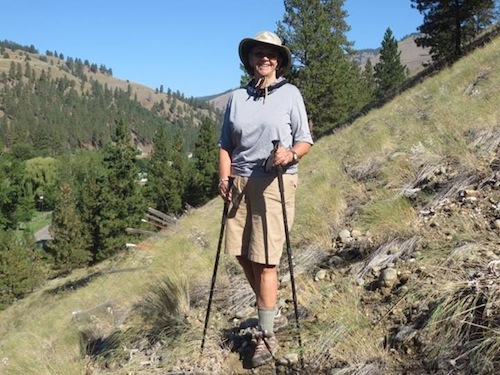 We are retired now and both love to travel, and friends who are not plant based always ask how we did while we were away with the eating. We had some challenges on a cruise when it came to the formal dining room, but the buffet was much easier. The adventurous spirit that comes with making these monumental shifts to our life enabled us to say yes to going on a mission trip to Africa in July. We traveled to Uganda and Kenya for three weeks where we visited schools, orphanages and villages and met students who are being sponsored by our church. We were pretty sure that we'd be challenged by possible malaria and sketchy bathroom facilities, and we were, but we sailed right past any real problems with food. In Uganda I thought of "The Starch Solution" when we had a dish called matooke morning, noon and night. It was a starch dish made of bananas. Sometimes there was a mild peanut sauce served with the matooke and my personal favorite were some beans called Cowpeas. Yum! I think here they are grown as a cover crop, not for food, but we're missing out. They looked a little like lentils. 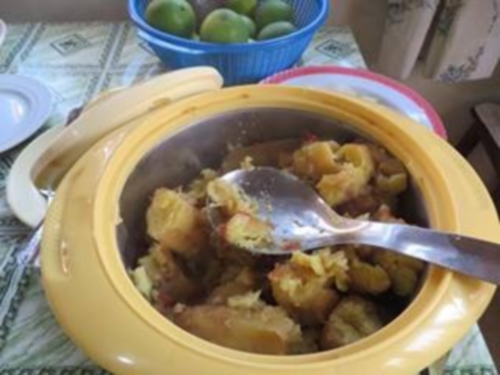 We kept Lindsay's saying in mind, "progress, not perfection"! On a car trip from heck, Fran's face lit up like gangbusters when Sister Justine came back to the car with African potato chips. Was it a gift from heaven? Maybe...for that day. Fran doesn't love ALL potato chips and I don't love ALL chocolate, but those two things are still a challenge. Certainly it was easier to forget about potato chips or chocolate chip cookies when we were staying in a convent without mirrors and not too much hot water, or in a home with a latrine versus a toilet. During those times, we were thrilled to grab a handful of roasted in the sun ground nuts, certain that a filling dish of matooke steamed in banana leaves would be at the next meal. I did notice that since fruit was served after the meal, it took the place of a dessert and now that we're back home, we usually have fruit as dessert as well.

So far I have lost over 40lbs and am no longer in the capital "O" for obese club. I am still in the lower case "o" for overweight class. My blood glucose is 92, down from 107 and my total cholesterol is 161, down from 206. Fran has lost over 30lbs and his total cholesterol is 89! His doctors have taken him off three of the previous six meds he was on. We would like to lose more weight and if we do that will be fine, but this is not a diet, it's just the way we live now, so I think our bodies will find what is the healthy weight without my having to have a set number on a scale or in my head. 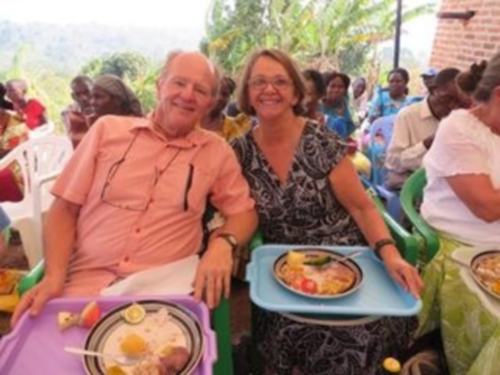 We are on the road again one year after our plant based journey began, this time visiting Glacier, Yellowstone, Grand Tetons, Death Valley and the Kings Canyon. We upped our ride from last year to a small RV so we carry our fridge with us now. The freezer is filled with some berries, some rice, some beans. When we can, we stop at farmers markets to pick up some local bounty like peaches, eggplant, swiss chard. With HH cookbooks on my phone, it's an easy way to live and leaves us more money for gas! That's our story! Oh yeah, forgot to mention that Fran turned 71 this year, I am pushing 65 and we celebrated our 43rd wedding anniversary in August.

I believe that it is rarely too late to make better choices. People always say, "life is too short, but what if it isn't? What if life is long? Let's be healthy all the way to the end!

I couldn't agree with you more! Thanks for sharing your INCREDIBLE story! 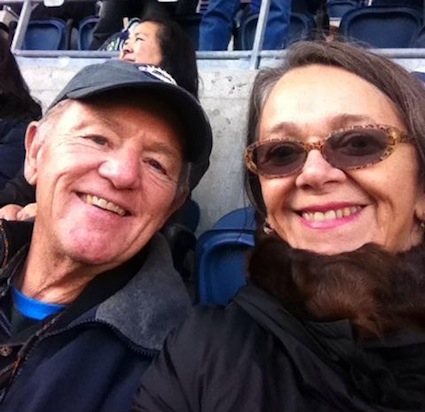 We are doing great. A recent checkup at my docs showed that since last March (2013), I had lost 19lbs and my BMI is now right at normal! My total weight loss is almost 50lbs and Fran's size 34 jeans are pretty cool too! He has lost a total of 35lbs. We feel great being plant based. The weight loss is a super by-product of eating, but it's the waking up everyday feeling good and having great energy that is the real payoff for us. We recently started using the meal plans and that has been fun. There is always an adventure going on in our kitchen!