A Vegan Taste of Switzerland (and Belgium) -- pics from my trip! 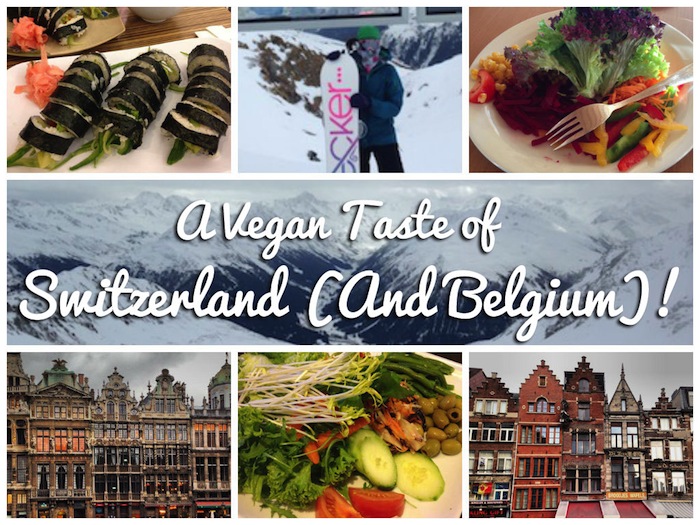 As you may know from Facebook, I've been on holiday in Europe for the past week or so. I've been sharing some pics there, but here's a good wrap-up post of my trip so far (I'll do another part 2 post once I'm back in the States).

After almost 24 hours of travel time (a 13-hour flight, a 4-hour train ride (and almost 12 hour time difference) I made it to Switzerland on Wednesday (Dec. 18).

On my way to Switzerland, I had to change planes in Newark, where I had, no joke, some of the best brown rice vegetable sushi of my life. (I later read Newark was ranked #1 as healthiest airport... and if my sushi was any indication...) 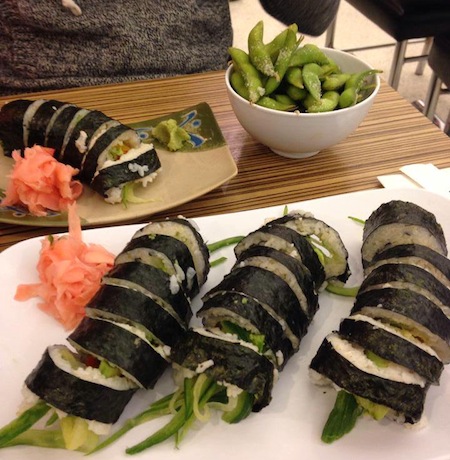 I hit the slopes in Davos, Switzerland for the first time on Thursday and it was glorious. I spent all of last winter in Tahoe (Tahoe part 1, part 2), and the entire winter before that in Steamboat Springs, Colorado, and I think (even if I didn't know it at the time) that those two winters were just getting me ready for this winter Switzerland. I love it here! (and I'm *really* glad I waited until my skills were advancedbefore coming).

Being here has also reminded me (time and time again) of my recent MM post: Slow Down (I Need To Take a Breath, Stop The Race).

While waiting for a bus, I made a Flemish friend. I'm really not exaggerating here but, 5 minutes into our conversation, when he learned I was American, he made a point to distinguish how much slower Europeans are in that they take their time. "They're not in a big rush" as it were. My new friend then told me about his sister who lives in Boston (I went to law school in Boston) and how much she has to work, work at night, and always check her emails, and how she never gets vacation.

I tried not to make a facial expression that would give me away... "Hi, I'm Lindsay. I am a workaholic and have OCD and have been in therapy for several years now trying to um... be more European."

When Scott asked him how long it took to drive from Belgium TO Switzerland, he said "well an American, about 5 to 6 hours. But, well, I'm European so I took more time. I stopped in Salzberg for a beer...." (you get the picture).

After we parted, I said to Scott..."What is with me and this cliche?" (See my essay about "Finding Myself" in Happy Herbivore Abroad).

I came To Europe (I'm here for a while) to "work on" my work-life balance. The writing must've been written all over my face. It was just too uncanny that I had THAT conversation my first day here.

The good news: I am working less, and it's weird, but right. (I think it helps that I'm almost 12-hours ahead of home, so I sort of am forced to work less).

Anyway enough about my spiritual journey with my workaholic issues!

Here are some pics I took from the slopes. This is at the top of a lift at Jakobshorn. If you squint you can see the left, to give you some perspective. 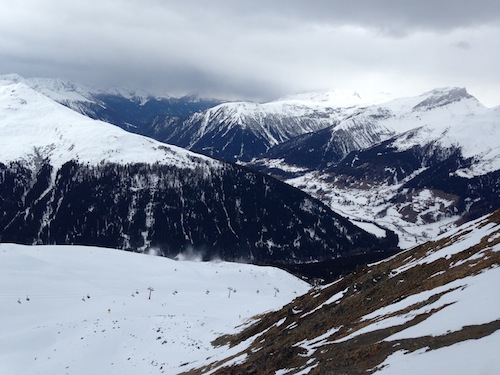 It started snowing after I took these pics! 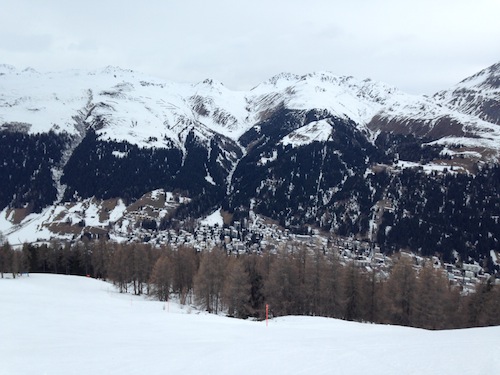 This is halfway down. To put things in perspective (again) -- all those buildings are 4-6 stories tall. 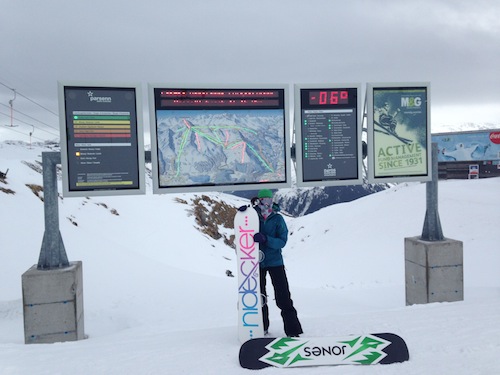 Here I am at Pearson (a nearby ski area to Jakobshorn). 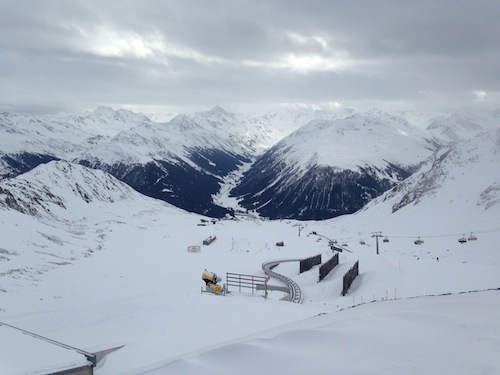 Now let's talk food (what you've been waiting for!)

From the moment I left, I've been getting a lot of tweets/emails and Facebook comments "what are you eating" ;)

I'll spoil the rest of the story: it's the same as at home, or anywhere I travel in the world: whole, plant foods. Just look at this grocery store in Switzerland: I'm not starving! (I was in a smaller town, by the way -- not a big city). 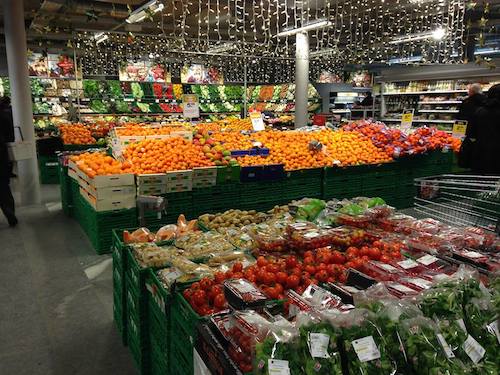 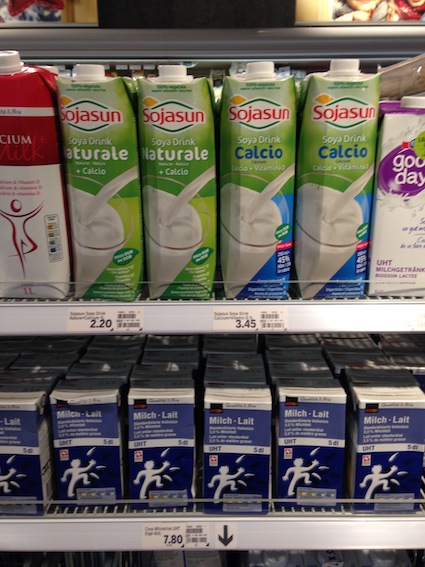 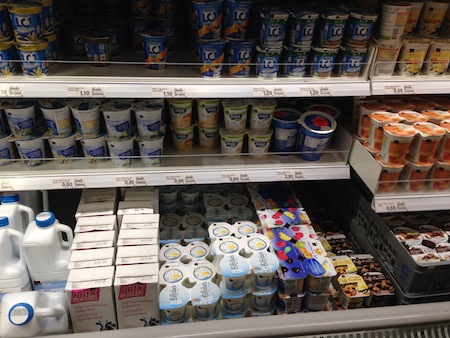 For the most part, Scott & I pack food for travel (i.e. long plane flight), and for those tired times when we don't feel like going out (see picture below of our packed food) but we also grab a few meals on the go. 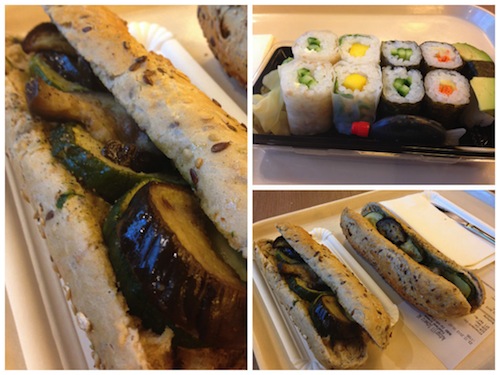 Vegetable sushi (for me, clearly I have a travel favorite) and 2 grilled vegetable sandwiches on hearty bread (for Scott). Both were oil-free too! Scott's sandwich was even marled "vegan" and my sushi was labeled "vegi" on the menu.
(At Zurich airport) 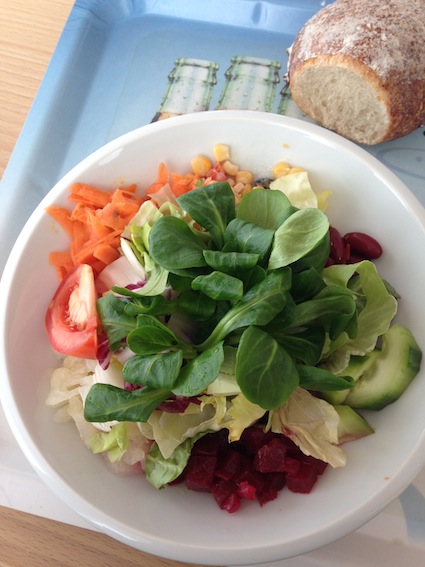 Salad at the ski lodge in Switzerland. I'm crazy impressed. It's rare I can find a salad at a U.S. ski resort and when I do, it's typically a bowl of dried out iceberge lettuce with a slice of pink, almost white, "tomato." Bleh!

As such, I typically pack food to take to eat AT the lodge, but when we saw these salads, Scott and I really couldn't resist! They were also very affordable!! 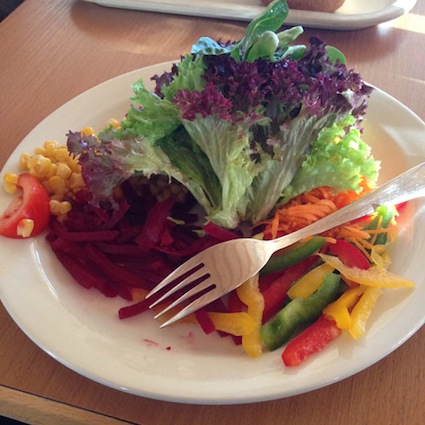 Most hotels (and even hostels) include a free breakfast. Although "breakfast" tends to be a big meat fest, I always have luck finding somethingto eat. (I write more about this in my travel ebook, Broke Backpacker).

Here's the meal I made every morning in Switzerland: 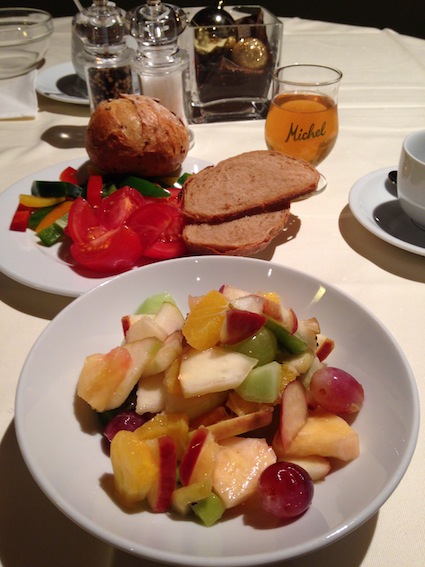 (That's kombucha in the little glass. It's really popular in Europe, apparently).

Speaking of Finland, you can see how well I did at making a breakfast there, too (see my Finland vegan food post).

After about a week in Switzerland, Scott and I left to see some of our other favorite cities in Europe. For now, here's some shots from Brussels, Belgium! 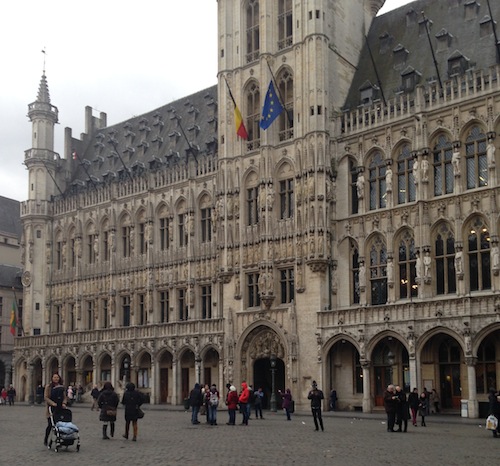 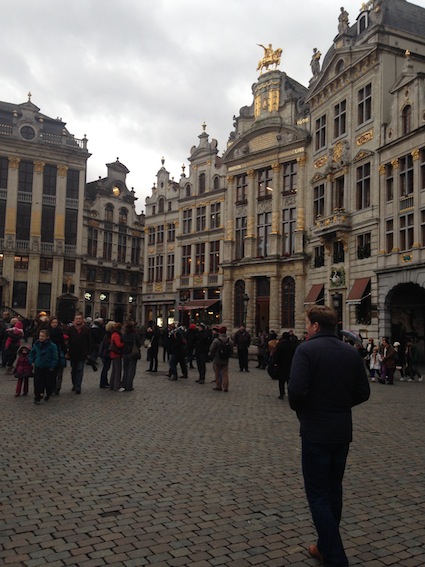 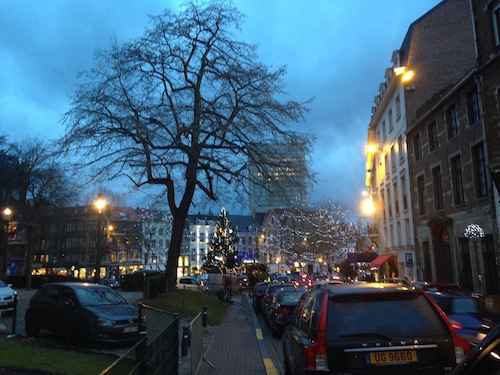 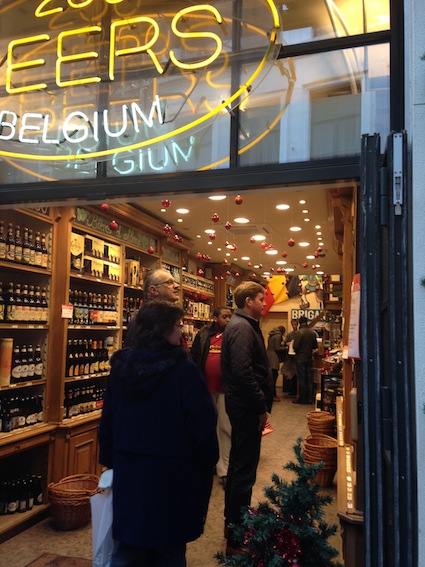 I looked for chocolate and well... Scott's priorities ;)

Oh! almost forgot! We dipped into a bar (in Brussels) that had one of Scott's favorite beers on tap. (He wanted to drink it "fresh" in it's home country, I guess, to compare back to the bottled version back home). A little nervous to have a fairly high alcohol beer on an empty stomach, I ordered a salad, once again expecting the sad little iceberg lettuce pile I typically get in most American bars.... AND I GOT THIS: 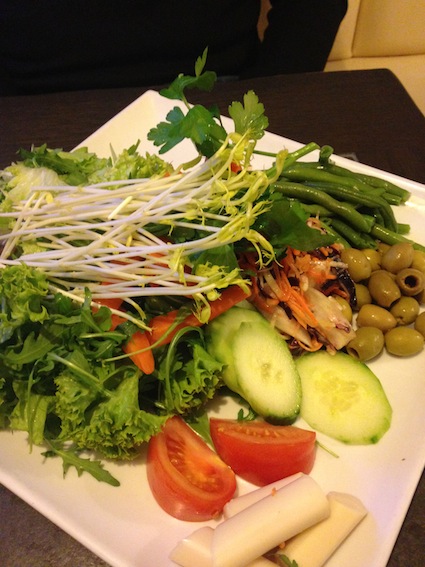 Biggest most amazing salad ever!! No dressing necessary. 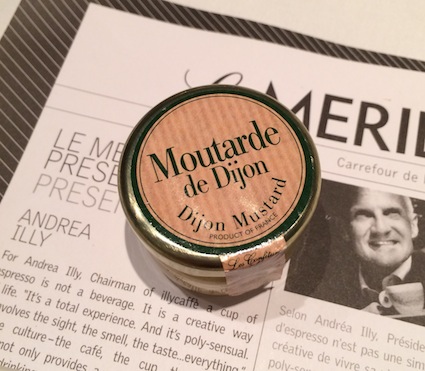 Inside joke:(for those who know me really well, or at least, have figured out my obsession. Yes, I ate this at breakfast!) 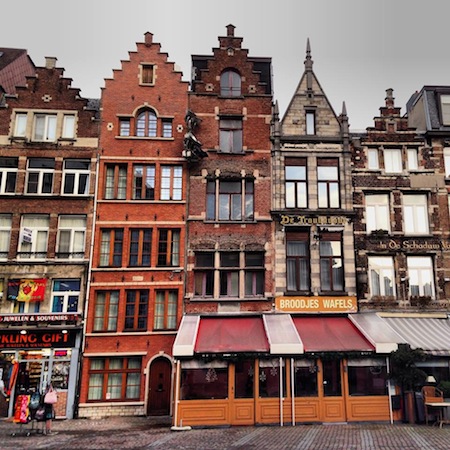 Finally, as promised! Before I left L.A. I posted this picture online and several of you asked me to list each item line by line. (I've blogged about what to take when traveling before along with other tips for traveling and eating at least a dozen times before -- so check out my previous posts out for more info! Click the "travel" label to the right of this post). Here's the list (with links!) of what I packed for this trip. I must reiterate that there are so many other options, I just didn't take that much on thistrip. Please see the other links for full lists. 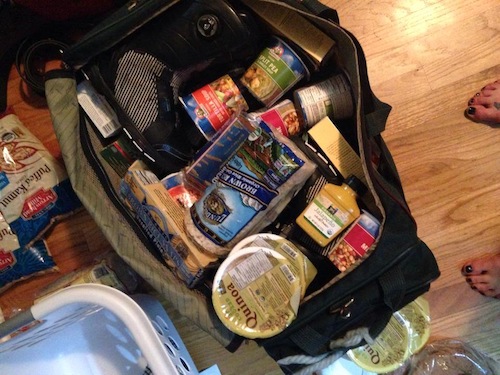