Minimalist Monday: Can you ever really "Start Over"? (Finding peace with yourself) 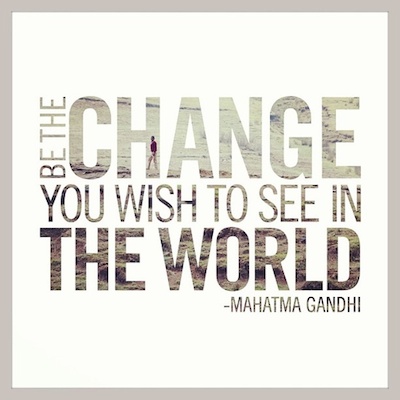 A friend of mine posted this on Facebook the other day:

"Sometimes I really wish I could trade my life. Start somewhere new. Have that chance to do it all over again. But then I wonder if it would be worth it. If I would be doing it for the right reasons."

I know I've felt that way in the past (multiple times!) and if I'm entirely honest, it's one of the reasons why I went to college so far away from home where no one else from my High School would be going.

Of course I had other reasons for going to school there, but moving away and "starting over" were a huge driving force behind my decision.

I wanted to start over. Start fresh.

There's that old saying that you can't "run from your problems" because they eventually catch up to you, and that is kinda true. I guess it depends what problems we're talking about.

What I ultimately realized is that you can't ever really start over, or start fresh, because you're always still you and everything that has ever happened to you.

And history repeats itself.

When I left home and moved away to college I had all these fantasies about how my life was going to be -- how *I* was going to be. I was going to start fresh and have that "do over." I would finally have things go the way I wanted them and be free of all the mistakes I'd made in the past.

"It would be better this time," I resolved. "I will do things differently."

And in some ways I did, but for the most part, my life didn't change all that much, only my surroundings did.

The problem was still me. 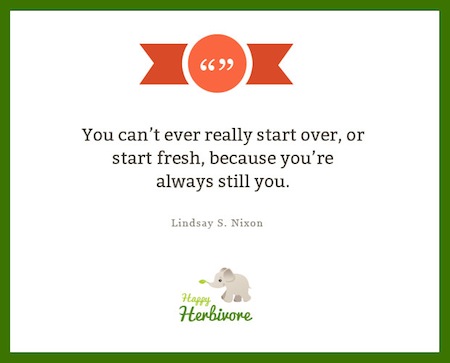 I didn't realize this at the time, but in retrospect I see the beauty in this catch 22.

I replied to my friend's post: "You're always still you, so there never really is a fresh start. That sounds depressing initially, but it's empowering when you realize this means you can start improving, and can by changing the current situation immediately. It starts and ends with you. Step by step, block by block."

When I looked at the things that were different -- what HAD changed in my life, it was because *I* had changed -- not my surroundings.

After college I moved to Boston, another place where I didn't know anyone. And as with college, I had an attraction to that mirage gift of "starting over" in law school, except there was this one thing -- my boyfriend, now husband, was coming with me. So I couldn't *really* reinvent myself... not in the ways I'd imagined before college.

And yes, history repeated itself.

In some ways my life changed, but for the most part it was only my surroundings that were different. Again.

Interestingly, I found trying to be someone different was very exhausting.

Giving up meant I was just myself, which explains why my life fell back into it what it had always been -- *I* had not changed.

Ultimately I realized that to change my situation I had to change -- and not TRY to be someone else, but actually BECOME someone else.

(And that is really hard).

It's a marathon, not a sprint, but you can change who you are, and that will change your life.

I like to say "your actions have you match your words... and your desires."

I am not the woman I was five years ago or even one year ago. I am calmer, more poised, less angry, less competitive, less of a hot head, more outspoken, more zen hippie, and more fashionable.

These were all things I sought after and I worked toward them. I'm still working toward them. My practice of each has been different, but for better or worse, that's what I wanted. I wanted to manage my anger, I wanted to go with the flow and be happy, I wanted to dress more fashionably and look good (what? I'm not afraid to admit that!), I wanted to speak up more and not fear my own voice would hurt what I've worked for, I wanted to find balance in many arenas, and so forth.

I'm still a work in progress, but by working to BECOME this person, to be my best self, I have greatly improved my life.

My life IS changing.

My life has changed.

All because it was *I* who changed.

My surroundings have changed too (I move and travel often), but the places I go aren't start overs. I'm changing myself independent of my surroundings.

And the very first thing you have to do is find peace in that. Find peace that you don't have to move somewhere or breakup with somebody or lose 25lbs or do any other thing first. You might very well decide to do these things later, but right now, nothing needs to change except you.... and if YOU don't change, neither will your life.

And you only need to make a small change -- like committing to whatever change you seek.

About a year ago, a friend of mine made a comment that while she still loved her husband, they didn't have the kind of relationship you see in movies. She wanted that "all-encompassing" kind of love. She wanted that kind of romance where they couldn't keep their hands off each other and were so in love people around them wanted to barf. (her words!)

Several months later, my friend and her husband were over for dinner and I couldn't believe the PDA. It was like having teenagers in my house. They were so in love it was sweet.

Of course I was so happy for them, but also want to know what happened, what changed? Did they go to therapy? My friend said, "I decided to start living the marriage I wanted instead of waiting for it to happen... and it happened."

I found this fascinating, and brilliant. There were some relationships in my life that I wished were different, and so I tried this. It worked!

I started living the life I wanted. I wanted to be the kind of person who goes to yoga several days a week... so I went to yoga.

I wanted to be the kind of person that holds their temper in an argument, so I started counting to 10 before speaking.

I wanted to be the kind of person who buys the homeless man a sandwich instead of pretending I don't see him... so I buy homeless people sandwiches. (and I keep granola bars in my car with $5 rubber banded around them to toss from my car when I see homeless people with signs at all the LA highway off ramps).

Little by little I changed myself, and my life, and my relationships by just doing what I sought.

BUT first I had to find peace with myself and that it all starts and ends with me.

Gandhi got it right: Be the change you wish to see in the world. **

**note: Technically this quote, while popularized, wasn't said by Gandhi. Researchers think the quote we know today evolved independent of Gandhi, but comes from this original quote by him:

"If we could change ourselves, the tendencies in the world would also change. As a man changes his own nature, so does the attitude of the world change towards him. … We need not wait to see what others do."