Minimalist Monday: Slow Down (I Need to Take a Breath, Stop the Race) 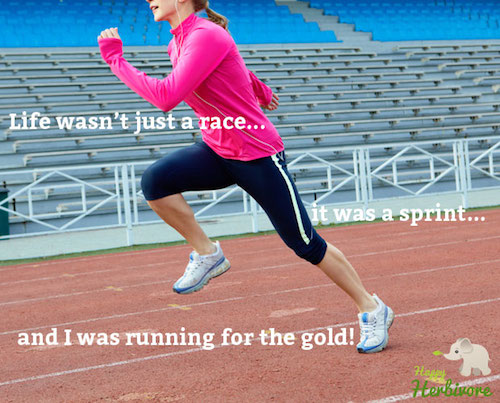 If you've ever been around me, you're probably nodding your head reading this.

I tend to be quite... energetic.

I wasn't always this way (I used to drink 10 cups of coffee per day before I was plant-based... and I was still groggy and fatigued), but it's how I am now.

I also have OCD. I find people generally associate repetitive hand washing or other "cleaning" behavior when they hear "OCD" and that's not me. That's not what I have.

Mine is more of a drive-productivity-perfectionist type (and it's really hard to put into words).

I'm an overachiever I guess.

I really stunk at taking a hiatus earlier this year...

When I first moved to Charleston, South Carolina (for college), I felt like I stepped into molasses.

And I was going out of my mind.

I think at one point I called my parents and begged them to let me transfer to NYU.

They probably told me slowing myself down and learning a new culture was good for me and to suck it up. (And if they did, they were right).

I learned how to "slow my roll" as my friends joked.

But then I graduated and moved to Boston to go to law school.

My go-go-go was back in full-swing.

I stayed true to my intensity in Boston, and then in LA, and then I found warp speed when we moved back to NYC.

I was thriving in my fast-paced environment. Life wasn't just a race... it was a sprint... and I was running for the gold!

Then Scott's job was transferred to a small island in the Caribbean.

I so wish I could draw... but since I can't... I'll use this image by hyperboleandhalf:

The island was also French. Well half French, half Dutch, but the European lifestyle, and the Caribbean lifestyle were there... andblossoming together.

Straightaway, our shower was broken. The plumber said he'd be by first thing in the morning which (as I found out) meant 10am. Around noon he left to take a lunch break and came back after 2pm. Then he left at 4. As he was walking out the door I asked if my shower was working...

He said no, it was still broken so he'd be back tomorrow.

I picked my own jaw off the floor.

I didn't even have words.

But... (!) I got used to it. (Perhaps a little too much because for a year post-island-living, I couldn't be on time anywhere...)

I slowed my roll. again.

Friends and family would visit from the states and their skin would start crawling -- "I can't believe dinner took 3 hours!" "How many times do I have to wave before they'll bring the check?" "OMG. We've been here an hour and no food!"

All island-like I'd lean back and say, "What's the problem? It's the Caribbean... slow down friend," with an arm pat. "Have some rum!"

And then my friends' eyes would pop out. Especially if they were from NYC :)

I wrote about these experiences in greater detail when I was still living there, and I encourage you to check out those posts:

Eat to Live vs. Live to Eat

Anyway, I came to appreciate the slower lifestyle. I stopped rushing. I stopped racing. I just... savored.

And then I moved back to the United States.

Of course I wasn't aware of this.

A few months ago we had some work done in our kitchen. Problems recently presented themselves so I called the contractor in a tizzy, asking him to come take a look at the problem.

It was later in the day, so he asked if he could come first thing in the morning. I reluctantly agreed, but truthfully, it could wait.

(and Dorothy knew she wasn't in Kansas--err the Caribbean, when the contractor showed up at 7:30am lol)

Scott answered the door and I was in the kitchen waiting to point the problem out. I could hear them making small talk, so I burst out into the hallway and started blabbering on about all the problems.

The contractor, who was European, started to smile and laugh a little.

This same scenario happened once before -- well not the same, I didn't have a broken kitchen, but I was busy spouting off a problem when the person helping me (in Europe) said "You're being very American!"

I took offense, until I realized it wasn't a jab, just an observation that as Americans, we are very go-go-go!

Back to the kitchen: I could feel my cheeks flush.

"Yes, I'm sorry. I should have started with hello. Hi."

I realized whatever slowness I'd adopted... I'd lost.

Why was I racing through my life?

Why was I always on the go-go-go?

What's the point of success if you can't enjoy the perks that come with it?

One huge change that came with living abroad is that I no-longer shove food in my mouth. I try to enjoy it. I stopped dashboard dining and desk dining. I take a break to eat my sandwich.

A breakthrough moment for me in my therapy for OCD involved my going on and on about how busy I was to my therapist. Ihad a million bazillion things to do! How am I supposed to sit down and relax?And of course I had anxiety -- look at all this stuff I have to do and no time to do it!

My therapist said to me, "Do you know how to be less busy?"

He laughed. "No make yourself un-busy."

I stared into space. WHAT?! Make myself un-busy?

But yes, that's it. That's really it. Just stop being as busy. Say no. Smell the roses.

Life will go on.

I had to stop treating life (and my to do list) like a race because there really isn't a gold medal at the end... and when I think about the finish line, the real finish line, I don't want to hurry up to get there.

I also don't want my life to be a flash before my eyes---a blurry whirl swirling by because I was racing so fast. I want to remember and see all the beautiful landscape my life has to offer.

Slow the heck down, HH.

I became a minimalist, in part, because I wanted to work less. I wanted more time and money for the things I loved.

I have lost sight of that too often -- a testament that I'm still on my own journey.

I accepted I can't do it all.

(and I admit what I can and cannot do).

I've reorganized and reexamined my priorities.

The goal with minimalism isn't to be unproductive. Minimalism is about making the most time possible for the things that matter most.

For me that means being as productive as possible when I work... but it also means that I work less.

I have to work less.

It means that I have to slow down.

Most importantly, sometimes I have to answer a really hard question:

What am I going to stop doing?