Minimalist Monday: Minimalist Hobbies (and How to Organize Them!) 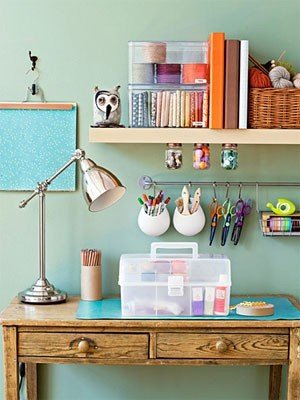 "I liked the comment/response on minimalist hobby storage. Maybe you could focus a Monday post on minimalist hobbies (just one or two?) or the minimalist way for hobbies or storage or something. I have several hobbies that I phase through cyclically, and I have 'stuff' for each one. It would be interesting (and maybe inspiring) to hear how to minimalize hobbies."

You may also recall from Jim's guest post that the stuff he had from his interests and hobbies were the hardest for him to deal with when he was minimizing and downsizing. Jim wrote: "One of the most challenging aspects was getting rid of items related to my hobbies. I love computers and technology, so I had containers upon containers of electronics.."

Hobbies, while very healthy to have, can quickly become a source of mess, chaos and stock piling. Yes, you can be a minimalist and have a hobby. Or several hobbies. Remember, there is no strict set of rules for how to be a minimalist and it is a journey.

However, your hobby should be something you engage in regularly.If you have a hobby and all the "stuff" for your hobby is largely unused in a box collecting dust somewhere, you might want to reevaluate. Perhaps this is no longer a hobby and you should consider purging and donating, since you clearly favor spending your time in other ways. That's okay, don't feel bad about it — we can change our hobbies and what makes us happy. 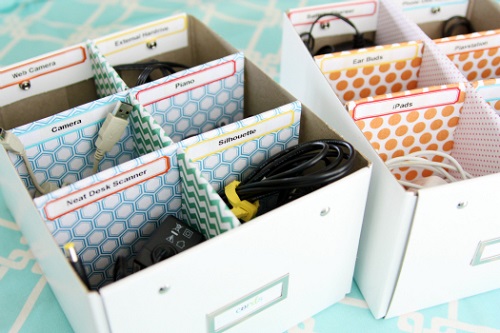 I love snowboarding, but I can only do that in the winter. When the season is over, I pack up all my winter sports stuff into a large duffle and store it in the garage. There's no need for it to be in my closet or in my drawers, getting in the way when I'm looking for something else — something more seasonal.

My snowboard "lives" under my bed. Around Thanksgiving, I'll pull my board and clothing out, give them a wash and a tune-up, so I'm ready when the snow comes, but for now, they're all neatly tucked away. Out of sight, out of mind.

My other hobbies include dance, movies, and French. I have a small amount of dance clothes, and I keep them folded in a drawer with my other "workout"-like apparel. My French lessons are on my iPod, except for the book, which is on the bookshelf. I watch movies online (Instant Video). A true minimalist I suppose, my hobbies don't require a lot of "stuff."

Scott, however, is into computers and electronics (like Jim). We had two large boxes full of this stuff, plus more all over the house. It was making me crazy, so I came home one afternoon with a smaller storage bin and told him he could fill that with his "things" and that was it. Scott argued with me — "but these things are still good and useful" — which I didn't deny, but they're not being used in a box. Let's give them to someone who can use them, I insisted. So we did. The small container really contains Scott, too. He knows if he wants to add to his container, something else has to go. His electronics and wires stopped multiplying. They were like rabbits!

I can't stress containers enough — contain your hobby!A friend of mine is into scrapbooking and she gave herself a small area for her scrapbooking. Before long it had multiplied and spread out all over the place. It was a mess and she couldn't find what she was looking for her and husband was getting mad that her things were all over the guest room. She called me for help. 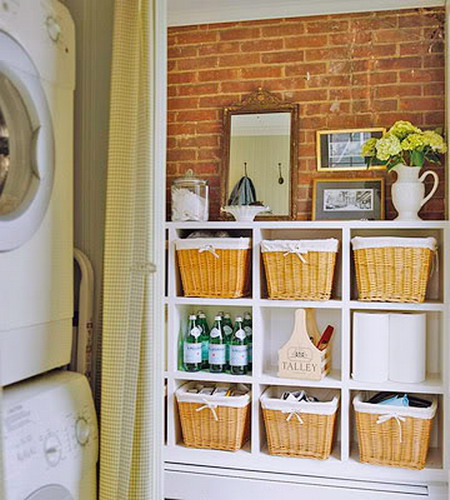 I told her to buy a few containers and contain her scrapbooking items within those containers.Containers prevent spreading. Having to put things in the containers also made sure she was holding on to things she really wanted.She wasn't just stock piling because she "might" need it. For example, she had a huge stack of stickers and papers that she'd been holding on to for several years. "I just don't like it all that much," she told me, "but I thought I might use it eventually, so I held on to it." I encouraged her to give it to one of her friends from her scrapbooking group. She did — they loved it!

A friend of mine that is into knitting, etc. has all of her items well organized in specialty containers. She knows exactly where everything is. It's not a mess, and it's well contained. It's also not causing clutter in her home.

You can also repurpose items you already have, like mason jars, to help get yourself organized.

My favorite approach is baskets — because it's "out of sight, out of mind"

Even when your stuff is "contained," lots of containers can still make a room feel chaotic. Having it tucked away in baskets (out of sight out of mind) is much more zen — and minimalist looking! 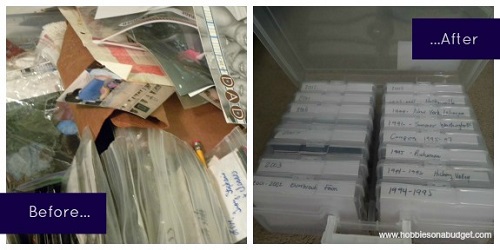 Here are some great organizing hobby ideas from the web:

10 Organization Problems Solved (All You)

Organizing Made Fun (tons of ideas on this one, and a search bar!)

What are your tips for minimizing/organizing your hobbies?