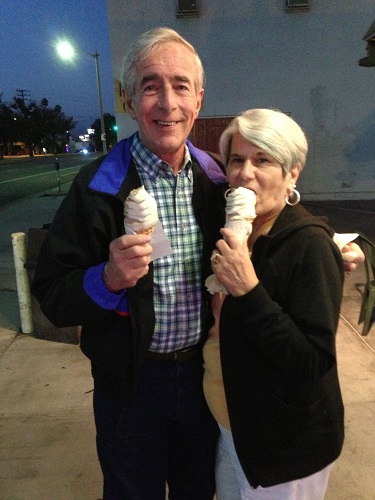 My parents (or Mama & Papa Herbivore as they are known on the blog) came to visit Scott, the pugs & I in LA last week. It was so wonderful to have them here!

These are some the family portraits and moments from their visit! 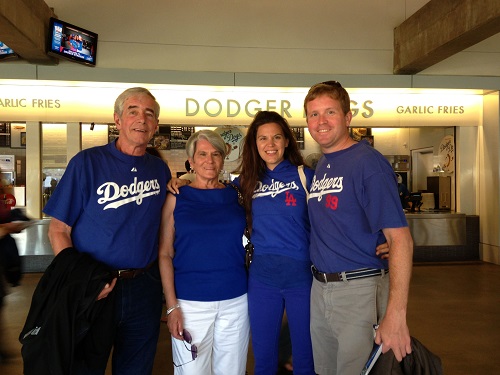 We took my parents to a Dodgers game and what a thrilling game it was!

The game started out somber. The "other team" scored several runs right away and the Dodgers held strong at 0. I even started to feel bad I'd dragged my parents there for such a slow game where our team was going to lose.

Several innings later, the Dodgers picked up a run, and then another one, but the "other team" had picked some up too. I'll be honest, it was looking pretty sad. Half the stadium had cleared out and gone home... we'd stayed because my Dad wanted to see the fireworks show after the game. Then the Dodgers announced it was too late and they were canceling the fireworks because of neighborhood restrictions. I slinked down into my seat hoping my Dad didn't hear the announcement.... and then magic happened!

The Dodgers turned around in the bottom of the 9th and won the game!!! It was unbelieveable. My mom turned to me and said "Did they just win? Did that just happen!" One of the best games I've been to in my life (up there when the Red Sox won the World Series... I was living in Boston back then. Maybe I'm good juju ;) lol). Just goes to show you you can't ever give up. It's not over until... it's over. 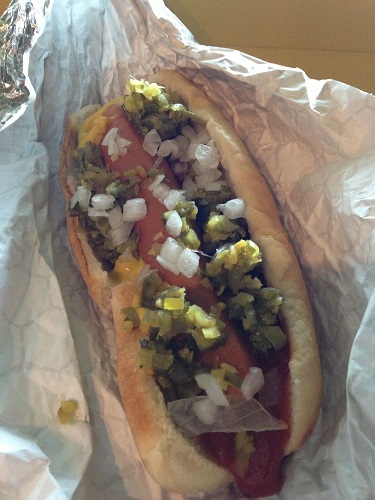 My parents were also most excited about eating a vegan hot dog in Dodger Stadium. Since going plant-based, my parents haven't really liked faux meat substitutes, unless it was something they made themselves from scratch, which in a way is great — the more whole foods, the better! But they both expressed disappointment in how it would be nice to have a treat once in a while on special occasions. I'm not a huge fake meat and fake cheese eater, either, but I do love the novelty of having a vegan hot dog in a ball park once or twice a year. I assured my parents they would love it — if for no other reason than the novelty, and I was right. They loved their vegan ballpark hot dogs! My mom even said "Why can't they sell these in stores? This I'd buy." I told her it was ballpark magic. Sort of like how pizza just tastes better in New York. Maybe it's the water ;)

To piggyback on Friday's post, Applaud Progress, It's Not All or Nothing, I think it's wonderful that so many ballparks (and pro parks for other sports) are offering vegan hot dogs and vegan hamburgers, etc. now. Nearly every stadium is on board — you can seethe full list of vegan-friendly stadiums here. 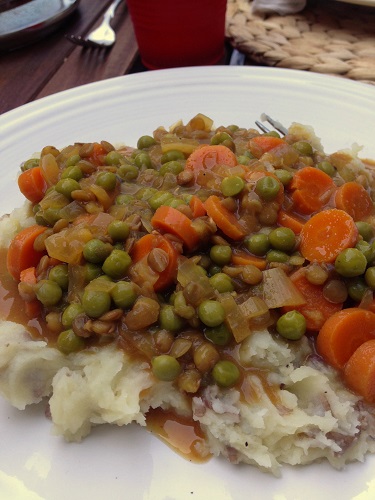 Here's a recipe from my upcoming book, Happy Herbivore Light & Lean. My parents loved Shepherd's Pie in their pre-Herbie life, so I took their visit as an opportunity to whip up this super easy and fast, perfect for a busy weeknight dish. It freezes beautifully too, but sadly we had no leftovers! Everyone had seconds :)

I also took my parents for Frozato, which is a whole foods (no oil) plant-based vegan soft serve made from sweet potatoes and cashews. It's sold here in LA at all the Hugo's Tacos (taco stand, not restaurant) locations. My mom talked about it for days. 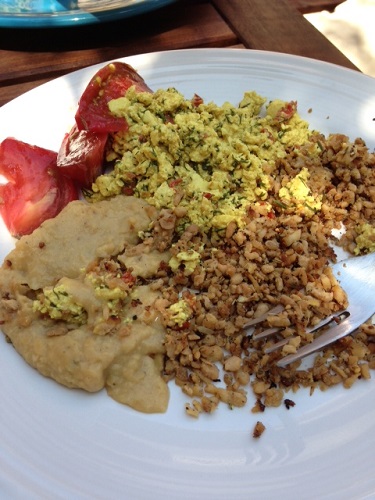 I also hosted a weekend brunch with my parents, and a good friend of the family, who now lives in LA, but lived on our street in Florida when we lived there during my childhood. Of course the menu was full of HH recipes including White Bean Gravy and Tempeh Sausage Crumbles from EHH, plus Sundried Tomato and Dill Tofu Scramble, heirloom tomatoes, and waffles from HHA that aren't pictured... 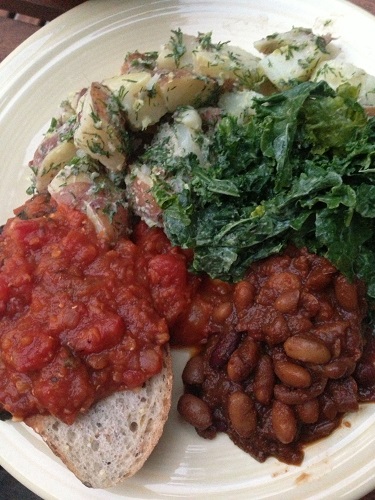 More food: My parents final night here, I had another par-tay and whipped up several other recipes from my new book, Happy Herbivore Light & Lean for my parents, and friends who came by to see my folks (like my best friend, Jim). I also made the Potato Salad and Baked Beans from HHC because they are my parent's absolute favorite. (Pictured above is a Marinara Sauce from L&L and a Kale Slaw from L&L). 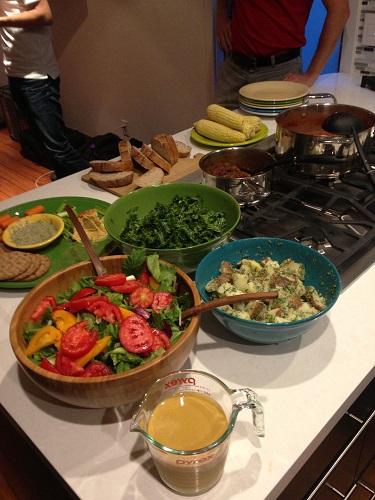 More pics of the buffet line! My parents also had heirloom tomatoes for the first time on this trip! (see the salad).

And yes, that hump of goodness with claw marks on the green plate is what remained of my fat-free (nut-free) cheeseball in the HH Light & Lean. It had only been there for about 2 minutes! My Golden Dressing (you'll be hooked) also from the new book is front and center. (I think I'd drink that dressing if no one was watching.) I also have a bowl of the low-fat ranch dressing from the past meal plans next to the cheeseball. YUMmm! 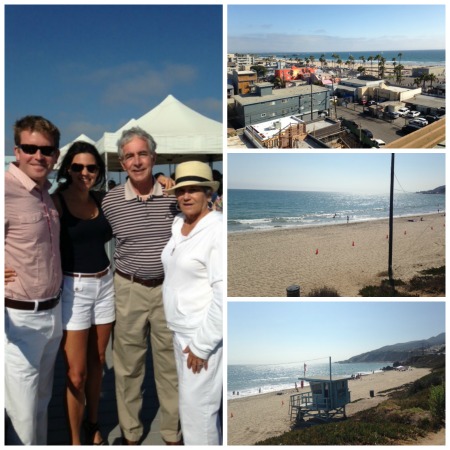 I also took my parents to Malibu and Santa Monica, but I think they were most excited about riding in a convertible!

Alas, their visit was much too fast and I miss them already :)

My parents also did make a point to tell me how much they loved you Herbies several times during their visit. They always read and participate on HH's Facebook page, but they really appreciate all the support you've given them the last 18 months they've been plant-based! I'm going to bug them to blog more regularly on here, too!

Love from the Herbivore family! xoxox